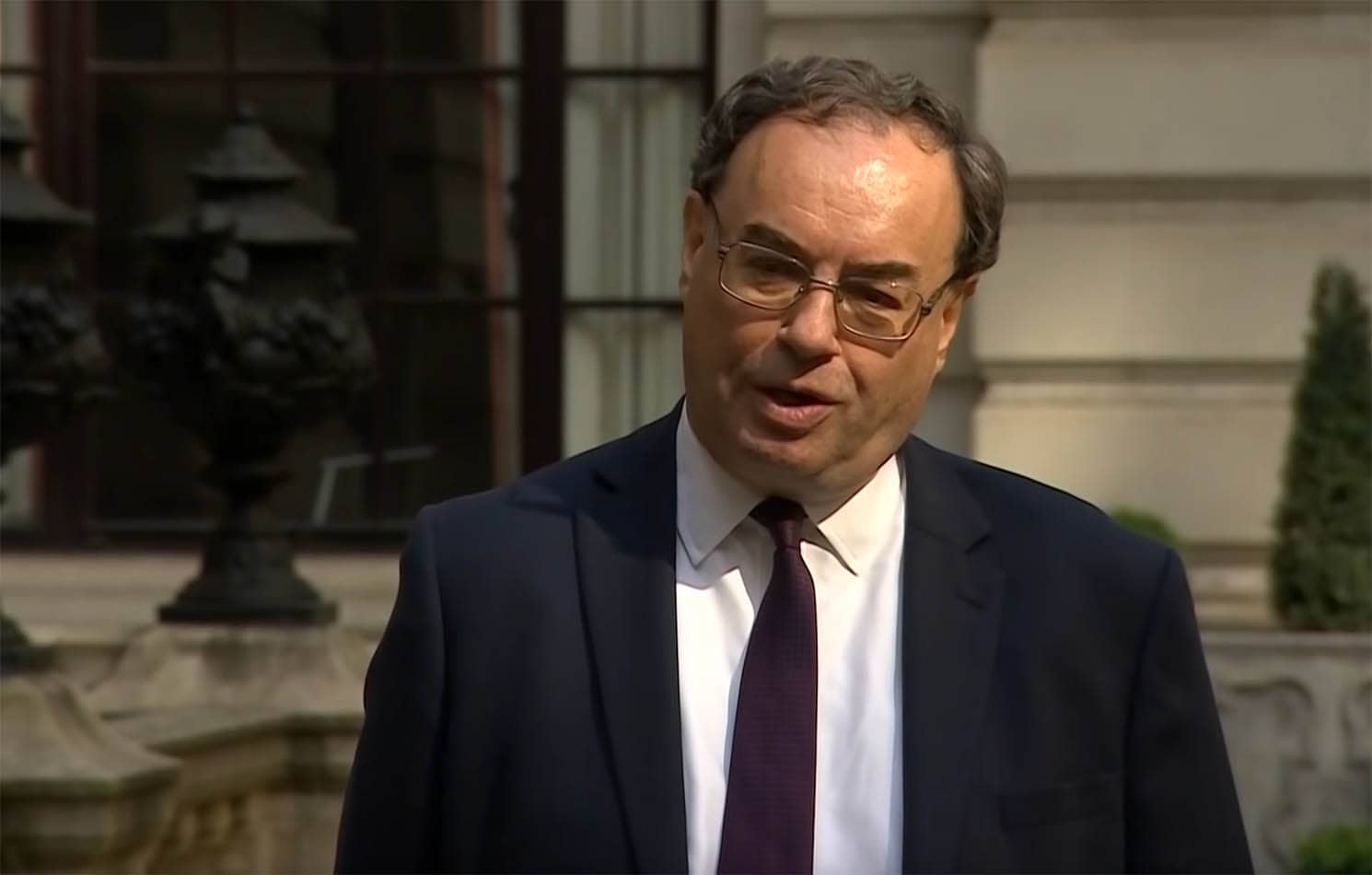 Making a fresh effort to condition the market for interest rate rises Bailey says the most appropriate tool to cool rising inflation would be via higher interest rates.

In a speech to the Society of Professional Economists Bailey says that the inflationary pressures being experienced by the UK are likely to be transitory in nature, but he flags increasing concerns that they become more persistent than previously anticipated.

"The monetary policy response, if we need to make one, to the inflation pressure should involve Bank Rate not QE. There is no reason to beat about the bush on this point," says Bailey.

Just last week the Bank of England delivered something of a surprise to markets when it said it could raise interest rates before it ended its quantitative easing programme.

At the time economists questioned why even mention this.

But fast forward to today and it is clear that this is was by no means a throw-away comment.

Bailey said the Monetary Policy Committee were unanimous in assessing that the stimulus to monetary policy enacted in response to Covid would need to start to unwind at some point, "that unwind should be enacted by an increase in Bank Rate, and if appropriate would not need to wait for the end of the current asset purchase programme". 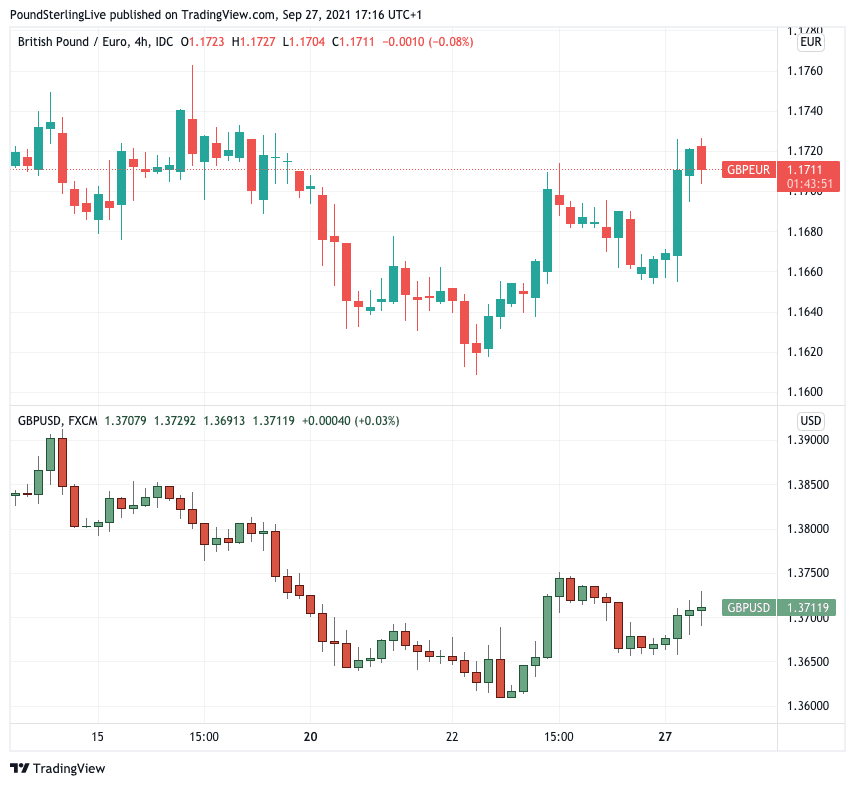 Quantitive easing is scheduled to end in December, thereby making the prospect of a 2021 interest rate rise possible.

"The BoE meeting ... confirmed that change in outlook, and if anything the risks to the first hike now appear to be skewed even earlier, with the MPC explicitly 'ruling in' rate hikes this year, even if that seems fairly unlikely," says Michael Cahill, an analyst with Goldman Sachs.

The Pound's strength betrays investors' expectations that the UK might be seeing greater inflationary pressures than neighbours, and an aggressive response by the Bank of England might therefore be necessary.

The currency market's reaction tends to endorse this view given the Pound rises when rate hike expectations increase.

"The Monetary Policy Committee focuses on medium-term inflation rather than transient factors. But if these factors are likely to be more persistent, the committee will step in and adjust monetary policy as needed," says Bailey. 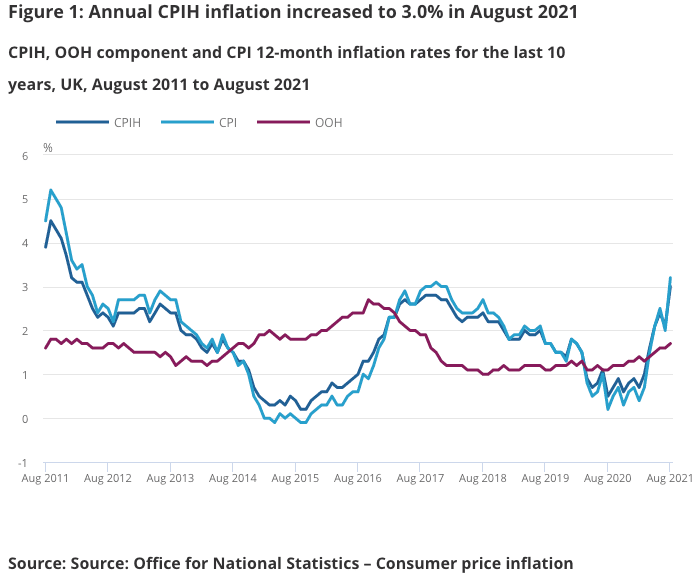 He says that raising interest rates would not necessarily fix supply-side constraints and could therefore prove to be a mistake if rate hikes slow growth.

But he stresses that there is a real risk that inflation expectations amongst consumers and businesses becomes entrenched.

"What is crucial here is whether and how expectations of future inflation respond to these supply shocks, and thereby embed rising inflation," says Bailey.

Expecting higher inflation can change the behaviour of individuals while also impacting pricing behaviour of companies that sell goods and services.

Consumers will demand higher pay while business raise prices, creating a spiral that ultimately has its origins in a supply side shock.

So what was once not initially the preserve of monetary policy setters ultimately becomes so.

"In this way, what start out as relative changes in price levels for some goods and services can become generalised and turn into persistent inflation. I take this risk very seriously, it has form so to speak," says Bailey.

But Bailey sounds a degree of caution over slowing economic growth, which is now under shooting the Bank's own forecasts:

"The rate of recovery has slowed over recent months, and that slowing is continuing."

He says relative to the fourth quarter of 2019, on the latest data to July, the level of GDP was 3.5% lower.

He says that’s around one percentage point below the level consistent with the August Monetary Policy Report.

The culprit for the growth disappointments are supply-chain issues which are broadening out across most sectors of the economy.

"The recovery has slowed and the economy has been buffeted by additional shocks. The switch of demand from goods to services, as Covid has faded in terms of its economic impact, has not taken place to date on the scale expected," says Bailey. 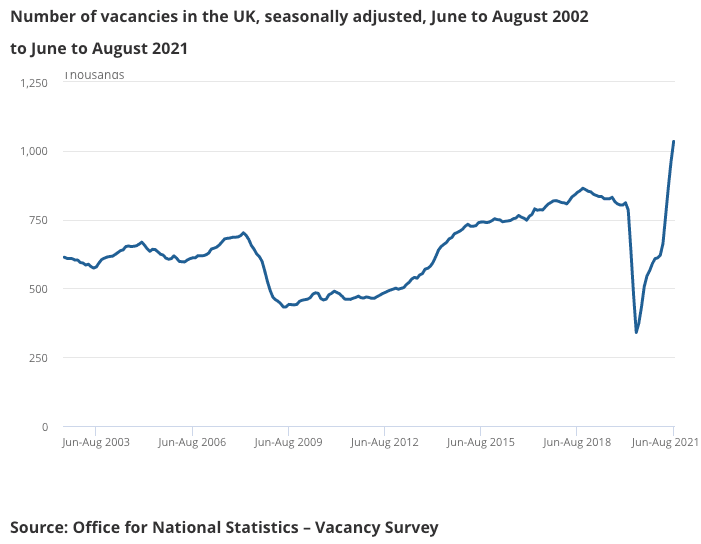 But the ability of inflation to sustain itself at higher-than-expected levels will depend on whether or not wage rises remain elevated.

Bailey reflects that data from HMRC suggests that there were around 1.7MN jobs covered by the furlough scheme in July, which ends this week.

The number of advertised job vacancies was meanwhile at a record level in August of over 1MN.

The number of people unemployed in the three months to July was 186K higher than immediately pre-Covid, and the number of inactive people was 634K higher.

"Now, of course, it is possible to reconcile these numbers, but to do so involves a lot of movement of people from furlough, unemployment and inactivity, in ways not so far seen," says Bailey.

He says if furloughed workers are largely re-absorbed into their old jobs the excess of job vacancies will persist.

And if these excess vacancies are associated with shortages of workers in particular sectors, this may push up on wages.

This would be a hawkish outcome in terms of monetary policy, inviting rate rises and supporting the Pound. 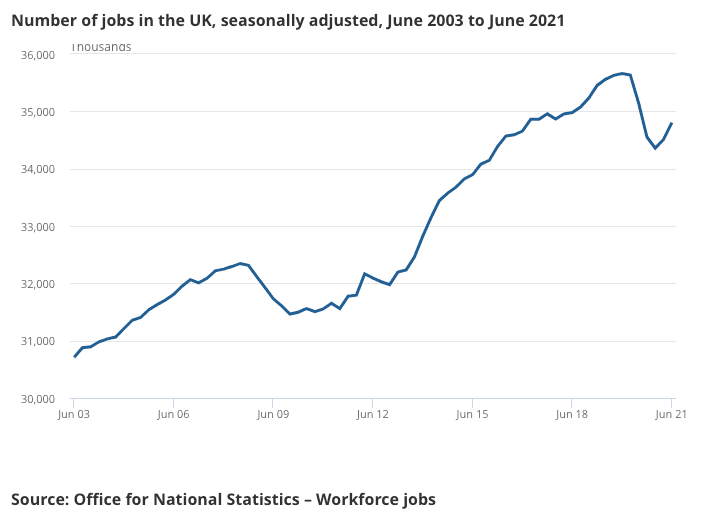 Another scenario sees vacancies as being temporarily higher and above their steady state level in the short-run, as firms anticipate that it will be harder to find workers in the future when unemployment falls.

"In that scenario, demand picks up, the impact of matching frictions in the labour market dissipate over time, and both vacancies and unemployment fall," says Bailey, describing what can be read as a neutral outcome for interest rates and the Pound.

A decidedly bearish outcome would be that the level of advertised vacancies is elevated due to employers overestimating the growth of demand to come just as the speed of the recovery falls off.

"The implications of these labour market outcomes are quite different for growth, inflation, and thus monetary policy, which illustrates the uncertainty we face," says Bailey.

On the matter of pay Bailey sees another puzzle:

Once all the noise is stripped out of incoming data the Bank of England says the rate of growth of earnings is probably around the 4% level – higher than we saw before Covid, and somewhat higher than it would expect to see in these economic conditions.

"But, there is another interesting development. The dispersion of pay growth has risen quite markedly – so for the high numbers we read about, there are also low ones," says Bailey.

The latest set of economic forecasts issued by the Bank showed that in August inflation was expected to rise to 4% by the end of this year, but developments since then leave the Bank anticipating inflation is likely to rise to slightly above 4%.

"The major contributors to the further increase are not base effects but rather the strength we are now seeing in goods and energy prices," says Bailey.

He acknowledges "the pressures are very much still with us, and there is still we believe pass-through to retail prices to come, and manufacturers’ output prices are still rising rapidly".