The Dollar fell against the Pound, Euro and other peers after it was announced weekly U.S. jobless claims rose 351K, more than the 320K expected by market consensus and greater than the previous week's 332k.

Continuing jobless claims now stand at 2,845K, which is more than the 2,650K expected and the 2,714K previously reported.

The data are the latest to confirm the U.S. economic rebound has slowed markedly over recent weeks.

Within the context of Federal Reserve policy expectations - a key driver for the U.S. Dollar - the data will further dampen interest rate hike expectations.

The Euro-to-Dollar exchange rate jumped following the release of the data to record a level of 1.129. 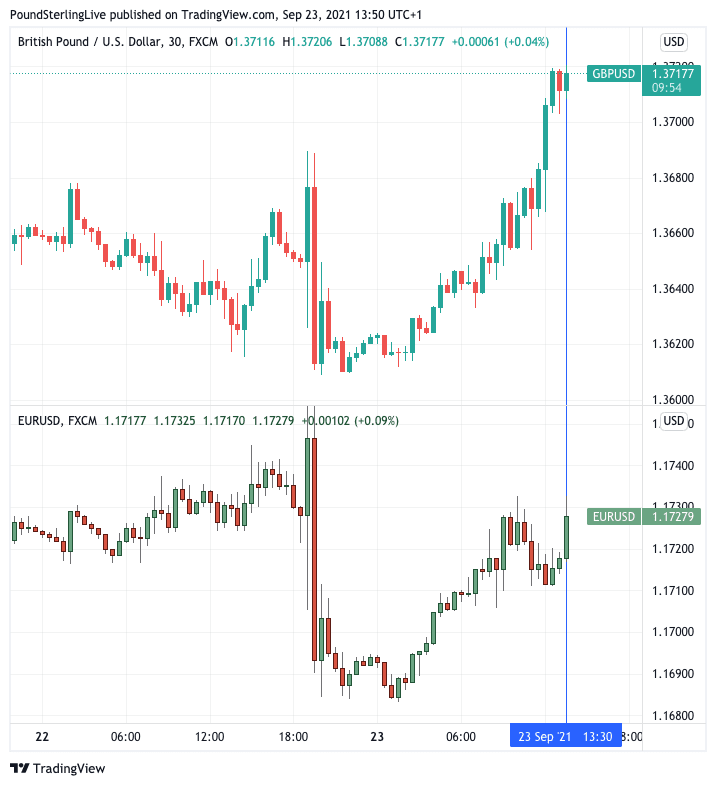 "Claims were boosted by a combination of relatively unfriendly seasonals and, we think, claims triggered by Hurricane Ida but delayed until after the chaos subsided," says Ian Shepherdson, Chief Economist at Pantheon Macroeconomics.

Pantheon Macroeconomics doubt the Delta Covid wave is a significant part of the story, because cases have been rising for a couple months, but claims have declined.

"Instead, hiring appears to have taken most of the strain. The trend in claims likely will continues to fall, slowly, but the seasonals likely will prevent new lows until November," he adds.

The Dollar entered Thursday on the front foot after the Federal Reserve struck a 'hawkish' tone in their midweek policy update, with Chairman Jerome Powell saying the Fed’s quantitative easing programme could end sooner than markets had anticipated.

In addition, guidance from the Fed suggested benchmark interest rates could be lifted earlier than previously suggested.

"This does seem a hawkish shift from the Fed – especially since it was not so long ago that the Fed was telling us that rates would not be raised until 2024,” says Chris Turner, global head of markets and regional head of research for UK & CEE at ING.

The market is now pricing the first rate rise to occur in 2023 with two more occurring in the same year.

But the 'hawkish' Fed story does rely on strong U.S. data releases, therefore Thursday's jobless claims came at a most inopportune time.

Should data releases scheduled for coming weeks also disappoint the prospect of as many as three rate hikes in 2023 will recede further.