The Pound-to-Dollar exchange rate rate is on the cusp of another firecracking rally that will be aided by investors' improving sentiment toward the global economy as well as trade-weighted depreciations of the greenback and the Renminbi.

Pound Sterling fared poorly last week even in the face of robust UK economic data, leaving the Pound-Dollar rate in line for a Monday catch up with European counterparts ahead of a big week for U.S. economic data and the Dollar.

The UK calendar is quiet over the coming days although brighter global prospects are likely to be buttressed by strong U.S. GDP data, which could exact a toll from the countercyclical Dollar.

This would be just before the Federal Reserve (Fed) gives its nth iteration of a decidedly Dollar-bearish policy outlook.

“From this point forward the greenback may face tougher competition. Once the vaccination campaigns in major markets have progressed further we expect FX markets to refocus on the Dollar’s structural negatives,” says Zach Pandl, co-head of global FX strategy at Goldman Sachs.

Trillions spent by Washington this year are likely to mean the U.S. grew strongly last quarter though given the Fed has pledged as part of its average-inflation-targeting strategy to keep interest rates near zero for some time yet, that is unlikely to help the greenback this week.

Instead, Wednesday’s 19:00 Fed policy decision may act as a reminder to investors that the Fed intends to leave interest rates near to zero even as the recovering economy lifts inflation back to and then above its 2% target, which is an outright incentive for dumping the Dollar.

More so given the global economic outlook, which is being bolstered by the strong U.S. recovery, and not least of all because the countercyclical Dollar generally tends to move in the opposite direction of the global economy. 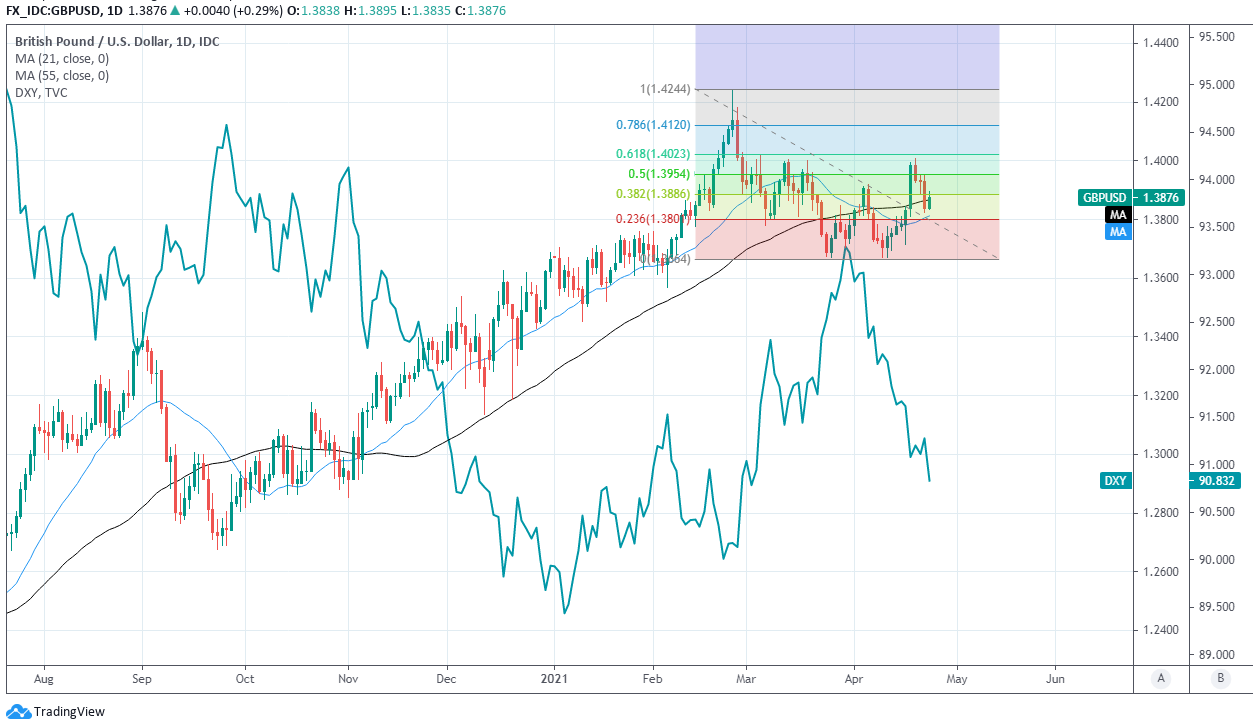 “Sterling still scores as undervalued against the dollar, suggesting GBP/USD should be able to break above 1.4000 (after failing to do so this week) in the coming days without excessive resistance,” says Francesco Pesole, a strategist at ING.

If the global outlook wasn’t bearish enough for the greenback, and bullish enough for the Pound-Dollar rate, the possibly-pending turn lower by the equally-countercyclical Renminbi certainly is given its growing clout in the market and the choice that Chinese policymakers will face.

The FX market is among other things a no man’s land where managed Chinese Renminbi exchange rates meet a bunch of others that spend most of their time floating freely, and it’s arguably the case that many of those managed exchange rates are overdue a turn lower.

“External factors for China’s currency, the yuan, to appreciate are weakening” according to a Reuters report covering remarks made by Xuan Changneng, deputy administrator of the State Administration of Foreign Exchange (SAFE) at the Boao Forum on Monday.

To the extent that China’s State Administration of Foreign Exchange determines an adjustment lower by the Renminbi is warranted, relative to the China Foreign Exchange Trade System (CFETS) basket of currencies, it would be a bearish signal for the greenback.

In the event of any determination to take a timeout from six months worth of Renminbi strength against the basket, reserve managers at the Peoples’ Bank of China (PBoC) would need to decide whether to buy U.S. Dollars en masse or to sell them en masse.

If for no other reason, the reducing importance of the greenback to Beijing and rising relevance of the Euro could mean that the latter is most likely, although the impact that Renminbi depreciation has on other central banks’ inflation targets in each scenario is also likely pertinent here.

“Our long GBP/USD spot position still stands (a high beta version of our EUR/USD upside view), and we view the recent underperformance, caused mainly by higher euro area rates vs UK in GBP as temporary,” says Jordan Rochester, a strategist at Nomura. 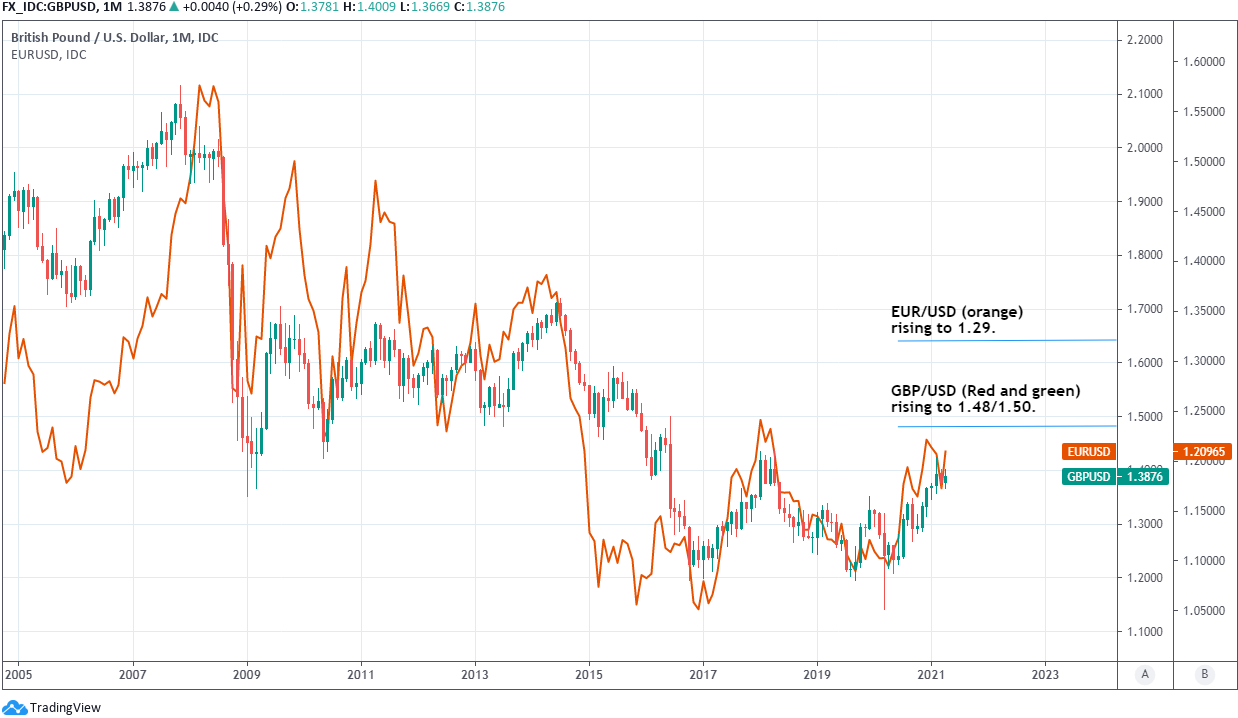 Above: GBP/USD at weekly intervals with EUR/USD (orange).

Much like the Dollar the trade-weighted Renminbi also moves in the opposite direction to the global economy, and is presently completing one of its longest unbroken stretches of appreciation for years, though any PBoC decision to depreciate against non-Dollar currencies would be GBP/USD bullish.

This is mainly because in any depreciation that involves selling Dollars the EUR/USD rate would have to rise further than otherwise in order to lift EUR/CNH, which would in turn be necessary for the trade-weighted Renminbi decline.

The author suspects USD/CNH will fall to April 2018 lows of 6.33 over the next three-to-six months, belying the trade-weighted Renminbi decline playing out in the background while lifting EUR/USD and EUR/CNH to 1.29 and 8.17 respectively.

In addition, through correlation effects as well as a reshuffling of the PBoC’s reserve basket; other currencies would rise sharply helping the Renminbi to depreciate while neutralising much of the trade-weighted Euro pickup generated by EUR/CNH and EUR/USD gains.

A Euro-Dollar move to 1.29 would be a powerful stimulant for the closely-correlated Pound-Dollar rate, which would then have to rise to somewhere between 1.48 and 1.50 over the same period if it’s to lift GBP/EUR to the 1.20 or above that many see as likely this year.

The author thinks that Sterling, aided by a strong rebound in the UK economy and an increasingly upbeat Bank of England, will do that without too much trouble.