The Dollar outlook was burnished Thursday by official data showing inflation rising at its fastest pace since October 2018, which could render Federal Reserve (Fed) rate cuts an even more distant prospect for 2020.

U.S. inflation rose by just 0.1% on a month-on-month basis in January, surprising on the donwside for a market that was expecting a 0.2% gain although the meagre increase in that number came concurrent with a consterning upside surprise for the annual rate of price growth.

Annual consumer price growth rose from 2.3% to 2.5% when consensus was pointing to an increase of only 2.4%. Meanwhile, the more important 'core' rate of inflation also defied market expectations when it held steady at 2.3% in the face of a consensus that had penciled in a decline to 2.2%.

"Core CPI inflation is steady at 2.3%, though we expect it to nudge up a bit over the next few months," says Ian Shepherdson, chief economist at Pantheon Macroeconomics. "Upside risk is confined to the rent and medical components, but they jointly account for 52% of the core so they have to be watched very closely. They are much more important than the prices of TVs and T-shirts." 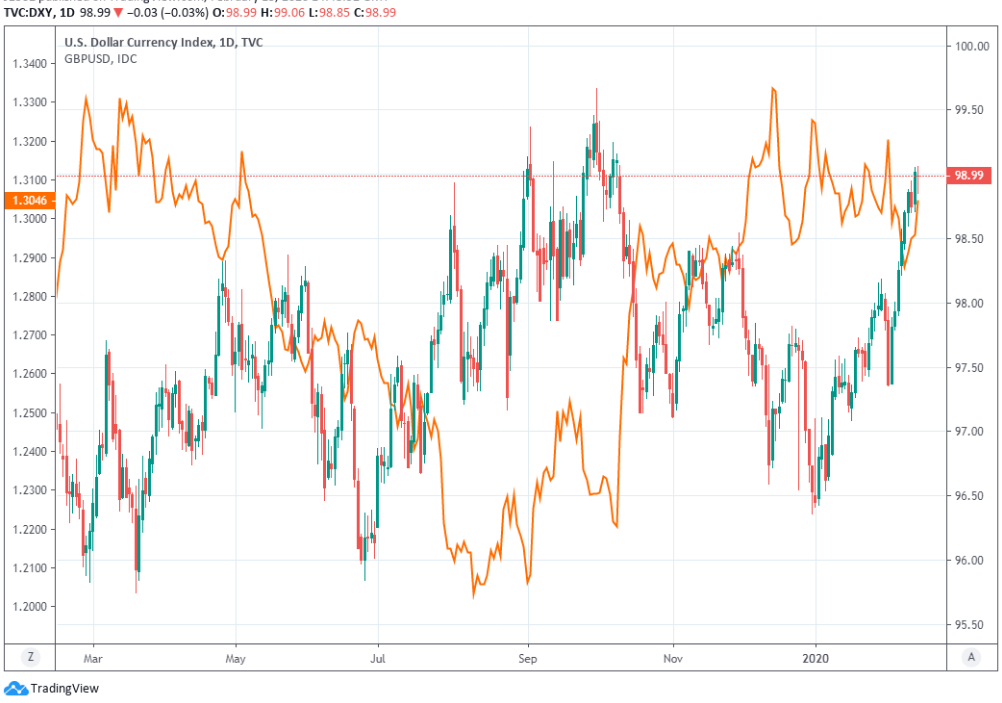 Above: Dollar Index shown alongside Pound-to-Dollar rate at daily intervals.

Thursday's data puts both measures of U.S. inflation further above the Fed's 2% target than markets had anticipated at the beginning of year where Investors have been looking for the U.S. economy to slow as other regions elsewhere in the world experience a gradual recovery. That outlook is supposed to prompt at least one more interest rate cut from the Fed and a steady turn lower by the Dollar relative to many of its rivals, consensus estimates for growth and year-ahead exchange rates suggest.

This is the third year running that a bearish Dollar consensus has been frustrated by an outperforming U.S. economy and underperformance elsewhere in the world, which is increasingly making the idea of additional Fed rate cuts difficult to stand up at the same time as some are beginning to second guess the market's assumption that the European Central Bank (ECB) and other international counterparts are done cutting their own interest rates.

U.S. data has surprised consistently on the upside this year while the economy is generally thought to be less exposed to a Chinese growth slowdown than its European and antipodean rivals, while the official data emerging from the Eurozone has done little other than surprise on the downside. The Italian economy is flirting with a double-dip recession, the French economy contracted in the final quarter last year and GDP data is due out from Germany at 07:00 on Friday.

"Markets are pricing only a 5% chance of easing at the next Fed decision on 18 March, and a terminal rate of 1.20% (vs Fed’s mid-rate at 1.63% currently)," says Tim Riddell, a macro strategist at Westpac. "Both the RBA and RBNZ appear to be comfortable holding steady...We expect two further RBA rate cuts, in April and August, taking the cash target to 0.25%, followed by a small but open-ended ACGB purchase program."

Above: Markets expect more rate cuts from Fed than other central bank, in short as well as long-term. Source: Westpac.

In that kind of environment the Fed doesn't need to raise U.S. rates in order to sustain a stronger Dollar because the current 1.75% Fed Funds rate is already significantly higher than almost all other comparable benchmarks, while rates could always fall further from current levels elsewhere in the world and in the process, impact the already-wide interest rate differentials that act as an incentive for investors to sell other currencies and buy the Dollar instead.

The Euro, Japanese Yen, Swiss Franc and Swedish Krona might be some of the most exposed to an ongoing outperformance of the U.S. economy, while the Pound as well as Australian, New Zealand and Canadian Dollars may be less at risk given bechmark rates that still sit comfortably above zero.

“The EUR/USD is in a downtrend with little to interrupt at present. The US economy has defied recent concerns of a sharper slowdown, and the spreading of the corona virus has given an extra tailwind to the greenback. 2020 is a presidential election year and US President Donald Trump stands a good chance of being re-elected. This would likely result in more USD friendly policies in the form of reflationary fiscal policies and sharper focus on trade frictions,” says Richard Falkenhall, a strategist at SEB. 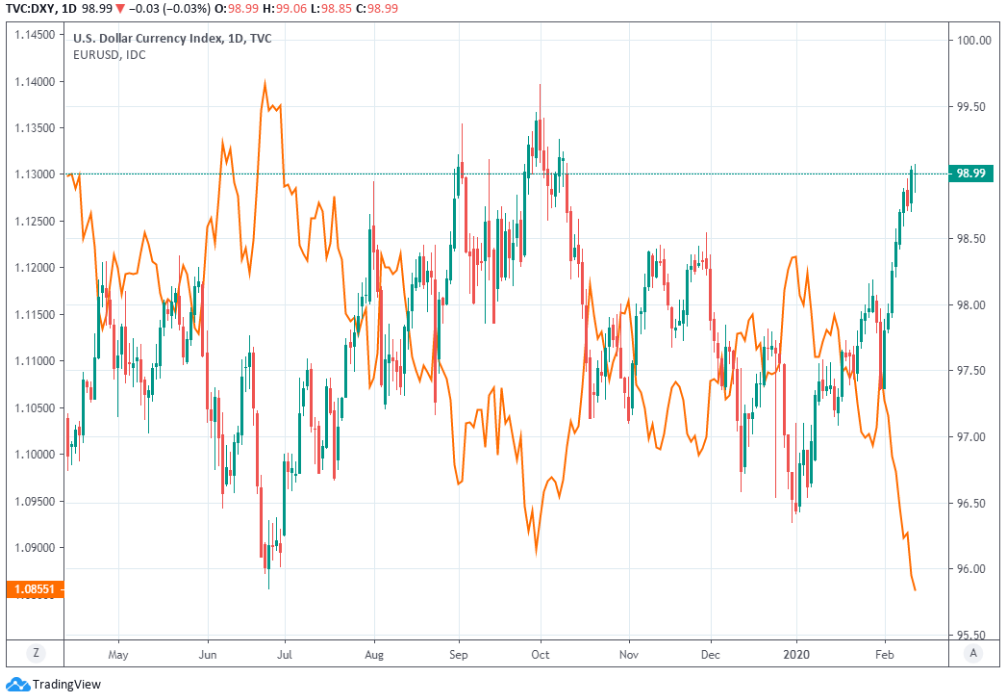 Above: Dollar Index shown alongside Euro-to-Dollar rate at daily intervals.