- But is tipped to rise in weeks ahead at BMO and UBS.

- But October brings risk of renewed volatility and losses.

The Pound-Dollar rate was down in a risk-off market Friday but speculation about Brexit progress is being tipped by BMO Capital Markets and UBS to lift the exchange rate in the weeks ahead, although both firms have warned that fresh volatility and losses could blight the British currency in October.

Sterling was lower against most of its major rivals Friday in a currency market that was trading with a risk-off tone, even as other so-called risk assets advanced on the day. The Dollar was higher against all rivals except the safe-have Yen and Swiss Franc, a classic sign of risk aversion, while Pound Sterling rose against only commodity currencies within the G10 sphere.

However, the British currency had advanced notably in prior sessions following speculation that progress is being made in negotiations between the UK and EU, which has led markets to believe a 'no deal' Brexit may have become even less likely this week. And with investors having bet heavily in August that an acrimonious split was becoming increasingly likely, BMO says the Pound-Dollar rate can rise further in the weeks ahead as some of those wagers are unwound.

"We tend to agree with the FX options market when we see that GBPUSD calls are selling at a premium to puts only as far out as 1M. Beyond that, things look a bit messier as far as the options market is concerned. Part of this dynamic is a Brexit uncertainty story, but we would argue that a large part is also a "sell Europe/buy USD story". We still can't see many sound arguments out there that can undercut this fundamental narrative right now," says Stephen Gallo, European head of FX strategy at BMO. 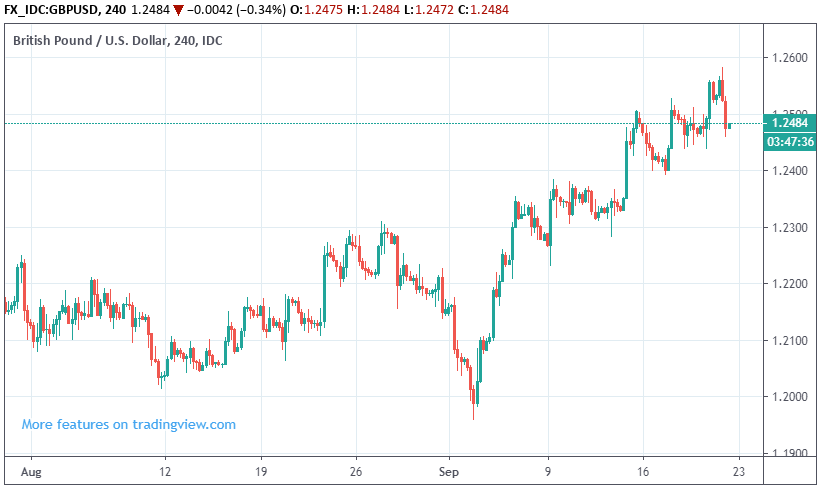 European Commission chief Jean-Claude Juncker was revealed Thursday to have suggested to Sky News that EU officials might be warming toward the UK government's ideas about alternative proposals to so-called Northern Irish backstop in the EU withdrawal agreement. The comments were part of an interview by Sky that is yet to be aired in full and come ahead of an eagerly-awaited meeting between Juncker, Prime Minister Boris Johnson and Democratic Unionist Party leader Arlene Foster next week.

There's now growing speculation suggesting further progress toward an agreement that averts a 'no deal' Brexit on October 31 could be made next week, which is why BMO's Gallo is looking for more investors to walk away from their earlier bets against Pound Sterling. Investors will have to buy back their previously-sold Pounds in order to settle up with their brokers if they want to close out those earlier bets against the currency.

"We think there is probably more upside to come in GBPUSD heading into the end of September, purely on the basis of further GBP shorts unwinding (if nothing else). Either way, we will need to shift up our entire 3-12M GBPUSD outlook curve," Gallo says. "We don't buy the view yet that further appreciation of the GBP will occur in a straight line. But the difficulty at this juncture is that owning 3-6M downside in GBPUSD via options is very expensive. Therefore, the cheaper alternative is to wait for opportunities to fade GBPUSD strength via spot; but picking the right level will be extremely tough."

The Pound was quoted just under the 1.25 handle against the Dollar Friday and is projected to trade somewhere between the 1.15 and 1.30 levels over the coming months, with the exact rate determined by which Brexit scenario is borne out in reality. Gallo says a 'no deal' Brexit would send the exchange rate down to 1.15 but that a second referendum or decision to abandon Brexit entirely could push it up to 1.30.

Most say a 'no deal' Brexit would lead to punishing losses for Sterling, with the Pound-to-Dollar rate tipped to fall below 1.15 and as far as 1.05 , while forecasts of the upside vary wildly for scenarios where a deal is reached or Brexit is cancelled altogether. The next few weeks will reveal which is more likely. 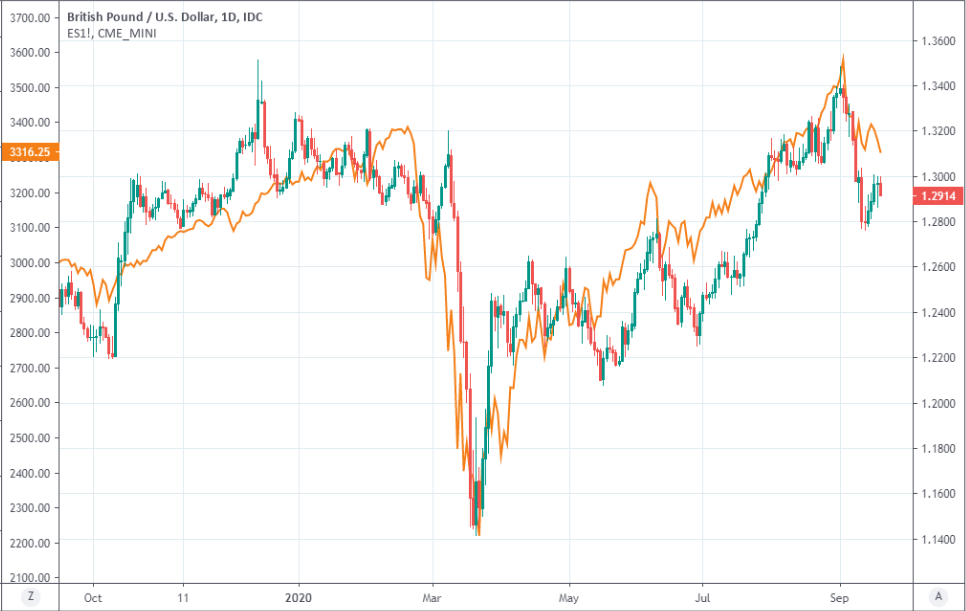 "We are maintaining our view that currently Brexit matters more to sterling than what the BoE is doing. The pound is on an appreciation trend that started two weeks ago, and we anticipate good chances of a continuation of that trend over the next few weeks," ," says Gaetan Peroux, a strategist at UBS. "However, we caution that by October decisions will have to be taken regarding the 31 October Brexit deadline and, possibly, a general election. Depending on those outcomes, risks for the pound could rise."

Parliament is currently suspended and the two sides of the Brexit divide were this week wrestling in the Supreme Court over whether the decision to end the current parliamentary session via prorogation was legal. All of this is taking place as the clock ticks down toward deadlines on October 19 and October 31 that will be key to the next developments in the Brexit process.

Opposition MPs and 'rebels' from within the governing Conservative Party, with help from an apparently partisan Speaker of the House of Commons, successfully hijacked the parliamentary agenda this month and imposed upon the government legislation that requires Prime Minister Boris Johnson to request a third Brexit delay no later than October 19 if an exit agreement has not been reached with the EU up until that point.

If such a request is not approved by the EU before October 31, and a deal not agreed, a 'no deal' Brexit will take place at 23:50 on Halloween. Most analysts say that would lead to further punishing losses for Sterling, and PM Johnson continues to insist that he will not request any extension of the Article 50 period if the talks fail, despite the law recently made in parliament. And irrespective of what happens with Brexit, markets now see a potentially damaging general election as all but inevitable.

"We are overweight the British pound versus the US dollar. While we do not seek to predict the ultimate outcome of the Brexit process, our view is that the FX market has been overpricing the risk of a no-deal Brexit at the end of October. We believe that strong opposition to such an outcome in the UK Parliament is likely to lead to a delay. Recent political developments support this view; UK lawmakers voted for legislation to force Prime Minister Boris Johnson to request a postponement from the EU if he fails to negotiate an agreement. If our base case for an extension to the 31 October deadline proves correct, we expect further upside for sterling," says Mark Haefele, global chief investment officer at UBS Global Wealth Management, in a note to clients Thursday. 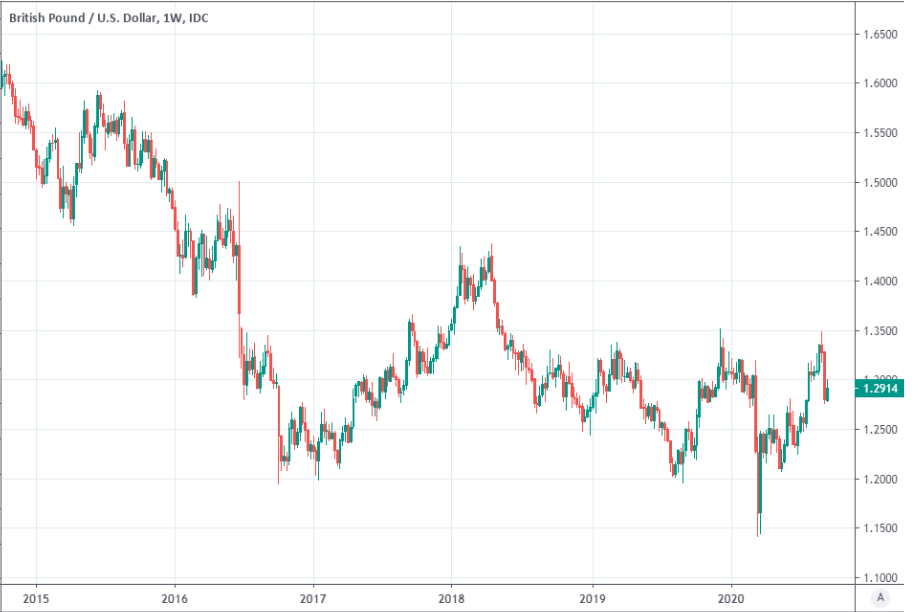