- BoE notes slowing growth and mounting risks, but no plan to cut.

- BoE says Brexit delay means slower growth, but so too does 'no deal'.

- Economists say BoE would cut rates if 'no deal' Brexit happens in Oct.

- UBS says odds of 'no deal' Brexit are inflated, tips GBP/USD as a buy.

The Pound appeared to stabilise against the Dollar and Euro in noon trading Thursday after the Bank of England (BoE) stuck with its long-held commitment to raising interest rates steadily over the coming years.

Bank of England policymakers left Bank Rate uchanged at 0.75% Thursday following a unanimous decision, but reiterated the familiar refrain that rates will need to rise in the event that an orderly exit from the EU is eventually achieved because it would lead to what the bank forecasts will be a "significant margin of escess demand" that subsequently lifts inflation above the 2% target.

This was after the BoE noted that an escalation of the trade war between the U.S. and China has further weighed on global growth and led other central banks to cut rates in order protect their economies from an ongoing slowdown. It also flagged that "shifting expectations" about the outcome of the Brexit process are wreaking havoc on UK asset prices and economic data.

The BoE forecasts third-quarter GDP growth of just 0.2% will follow the -0.2% contraction seen in the prior period and that inflation will now run below the 2% target "in the near term". It also said capacity pressures in the labour market are easing because employment growth is "softening" and that there is now "a margin of excess supply" in the economy, or so-called 'slack', but hinted strongly that it doesn't intend to follow the European Central Bank (ECB), Federal Reserve (Fed) and other institutions in cutting rates.

"Given the drop in GDP in Q2, the fall in core inflation to an almost 3-year low in August and the ongoing Brexit drama, there was never much chance that the MPC would raise interest rates from 0.75% today. And even though the tone of the minutes was slightly more dovish than in August, we do not expect the MPC to follow in the footsteps of the Fed and the ECB and loosen policy unless there is a no deal Brexit," says Thomas Pugh at Capital Economics. "The MPC is a little more dovish about the outlook for inflation and interest rates in the short term than they were in August, but they are still concerned that inflation might rise above target by 2021." 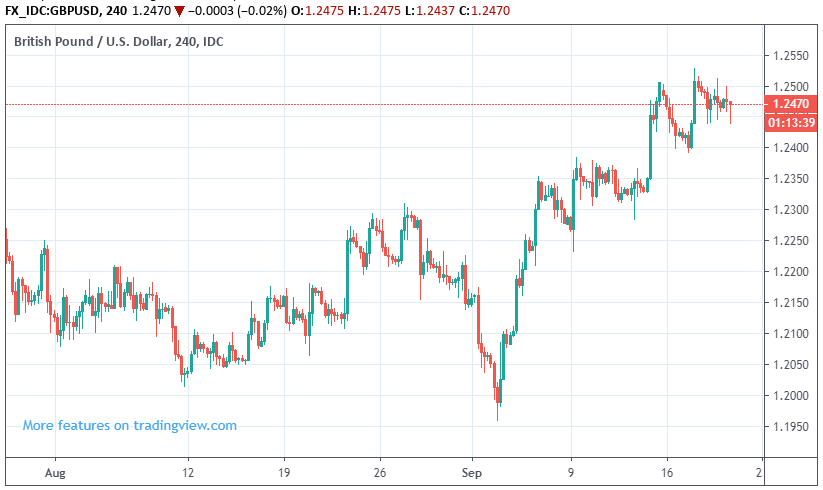 The Pound-to-Dollar rate was quoted 0.13% lower at 1.2452 following the statement, after having risen from 1.2438 before the decision, while the Pound-to-Euro rate was 0.50% lower at 1.1248. The single currency posted a strong intraday performance Thursday while the Dollar was weak across the board. 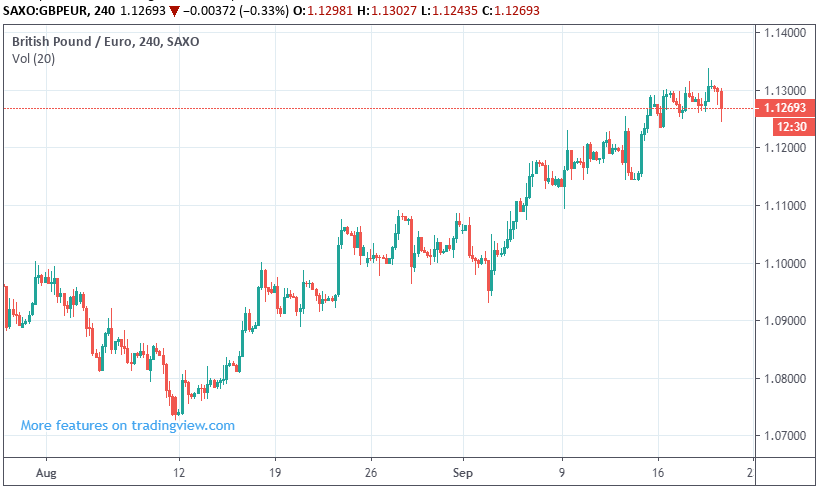 "Even if there were a Brexit deal at the end of October, with inflation well below the 2% target, the MPC is unlikely to feel under much pressure to rush ahead with rate hikes. Indeed, we think that the MPC would hold fire until the second half of next year. If there is a no deal then the MPC would probably quickly change its tune and support the economy by cutting interest rates," Pugh says.

The BoE has said ever since 2017 that inflation is set to test the 2% target repeatedly over the coming years and that rates will need to rise in order to prevent prices running ahead of the target for too long. However, prices surprised on the downside in August and even the BoE now expects the consumer price index to run below the 2% target for a while up ahead.

But the bank is also constrained in its decision making by considerations of what might happen to the Pound in the event that it abandons the pledge, or claim, to be looking to raise interest rates. With that commitment helping to spare Sterling from further losses, most of which have been Brexit-related of late, getting rid of it would risk an inflationary spiral in UK exchange rates that would raise import prices and could end up driving inflation above the target. 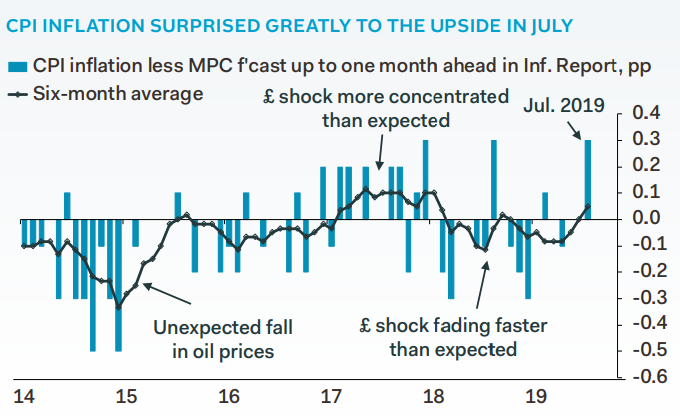 "Minutes of September’s MPC meeting are significantly more dovish than August’s. The summary emphasises that the outlook for global growth has deteriorated and that in the U.K., “a degree of excess supply appears to have opened up within companies” that likely will continue to build," says Samuel Tombs, chief UK economist at Pantheon Macroeconomics. "A case eventually could be made for cutting Bank Rate. The Committee has not formally revised down its forecast for GDP growth in Q4 and beyond, but the minutes certainly give the impression that its base case has changed from one of a Brexit deal being agreed in the near future, to long-lasting Brexit uncertainty.

Inflation pressures are dissipating and the economy is under pressure from political uncertainty at home and an external slowdown in growth abroad. Furthermore, and with no definitive end to the Brexit Saga in sight, the BoE has warned a prolonged period of uncertainty over the shape of the UK's eventual new relationship with the EU will increasingly weigh on growth up ahead.

Taken together and at first glance, those factors should be enough to make the BoE's commitment to an "ongoing tightening" of monetary policy difficult to sustain, but concerns over the inflationary impact of movements in the exchange rate as well as the sheer gulf between the likely states of the economy under either a 'no deal' Brexit and a negotiated exit have so-far discouraged the BoE from adjusting its interest rate stance.

"The Committee still is in wait and see mode and it is not going to take pre-emptive action. If, as we expect, the near-term data surprise the Committee’s expectations to the upside, the MPC will stand pat. In particular, its forecast for quarter-on-quarter GDP growth of just 0.2% in Q3 is puzzlingly low, following July’s rebound; our forecast remains 0.4%," says Pantheon's Tombs. "The Committee still hasn’t been able to agree what the appropriate response to a no-deal Brexit should be...Our view remains that the doves would win out and Bank Rate would be cut to 0.50% in the first meeting after no-deal, 0.25% in the second and 0.05% in the third, but with the Committee split, much will depend on if Mr. Carney has been replaced by then." 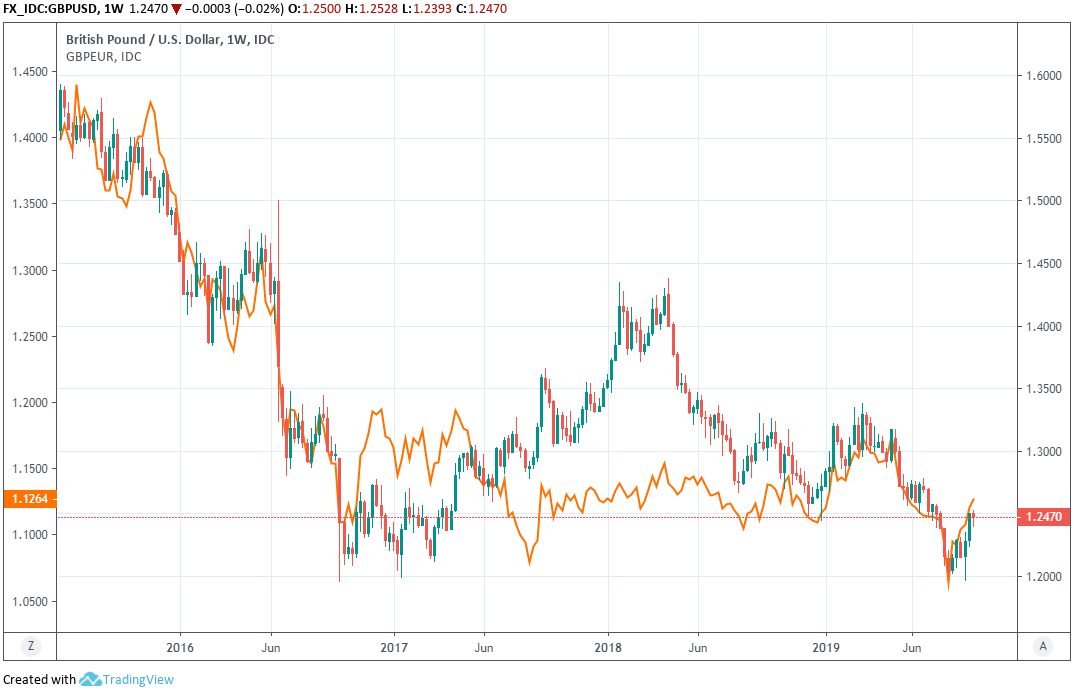 Parliament has been suspended and the two sides of the Brexit divide are this week wrestling in the Supreme Court over whether the decision to end the current parliamentary session via prorogation was legal. All of thise is taking place as the clock ticks down toward deadlines on October 19 and October 31 that will be key to the next developments in the Brexit process.

Opposition MPs and 'rebels' from within the governing Conservative Party, with help from an apparently partisan Speaker of the House of Commons, succesfully hijacked the parliamentary agenda this month and imposed upon the government legislation that requires Prime Minister Boris Johnson to request a third Brexit delay no later than October 19 if an exit agreement has not been reached with the EU up until that point.

If such a request is not approved by October 31, and a deal not agreed, a 'no deal' Brexit will take place 11:50 on Halloween. Most analysts say that would lead to further punishing losses for Sterling, with the Pound-to-Dollar rate tipped to fall below 1.15 and as far as 1.05 while the Pound-to-Euro rate heads toward parity. Both exchange rates are already half way toward those levels, from where they were back in February when a deal looked to market as if it was likely, reflecting a hefty implied probability.

"We are overweight the British pound versus the US dollar. While we do not seek to predict the ultimate outcome of the Brexit process, our view is that the FX market has been overpricing the risk of a no-deal Brexit at the end of October. We believe that strong opposition to such an outcome in the UK Parliament is likely to lead to a delay. Recent political developments support this view; UK lawmakers voted for legislation to force Prime Minister Boris Johnson to request a postponement from the EU if he fails to negotiate an agreement. If our base case for an extension to the 31 October deadline proves correct, we expect further upside for sterling," says Mark Haefele, global chief investment officer at UBS Global Wealth Management.