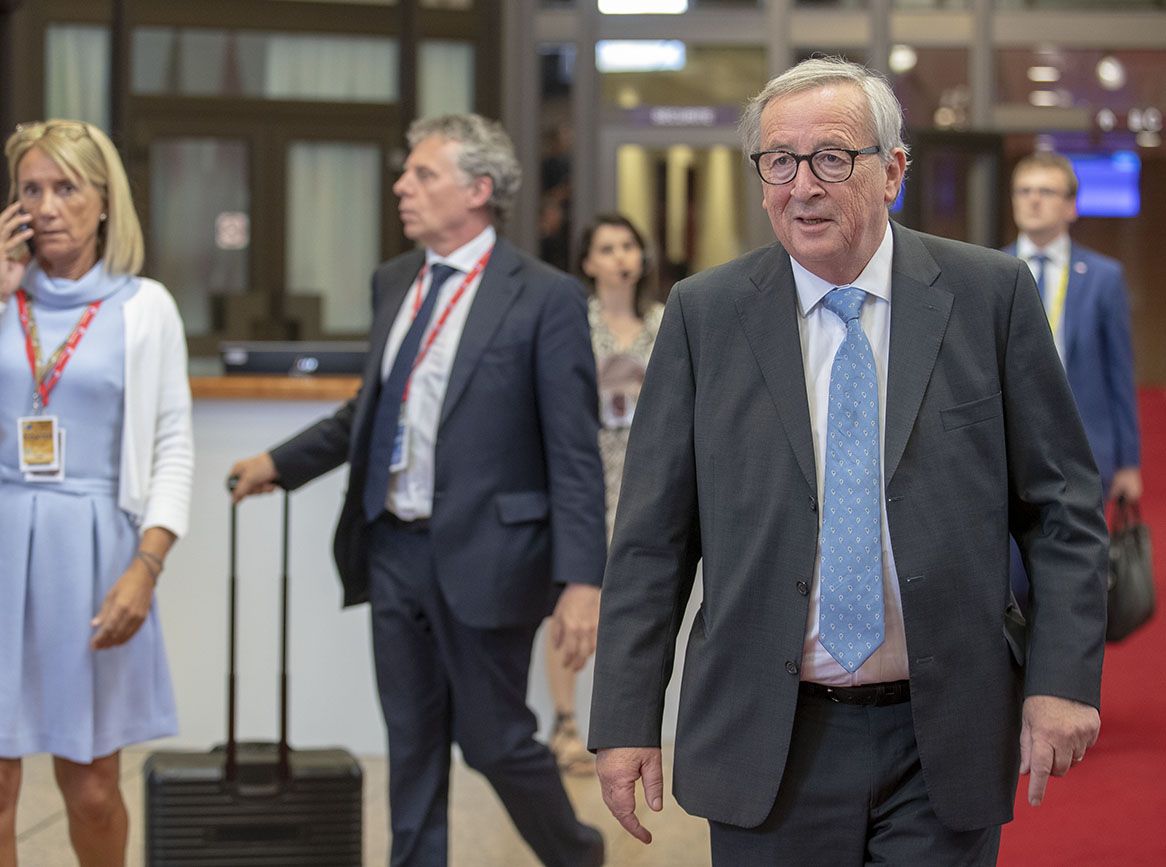 The British Pound is the best performing major currency of the day, week and month, as a recovery built on expectations that a 'no deal' Brexit is becoming less likely extends.

Fresh highs were triggered by European Commission President Jean-Claude Juncker who said "we can have a deal" and "Brexit will happen".

The comments made to Sky News are significant in that Juncker is one of the most powerful figures in the European Union whose comments can often set the tone for other leaders to follow.

Mr Juncker said a 'no deal' Brexit would have "catastrophic consequences" and said he was doing "everything to get a deal".

Junker said "If the objectives are met - all of them - we don’t need the backstop."

Prime Minister Boris Johnson's central Brexit renegotiation strategy rests on the removal of the Northern Ireland backstop, noting the sizeable resistance to the clause in his party and amongst Northern Ireland's DUP whom the Conservatives have a close working relationship with in Parliament. Removal of the backstop could therefore see a deal finally pass through the House of Commons.

"GBP traders will turn their attention back on the news flow from Brussels and London. Comments by the President of the EU Commission Jean-Claude Juncker last evening gave rise to the hope that there is still a chance of reaching an agreement until the end of October which provided some support for Sterling," says Thu Lan Nguyen, FX & EM Analyst with Commerzbank in Frankfurt.

The Pound extended an ongoing recovery sequence on the news with the Pound-to-Euro exchange rate trading at 1.1362 at the time of writing on Friday, its best level in four months: 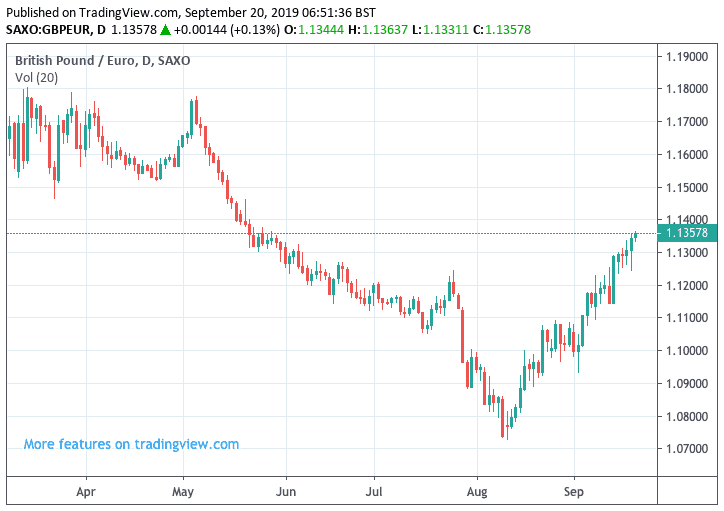 The Pound-to-Dollar exchange rate has extended higher and is at 1.2562 at the time of writing, a two-month high: 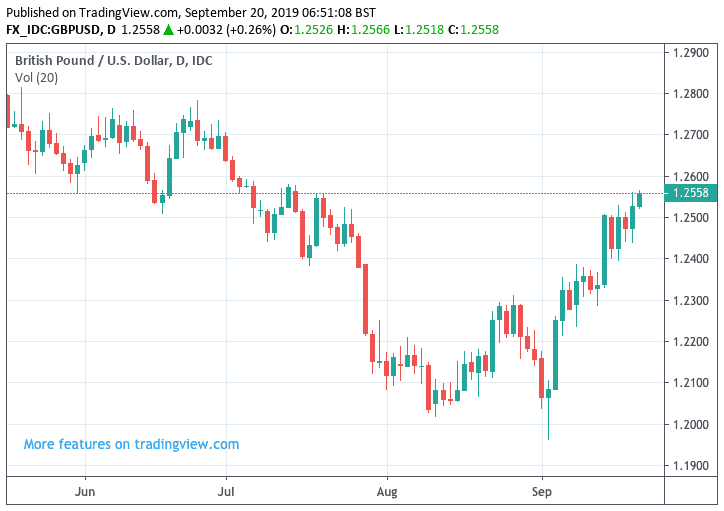 "GBP is this morning retesting highs (1.2560) made late in the North American session on the back of EU Commission President Junker’s comment that “I think we can have a deal” and that he was ready to remove the current Irish backstop if the UK came up with an alternative way of guaranteeing no hard border that is just as robust," says Adam Cole, foreign exchange strategist with RBC Capital Markets.

Cole notes the odds placed on a 'no deal' Brexit at UK bookmakers has fallen to 19%, suggesting the Pound's fortunes rest on how this probability moves.

If the odds of a 'no deal' continue to fall, we would expect the Pound to extend its current rally.

"I was surprised to see GBP at the top of the list this morning," says Marshall Gittler, an analyst at ACLS Global, noting the comments from Juncker to represent "a big change" as only last month Juncker said: "We have made clear that we are not prepared to hold new negotiations on the withdrawal agreement."

Juncker appears to be open to UK suggestions that a 'hard' border on the island of Ireland could be averted by conducting customs and regulatory checks elsewhere and by aligning Northern Ireland with EU agriculture and food rules.

At the same time, the Democratic Unionist Party signalled their willingness to accept a Northern Ireland-only solution to the border issue so long as it didn’t change the region’s constitutional status in the UK.

"This is a subtle change in their position as up to now they’ve insisted that Northern Ireland must leave the EU on exactly the same terms as the rest of the UK," says Gittler.

The analyst sees the potential for further outperformance in Sterling on the developments.

"While an agreement might be possible in theory, it’s not clear whether it’s possible in fact in the limited amount of time that’s left. Still, a market that’s heavily short GBP is likely to pare back its positions on any hint. GBP positive," says Gittler.

Sterling looks set to continue its slight upward trend over the coming days as the likelihood of Britain leaving the EU without a deal is indeed diminishing. FX bargain hunters are already in the starting blocks.

The EU's chief Brexit negotiator Michel Barnier meanwhile met his counterpart Steve Barclay in Brussels today where they discussed "the state of play of the ongoing Brexit talks," according to a statement issued by the EU side following the talks.

Talks appear to have centred on the backstop to avoid a hard border on the island of Ireland and the Political Declaration on the Future Relationship.

Barnier and Barclay agreed that technical talks will continue.

These talks deal with a first set of concepts, principles and ideas that the United Kingdom has put forward.

"It is essential that there is a fully workable and legally operational solution included in the Withdrawal Agreement. We remain willing and open to examine any such proposals that meet all the objectives of the backstop," the European Commission said in a press briefing following the meeting.

New York Meetings Next Step in the Process

However, it could well be in New York that real progress is made, or provides a dose of disappointment.

There are growing signs that the details of a deal could be hammered out when the Prime Minister meets EU leaders at the UN General Assembly in New York next week, which will be attended by Arlene Foster, the DUP leader reports The Telegraph.

Leo Varadkar, Ireland's Taoiseach, said he would be meeting Johnson in New York "to try to get a deal", adding that "the mood music is good". We find Varadkar's comments alone to be constructive for Sterling, as much rests on the Irish position.

And another notable piece of information for currency markets is that Stephen Kinnock, the Labour MP, said on a visit to Brussels that up to 30 of his colleagues were prepared to rebel against Jeremy Corbyn and back an agreement negotiated by Johnson.

This is a further positive sign that the Prime Minister could actually get a deal through Parliament.

Barnier spoke with Kinnock and fellow Labour MP Caroline Flint. Kinnock told BBC's Newsnight that they left feeling "relatively, cautiously optimistic" after the Brussels meeting because of mounting pressure on the PM.

While the Brexit pendulum might be swinging back towards 'deal', what recent months have taught us is that it will likely swing back in the other direction.

It is therefore not surprising that some analysts remain wary of Sterling suffering a reversal in fortunes.

"While the comments continue to fuel optimism, there is still a long way to go and it would only take a negative comment to knock the pound back in the current less liquid environment," says Robin Wilkin a cross-asset strategist with Lloyds Bank.

Caution might therefore be warranted and we urge those watching the market to not become overconfident in their expectation of ever-higher levels in Sterling.

"We suspect markets have partly overreacted to the comments, especially considering that the main EU countries involved in the negotiations (France, above all), have not shown a similarly optimistic tone of late," says Francesco Pesole with ING Bank in London. "We continue to see the chances of a new Brexit deal as limited, which leads us to believe that the rally in sterling may be short."