The value of the New Zealand Dollar briefly spiked on the release of hotter-than-forecast inflation numbers, which are the main event on the currency's calendar this week.

The Pound-to-New Zealand Dollar exchange rate slipped quite sharply to 1.9341 amidst a sudden bout of NZD strength after it was announced by Stats NZ that inflation for the first quarter of 2018 read at 0.5%, higher than analyst expectations for a reading of 0.4%. 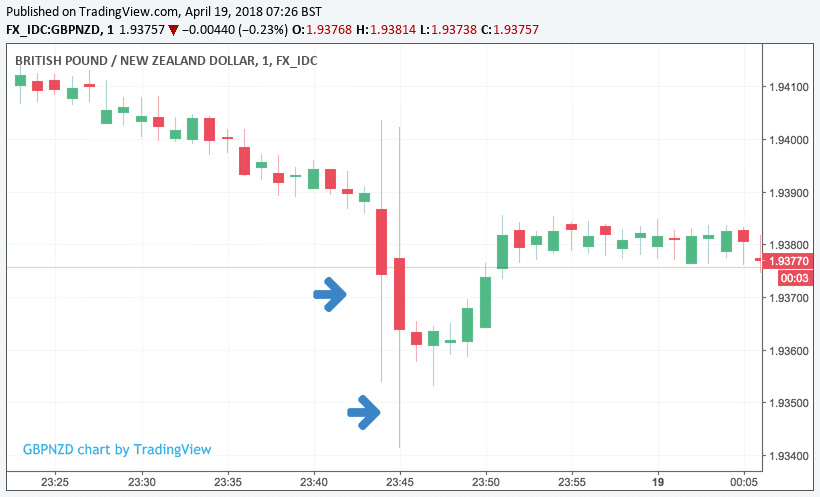 Above: Volatility in GBP/NZD at the time of the release of New Zealand inflation numbers.

The thinking goes that rising inflation will ultimately pressure the Reserve Bank of New Zealand into raising interest rates which in turn bids the currency higher as global capital flows into the country seeking out the higher yields offered by rising savings rates.

However, digging into the data traders realised that there might not be too much to get excited about, for now at least, and the New Zealand Dollar quickly gave up its advance against the Dollar, Pound and other major currencies.

CPI was +0.5% and in annual terms came in as per RBNZ expectations at +1.1%, which forms the bottom end of the 1%-3% target the RBNZ is looking to achieve.

Low inflation has understandably put a lid on expectations for higher New Zealand interest rates for some time now.

Factoring in base effects (after food prices rose sharply in Q1 last year) and the fee-free first year of education, and this set of data doesn't leave too much to get excited about.

"That said, even excluding education, annual CPI fell from 1.5% to 1.3% and core inflation dropped from 1.1% to 0.9%, the first time core inflation fell below 1%/yr in 2 years. So it does appear as underlying CPI is softening in NZ," says a note from global investment bank TD Securities following the event.

TD Securities warn momentum is starting to work against the New Zealand Dollar and a softer CPI print "should amplify the downside in the interim" and the lower-end of their estimates argue for support in NZD/USD to lie near 0.71.

The RBNZ has now held its cash rate at a record low of 1.75% ever since November 2016 and, according to pricing in interest rate derivatives markets, is not expected to raise it from here until well into 2019.

This is while other central banks, including the Federal Reserve, Bank of Canada, Bank of England and European Central Bank have all either raised interest rates already in recent times, or are expected to do so over the coming quarters.

Accordingly, bond yields elsewhere in the world are now or will soon be on the verge of overtaking those of their New Zealand counterparts. This is a problem for the Kiwi Dollar because without a countervailing response in the domestic market, international capital and speculative money may soon shun New Zealand assets in favour of better returns elsewhere. That would be almost certain to mean weakness for the New Zealand Dollar.

Developments on this front will be key to determining the trajectory for the New Zealand Dollar during the months ahead.

Only a change in Reserve Bank of New Zealand monetary policy can prevent this from weighing on the Kiwi Dollar over the medium term, which appears unlikely given the bank remains hamstrung by a series of government-led reforms to its mandate and operating practices. It also has a new governor, Adrian Orr, who assumed the helm at the end of March. Very little is currently known about his policy views.

What we do know now is that inflation is unlikely to prompt any shifts in policy anytime soon.