The New Zealand Dollar is forecast to trade on the defensive against its developed world rivals in 2018, according to ANZ Research, now the Reserve Bank of New Zealand’s new mandate has been signed off by the government and incoming central bank chief Adrian Orr.

Monday saw Finance Minister Grant Robertson and incoming RBNZ governor Adrian Orr sign a new Policy Targets Agreement, which requires central bank monetary policy to foster maximum levels of sustainable employment alongside stable and at-target levels of inflation. Beyond full employment, the RBNZ target is to keep inflation within the 1% to 3% range and at 2% over the medium term.

“This policy mandate is broadly in line with those in the US and Australia. Although policy rates (and now mandates) in these economies are currently very similar, the policy outlooks are quite different. The RBNZ does not expect to increase interest rates until 2019, whereas the FOMC increased rates last week and expects two more hikes this year,” says Sharon Zollner, chief economist at ANZ Research, a division of Australia and New Zealand Banking Group, New Zealand’s largest lender.

There were concerns in the run-up to last year's general election that the New Zealand Labour Party's desire to change the RBNZ mandate would come at the cost of higher inflation. Currency markets were of the opinion that this would happen because a dual mandate would see interest rates remaining 'lower for longer', which would also translate into a weaker currency.

"This is not a radical overhaul of the PTA as the 2% mid-point remains as a key objective, and the RBNZ already considers the state of the labour market when assessing the stance of monetary policy," says Annette Beacher, chief Asia Pacific macro strategist at TD Securities.

Since the election markets have come to view the revised mandate as making little difference to the long term levels of inflation and interest rates. The mandate will come into effect Tuesday 27, March when governor Orr starts his term at the helm of the RBNZ.

"Not surprisingly, the Governor-Designate gave nothing away this morning," Beacher adds, referring to a press conference featuring the incoming governor Adrian Orr on Monday. "So clearly he is approaching the role with a neutral stance and an open mind. We need to wait for the May 10 OCR Review and Monetary Policy Statement for a clearer vision of RBNZ forward guidance under Orr. We'll be looking out for speeches in the interim as well."

New Zealand's government also said Monday that it will also legislate later in 2018 to enable the Reserve Bank to move from its current rate setting model to a committee based decision making model. At present, discretion over interest rate decisions rests solely with the governor of the RBNZ although Monday’s statement from the finance minister flags that this is likely to change once into the early days of 2019.

“The Government has agreed a range of five to seven voting members for a Monetary Policy Committee (MPC) for decision-making. The majority of members will be Reserve Bank internal staff, and a minority will be external members. The Reserve Bank Governor will be the chair,” says Grant Robertson, New Zealand’s Finance Minister. “It is my intention that the first committee of seven members would have four internal, and three external members. Treasury will also have a non-voting observer on the MPC to provide information on fiscal policy.”

Nevertheless, the reforms and other economic factors are seen keeping Kiwi interest rates on hold at their record lows long into 2019, at a time when other central banks are beginning to withdraw stimulus from their economies by dialling back post-crisis quantitative easing or raising interest rates. This should keep the New Zealand Dollar under pressure longer-term. 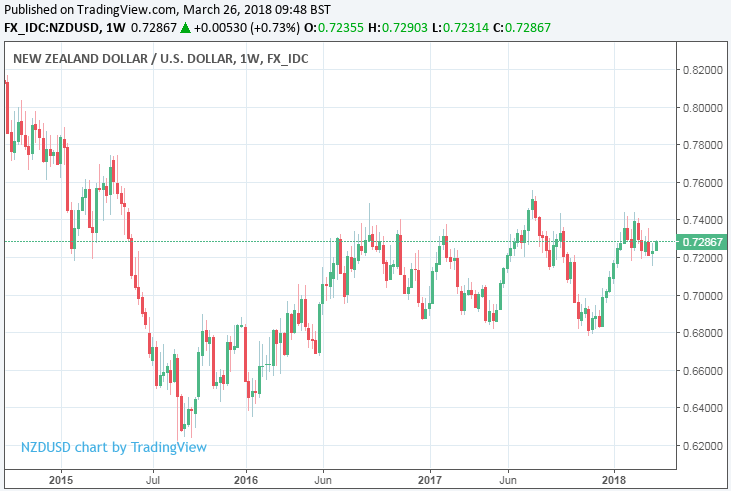 The New Zealand Dollar appeared to take the new mandate in its stride, enabling the Kiwi unit to follow other risk currencies higher during early trading in London Monday. The NZD/USD was quoted 0.91% higher at 0.7286 while the AUD/NZD rate was 0.09% lower at 1.0624. The Pound-to-New-Zealand-Dollar rate was 0.21% lower at 1.9454. 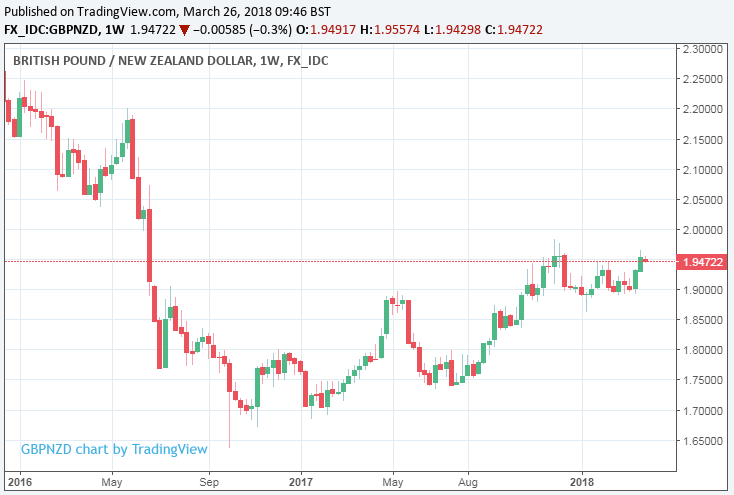 “The RBNZ believes that the labour market is currently running just a smidgen over maximum sustainable employment. Accordingly, it forecasts inflation to increase, albeit slowly. In its February MPS, the RBNZ forecast headline inflation to reach the target midpoint of 2% in 2021, after some temporary weakness due to one-off factors,” says Zollner.

ANZ Research forecast that New Zealand inflation will not reach the 2% midpoint of the target range until June 2019, which means talk of an interest rate rise is unlikely much before then. New Zealand inflation fell from 1.9% to 1.6% in the final quarter of 2017, leaving the annual rate below the RBNZ’s own forecast for inflation of 1.8%.

“Market pricing for policy in New Zealand is similar to that in Australia, with about a 30% chance of a hike priced for both by year end. Given the similar policy outlooks for the RBA and RBNZ, we expect the NZD/AUD to keep muddling along,” says Phil Borkin, a senior macro strategist at ANZ Research.

The Federal Reserve is on course to raise interest rates by a total of three times in 2018, although analysts and markets more broadly are increasingly looking for signs that a fourth rate hike may be likely. This contrasts markedly with the situation in New Zealand.

The Reserve Bank of New Zealand has held its cash rate at a record low of 1.75% ever since late 2016, when it cut the rate from 2%. Pricing in interest rate derivatives markets, which enable investors to protect themselves against changes in interest rates while providing insight into expectations for monetary policy, implies a New Zealand cash rate of 1.99% in May 2019. This suggests few investors expect a change in New Zealand monetary policy anytime soon.

“The NZD remains high relative to the USD, but we think it will be put on the defensive in 2018. As discussed in our Market Focus on the 12th of March, commodity prices are currently supporting the NZD. But interest rate differentials with the US and decreasing global liquidity suggest depreciation may be only a matter of time,” Borkin adds. “And any bouts of risk aversion are also likely to send the NZD lower. That consideration appears to be getting more relevant as 2018 progresses.”

ANZ Research forecast the NZD/USD rate will fall to 0.67, down from 0.72 Monday, before the end of 2018. They also predict the Pound-to-Kiwi rate will rise from its 1.94 level on Monday, to 2.12 before the year is out. This would put Sterling at its highest level against the Kiwi since before the Brexit referendum of June 2016. The Pound-to-Kiwi rate traded in a 2.0 to 2.50 range during the year leading up to the 2016 vote on EU membership.