The Pound-to-New Zealand Dollar exchange rate starts the new week in the red, having traded down to 1.9463 after being seen as high as 1.9641 last week. It appears an improved tone to market sentiment is helping the New Zealand Dollar as well as some beneficial domestic data.

Despite the decent start to the week for the antipodean currency, our technical studies suggest Sterling is likely to hold the overall advantage with the GBP/NZD exchange rate could be in the process of breaking out of what was thought to be a triangle formation last week.

In the end, it did successfully break out of the triangle and rallied up to a peak of 1.9642 before stalling and consolidating - it is currently trading back down at 1.9527.

The upside target for the triangle breakout is 1.9800, so the exchange rate has not reached that yet, but it is expected to. 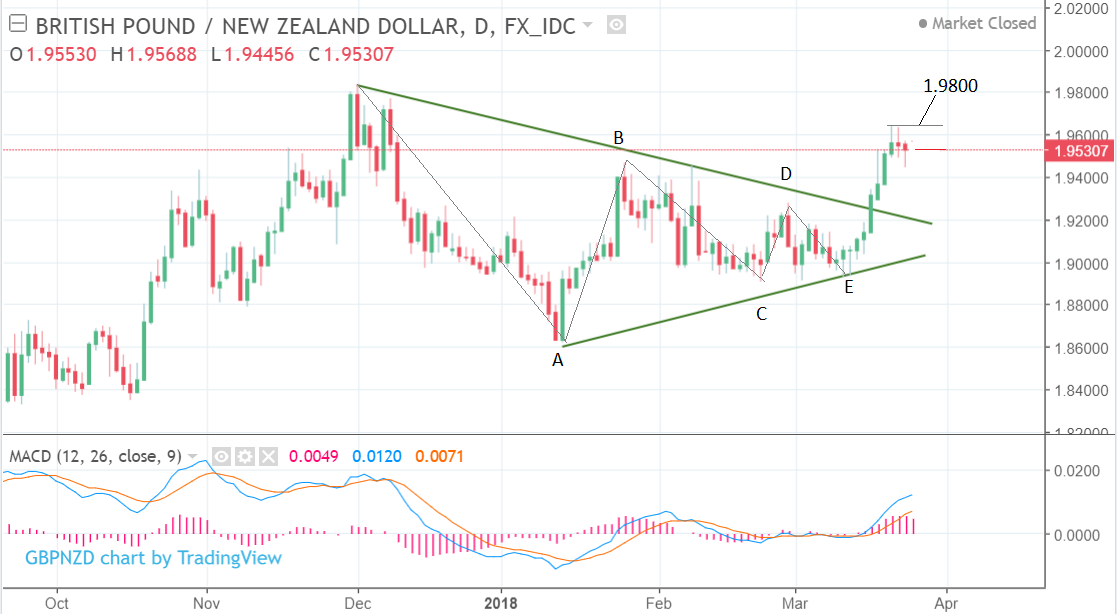 The target is calculated using the golden ratio (0.618) of the hight of the triangle at its tallest point and extrapolating it up from the breakout point.

For confirmation of a continuation up to the target, however, we would ideally like to see a break above the 1.9643, March 21 highs first.

The MACD momentum indicator in the bottom panel is rising steeply above the zero-line and backing-up the bullish forecast.

Our technical studies come days after we reported that BNZ - one of New Zealand's most prominent lenders - told corporate clients that they expect the Pound to retain an advantage against the NZ Dollar.

"GBP is expected to be in the driving seat, recovering from its depressed level when viewed in a medium-long term context," says BNZ analyst Stephen Toplis.

The main headwind for NZD is a gear shift down in global growth and risk appetite due to the current trend in central banks' raising interest rates.

Higher interest rates, or 'monetary tightening' as it is known, curbs lending by making it more expensive to borrow, eventually reducing investment and growth.

Slowing growth will limit demand for commodities leading to a fall in commodity prices.

The New Zealand economy is heavily reliant on commodity exports, especially of soft commodities so its economy will be particularly hit by a slowdown.

"We still think this is a slow-burning headwind for the NZD through 2018," says Toplis.

News and Data to Watch for the New Zealand Dollar

The trade balance was forecast to narrow to -100m from -566m previously.

Ahead, the other major release is ANZ business confidence out at 1.00 on Wednesday, March 28 while later on that day building permits are out for February at 22.45.

"The more significant interest for next week’s publication will come from the national accounts detail released at this time," says Investec of the GDP release. This will include revisions to data on household income and personal finances in general, which affect overall consumer spending, the biggest driver of growth for the economy.

Should growth be downgraded unexpectedly we would certainly expect a soggy end to the shortened week for the Pound.

Investec, however, sees a chance of a lift to -8 in March because of rising wages, less job uncertainty, easing inflation, the agreement of a Brexit transition deal and "the uncharacteristically “Tiggerish” Chancellor at his inaugural Spring Statement.