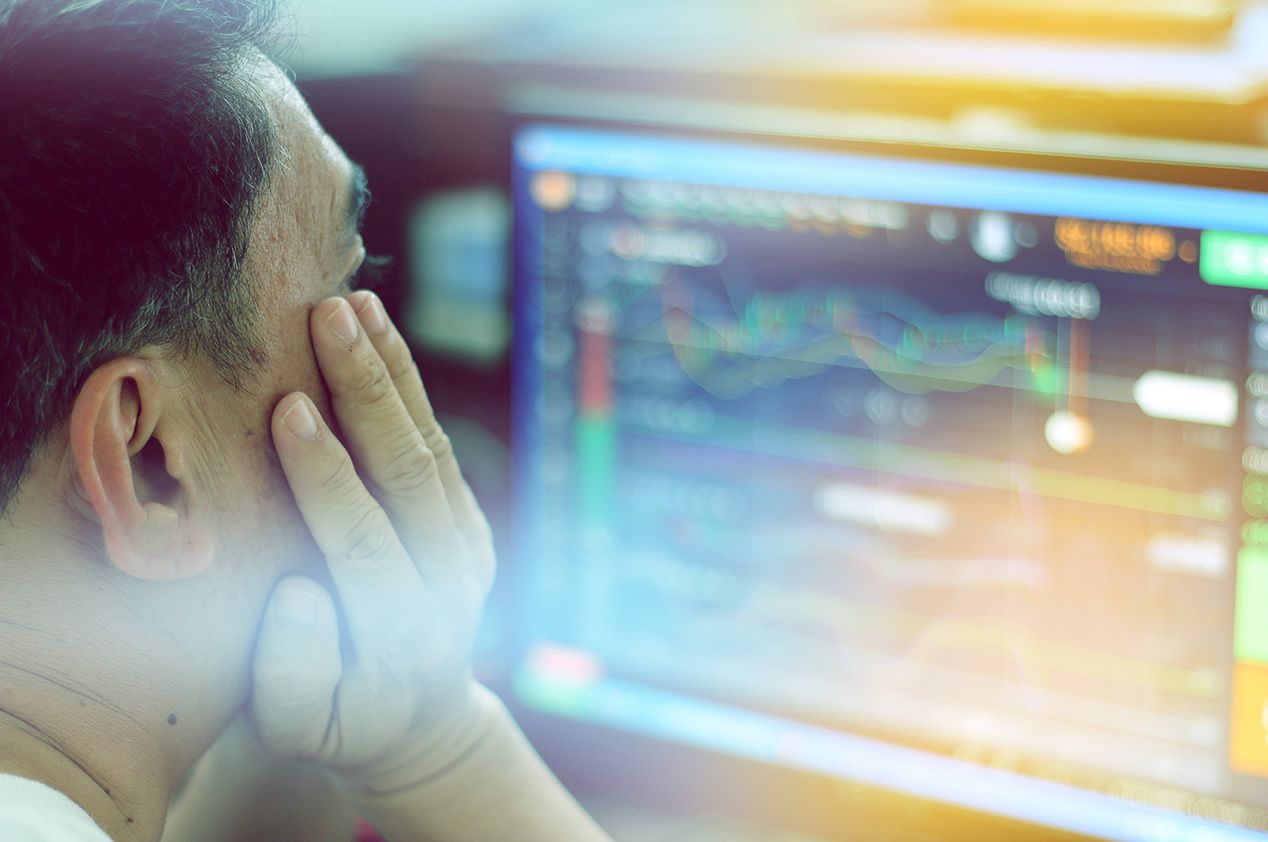 Technical studies show GBP/NZD is waving bullish flags but on the horizon for the pair is the New Zealand central bank policy meeting and an EU Council meeting that should rule on the issue of a Brexit transitional arrangement.

The GBP/NZD exchange rate may be on the verge of a sizeable breakout, something that my colleague first highlighted last week in a report which can be found here.

My latest technical studies on the matter confirm this notion; that the pair does indeed look be on the cusp of breaking out of a sideways range or triangle pattern on the daily chart: 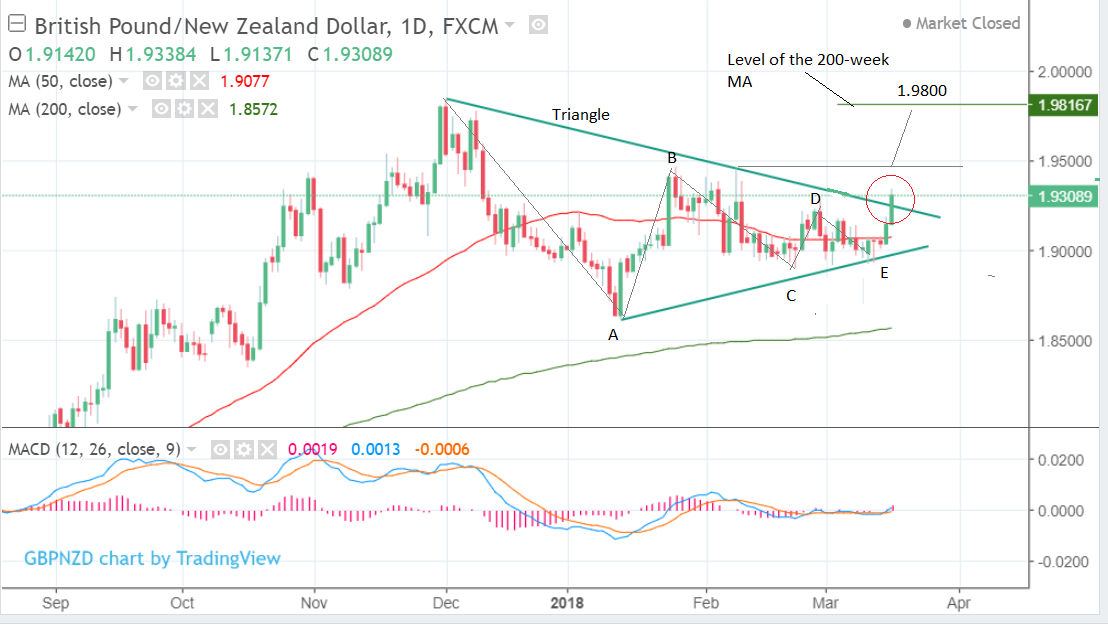 Activity since the start of the year resembles a triangular pattern from which we expect a volatile breakout.

In fact, the pair currently appears to be attempting to breakout higher and has successfully pierced the upper borderline of the triangle (circled in red).

It also seems to have completed the requisite minimum five internal waves for a triangle (labeled A-E) further supporting the possibility it may be in the process of breaking out.

If it continues higher and succeeds in rising above the 1.9455, February 8 highs, that would provide bullish confirmation and probably lead to a steep run-up to a bullish target at 1.9800, just below the level of the 200-week MA, which is likely to present a major obstacle to further gains.

Major moving averages tend to act as barriers to the dominant trend and the exchange rates often stall, pull-back or reverse after touching them.

Data and Events To Watch for the New Zealand Dollar

The main event in the week ahead for the New Zealand Dollar is probably the meeting of the Reserve Bank of New Zealand (RBNZ) at 20.00 GMT on Wednesday, March 21.

The RBNZ sets base interest rates in New Zealand and these impact heavily on the currency as higher interest rates tend to draw more inflows of foreign capital due to the higher returns on offer, and this boosts demand for the currency.

There is little chance the RBNZ will actually raise interest rates at its March meeting - in fact quite the opposite - at the previous meeting, the governor warned that he might have to cut rates if growth kept falling.

Overall data has been mixed, however, and the Bank will probably continue adopting a neutral stance as it has done for over a year now already.

"Data has been mixed with retail sales firm at the end of the year but weakening in January and February. Service sector and manufacturing activity slowed but housing and inflation data have been stronger. None of these changes warrant an adjustment in guidance and the Deputy Governor is still leading the meeting before Adrian Orr takes over as the new RBNZ Governor the week after so earth-shattering announcements are not anticipated," says Kathy Lien, managing director at BK Asset Management.

Another major release in the coming week is the Global Dairy Trade Index, which measures changes in a basket of dairy goods' prices. Prices are fixed at the fortnightly global dairy trade auction on Tuesday at 14.30. The previous result showed a -0.6% decline.

Overall dairy prices have been declining and this is negative for the Kiwi since dairy products are New Zealand's largest export and a fall in price reduces aggregate Kiwi demand, although rising volume has offset the price falls to a certain extent recently.

It is a busy week for UK data with the highlight being the EU summit on March 22-23 which will determine whether the EU and UK will enter a two-year 'transition period' after the official Brexit deadline has passed in March 2019.

A transition period keeps trade settings between the EU and UK more or less unchanged and helps businesses avoid the spectre of a cliff-edge Brexit in 2019 which would see the trade relationship default to World Trade Organisation (WTO) rules tariffs.

The Pound's fate in the coming weeks thus depends very much on whether a transition agreement can be approved.

"If negotiations do indeed proceed in line with the scheduled timetable, this should help to reassure investors that a final deal is indeed possible which should have some upside for the Pound," says a note from global investment bank Investec.

Markets are quietly confident a deal will indeed been reached based on the hints that have been coming through in recent days, Robin Walker - who serves as Parliamentary Under Secretary of State at the Department for Exiting the European Union - said in a speech at the Institute of Directors last week that "we recognise how important it is to secure the deal on the implementation period as soon as possible. I want to stress that we are very close to a deal at this time.”

“Both the prospect and the timing of a transitional deal on Brexit remain highly uncertain. If such a deal does take place, however, it could be an important positive development for Sterling in the near-term by reducing 'cliff-edge' risks," says Lefteris Farmakis, an FX strategist at UBS Group.

However, the issue of the Irish border remains a thorny issue that has long appeared to be at an impasse, and it could yet come to deliver disappointment so nerves will remain elevated.

The other major event for the Pound is the Bank of England (BOE) rate meeting on Thursday at 12.00 GMT.
Although no-change in policy is expected analysts will be carefully combing the meeting minutes, released after the meeting, for signs of which way the monetary policy committee (MPC) appears to be swaying when it comes to future policy.

At the previous meeting, the BOE said they thought markets were underestimating how close the BOE was to increasing interest rates and analysts will be watching for whether this is still the case, according to Nordea Bank's chief analyst Martin Enlund et al.

Much depends on whether the BOE decides to keep the new phrase introduced in its last policy statement that, "monetary policy would need to be tightened somewhat earlier and by a somewhat greater degree over the forecast period."

If the phrase is kept in then it would indicate a greater urgency to raise interest rates than currently expected andresult in upside for the Pound.

Higher interest rates are generally bullish for a currency as they increase inflows of foreign capital drawn by the promise of higher returns.

Another major release in the week ahead for the Pound is inflation data out on 9.30 on Tuesday, and this is forecast to show a slow-down in the rate of inflation to 2.8% year-on-year in February, i.e compared to a year ago, from 3.0% in the previous month.

On a monthly basis, it is forecast to show a 0.5% rise from a -0.5% in the previous month of January. Normally high inflation stimulates currency appreciation because it suggests interest rates will rise, especially if it is caused by stronger growth, but because UK inflation has been caused predominantly by the weak Pound increasing the price of imports rather than growth, the relationship is a little more complex and the Pound may act unpredictably after the release.

Wednesday sees the release of UK labour market data which could also impact on the Pound - if labour data is positive, especially wage data, it is likely to strengthen Sterling.

Average Earnings are forecast to rise to 2.6% in January from 2.5% in December - both including and excluding bonuses - and if this occurs it could provide an impetus to the Pound.

The unemployment rate is forecast to stay unchanged at 4.4% and employment change to show that an extra 85k more jobs were added to the economy when the data is released at 9.30 on Wednesday morning.

Thursday sees the release of another potentially market-moving release in the form of Retail Sales, which is forecast to show a 1.5% rise yoy in February from 1.6% previously and 0.4% month-on-month from 0.1% in January.