“We expect growth to remain at a more subdued pace this year, as the new Government’s policies – particularly around cooling the housing market – are expected to be a drag on activity." - Westpac

The Pound rose against the New Zealand Dollar in overnight trading and held much of its newly-won ground during the morning session in London Thursday as traders responded to an underwhelming set of GDP numbers from the Kiwi economy.

New Zealand’s economy grew by 0.6% in the fourth quarter of 2017, according to Statistics NZ data released Wednesday, which is unchanged from the pace of growth seen during the three months to the end of September 2017.

Economists had been looking for the Kiwi economy to gather a bit more steam during the final months of the year, with faster growth of 0.8% expected, which would have marked a break with the slowdown observed earlier on in 2017.

This left annual GDP growth in New Zealand at 2.9% for 2017, a country mile lower than the 4% growth seen during 2016 as a whole, which highlights the extent to which momentum has ebbed from the economy in recent quarters.

“The unusually hot and dry weather over the quarter was a drag on activity, with agricultural production down by 2.7% and food processing down 0.1%. This is unlikely to reverse in the next quarter, as milk collections so far this year have remained well down on last season,” says Michael Gordon, an economist at Westpac.

“The other goods-producing sectors were also subdued. Non-food manufacturing fell by 0.3%, in part a reversal of some unsustainably large gains in the previous quarter. Construction activity rose 0.7%, with gains in residential and non-residential buildings but a decline in non-building work.”

The New Zealand Dollar sold off in response to the data, dropping by around 40 points to a low of 0.7294 against the US Dollar, before paring some of that loss into the early hours.

The Pound-to-New-Zealand Dollar rate rose by nearly 100 points to a session high of 1.9110 in response to the data. It still remained 50 points above its pre-release level in London Thursday when it was quoted at 1.9070.

“We expect growth to remain at a more subdued pace this year, as the new Government’s policies – particularly around cooling the housing market – are expected to be a drag on activity on balance, at least initially,” adds Westpac’s Gordon.

“The effects of higher fiscal spending are more likely to be felt in 2019 and beyond.” 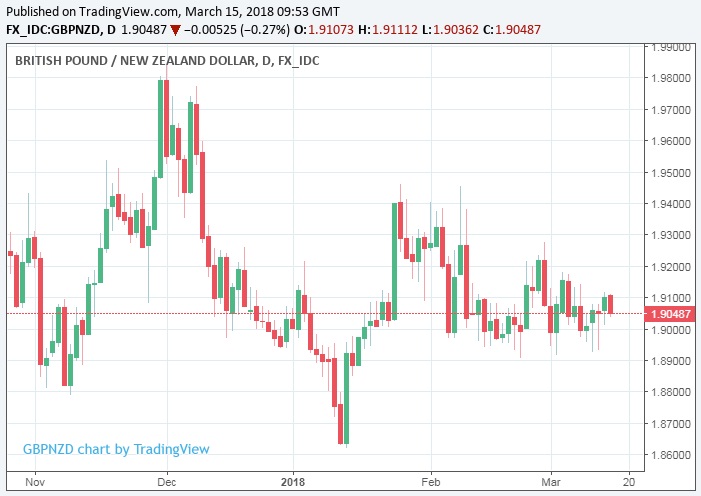 The general election of 2017 and subsequent change of government in New Zealand wrought havoc on the Kiwi Dollar as investors fretted over a series of market-negative policies put forward by the Labour-led coalition.

Plans to reform the Reserve Bank of New Zealand were a concern from a governance and inflation perspective, while Labour’s pledges to ban foreign investors from buying existing residential property, to cut migration into New Zealand and become more hawkish on free trade were also forecast to hinder growth.

While fourth quarter growth did not slow from its third quarter pace, economists look ready to lay the recent moribund performance at the feet of the new administration.

Nonetheless, and although government has moved ahead with most of those policies, it has also sought to support the economy with a broad fiscal stimulus package worth $8.4 billion over four years, which is equal to just more than 0.5% of GDP each year.

“We think it is likely that growth moderates again from 1Q18 given the inventory headwind, and as agricultural export output is down, and the construction pipeline has faded,” says Sally Auld, chief New Zealand and Australia economist at J.P. Morgan, in a recent note. “NZD also rebounded quickly from 4Q’s post-election slide, so is no longer as supportive for financial conditions.”

The downbeat GDP report has only added to an already deteriorating outlook for New Zealand interest rates, which has turned darker and darker during the 2018 year to date.

Pricing in interest rate derivatives markets, which enable investors to hedge against changes in interest rates and provide insight into investors’ expectations for monetary policy, implies that the Reserve Bank of New Zealand will not raise its cash rate until May 2019. The exact implied rate on May 09, 2019 is 2.03%.

This marks a minor reduction from the 2.05% implied rate that prevailed on Wednesday and a substantial deterioration from the situation that existed on January 02, when the implied NZ cash rate for May 09, 2019 was 2.15%.

January pricing suggested, at the time, the market was moving toward an expectation of two full rate rises by this time. But this now looks to have gone firmly into reverse.

The Reserve Bank of New Zealand has held its cash rate at a record low of 1.75% ever since late 2016 and has said little to suggest a change will be on the cards anytime soon.

That said, the Reserve Bank will also change hands on March 27, with NZ Super Fund CEO Adrian Orr set to take the helm. As a result a change in the RBNZ monetary policy stance, for better or for worse, cannot be ruled out over the coming months.

“A modest upturn in two year inflation expectations, to 2.11% in Q1, this marks a fourth straight quarter above 2%, suggests that the market is too sanguine regarding the risks of a rate hike before year-end, especially with a new Governor taking the reins on March 27th,” says Patrick Bennett, a macro strategist at CIBC Capital Markets. "As a result, look for the NZD to reach 0.77 by year-end."

The Pound-to-New-Zealand-Dollar rate is little changed so far in 2018, with just a 0.44% return, although this could change during the months ahead.

Strategists are forecasting that an eagerly anticipated Brexit transition deal will be beneficial for Sterling if negotiators are able to get it wrapped up in time for the European Council summit of March 22-23.

"Both the prospect and the timing of a transitional deal on Brexit remain highly uncertain. If such a deal does take place, however, it could be an important positive development for sterling in the near-term by reducing 'cliff-edge' risks," says Lefteris Farmakis, a strategist with UBS.

An anticipated broad-weakening of the New Zealand Dollar could also add fuel to the fires likely to burn beneath the exchange rate if a deal is announced.

"The New Zealand dollar has surprised many with its resilience over recent months. Its strength has been in the face of the disappearance of interest rate differentials versus the US, higher volatility on global markets, and the recent threats of global trade wars," says Sharon Zollner, Chief Economist with ANZ Bank, in a recent note.

ANZ forecast the New Zealand unit will weaken in the months ahead as interest rates rise elsewhere in the world, which would put the Kiwi currency at an automatic disadvantage to others given the RBNZ is not currently expected to change its monetary policy for some time. More on that here and here.

The Pound to New Zealand Dollar exchange rate entered the new week around the middle of its one-month range and could be likely to trade toward the lower end of that spectrum over the coming days with price action spanning the gap between roughly the 1.9337 and 1.95 levels.