Pound Sterling could experience a significant rise against the Euro over the next year and may see a double-digit increase over the Dollar, say economists at Danske Bank in Copenhagen.

Analysts have crunched the numbers using their MEVA model - a complex piece of proprietary kit used to predict exchange rate movements over a one-to-three year horizon.

MEVA is a model that values currencies using changes in the prices of imports and exports for each nation, as well as transnational differences in labour productivity.

However, for the Pound to revert to these MEVA levels, clarification around the UK’s post-Brexit relationship will need to emerge first.

Sterling is broadly unchanged against the Euro so far in 2018, with the exchange rate still gyrating around a pivot at the 1.13 level as markets eagerly await clarification from negotiators. Traders are unwilling to bid or sell the Pound in case of surprises.

The British currency has also given ground to the US Dollar, which has shown signs of strength more recently, leaving the Pound-to-Dollar with just a 3.5% gain for the year-to-date. It had risen as much as 5.6% in January alone.

“What matters for GBP is the future EU-UK relationship and, not least, reassurance that it can avoid a ‘cliff-edge Brexit’, where there is no deal and no plan when the current 2 year negotiation window ends and the UK formally leaves the EU,” writes Morten Helt, a senior analyst at Danske Bank, in a recent note.

“An agreement on a transitional period would reduce the risk of a ‘cliff-edge’ scenario and clearly be GBP positive, in our view.”

Clarity will come slowly but surely, whether for better or worse, over the course of 2018. An agreement on transition is being slated for the March 22-23 EU Council meeting, while October is expected to see a general outline of the post-Brexit trading relationship materialise.

Assuming a transition deal is reached and progress toward an agreement on the future relationship made, the Pound could begin to converge with the “fair value” estimates produced by Danske's MEVA model. 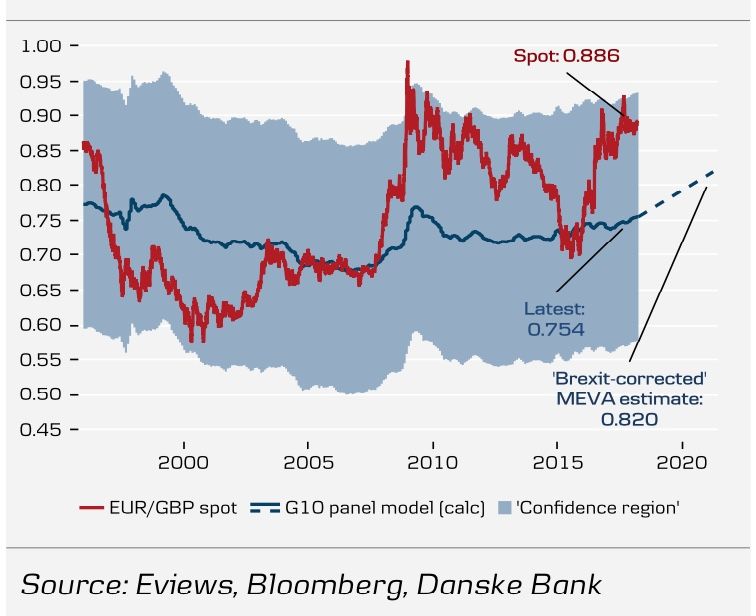 The model estimates fair value for the EUR/GBP rate to be somewhere around 0.75, which translates into a Pound-to-Euro rate of 1.33.

After adjusting for the anticipated effect of Brexit, the supposed fair value for the Pound-to-Euro rate is at a lower level of 1.22, which is still a hefty 6.8% above the market price of 1.1294 seen on Wednesday.

“This is the level which we would expect the cross to gravitate towards, once clarification on Brexit terms arrives,” says Christin Tuxen, chief analyst at Danske Bank, in a note Wednesday.

Moreover, Sterling should trade around the 1.70 level against the US Dollar, in the absence of a damaging departure from the European Union, which is some 22% above the 1.3980 level seen at the time of writing.

Danske Bank analysts are not the only ones looking for a the Pound to experience a boost as uncertainty related to Brexit fades as the currency strategy team at UBS are also predicting a leg higher for the British currency.

This would likely come in response to a transition deal being agreed in March and the market beginning to bet on another interest rate hike being delivered in the near future by the Bank of England.

“Both the prospect and the timing of a transitional deal on Brexit remain highly uncertain. If such a deal does take place, however, it could be an important positive development for sterling in the near-term by reducing "cliff-edge" risks,” says Lefteris Farmakis, an FX strategist at UBS Group.

Transition will ensure the status quo remains in place for a so-far unconfirmed period of time after March 2019, which the government says is necessary to ensure companies have enough time to prepare for the inevitable changes that take place as the UK leaves the EU.

“We find that sterling prices little Brexit-specific risk premium at the moment beyond its effect on monetary policy expectations. As a result, most of the upside for sterling is likely to arise from the more traditional channel of rate differentials rather than risk premium unwind,” adds Farmakis.

Farmakis and the UBS team say the Pound-to-Euro exchange rate could rise as high as 1.1764, up from its 1.1291 level on Wednesday, over the coming months if a transitional deal is agreed in good time.

“In our calculations for every 25bps of additional rate hikes priced in for the BoE vs ECB, EUR/GBP drops by c.2%. The repricing of the relative policy stance by a modest 25- 50bps is fairly plausible, in our view,” Farmakis writes.

But, CIBC says “Look for GBP to Suffer”

Despite cautious optimism from the likes of Danske Bank and UBS, both of which were pessimistic about Sterling up until late 2017, others are still looking for the British currency to face losses in the near future.

“Look for GBP to suffer from the twin threats of political risk and retreating rate expectations, trading weaker against both the Euro and US Dollar over the next few months,” warns Jeremy Stretch, a macro strategist at CIBC Capital Markets.

Stretch and the CIBC team say hopes of a pick up in the pace at which the Bank of England raises interest rates are false hopes, as the economy will unlikely be able to sustain higher interest rates, while political dynamics relating to Brexit will also weigh on Sterling.

“Economic data seem unlikely to provide the backdrop for a near-term BoE rate hike. While policymakers could still move tighten conditions as early as May if there ends up being enough evidence of labour earnings growth, we lean towards a stand pat stance,” Stretch writes, in CIBC’s monthly FX outlook.

The Bank of England warned in February it will raise interest rates faster than the market expects if the UK inflation outlook evolves in line with its latest set of forecasts. It already raised the Bank Rate by 25 basis points, to 0.5%, in November 2017.

Pricing in interest rate derivatives markets, which enable investors to hedge against changes in interest rates and provide insight into investors’ expectations for monetary policy, implies roughly a 50% probability the Bank will raise rates again in May. The exact implied bank rate for May 10, this Wednesday, was 0.639%.

This is up from the 20% implied probability of December 29, 2017 but a long way off of the 0.75% that would prevail if a May rate rise were a given, suggesting investors either have a very benign view of UK inflation prospects or are unwilling to take the BoE at its word.

“Consumer discretionary spending has looked weak. Moreover, while median wage growth has reached 2.5%, the fastest pace since the end of 2015, that’s still negative in real terms after adjusting for inflation,” says Stretch.

CIBC Capital Markets forecast the Pound-to-Dollar rate will rise from 1.3980 in March, to 1.43 by year-end, although they predict the Pound-to-Euro rate will fall from 1.1290 to 1.1111 over the same time frame.

This represents the bottom of the September-March range for the exchange rate.