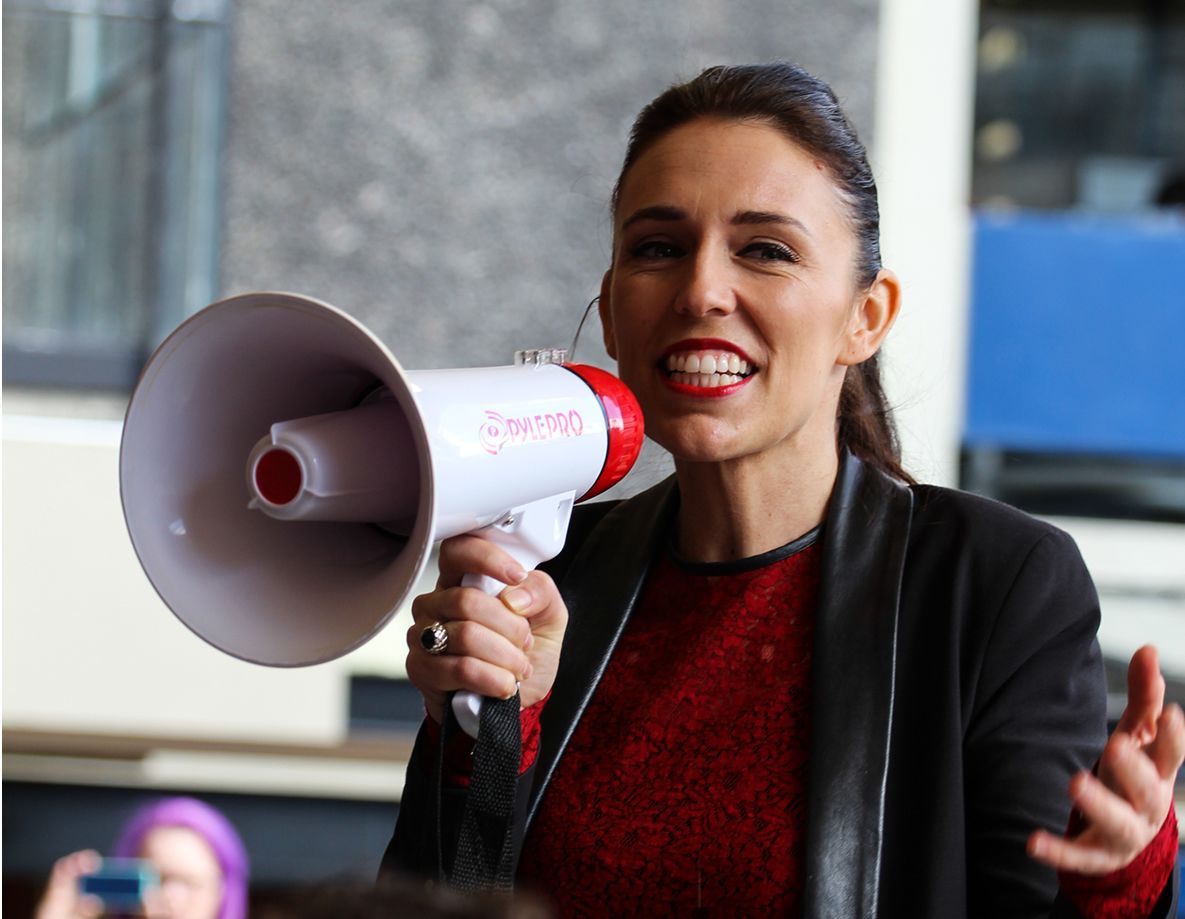 With political risks in the rearview mirror and the economy motoring along, the growth, inflation and interest rate equation will dominate for the New Zealand Dollar again in 2018.

The New Zealand Dollar outlook is bright for February, according to one strategist, even if its performance through the rest of the year still depends on a number of unknowns.

After recovering from its post election loss and, in light of the US Dollar's current weakness, the New Zealand Dollar could go on to notch up further gains in February.

The prediction comes just as Prime Minister Jacinda Ardern celebrates the completion of the coalition government’s 100 Day Plan, which had set contained a range of legislative and budgetary objectives.

“Speculators are still net short NZD, but have been paring back those positions more recently as expectations continue to be revised for the new Labour led administration,” says Royce Mendes, an economist at CIBC Capital Markets, in the bank's monthly FX outlook.

The Kiwi currency was pummeled in October and November 2017 as markets took fright when a Labour-led coalition swept into office in the wake of September’s election.

It lost 6% of its value as investors and traders bet coalition pledges to reform the Reserve Bank of New Zealand, make sharp cuts to net migration and shut foreign buyers out of the NZ residential property market would harm the economy.

However, the New Zealand Dollar has since recovered these losses to be quoted at 0.7361 against the US Dollar Thursday, the same level it was at the day before the election of September 2017. 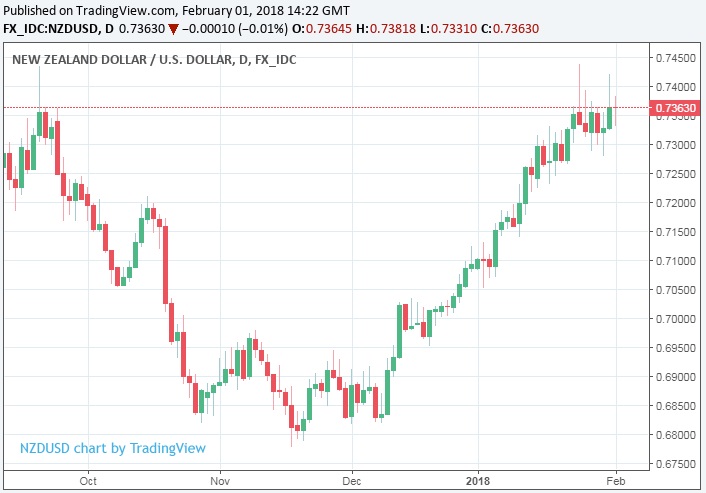 Sterling had also been beaten back by the Kiwi's recovery until around January 12, when the Pound embarked upon a steep climb against all of its rivals as markets bet that the UK is ultimately headed toward a softer form of Brexit. 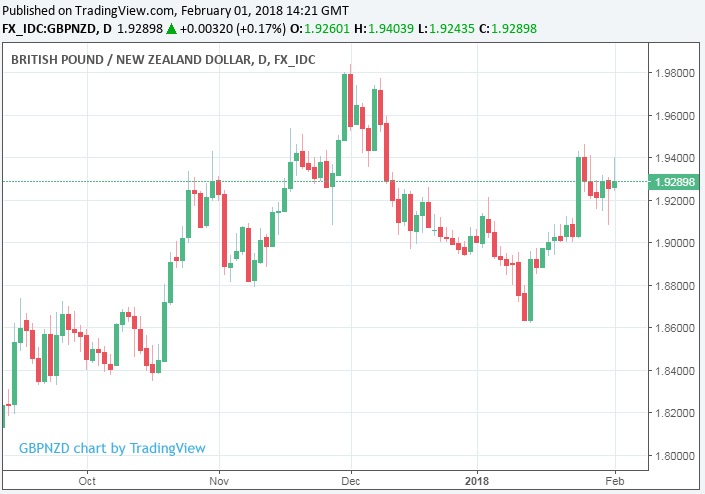 So far, and beyond damage to the currency, the only observable economic fallout from the election has been a decline of business confidence, as the slowdown in growth observed during the third quarter took place before the vote. Data covering the fourth quarter of the year will not be released until March.

“Despite a deceleration in Q3 growth, the incoming coalition government’s fiscal stimulus plan should support activity in 2018,” says Mendes.

The New Zealand government announced $8.4 billion worth of new spending when unveiling its maiden budget back in December, to take place over four years, with much of it going on a package of assistance measures for families and on tertiary education.

“While the net effect of that could be a slight deterioration in the country’s fiscal position and a wider current account shortfall, the former [fiscal position] should remain in surplus over the medium term,” adds Mendes.

Markets gave the budget a thumbs down, with the New Zealand Dollar falling on the day, although economists clearly acknowledge that it will support growth over the coming years.

Ardern's budget doesn't appear to have raised any eyebrows at the ratings agencies either, with Standard & Poor's reaffirming their 'stable' outlook on New Zealand's sovereign rating just this week.

In addition to the vast spending package, which is itself equivalent to just more than 0.5% of GDP per year, the government has announced a double digit increase in the minimum wage before the end of the parliament.

Meanwhile, many of the Prime Minister’s more controversial policies have either been watered down or the actual impact of them has been less severe than was expected - so far.

The ban on foreign acquisitions of existing property is moving ahead, but at a snail's pace, while little fanfare has been made about previously proposed cuts to net migration.

Labour’s review of the RBNZ mandate, likely to result in it being lumbered with an obligation to target full employment alongside steady inflation, originally led some to expect that interest rates would remain lower for longer. But economists now see it making little difference.

The appointment of Adrian Orr to run the Reserve Bank from March 27 has also helped to soothe other concerns over the bank’s independence. Orr is a former employee of the bank itself and most recently headed up the New Zealand sovereign wealth fund.

Back to Inflation and Interest Rates for the NZD

The net effect of all of this is that NZ politics are no longer such a distraction and can now be largely removed from the economic growth, inflation and interest rate equation that drives currency markets from day to day.

“A dip in inflation towards the bottom end of the RBNZ’s 1-3% inflation target range could be in the cards, but we expect new central bank Governor Adrian Orr to indicate that the central bank is intent on not falling too far behind the curve,” says CIBC’s Mendes.

New Zealand inflation fell from 1.9% to 1.6% in the fourth quarter of 2017, drawing it further below the midpoint of the Reserve Bank of New Zealand’s 1% to 3% inflation target.

Only when inflation shows signs of making a sustainable return toward the top end of the range would markets be likely to bet on an interest rate rise in New Zealand, which would be necessary to propel the Kiwi to further gains beyond the short term.

“While the NZD looks to be overvalued according to some metrics, the prospect of rising growth, higher dairy prices and a new Governor intent on showing off his inflation-fighting credentials suggests that the currency could see further gains."

Readers can learn more about what other forecasters say 2018 has in store for the New Zealand Dollar here; Compilation of Major Bank Forecasts, Currency Views for 2018.