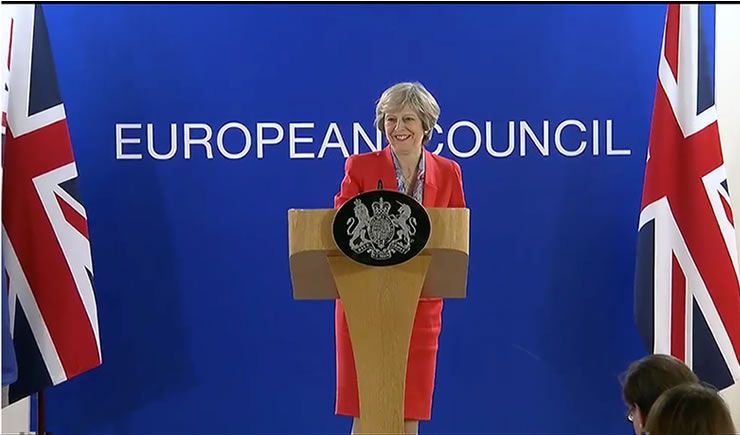 Above: Theresa May could be offered an extension to a two-year transitional period should it be required. This lowers the prospect of the U.K. and E.U. parting ways without a formal agreement, something the Pound likes. Image (C) European Union Press Office

Pound Sterling was the best-performing major currency headding into the weekend following a series of developments that all point toward a softening in the state of play around Brexit.

The E.U. is likely to be willing to extend any transitional Brexit period beyond the December 2020 deadline should such a move be required, according to analysts.

“The idea was raised at a meeting of ambassadors from the 27 EU countries, as the cost of a transition period was debated. The key issue is whether or not a UK-EU trade deal would be completed by the December 2020 deadline, and whether that will strengthen the EU’s position," says William Anderson Jones, Head of UK Corporate Dealing at RationalFX.

Meanwhile, a small band of influential lawmakers in the European parliament are also reported to be considering watering down legislative proposals relating to clearing houses which could mean the negative impact to the City of London caused by Brexit is diminished.

Pundits have long feared that attempts to force London’s clearing houses to move into the Eurozone would hurt both the E.U. and U.K. However, a Reuters report stated Friday that lawmakers’ stances may now be softening in recognition of the negative impact a major disruption to Europe's financial architecture might have.

The developments proved positive for the British Pound which hit a fresh post-referendum best against the Dollar confirming the positive correlation with any moves to a soft-style Brexit remains alive.

"With 1.36 breached, the next target for bulls was the September high of $1.3657, which was duly taken out following reports that Spain and the Netherlands will work toward a ‘soft’ Brexit deal, with GBP/USD making a stab at $1.37 before pulling back to trade around the $1.3670 level," says Neil Wilson, a senior market analyst at ETX Capital.

Other reports stated Friday that ministers from Spain and the Netherlands are pushing for European negotiators to be more open to the possibility of a softer Brexit, where the UK is able to remain closer to the EU than was previously expected.

"Although the comments came from just two ministers who don’t necessarily speak for the Barnier team as such, there is a sense that the direction of travel for the UK with regards Brexit is a lot more positive than it was prior to December," Wilson adds.

Sterling was seen marching higher against a host of major currencies ahead of the weekend, confirming that its fate in 2018 will remain tightly correlated with developments regarding Brexit.

The Pound was quoted 1.05% higher at 1.3684 against the US Dollar during the final hours of trading Friday, its highest level since the Brexit vote in June 2016.

The Pound-to-Euro exchange rate achieved a much lesser gain thanks to an advance by the EUR/USD rate and was marked 0.18% higher at 1.1266 just ahead of the London close.

Friday's move comes after a week of little movement on the Brexit front so this could well be a case of traders reaction to even the slightest Brexit news.

The Pound is particularly attuned to the issue of a transitional period, which would negate the potential for a so-called cliff-edge Brexit that would see the E.U. and U.K. go their separate ways in March 2019 without a formal agreement.

"An important positive implication for the Pound is that the risk of a more disorderly 'No Deal' Brexit outcome has diminished and the pound should strengthen if fears over a more disruptive and harder Brexit outcome do not materialise," says Derek Halpenny, an analyst with MUFG in London.

A "No Deal" Brexit represents the worst-case scenario for Sterling and therefore talk of the E.U. warming to an extension of any Brexit deal is welcomed by traders who bid the Pound higher in reaction.

"The Brexit issue is set to remain the main driver for GBP in 2018 and while uncertainty and fundamentals justify an undervalued GBP for now, we see prospects of a recovery in 2018 as clarification on Brexit increases," says a strategy note from Danske Bank where analysts are betting the Pound will recover against the Euro in 2018.

Friday’s reports about the European Commission not ruling out extending the proposed Brexit transitional period come just 24 hours after Brexit campaigner, Nigel Farage, floated the idea of a second referendum.

The last thing I’ve ever wanted is another EU referendum, but I fear it may be forced upon us. We have to be prepared. #FarageOnLBC https://t.co/dVSrQvrdeK

Although the politician and radio presenter later clarified that he has no desire to see a second vote, he has warned Brexit supporters that another referendum might be necessary in order to force Prime Minister Theresa May to deliver on the outcome of the first vote.

“Former UKIP leader Nigel Farage remarked that a second poll may “kill off” uncertainty about the outcome, while a new poll suggesting that support for leaving the EU is dwindling gave advocates of remaining in the EU reason to back a second vote,” writes Andrew Wishart, an economist at Capital Economics, Friday.

The Brexit leader’s article in The Telegraph Friday highlights how divisions over the final shape of Brexit remain rife in Britain.

Some of those who back an exit from the EU have accused the government of pursuing a “Brexit in Name Only”, or BINO, over fears that PM May’s cabinet could be abandoning the “red lines” set out at her Lancaster House speech in 2017.

“With the potential need for regulatory alignment to resolve the “Irish question” we can expect the expression BINO (Brexit in Name Only) to become more commonly used in 2018, especially if the Labour party come off the fence and argue for the softest Brexit, as a means of garnering political support, especially amongst younger voters,” says David Owen, an economist at Jefferies.