"The recent rallies in risk assets have loosened US financial conditions over the past few weeks. Financial conditions are currently looser than where they were before the start of the FOMC rate hike cycle in March," - Commonwealth Bank of Australia

New Zealand's Dollar was stopped in its tracks near three-month highs against the greenback on Friday and fell to one week lows against Sterling following a retail sales report that was softer than expected but which continued to cast the Kiwi economy in a more resilient light than its UK counterpart.

"The tepid Q3 rebound in retail volumes from the weak first half of the year highlights that 2022 is turning out to be very different for the retail sector after a stellar 2021. Rising and consumer prices are clearly weighing on the purchasing power of consumers," says Mark Smith, an economist at ASB Bank.

"There also looks to be a shift in spending patterns going on, with the reopening of the NZ border and the pivot back to pre-COVID-19 spending habits. That shift is benefitting services spending at the expense of retail goods (most likely consumer durables)," Smith adds in a Friday review of the data.

The Kiwi had notched up a hat-trick of gains over a retreating U.S. Dollar while keeping the Pound suppressed close to November lows earlier in the week. 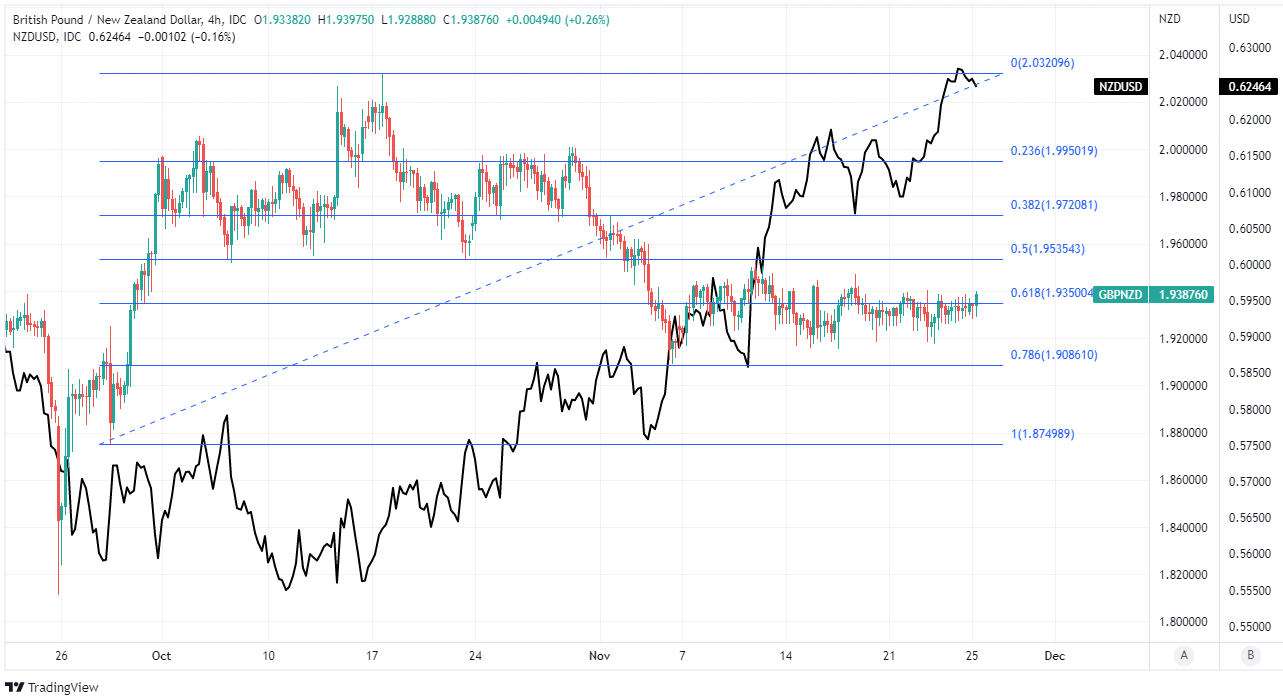 The New Zealand Dollar had outperformed as financial markets responded to a Reserve Bank of New Zealand (RBNZ) interest rate decision in which commentary about the outlook for borrowing costs was much more 'hawkish' than many economists had anticipated.

Kiwi policymakers agreed on Wednesday that the RBNZ likely needs to lift its cash rate to 5.5% and what would be the highest interest rate within the G10 universe of currencies and economies if local inflation rates are to be brought back to within the one-to-three percent target band.

"With the US out for Thanksgiving, it is likely to be a quiet end to the week as markets focus on local factors," says David Croy, a strategist at ANZ.

"As we have stated in recent days, we do think higher interest rates and the RBNZ’s hawkish stance are, on balance, a positive for the Kiwi but newspapers are awash with recession talk, and that of course brings with it the risk that negative sentiment starts to feed on itself," Croy writes in a Friday commentary.

While the RBNZ decision was supportive of the Kiwi, a widespread retreat by the U.S. Dollar has also been a significant driver of the month-long rally in NZD/USD and it's this latter development that has so far succeeded in keeping GBP/NZD suppressed throughout much of the month. 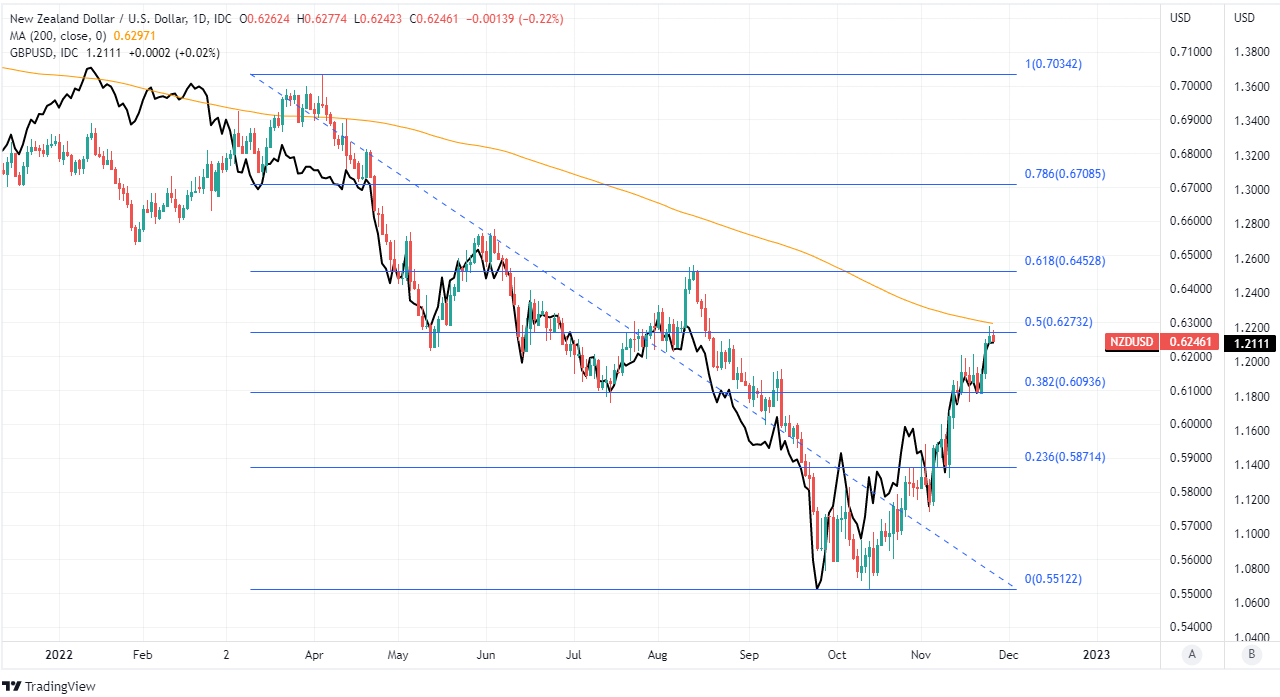 Above: NZD/USD at daily intervals with 200-day moving-average and Fibonacci retracements of April downtrend indicating possible areas of technical resistance for Kiwi and shown alongside GBP/USD. Click image for closer inspection.To optimise the timing of international payments you could consider setting a free FX rate alert here.

The Pound to New Zealand Dollar rate always tends to closely reflect the relative performance of Sterling and the Kiwi when each is measured against the U.S. Dollar but in a manner that often sees GBP/NZD demonstrate a modest negative correlation with NZD/USD.

This means GBP/NZD would likely benefit in the days ahead from anything that helps the U.S. Dollar rise back to its feet following a multi-week sell-off that had by Thursday erased close to half of the year's rally in the Dollar Index.

"USD weakness could temporarily pause next Wednesday. US FOMC Chair Jay Powell will speak on the economic outlook and labour market," says Kim Mundy, a senior economist and currency strategist at Commonwealth Bank of Australia.

Mundy and colleagues say Federal Reserve (Fed) Chairman Jerome Powell's previously-unscheduled speech next Wednesday could reverse recent declines in U.S. bond yields, which would matter for GBP/NZD because falling yields are seen as a key driver of the recent U.S. Dollar declines. 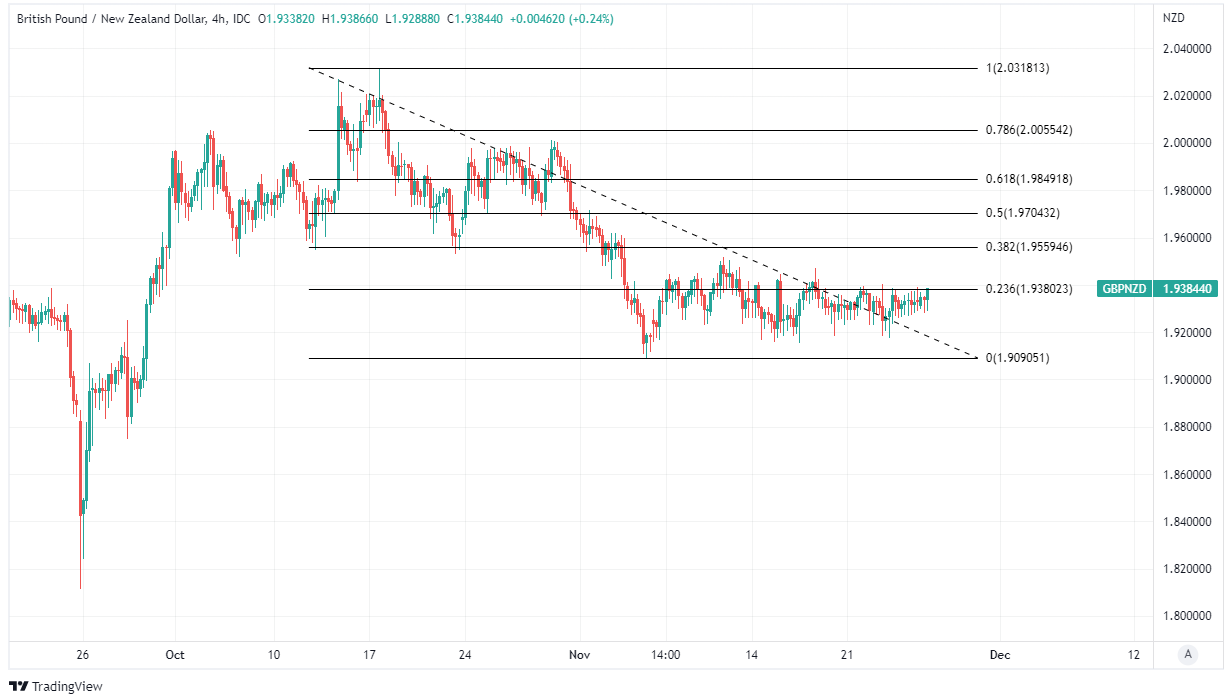 Above: Pound to New Zealand Dollar rate shown at 4-hour intervals with Fibonacci retracements of correction recovery indicating possible areas of technical support for Sterling and shown alongside NZD/USD. Click image for closer inspection. If you are looking to protect or improve your international payment budget you can secure today's rate for use in the future or set an order to lock-in your ideal rate whenever it becomes available. More information can be found here.

Sterling could have scope to edge higher against the Kiwi if Chairman Powell succeeds in reviving the uptrend in U.S. yields or the Dollar, although there is a full slate of U.S. economic figures set for release that could also be influential in what will be a quiet week for Kiwi and UK economic data.

Financial markets were still pricing-in a peak U.S. interest rate of 5% on Friday, however, which is above the 4.75% flagged as likely in September's forecasts while minutes of November's meeting suggested just this week that Fed rate setters are divided over whether there is any need to aim higher.

"The big global uncertainty is; how does the USD treat the prospect of the Fed slowing down the pace of hikes, but potentially a higher terminal rate? Does that feed bearish sentiment, or help USD carry?" ANZ's Croy asked on Friday.

"Sterling is also appreciating, offsetting the higher Kiwi as USD also fades. The next BoE meeting is ~3wks away. Could be range-bound till then," he added. 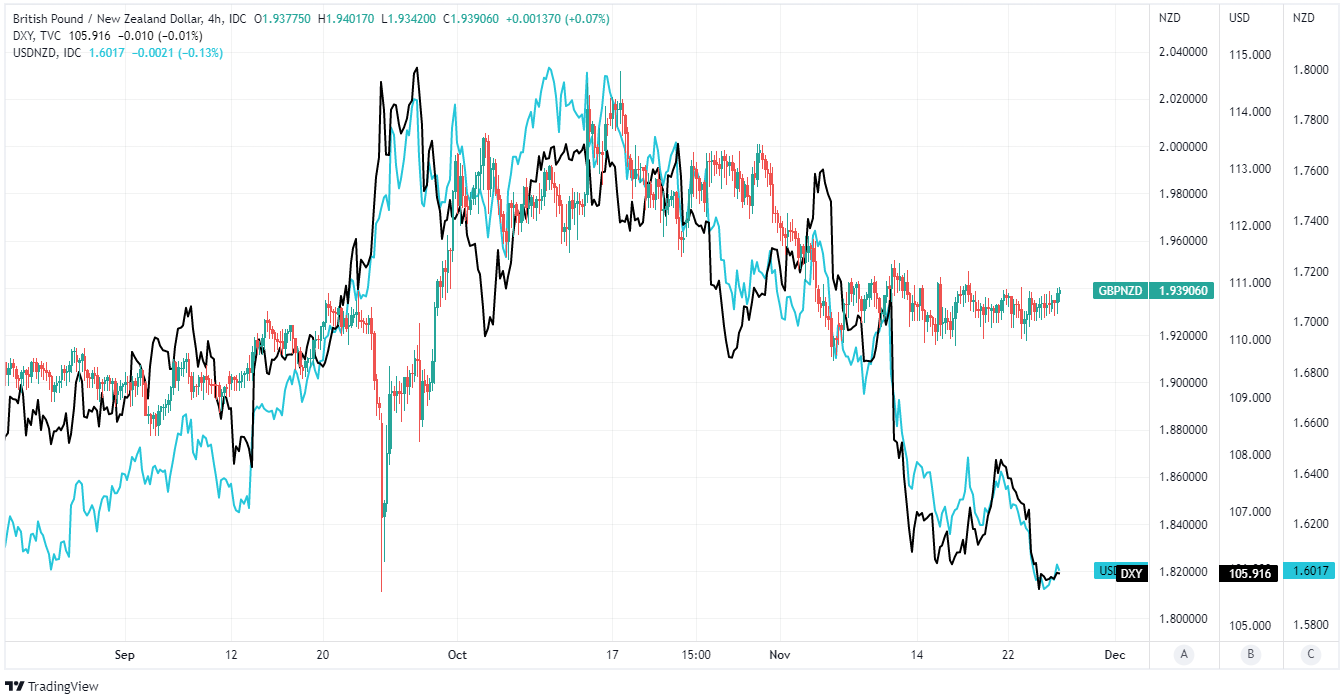