The British Pound is off recent lows against the New Zealand Dollar and is looking to record a second successive weekly gain, but failure by the Bank of England to hike 75 basis points next week could result in a capitulation back to the September 05 lows.

The Pound is in demand at the time of writing, following the release of UK labour market data that revealed wages continue to rise at a faster-than-expected pace while the UK unemployment rate has fallen to its lowest level since 1974.

This will maintain pressure on the Bank of England to raise interest rates again on September 22.

The below chart shows that Sterling has advanced against all its major peers, confirming a distinct outperformance by the UK currency. 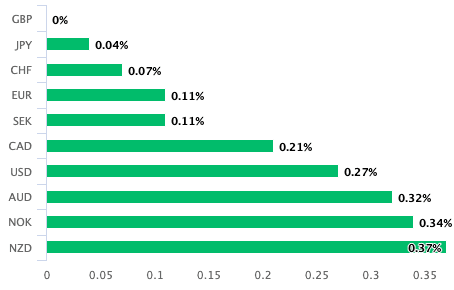 Above: GBP performance in the hours following the release of UK labour market statistics. To stay on top of the market, set your own free FX rate alert here.

The Pound to New Zealand Dollar exchange rate (GBP/NZD) has risen 0.37% at the time of writing to quote at 1.9084, suggesting the rate for NZD payments on bank accounts is around 1.8551 and the rate at independent currency payment providers around 1.9028.

As the above chart reveals, the biggest gain is against the New Zealand Dollar, a move that can be explained by central bank interest rate expectations.

The market is currently anticipating the Bank of England to deliver around 188 basis points of hikes over the remainder of 2022, but the expectation for the Reserve Bank of New Zealand (RBNZ) is much lower at 93bp.

Elevated Bank of England rate hike expectations will only be reinforced by the latest labour market statistics; at the same time there is little in the data to push the dial on RBNZ hike expectations.

In fact, the Pound is outperforming the currencies where it appears the hiking cycle is ending (or in the case of Japan hasn't even begun).

For example, outperformance is also seen against the Aussie Dollar: a further 85bp of hikes are expected from the RBA over the remainder of the year, according to money market expectations.

Rate hike expectations matter for currency markets at present and all eyes will be on the Bank of England next week to deliver a 75bp rate hike, as per current market expectations.

Failure to do so could mean the Pound suffers a material setback and lets the New Zealand Dollar reclaim lost ground.

From a broader technical perspective GBP/NZD remains supported above the September 05 low at 1.8785, which broadly corresponds to the mid-August lows that were defended and the April 2022 lows.

Weakness stemming from a Bank of England disappointment will therefore likely be arrested around these levels going forward.

To the upside there is little by way of serious resistance until the May-July highs at 1.96.

The New Zealand Dollar is meanwhile recovering against the U.S. Dollar amidst a more benign global investor backdrop, but one strategist says further losses are likely over coming weeks.

Analysis from Westpac finds that it will only be towards year-end when the Kiwi currency fully recovers.

"Potential for further upside towards 0.6250 multi-day. That said, global sentiment remains fickle and fragile (European recession and energy shortage risks, and China’s expanding Covid lockdowns, for example as backdrops), and a fall below 0.6000 over the next month would not surprise," says Robert Rennie, who heads Westpac’s Financial Markets Strategy Group.

"But by year end, if sentiment stabilises, there is potential for the NZD to start a rebound towards 0.66. By then, the Fed story may be fully priced into the USD," says Rennie.