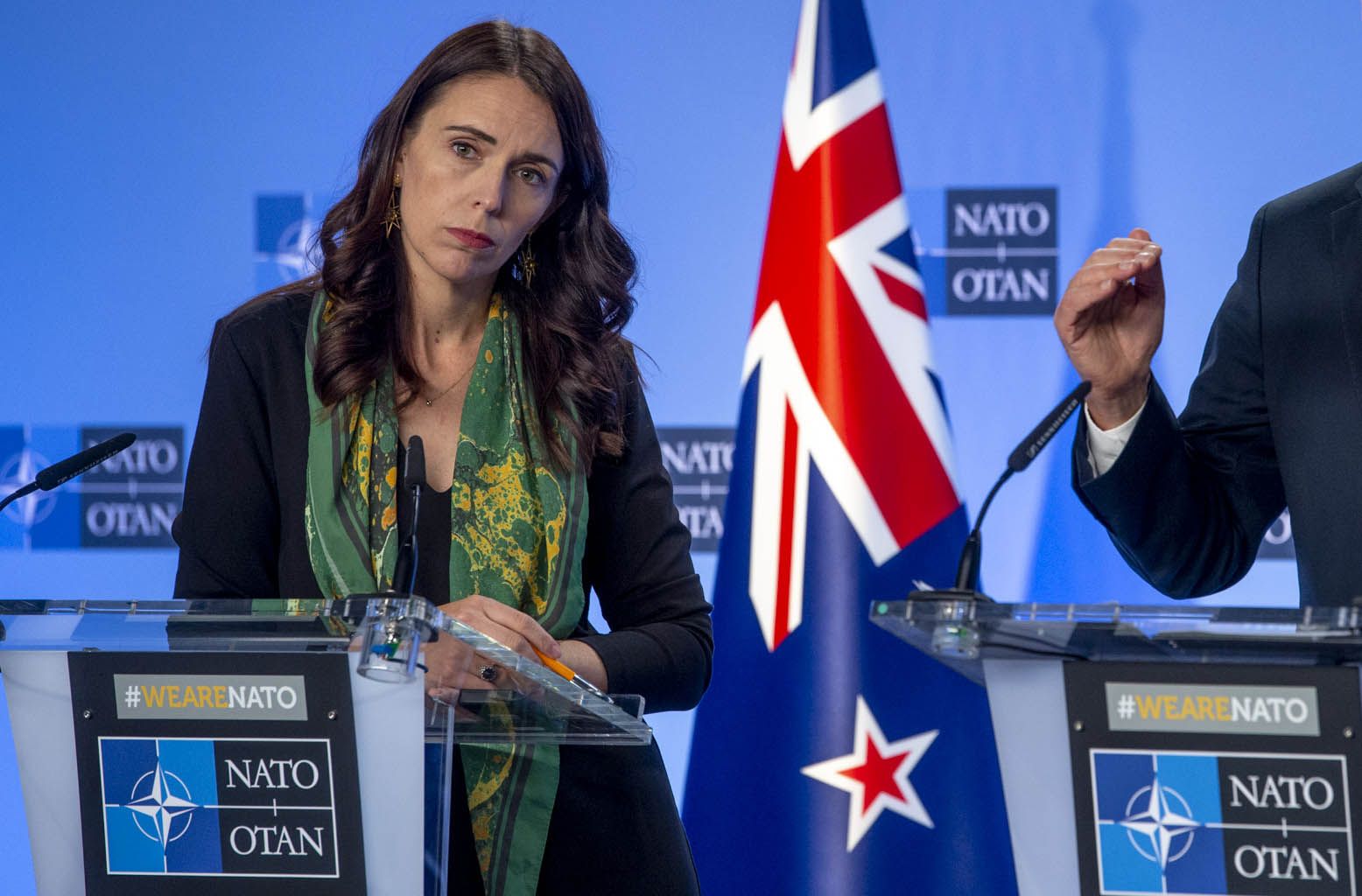 The New Zealand Dollar was jolted by a shock announcement by the country's Prime Minister that a three day snap lockdown would be enforced from midnight Tuesday in response to a single Covid-19 case, a move that will mean the RBNZ is likely to leave interest rates unchanged at its mid-week decision.

Prime Minister Jacinda Ardern said the decision to lock down the entire country was consistent with her policy of "going hard and go fast".

The decision came just hours ahead of a much-anticipated Reserve Bank of New Zealand (RBNZ) decision where markets were expecting the central bank to raise interest rates, a move that would have been consistent with firmer valuations in the New Zealand Dollar.

But a host of analysts have now said the RBNZ will likely delay a rate rise in light of the lockdown.

Indeed, advocating for higher interest rates in New Zealand while the Delta variant punches through the barriers of 'zero covid' nations - such as China and Australia - suggests the pricing for an aggressive rate hike cycle at the RBNZ was at risk of being an optimistic one.

The Pound-to-New Zealand Dollar exchange rate leapt by over a percent following developments to quote at 1.9943, the New Zealand-to-U.S. Dollar quoted at 0.6925, 1.45% lower. 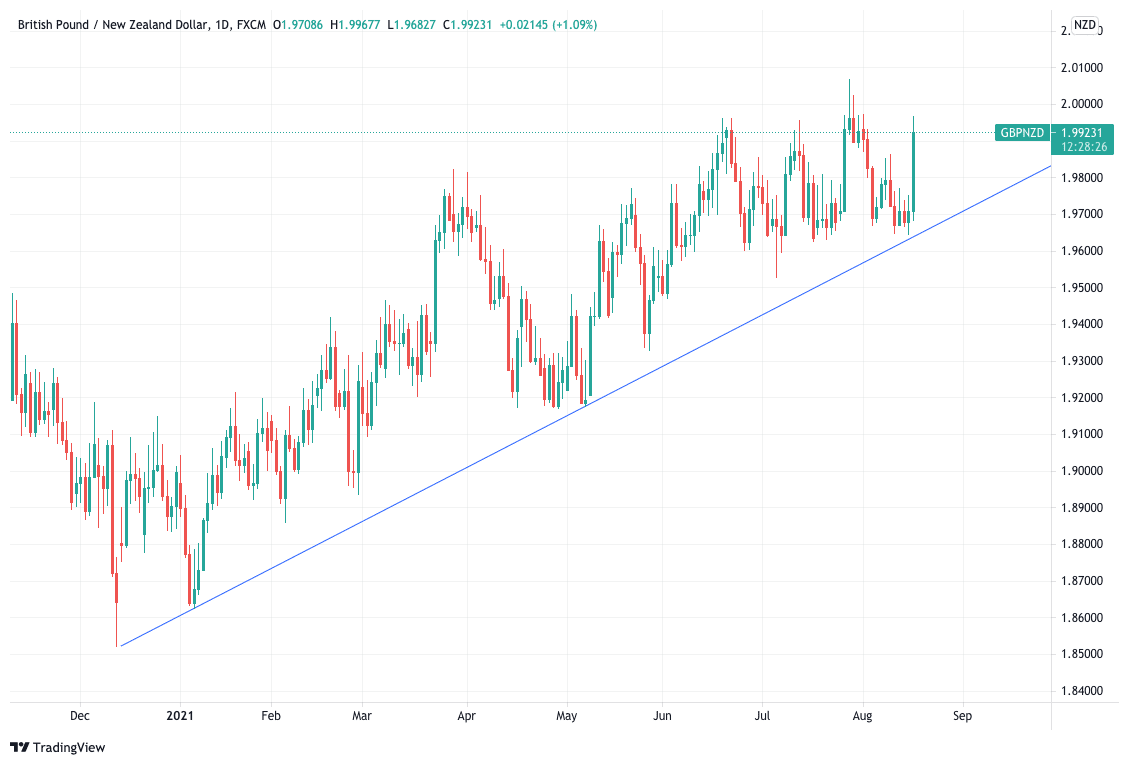 Above: The 2021 uptrend in GBP/NZD remains intact.

"Delta has been a game-changer, we’re responding to that," Ardern said in a press conference announcing the lockdown. "The best thing we can do to get out of this as quickly as we can is to go hard."

New Zealand now moves to Alert Level 4 which means all schools, public venues and most businesses must close and people are urged to wear a face covering if they need to venture out.

Only shops providing essential services such as groceries, gasoline and health products can stay open.

The moves will dent New Zealand's economic growth in the quarter and cast caution on business and consumer confidence, diminishing the opportunity for the RBNZ to raise interest rates.

Economists at investment bank Société Générale say assumptions for a RBNZ rate rise on Wednesday are now "in jeopardy."

"If New Zealand, where only 19% of the population is fully-vaccinated against Covid, sees the virus spread, then it won't be only this rate hike that doesn't happen," says Kit Juckes, head of FX research at Société Générale.

Michael Gordon, Acting Chief Economist for New Zealand at Westpac Bank says "we now expect the Reserve Bank to leave the OCR on hold at tomorrow’s Monetary Policy Statement. Regardless of the economic case for higher interest rates, there is nothing to be gained from pushing the OCR higher now, rather than waiting for more clarity on the Covid situation."

Expectations for no interest rate rise at the August policy meeting makes for an abrupt turn-around in expectations for a market that was expecting a 25 basis point hike, with some even saying a 50 point hike was possible.

"Personally, I would favour going ahead with a 25bp hike at this meeting and making it clear that any further action is entirely dependent on whether the short lockdown works. That might stabilise the currency," says Juckes.

The unwinding of expectations is being reflected in a weaker New Zealand Dollar exchange rate complex and the door to further declines has been opened.

However, Adam Cole, Senior FX Strategist at RBC Capital Markets says the market's fire sale of the New Zealand Dollar might be an overreaction.

"How does the 1.3% fall in NZD/USD today stack up against the repricing of rate prospects? Beyond the uncertainty around tonight’s RBNZ meeting, the prospect of longer-term hikes has diminished only moderately and the fall in NZD today is significantly larger than would have been associated with a move of this size," says Cole.

A market overreaction would therefore be exposed were the RBNZ to proceed with a hike, allowing the NZ Dollar to regain some lost ground.

"Sensitivity to tonight’s outcome may have exaggerated price moves in FX and if the RBNZ delivers a 25bp hike and promises more tonight, part of today’s weakness will likely unwind. But equally, a more material and longer-term repricing of rate prospects (on more infections and longer lockdowns, for example) would open up much more downside for NZD," says Cole.