The Pound-to-New Zealand Dollar rate remains supported above 1.96 amid an ongoing advance by the U.S. Dollar, which could lift Sterling back to 2.00 if it continues weighing heavier on the Kiwi, although market optimism about the outlook for Reserve Bank of New Zealand interest rate policy may see GBP/NZD struggling to extend beyond there.

New Zealand’s Dollar fell briefly to a fresh 2021 low on Tuesday as the U.S. Dollar advanced further against major counterparts, even pushing Sterling into a 2021 loss for the first time this year, although GBP/NZD remained on its front foot above a multi-month support level.

“We still expect to see more NZD downside because we continue to expect the USD to increase in coming quarters. In addition, the Delta strain of Covid‑19 is spreading rapidly in many countries, including those with high vaccination rates. Global growth concerns can weigh heavily on NZD, despite the upgraded view on RBNZ policy normalisation,” says Kim Mundy, a strategist at Commonwealth Bank of Australia.

The commodity-sensitive Kiwi is among the most susceptible to a deterioration of expectations for global growth connected with the continuing spread of coronavirus around the world, and one of the more vulnerable to strength in the U.S. Dollar, which has been advancing steadily since early June; mostly as a result of the stronger economic recovery in the U.S. and its possible implications for Federal Reserve (Fed) monetary policy.

This explains the positive relationship between the U.S. Dollar Index and GBP/NZD, which was one of the few Sterling pairs to rise on Tuesday when the Pound was higher against the Kiwi, Aussie and other commodity currencies but ceded ground to lower yielding and ‘safe-haven’ currencies like the Japanese Yen, Swiss Franc and Euro. 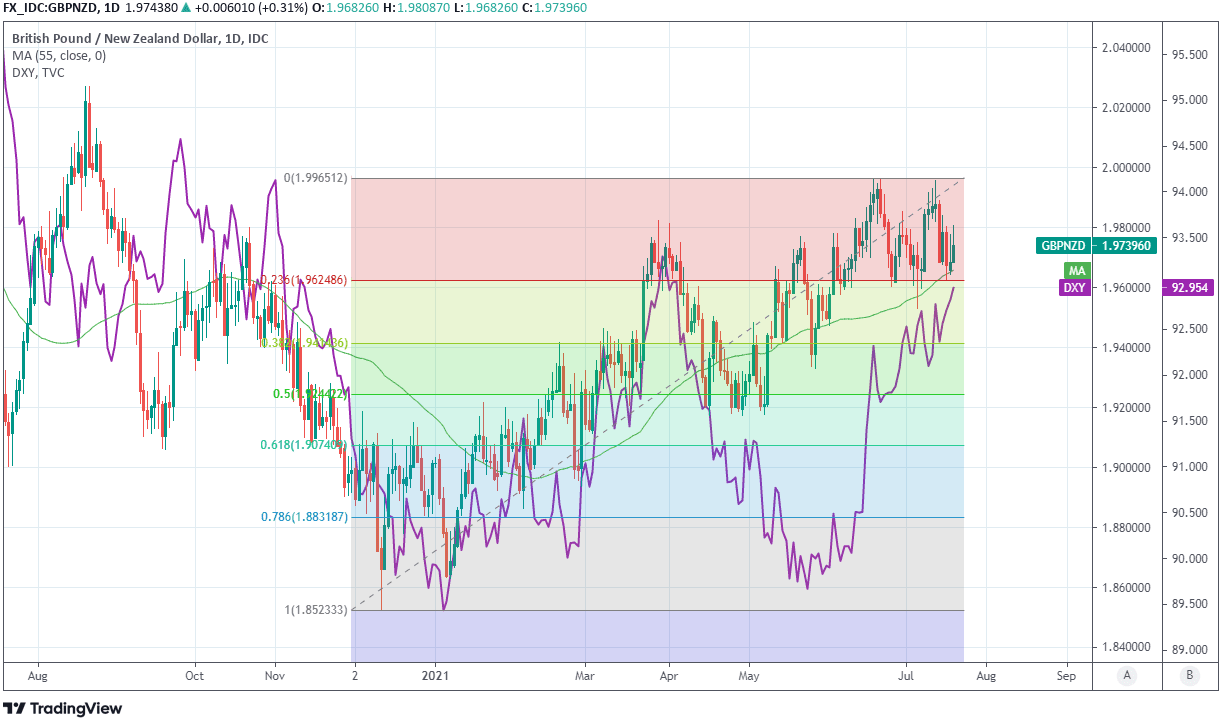 Price action comes as the continuing spread of the coronavirus across the globe including among one the most vaccinated populations in the UK and Israel garners increased attention from analysts and investors.

“The NZ$ is testing major support (and bottom of a month-old range) around 0.6915. A break would signal a further decline to the 0.6800 area during the week ahead. The NZD has been supported by the hawkish RBNZ recently, but should the risk averse mood globally intensify, a sharp breakdown would result,” says Imre Speizer, head of NZ strategy at Westpac.

The Pound-to-New Zealand Dollar rate would rise above 2.00 if the main Kiwi exchange rate NZD/USD falls back to the 0.68 level warned of by Westpac and if at the same time the main Sterling exchange rate GBP/USD remains around Tuesday’s levels.

“GBP/USD has sold off to the March and April lows at 1.3670/69. This may provoke some near term consolidation. Failure at 1.3640 would target 1.3504/1.3457, the 55-week ma and the 50% retracement of the move higher from September 2020,” writes Karen Jones, head of technical analysis for currencies, commodities and bonds at Commerzbank.

The Pound-to-New Zealand Dollar rate would stop short of 2.0 if GBP/USD continues to ebb alongside the Kiwi, and likely around 1.9850 if Commerzbank is right to suggest that the latter could be looking at a slide to 1.35.

GBP/NZD always closely reflects the relative performance of GBP/USD and NZD/USD, the latter of which has been supported in recent months by mounting expectations in the market of interest rate rises from the RBNZ as soon as August 2021. 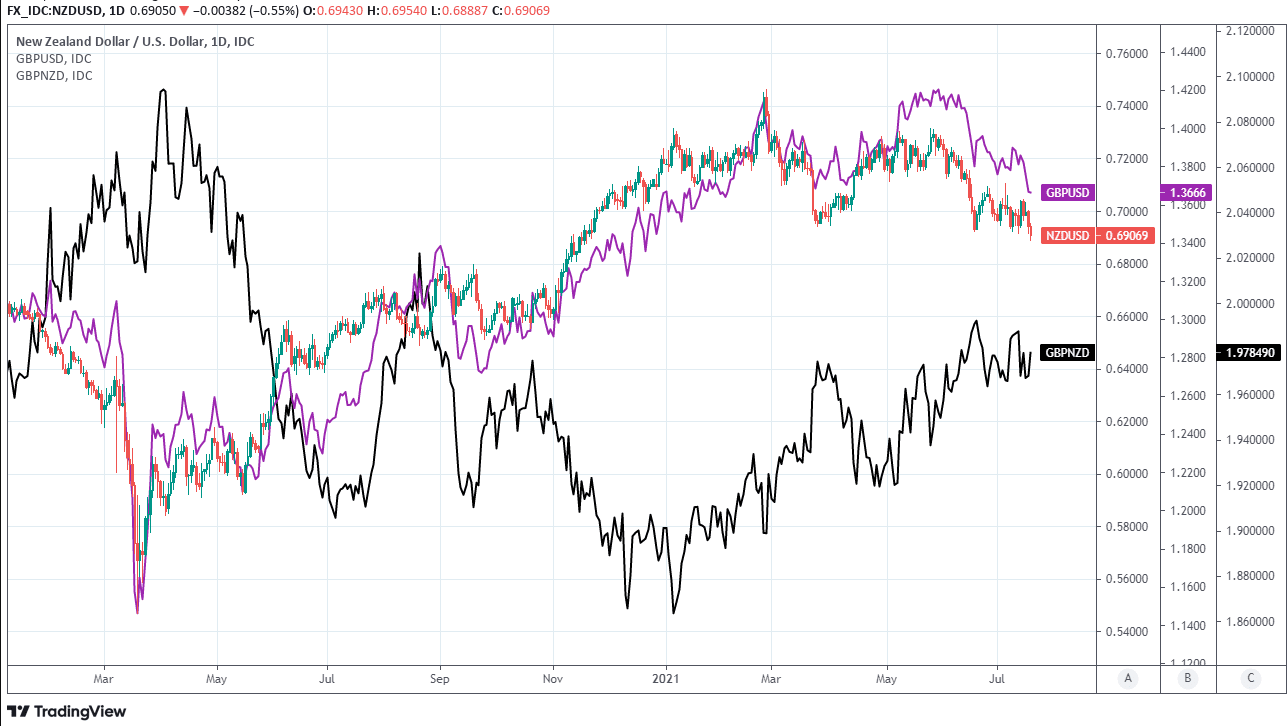 Above: NZD/USD shown at daily intervals alongside GBP/USD and GBP/NZD.

“The stronger domestic outlook in New Zealand has seen the RBNZ stand out as a leader in the G10 tightening cycle. Looking ahead, we think that global drivers will be key for the NZD, with above-trend growth helping to stabilise the currency after recent declines,” says Daniel Been, head of FX research at ANZ. “While the Delta variant has dampened the UK’s reopening, the medium-term growth path remains positive.”

Pricing in the derivative market indicated on Tuesday that investors see the RBNZ as likely to lift New Zealand’s cash rate twice, to 0.75%, by November which is why many analysts expect the Kiwi will either rise against the U.S. Dollar before year-end or see only limited declines.

The outlook for Sterling is less assured however, given the Bank of England (BoE) is generally seen as likely to be much slower in lifting its interest rate, a notion that was given credence on Monday when Monetary Policy Committee members Jonathan Haskel and the incoming Catherine Mann both used public speaking engagements to effectively pour cold water over suggestions the bank should ‘tighten’ its policy settings any time soon.

This was after two other members of the BoE’s nine seat rate setting committee aired opposing views last week, leaving a fine balance among those who’ve recently set out their opinions ahead of a Thursday outing by Ben Broadbent, a deputy governor at the bank and voter on the MPC.

Thursday’s address is the calendar highlight for Sterling ahead of Friday’s retail sales figures for June and in a quiet week for Kiwi economic data.

The New Zealand Dollar is forecast to experience further near-term gains on a combination of fading U.S. Dollar strength and firming expectations for the RBNZ to begin raising interest rates.