The New Zealand Dollar succumbed to resurgent U.S. exchange rates in the penultimate session of the week, reversing its earlier gains and lifting GBP/NZD from its Wednesday lows, although the Kiwi currency has another ace card that could burden the greenback and Sterling next year.

New Zealand’s Dollar remained the outperformer of the week even as it languished at the bottom of the major currency league table on Thursday amid a recovery in U.S. Dollar exchange rates that weighed most heavily on commodity currencies.

The Pound-to-New Zealand Dollar rate climbed back above 1.98 as a result, aided by remarks from members of the Monetary Policy Committee at the Bank of England (BoE), some of whom have cited inflation risks for floating the prospect of an early end to the BoE’s quantitative easing programme similar to that announced by the Reserve Bank of New Zealand (RBNZ) on Wednesday.

“One thing is becoming clear: emergency measures are slowly being eased. The Reserve Bank of New Zealand has announced it will end QE and Bank of Canada has already been tapering their asset purchases programmes,” says Fawad Razaqzada, an analyst with Think Markets. “Could the Bank of England be the next major bank to reduce its monetary support?”

Sterling’s Thursday performance partially reversed declines induced by the RBNZ's decision to end from July 23 the NZ$100bn quantitative easing programme under which it’s bought New Zealand government bonds since the onset of the coronavirus crisis, a programme that had been intended to run until June 2022. 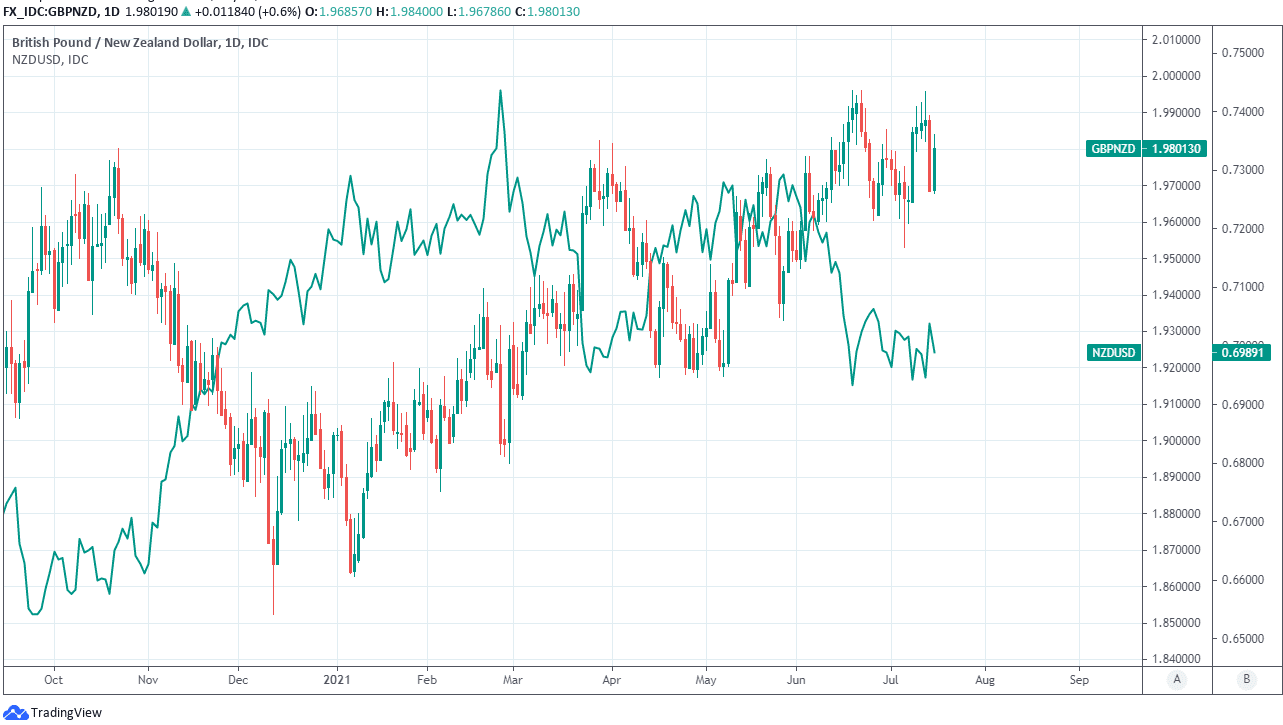 But despite the spirited efforts of both in the latter half of this week, the Pound and U.S. Dollar could struggle to keep the Kiwi currency down over the coming year and for reasons that were reminded of by the RBNZ when it announced the curtailment of its yield-crushing QE programme on Wednesday.

“Recent data indicate the New Zealand economy remains robust despite the ongoing impact from international border restrictions. Aggregate economic activity is above its pre-COVID-19 level,” the Bank said in its policy announcement.

“The Committee agreed that, on aggregate and for the time being, domestic spending and export earnings have compensated for the absence of international tourism earnings,” minutes of the Monetary Policy Committee meeting later reveal.

While the Norges Bank of Norway has for a while been on course to become first major central bank to lift its interest rate following the coronavirus crisis, the RBNZ has rapidly become viewed as one of the most ’hawkish’ if-not the most hawkish.

While this week’s remarks on inflation subtly implied that the RBNZ itself is not yet convinced of the market's view that it may need to raise interest rates as soon as the first quarter of next year, the stimulus injection that New Zealand's economy would receive as and when its international borders reopen to tourists and other travellers is one reason why some investors may eventually be willing to call the bank’s bluff.

“A significant opening of the border is assumed from 1 January 2022 onwards, although some restrictions are expected to remain in place for longer,” New Zealand’s Treasury said in its 2021 budget, economic and fiscal update back in May. 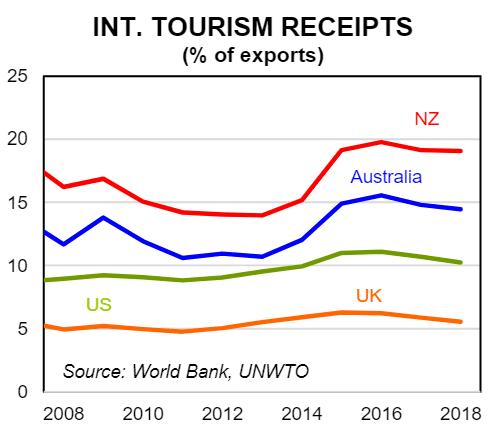 Above: Commonwealth Bank of Australia graph showing tourism receipts (sales) measured as a percentage of exports.

Antipodean economic performances have already differed greatly from those seen elsewhere over the last year due to shorter and less damaging coronavirus containment measures, which enabled Australia and New Zealand’s GDP numbers to return to pre-pandemic levels last year and may only have been possible because of international border closures announced early in 2020.

But more limited economic contractions are only one part of the story because when the closures are scrapped and borders are reopened the influx of tourists and other travellers will deliver a sizeable boost to GDP in an economy which is currently described as “robust” by its central bank and already on course to sustainably deliver policymakers’ target level of inflation sooner than many others out there.

This is evidenced by Statistics New Zealand data, which shows that tourism was responsible for some 5.8% of national GDP in 2019 and although it may be pie-in-the-sky for either investors or would-be travellers to expect that tourist volumes and travel procedures would return to earlier levels overnight, the figures make clear that there’s a sizeable additional tailwind of stimulus looming on the horizon for an already-outperforming economy.

“The economic cost of border closures will be felt most acutely in New Zealand. Australia is the second most exposed economy, followed by the UK and the US,” writes Kim Mundy, a strategist at Commonwealth Bank of Australia, in a June 2020 note. 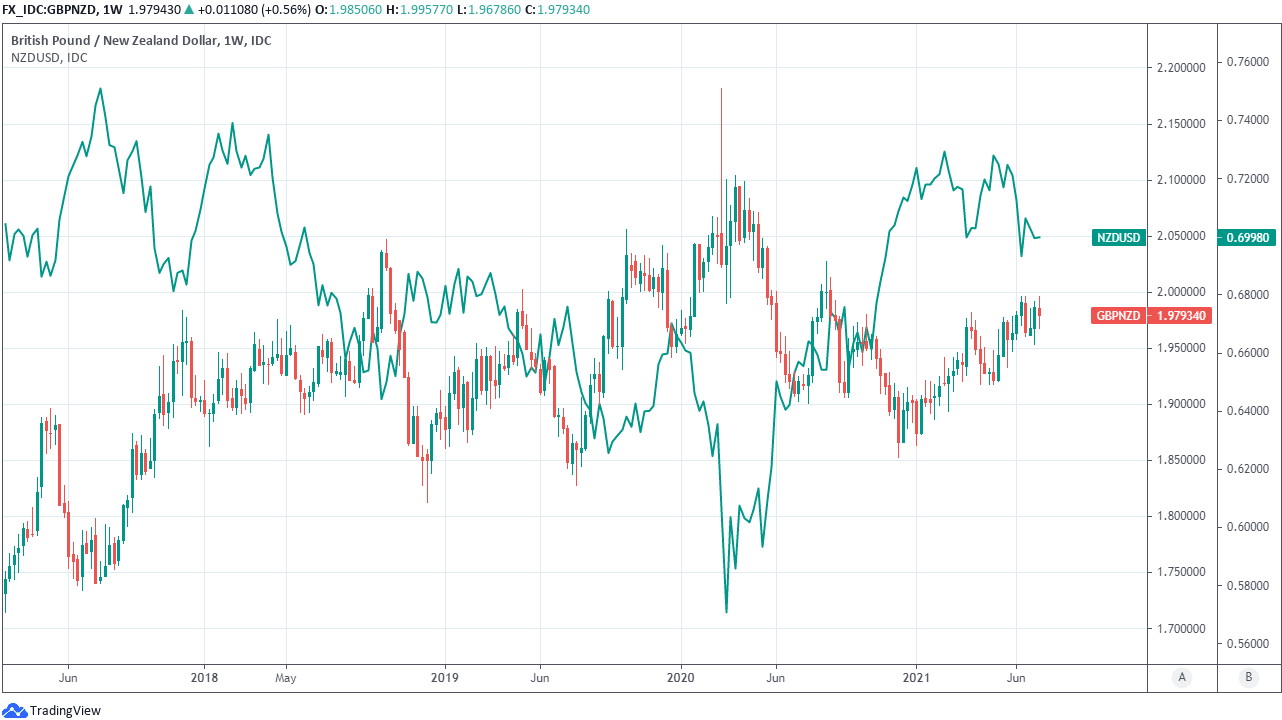 The New Zealand Dollar is forecast to experience further near-term gains on a combination of fading U.S. Dollar strength and firming expectations for the RBNZ to begin raising interest rates.