The New Zealand Dollar could depreciate this week if the U.S. Federal Reserve fails to take a tough stance on rising bond yields we are told by analysts, a development that could in turn allow the GBP/NZD exchange rate to hit new multi-week highs.

An established short-term uptrend in the Pound-to-New Zealand Dollar exchange rate is intact at the start of a new week in global FX and further advances could occur over coming days should Sterling reassert itself and extend the outperformance that has characterised 2021.

The Pound has risen in 2021 on a combination of fading Brexit-linked anxieties, the country's rapid vaccine rollout and a growing belief that the next move at the Bank of England will be to raise rates.

GBP/NZD direction could therefore take direction from an expected surge in vaccinations due in the UK over coming days thanks to an expected jump in vaccine supply levels, as the supply contraints experienced in February and early March come to an end. 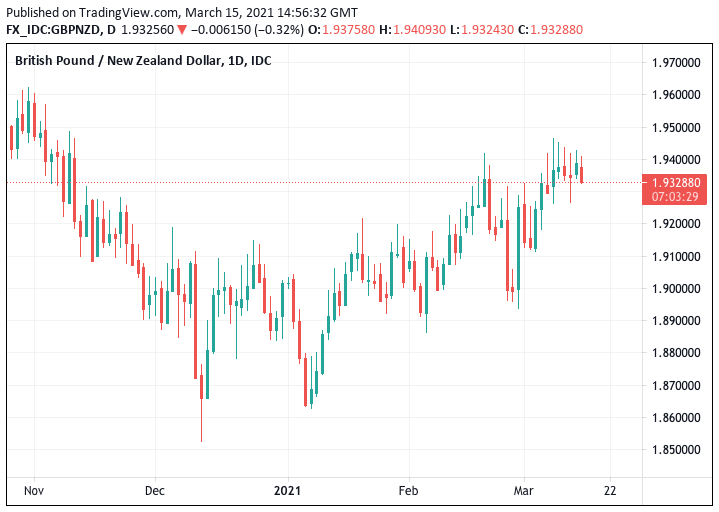 It is now believed the UK will vaccinate all over 50s by April 02, a target that would allow for a sustainable reopening of the economy over coming weeks which could boost UK economic activity notably.

Those watching Sterling will also await Thursday's Bank of England policy meeting for any signs that the Bank is concerned with the rise in UK bond yields, a recent development that has pushed up the cost of finance for the government and businesses.

The Bank could announce a shift to its quantitative easing programme to counter the rise in bond yields, particularly the rise in yields on ten-year bonds.

However a number of Bank of England officials have so far been resolute in avoiding the topic in various public appearances, suggesting they are relaxed about the developments.

A sanguine approach to the issue on Thursday could therefore green-light further British Pound gains against the New Zealand Dollar.

But how the GBP/NZD and other New Zealand Dollar exchange rates end the week could well however depend on the global picture, given the currency tends to appreciate alongside rising global stock markets and commodity prices.

With little on the domestic calendar over coming days the New Zealand Dollar is likely to be driven exclusively by other major currencies.

"The NZD itself has a good story behind it, but this week the ball looks to be in the USD’s court," says David Croy, Strategist at ANZ Bank.

The key event for the Dollar and global financial markets is the Wednesday Federal Reserve (Fed) policy decision where investors will try to gauge whether or not the Fed intends to bring forward the time at which it will start winding back its quantitative easing programme.

Consensus is that Fed Chair Powell will send a strong message that the Fed will resist raising U.S. government bond yields (treasury yields) by keeping policy supportive for as long as possible.

Such a stance is said by analysts to be an outcome that is on balance supportive of equity markets and commodity-linked currencies such as the New Zealand Dollar.

"If the FOMC remains sanguine towards the rise in UST yields, it would lead to depreciation in the AUD and NZD," says Valentin Marinov, Head of G10 FX Strategy at Crédit Agricole.

Keep an eye on the Fed's own forecasts for future interest rates, known as the 'dot plot' chart: should the Fed signal interest rates rises in the future have become more likely markets and the New Zealand Dollar could come under pressure.

"Markets are fretting about how the so-called ‘dot plots’ will evolve, with risks skewed towards signalling earlier Fed normalisation," says Croy.

"We expect the FOMC to signal via its dot plots and rhetoric that it will not be hiking rates anytime soon," says Marinov.

The Fed could also opt extend the exemption of U.S. Treasuries from its supplementary leverage ratio calculation for banks, which would help them better absorb the rising supply of Treasury bonds says Crédit Agricole, both factors which could ease the upward pressure on bond yields and "would be good news for the AUD and NZD".