The British Pound came under sustained selling pressure ahead of the weekend, declining by 0.80% against the Dollar and a third of a percent against the Euro but some recovery of these losses is possible over coming days say some analysts.

The strength of the decline in Sterling on Friday was surprising given the dearth of news and data on offer and the UK currency was softer against all its G10 peers, apart from the New Zealand Dollar which was the biggest loser of the day.

There was no clear signal as to why the weakness transpired, but the hand of profit-taking by traders who have seen strong gains from betting on Sterling in 2021 was suspected by some analysts as driving the move lower, particularly as the sell-off occurred in the run-up to the weekly close.

The Pound-to-Euro exchange rate (GBP/EUR) trades at 1.1660 at the start of the new week, having been as high as 1.16972 already this month. We see the best retail rate for currency transfers being around 1.1580 with banks offering around 1.1435.

The Pound-to-Dollar exchange rate (GBP/USD) trades at 1.3917 at the start of the new week, having been as high as 1.40155 already this month. We see the best retail rate for currency transfers being at around 1.3820 with banks offering around 1.3628. 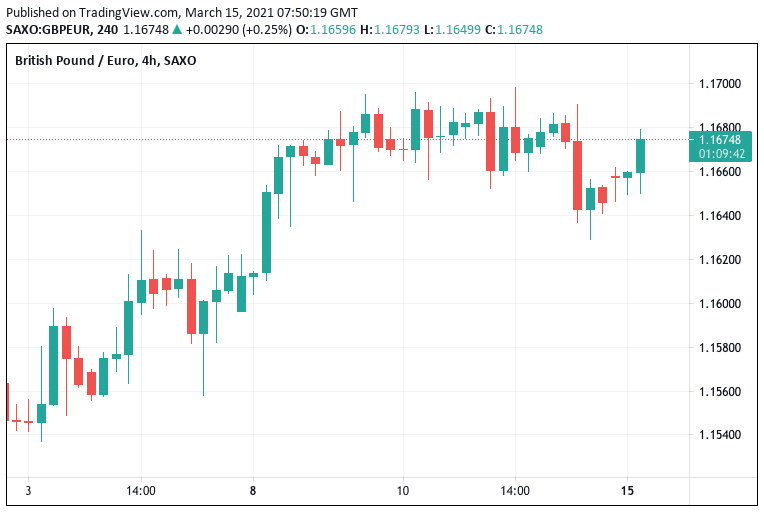 The highlight for the coming week is the Bank of England's (BoE) March policy meeting, and an upbeat message from the Bank is being tipped to support the Pound.

"The BoE should keep its constructive outlook in place, with the fast pace of vaccination (and the pace is poised to double from the next week onwards) supporting the optimistic outlook for the economic recovery," says Francesco Pesole, FX Strategist at ING.

The foreign exchange playbook says that if a country witnesses rising bond yields relative to others, then that country's currency tends to benefit. By extension, a currency also finds support if its central bank is seen to be heading towards an interest rate rise in the future.

This mix of monetary conditions in the UK is widely held by analysts as being supportive of the Pound.

"The GBP remains supported across the board in part because investors continue to expect the BoE to start removing some of its accommodation once its QE programme comes to an end later this year," says Valentin Marinov, Head of G10 FX Strategy at Crédit Agricole.

"We remain constructive on sterling, in particular against EUR," says Marek Raczko, analyst at Barclays.

He says the Bank of England should not follow ECB’s dovish stance and should maintain its balanced tone.

"The MPC will likely acknowledge good vaccination progress in the UK combined with an overall improvement in the COVID-19 situation since their last meeting. The BoE should also highlight that a larger-than-expected fiscal package poses some upside risks to their recent GDP forecast. In contrast to the ECB, we do not expect the BoE to push against the recent rise in yields," says Raczko.

ING analysis shows the market to already pricing a close to one hike for 2022 and another one for 2023, saying a cautiously upbeat BoE message might be a modest positive for Pound Sterling.

However they do not envisage the BoE as being a catalyst for some "profound GBP gains".

"With EUR/USD poised to stabilise as US Treasuries are showing signs of a less erratic behaviour, this should largely cap the recent GBP/USD decline," says Pesole who adds that GBP/USD could "grind back towards 1.40" this week.

ING expect GBP/USD to rebound strongly from the second quarter onwards, in line with the expected EUR/USD gains.

Jeremy Boulton, a Reuters market analyst, said in a recent currency strategy briefing that a rally in GBP/EUR to 1.20 is not out of the question over coming weeks.

He says the GBP/EUR exchange rate faces little significant resistance on the charts while investor interest in the currency continues to build.

"The pound has rallied since Brexit and has seen that rally strengthened by the success of the UK's Covid-19 vaccination programme," says Boulton. "Traders have been slow to buy pounds. They're bullish now."

Crédit Agricole are also looking for foreign exchange markets to concentrate on the BoE this week, but they are decidedly more cautious on Sterling's prospects.

"FX markets will also focus on the BoE policy meeting with investors keen to see if the recent aggressive tightening of the UK financial conditions has affected the MPC outlook. With many positives in the price of the GBP by now, we think that any concern about the latest rally in gilt yields and/or the GBP could be seen as a dovish surprise," says Marinov. 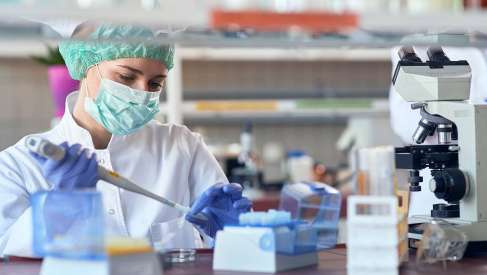 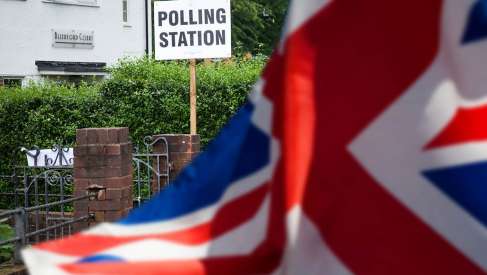 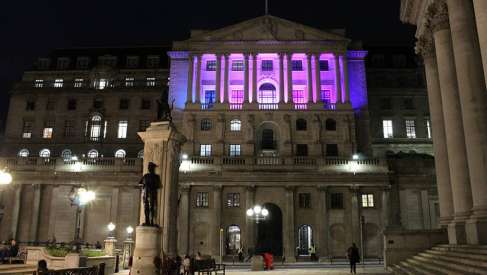