The Euro-to-Dollar exchange rate remained above 1.19 and in the black for the session on Thursday after a European Central Bank (ECB) commitment to be more flexible in its government bond purchases, so as to limit the economic impact of upward pressure on yields, left it neither shaken nor stirred.

Euro-Dollar fluctuated within a narrow range spanning the gap between 1.1940 and 1.1970 after the ECB left its monetary policy settings unchanged before turning its attention to ensuring that rising bond yields do not disrupt economic recoveries on the continent or disadvantage its inflation target.

"Based on a joint assessment of financing conditions and the inflation outlook, the Governing Council expects purchases under the PEPP over the next quarter to be conducted at a significantly higher pace than during the first months of this year," the ECB said in a statement.

This was in relation to the €1.85 trillion Pandemic Emergency Purchase Programme (PEPP) and after the bank said it would leave rates charged or paid on main refinancing operations, the marginal lending facility and bank's deposit facility unchanged at 0.00%, 0.25% and -0.50% respectively this month.

"The big question for the ECB heading into today’s meeting was whether the Governing Council was going to rally behind a common message in relation to the recent rise in euro-area yields. That has been answered with the ECB coming straight out of the block," says Ima Sammani, an analyst at Monex Europe. "PEPP purchases will be “significantly” ramped up." 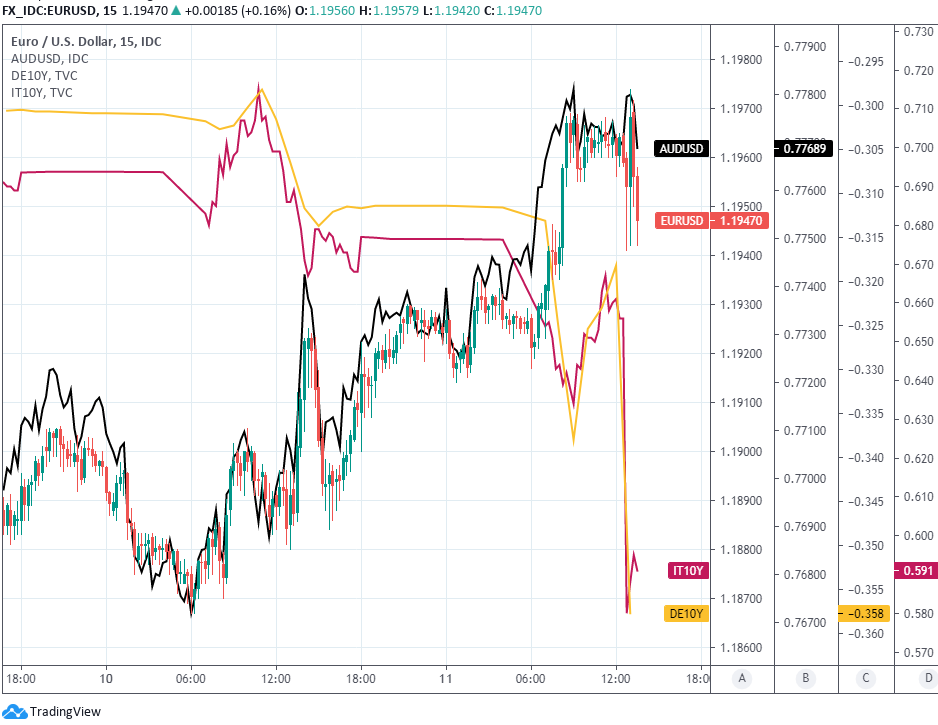 Central banks use interest rates and other tools like QE to manage inflation over a multi-year horizon and normally with a view to keeping it steady at what are generally and in the developed world at least, targets of around 2%.

The ECB was always expected to leave its interest rates and the size of its pandemic-inspired bond buying program unchanged Thursday, although there was uncertainty over what it would do in response to the now-abating rout in global bond markets that began in Washington during late February.

U.S. government bond yields stabilised this week but only after returning to pre-pandemic levels that bake into financing costs, for all economic actors, the assumption that economic recovery will come soon and swift.

Government yields are 'risk free' reference rates and so are invariably included within all interest rates charged on all loans made across an economy, whether to business, household or any other entity.

"Markets have been looking for clarity from the ECB in the past few weeks amid conflicting messages, and it seems as if the central bank has listened," says Claus Vistesen, chief Eurozone economist at Pantheon Macroeconomics.

The outlook for Europe's economy is not as favourable as for the U.S. owing in part to delays in procurement and distribution of coronavirus vaccines but also to a more carefree approach from Washington when it comes to financial support for companies and households.

This has seen the gap between economists' expectations for the U.S. and Eurozone growing larger, which is to many an argument for a lower Euro.

“Much of the future policy remains about how quickly economies can reopen and how many arms governments can get the vaccine into in that time. We suspect the ECB may be in for a nasty shock in later months as the reopening pace is less than expected and demand from China and the US fails to leak into Europe in sufficient quantity . Unless domestic policymakers can up the pace of the vaccine rollout promptly, economic growth is likely to be found wanting," says Hinesh Patel, a portfolio manager at Quilter Investors, an investment and advisory firm with around £100bn under management. 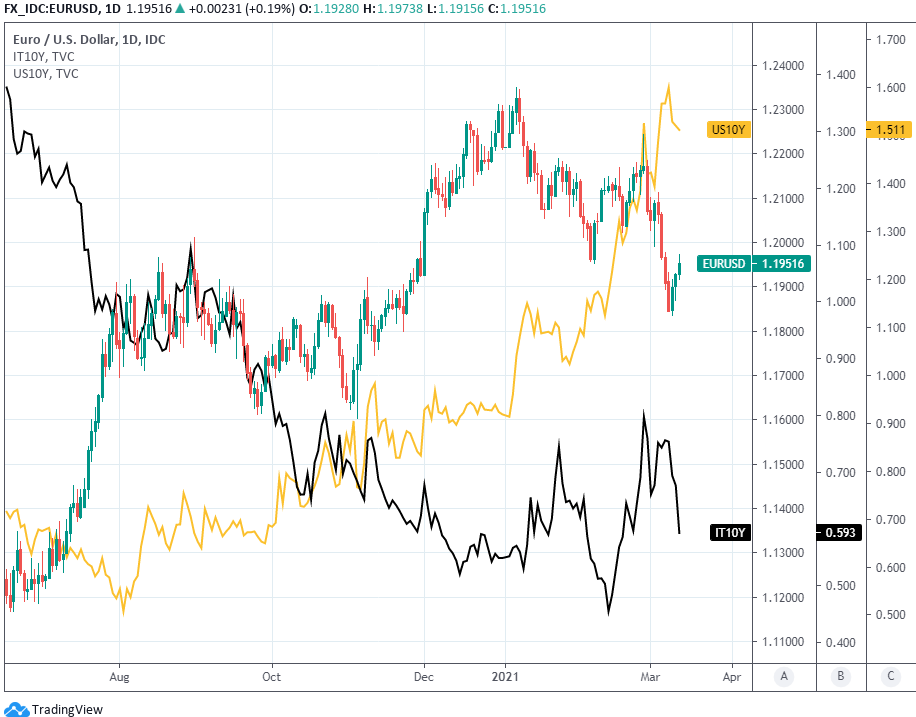 Larger ECB purchases, likely concentrated in markets where heavily indebted governments have seen potentially problematic increaes in yields, would reduce financing costs next quarter and support the economy as officials grapple with the task of ramping up vaccine availability.

Concerns about yields have quickly usurped the Eur as the foremost ancillary threat to the ECB's target to deliver inflation of "close to, but below 2%," in part because of recent price action in the bond market but also because the Euro has fallen widely since the bank's January decision and last venting of concerns about the disinflationary impact of rising exchange rates.

Some analysts and other observers had suggested that any move by the ECB to squash yields this Thursday would come as an upset for the Euro, although the single currency often demonstrates a negative correlation with bond yields, especially those of the more indebted governments like Italy's.

"The surge in US Treasury yields have been the result of higher inflation expectations linked to a stronger US economy and the repricing of Fed rate hikes," says Georgette Boele, a senior FX strategist at ABN Amro. "Yields have also risen in the eurozone. Financial markets are now pricing in half a 10bp rate hike by March 2023, and 1.5 rate hikes of 10bp by March 2024. We also think that this is too aggressive...We remain of the view that the Fed will be less dovish than the ECB or major other central banks, and this will support the dollar versus most major currencies this year and next." 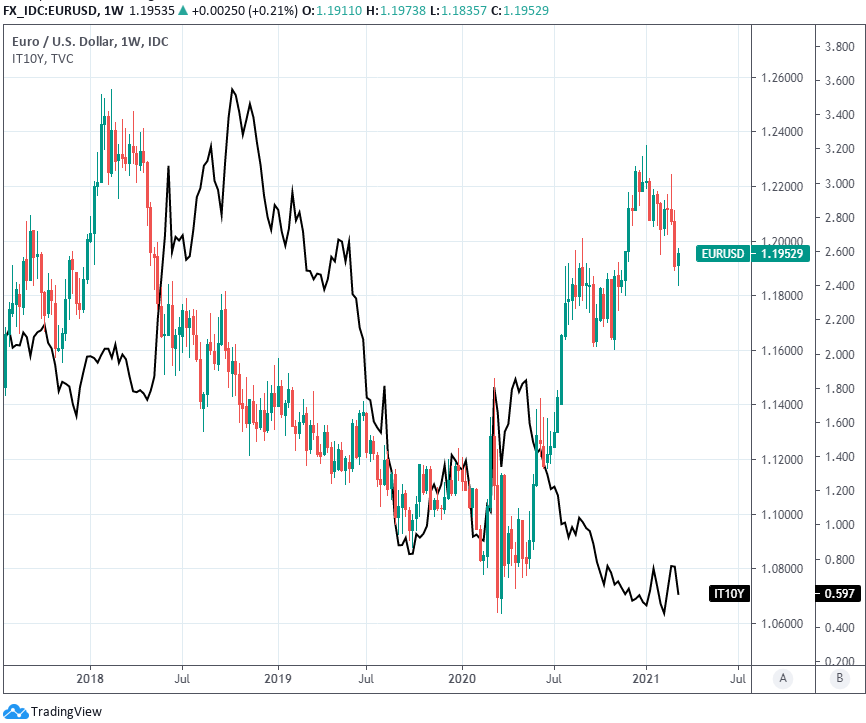