We wrote in our previous week ahead forecast for this exchange rate that a near-term uptrend was likely to remain in place and that a potential target of 1.9189 could be achieved.

A look at the previous week's price action shows this assessment to indeed be correct and a high was put in at 1.9215 on Wednesday, in a spike that ultimately soon fizzled out and a retracement move lower to current levels at 1.8976 ensued.

The near-term setup is not as clear as was the case this time one week ago and there appears to be some consolidation setting in, potentially heralding a reversion to the multi-month decline. 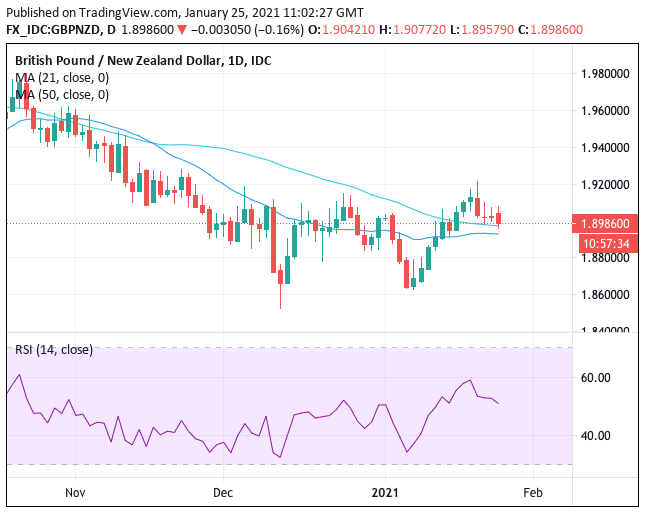 A break below here could usher in further weakness and swing the pendulum back in favour of the New Zealand Dollar and invite a retest of the 2021 lows at 1.8629, thereby confirming that the multi-month trend lower is indeed establishing.

A loss of momentum away from Sterling is confirmed by the Relative Strength Index (RSI) - shown in the lower pane of the chart - which at 50.88, while it is still positive it is losing strength.

Foreign exchange analysts at ANZ Bank this week tell their clients that they expect the New Zealand Dollar to advance against the Pound over the foreseeable future given a rapid deterioration in UK economic data.

"UK economic data is signalling a very severe weakening in UK activity and deterioration in the public finances, neither of which are GBP supportive," says Sharon Zollner, Chief Economist at ANZ Bank.

"Further GBP weakness vs NZD is expected," she adds.

From a fundamental perspective, the New Zealand Dollar has rallied against the Pound, Euro and U.S. Dollar since April 2020 thanks to a global equity market rally that was triggered by the market's expectation that 2021 would see the world economy bounce back sharply.

The move was driven in part by the substantial sums of money pumped into the global financial system by the world's central banks, eager to avoid a severe covid-lead recession.

How long this 'reflation' trade continues will ultimately determine how long the New Zealand Dollar remains one of the foreign exchange market's better performers.

January started off with markets - and the New Zealand Dollar - going higher, but some consolidation has since set in as investors call time on the rally. While some stock indices are still within touching distance of all-time highs, it is worth noting that the advances are being driven by a handful of stocks and the breadth of participation is hardly convincing.

Risks to the outlook remain elevated and holding a strong conviction for further advances in stocks and the British Pound is difficult owing to uncertainties regarding the covid-19 pandemic, and this is being reflected via a pullback in markets as the London session progresses.

"Vaccinations are slower than what we’d expected in virtually all large countries and even in countries where it’s been quicker, eg the U.K., the one dose first strategy means that full protection will be slower to materialise. It also doesn’t seem to be the case that just vaccinating the vulnerable will be enough to lift most restrictions as I’d expected," says Jim Reid, Research Strategist at Deutsche Bank.

"This is partly due to increasing concerns around mutations from various parts of the world," he adds.

The UK is reportedly considering stricter border controls for all travellers this week while U.S. President Joe Biden's administration on Sunday said flights from South Africa would be banned. Meanwhile, France and other European nations are looking to tighten restrictions once more, citing the emergence of the UK covid variant.

Mutations appear to be the primary concern weighing on governments and investors alike.

"Until scientists rule that each will be covered by the current vaccines there will likely be reluctance to lift restrictions. So it now seems we will be constantly worried about mutations until covid has been largely eradicated even if none of them ever evade vaccines. So although I still think there’s going to be a huge surge of economic activity by the summer, there is probably a bit more doubt in my mind now than there was back in November," adds Reid.

On the one hand investors are considering the persistent risks surrounding the covid-19 medical crisis, but on the other hand the prospect of a strong coronavirus support package from the Biden administration which will likely prop up sentiment.

The administration will this week try and push for Biden's proposed $1.9TRN to pass through Congress, however many commentators believe a smaller package will be agreed. A generous package could well provide a backstop to any further deterioration in broader sentiment.

It is possible that expectations for further U.S. stimulus can ultimately provide an insurance against a major downturn in stock markets, a development that could in turn afford the New Zealand Dollar some downside protection in the event of a market retracement.

A strong start to the new week for Pound Sterling means the UK currency is on the cusp of breaking to new 2021 highs against the New Zealand Dollar.

The Pound-to-New Zealand Dollar rate has remained near to three-month highs thus far in the new month but could struggle to extend further in the short-term, despite Sterling's newfound appeal to investors, because an ongoing strong performance from the Kiwi is seen as likely to curtail its rise.