The Pound-to-New Zealand Dollar exchange rate (GBP/NZD) has become increasingly near-term bullish and could be on course to reach an initial target at 1.9189 over coming days.

The GBP/NZD exchange rate is in a near-term uptrend, having risen for six out of the past seven trading days amidst a broader rally in Sterling and an easing in the longer-term New Zealand Dollar appreciation trend.

Owing to the uptick in price action, momentum indicators that cover short-term timeframes (hours and days) are supportive of further gains, with no clear signs of imminent exhaustion in momentum. 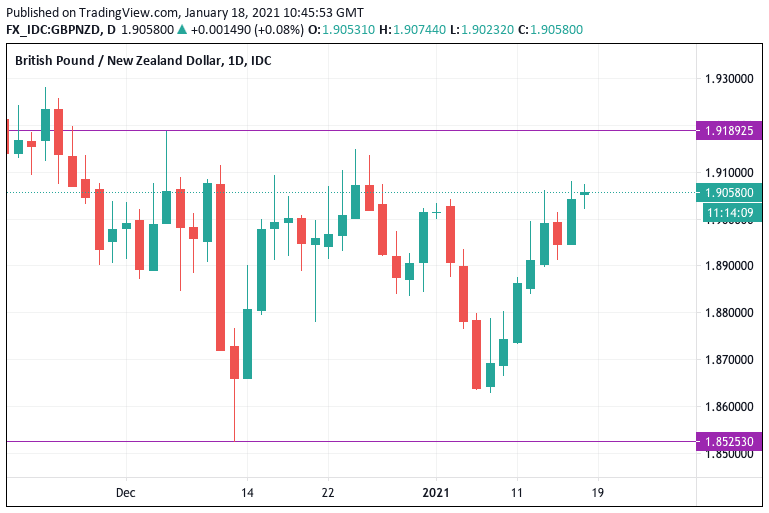 Above: near-term sees Sterling pulling GBP/NZD towards the top of its December-January range

Looking at price action since December we can note the pair has bene in a sideways trend, with January seeing the Pound push the GBP/NZD rate back towards the upper end of the range.

A target at the top of the range, represented by the December high at 1.9189 is the first obvious forecast target (top purple line). The daily chart does however suggest rallies have found resistance anywhere above 1.9050 so those readers with an interest in this pair should be wary of a potential break lower into the range at any point.  Support is identified by the December low at 1.8525.

While the near-term picture is supportive of Sterling, the broader outlook continues to favour the New Zealand Dollar meaning there is an odds-on possibility that New Zealand Dollar strength will reassert itself at some point in coming weeks: 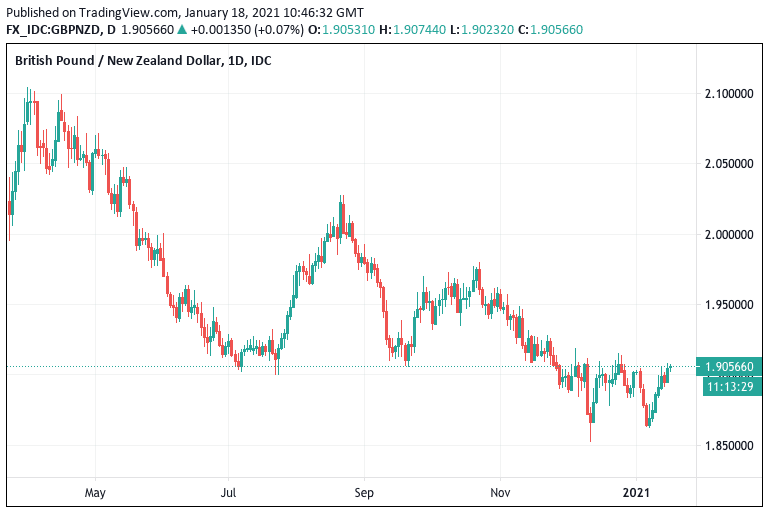 Above: the bigger picture suggests the New Zealand Dollar is still preferred.

There is therefore the possibility that the January strength the market is witnessing proves to be short-lived as the longer-term, more dominant, trend lower is liable to restart.

From a fundamental perspective, the Pound has found support on a paring back of expectations that the Bank of England will cut interest rates into negative territory.

Going into last week money markets were betting on a rate rise by May, but following comments from Bank of England Governor Andrew Bailey that such an outcome was unlikely in the near future, those expectations have been pushed back later into the year.

The Pound rallied against the majority of the world's most significant currencies as a result of this shift in expectation.

The Bank of England will want to give the UK's current vaccination drive the chance to work, thereby allowing a more sustainable economic recovery to take root from March onwards.

There is a risk that New Zealand - which is only expected to commence vaccinations in the second quarter of 2020 - lags the UK in the vaccination dividend, thereby allowing GBP/NZD greater scope for catchup.

The vaccination drive currently underway in the Northern Hemisphere has shown that the divergence in vaccination rates across countries can be stark, with the UK and Israel's rapid rollout contrasting with the anaemic pace seen in countries such as France and Germany.

Central bank policy dynamics - which are currently supportive of the Pound - were responsible for a good portion of the New Zealand Dollar's rally in the second half of 2020 and should return to focus this week.

Going through the middle part of the year markets were expecting a cut into negative interest rates at the Reserve Bank of New Zealand. But, stronger than expected domestic growth and a broader global expectation for vaccines to boost the economy in 2021 put paid to that expectation, allowing the NZ Dollar to recover into year-end.

With this in mind, the domestic calendar offers up some interest this week with the release of fourth quarter 2020 inflation data on Thursday, "which may have dropped closer to 1.00% (YoY) as economic activity struggled due to virus containment measures," says Chris Turner, lead foreign exchange strategist at ING Bank.

Given how important RBNZ dynamics are to the New Zealand Dollar, the inflation reading could be significant,

"There is no more upside room for RBNZ rate expectations after negative rates have been fully priced out, so a grim read may prompt some investors to reconsider some bets on more monetary stimulus," says Turner.

The analyst adds the New Zealand Dollar appears in a more fragile state when compared to its peers the Australian and Canadian Dollars.

In a week-ahead forecast note, ING's leading FX strategist Chris Turner says the currency is lacking a buffer (like the iron ore rally for AUD) when the risk environment becomes choppier.

"Another factor contributing to NZD underperformance is the possible unwinding of some speculative long positions that (according to CFTC data) were at +26% of open interest on 5 January, the highest in G10," says Turner.