The New Zealand Dollar was a laggard Thursday but remained the comeback currency of the final-quarter, if-not year overall, and is widely forecast to extend its recovery in 2021 even if an ever-watchful Reserve Bank of New Zealand (RBNZ) does again constrain the pace of its appreciation.

New Zealand's Dollar was higher against only an underperforming Euro, Swiss Franc and Norwegian Krone during the final hours of trading in 2020 but remained the second best performing major currency for the fourth quarter, behind on the Swedish Krona.

The Kiwi's recent outperformance is thanks mainly to an about-turn in policy bias at the Reserve Bank of New Zealand, whereas before the Kiwi's gains had been almost exclusively the result of declines by the U.S. Dollar  - which is still also widely projected to unravel further in the New Year.

"Both the RBA and RBNZ have expressed a desire for their currency values to assist prospects for a recovery in employment. Still, in supporting the economy and assets, the attraction of both AUD and NZD to investors will be little diminished," says Patrick Bennett, a strategist at CIBC Capital Markets, who forecasts a 2021 NZD/USD rate of 0.73.

New Zealand's Dollar had underperformed earlier in 2020 despite faster progress by the antipodean country's authorities in containing the coronavirus, with the RBNZ firmly in the frame for the malaise after the bank spent months preparing investors for the possible implementation of negative interest rates only to change course in November. 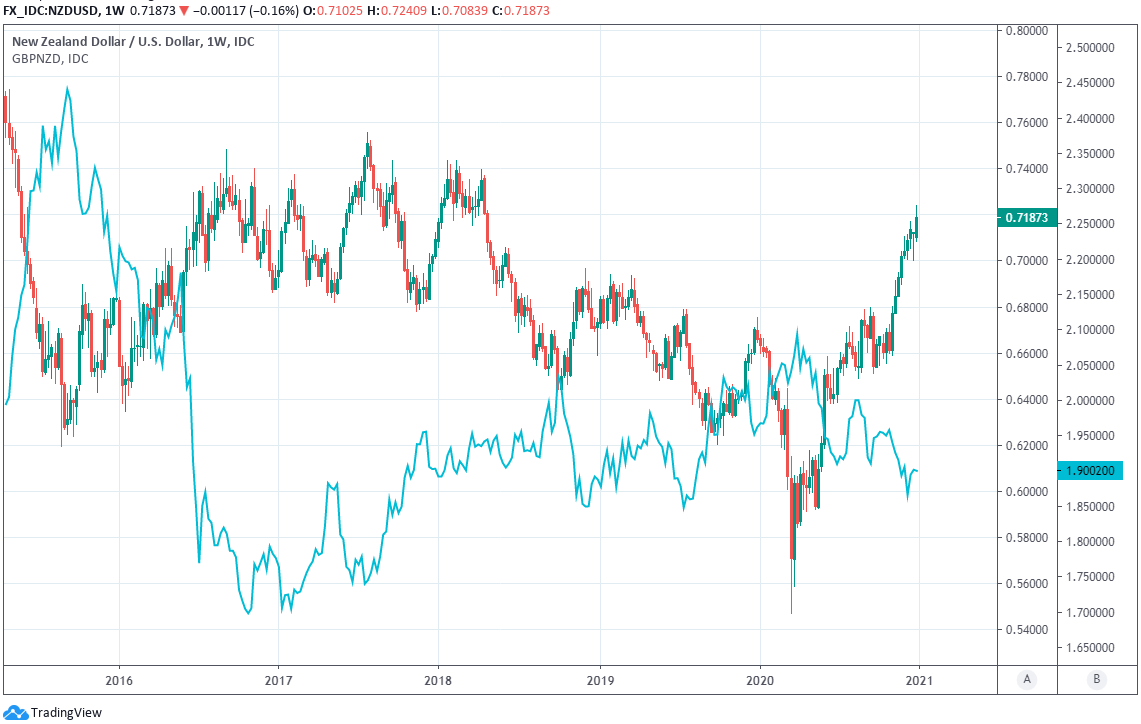 The RBNZ indicated strongly last month that it no longer sees negative rates as being necessary to the same extent as it did before, prompting investors to walk away from wagers against the Kiwi in the process, which has provided the currency with a tailwind of support into year-end. It was currency concerns that had evidently played a prominent role in the bank's thinking, with RBNZ officials fearing that a New Zealand Dollar rally would further damage an already troubled export sector while lessening consumer price pressures and so pushing the 2% midpoint of the bank's 1%-to-3% inflation target further from view.

"NZD is also facing large undervaluation and should remain on an appreciating path in 2021 as global recovery progresses. The RBNZ, and its aversion to a strong NZD, remains the key risk to the outlook, but we expect no more rate cuts," says Francesco Pesole, a strategist at ING. "We have long been reluctant to forecast NIPR in New Zealand, and the recent hawkish shift by the RBNZ further convinced us 0.25% should remain the policy rate throughout 2021."

Pesole and the ING team forecast NZD/USD will rise to 0.73 by the end of 2021 which, while not too far above Thursday's New Year's Eve levels, would still be the Kiwi's highest since early 2018. The New Zealand Dollar has not often traded above that level since before the formation of a coalition government between Prime Minister Jacinda Ardern's Labour Party and Winston Peters' New Zealand First. The Pound-to-New Zealand Dollar rate is forecast to rise from 1.89 to 1.9452 by the end of 2021.

There's no way for external observers to know whether the New Zealand treasury's concerns about rising house prices played a role in the RBNZ's change of stance during November, although it became clear this month that a rift has emerged between government and the independent central bank.

This is after Finance Minister Grant Robertson made private and then public equiries about the extent to which it might be appropriate for the bank to be mandated to further consider the impact that its policy has on house prices before setting interest rates. Kiwi home prices have risen by double-digit percentages this year.

In addition to abandoning bets on interest rate cuts, investors appeared to have also given up wagering against the Kiwi since mid-December when Robertson appeared to dismiss RBNZ concerns about currency strength when speaking in an interview with Bloomberg News. Robertson said Kiwi Dollar strength is a function of "the way people view us," noting that the economy is "significantly stronger" than it was earlier this year when asked whether it would be appropriate for the RBNZ to cut rates below zero.

"Should NZD rally much further, we would not be surprised if the RBNZ switched to a tougher stance. This could equate to further QE (the most likely in our view) and possibly a switch to yield curve control (YCC), a revamp of the threat of negative rates (although the credibility risk may start to become an issue here) but also an introduction of the theme of FX interventions," warns ING's Pesole.

New Zealand has come close to eradicating the coronavirus and so the economy has reopened and is operating without the same degree of ongoing disruption seen in Europe. The result has been GDP growth that left the economy 0.4% larger in the third-quarter this year than it was at the same time in 2019, although New Zealand's location near to China and other parts of Asia as well as deep trade links with those faster growing markets have also helped.

Nonetheless, the most significant stimulus could yet be ahead of the economy. This is because with vaccines expected to be rolled out in New Zealand next year, the country could soon find itself in a position where the national borders and large tourism sector are able to also reopen for business. Tourism normally contributes more than five percent to Kiwi GDP in a given year, although ING's Pesole says the sector also makes a further 4% of indirect contributions to GDP too.

"Of course, A/NZ still face a serious risk of a widespread ‘third wave’ of infections – particularly if the public becomes complacent about social distancing – but this is not our base case given authorities appear to have learnt from previous errors related to traveler-quarantine and contact tracing," says Andrew Boak, CFA and Sydney-based economist at Goldman Sachs. "A large pool of savings and plentiful fiscal capacity will backstop A/NZ’s recovery, but until an effective COVID vaccine is available the balance of risks to our constructive outlook are skewed to the downside. We estimate 2021 GDP growth in A/NZ would be ~50bp lower in a scenario where mass immunization is delayed 6 months to end 2021 – with this headwind intensifying to ~400bp should the delay be accompanied by another wave of infections and national lockdowns. We are also mindful of downside risks stemming from geopolitical tensions with China, economic ‘scarring’ from the crisis, and the potential premature withdrawal of fiscal stimulus."