According to analysts at global investment bank MUFG, the New Zealand Dollar would typically be expected to underperform its major peers during times of equity and commodity market anxieties, which have gripped markets for the past two weeks given fears the global economic recovery has stalled owing to the growing covid-19 pandemic.

"Our FX stance is the pattern of FX performance throughout most of June may well continue with risks skewed more to the downside for equities. A correction in equities from here could see the high-beta currencies that have helped up so far underperform – so NZD, AUD and SEK could see greater depreciation than what we have seen so far in June," says Derek Halpenny, Head of Research at MUFG.

MUFG hold a short-term bearish view on the New Zealand Dollar as the currency is looking unjustifiably perky given the fundamental backdrop.

The New Zealand Dollar is in fact one of the best performing major currencies during the recent period of 'risk off' investor sentiment that has seen markets consolidate at best, and fall at worst: typically we would expect the New Zealand Dollar to be at the bottom of the pile in such scenarios.

If we look at the below graph detailing the NZD's performance relative to other currencies of the past month we can see it is behind the Swiss Franc and Japanese Yen, which will immediately strike as odd given that the Yen and Franc are the two gold-standard safe haven currencies. 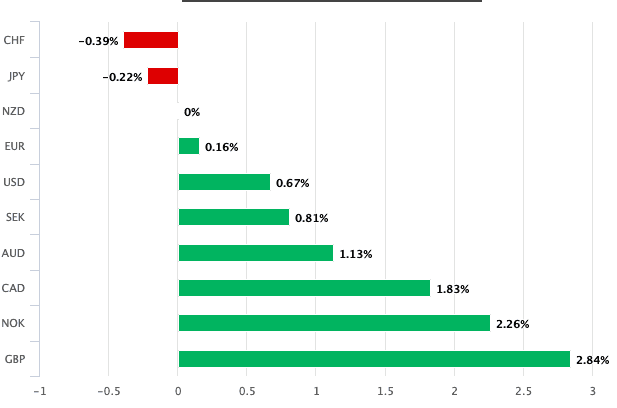 We would typically expect NZD to be at the bottom of the pile and in the company of the Australian Dollar and Norwegian Krone.

In essence, the New Zealand Dollar is carrying a premium into any more protracted market correction which puts it at risk of a 'catch up' move lower.

"The alarming spread of COVID could soon become evident in consumer confidence data and a growing number of states re-instating restrictions could start to impact consumer discretionary stocks and be a trigger for a clearer riskoff move," says Halpenny.

However, analysis from ANZ Bank shows that a consolidation in the New Zealand Dollar is already underway with late June seeing the currency's run higher halted. According to analysts, July could offer more of the same for the currency.

"June brought some stability to the FX market, with the USD finding some support and cyclical currencies like the AUD and NZD consolidating, after a breath-taking rally. Risk appetite and the equity market remained firmly in control of the direction of FX markets, and it was a more cautious tone in those markets that prompted the consolidation," says Daniel Been, Head of FX and G3 Research at ANZ Bank.