- GBP/NZD topping out in risk-averse market as losses loom.

- GBP now underperforms NZD in the good times and the bad.

The Pound-New Zealand Dollar rate is in the process of topping out and could soon  target the 200-day average while risking a move below it despite the Reserve Bank of New Zealand (RBNZ) dealing a blow to the Kiwi this week.

Sterling was underperformed by only the Swedish and oil-linked Norwegian Kronas in a risk-averse market Thursday, with even the commodity-backed and China-sensitive antipodeans outperforming a whimpering and wavering British unit that's a bit of a problem child in the major currency barrel.

New Zealand's currency ceded ground to King U.S. Dollar and the safe-haven Japanese Yen while also being outbid by the Canadian Loonie, but it was higher against all other major rivals including Pound Sterling on Thursday in spite of a best effort by the RBNZ to reign in the comeback Kiwi.

"The NZ Govt. surprised markets with a much more expansionary pre-election Budget which added an extra rescue package of some NZD50bn to existing support and entrenched further budget deficits in coming years with resultant increases in debt issuance," says Tim Riddell, a strategist at Westpac in a research note. "The easing bias of BoE was underscored by Gov. Bailey, though he did not endorse NIRP in his media appearance, and is likely to do so again in his mid-day speech today and so along with recent weak data, the UK’s slow path out of lockdown and bubbling Brexit tensions, GBP has remained soft." 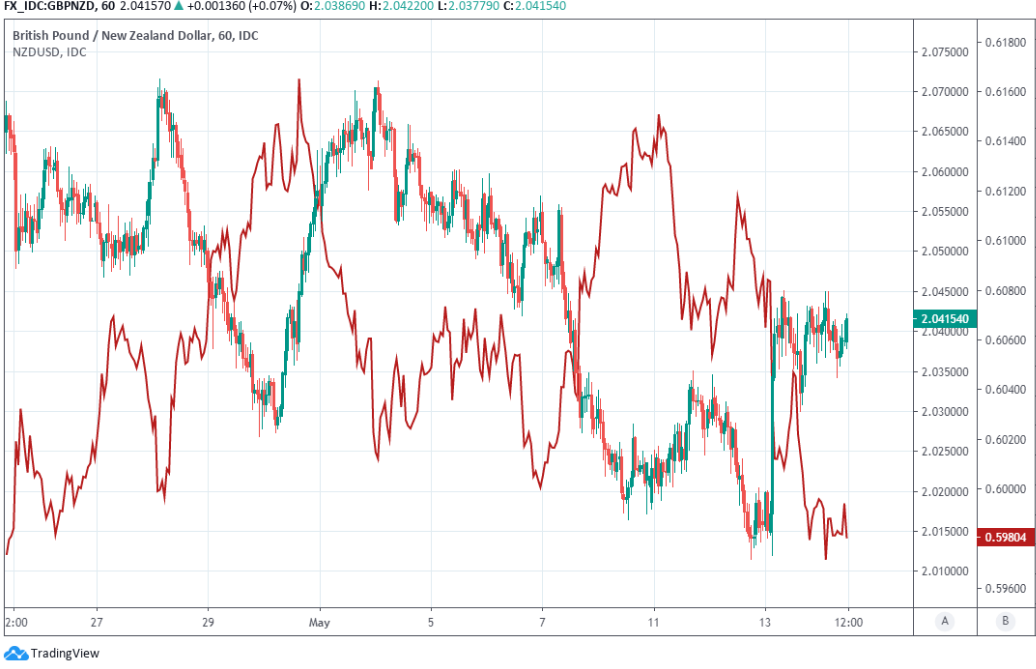 The New Zealand Dollar has been a frequent outperformer alongside its Australian cousin since the antipodean countries managed to get a grip on an all-but vanquished coronavirus long before Europe, the U.S. and UK. This combined with a reopening Chinese economy and a public balance sheet that appears in rude health when stood alongside those of the UK, U.S. and European countries has been a gamechanger for the New Zealand Dollar and could remain so even in the face of RBNZ objections.

RBNZ Governor Adrian Orr said overnight that the bank has a quantitative easing limit and not a target, just hours after increasing that limit from NZ$30bn to NZ$60bn, which will permit the bank to buy up around half of an increasing stock of New Zealand government bonds. This was after warning earlier on Wednesday that the bank could yet resort to a negative interest rate policy, which hurt the previously-recovering Kiwi Dollar despite widespread doubt in the market that such a move is likely to be necessary - or helpful.

"The budget deficit is expected to surge to 10% of GDP in 2019/20 and ease rapidly to 1.3% of GDP in 2023/24.  Debt issuance is expected to surge to $NZ60bn in 2020/21, much more than the consensus expectation of $NZ45bn. Yesterday’s decision by the RBNZ to increase its asset purchase from $NZ33bn to $NZ60bn will do much to offset the burgeoning debt issuance requirements of the New Zealand government," says Joseph Capurso, a strategist at Commonwealth Bank of Australia. 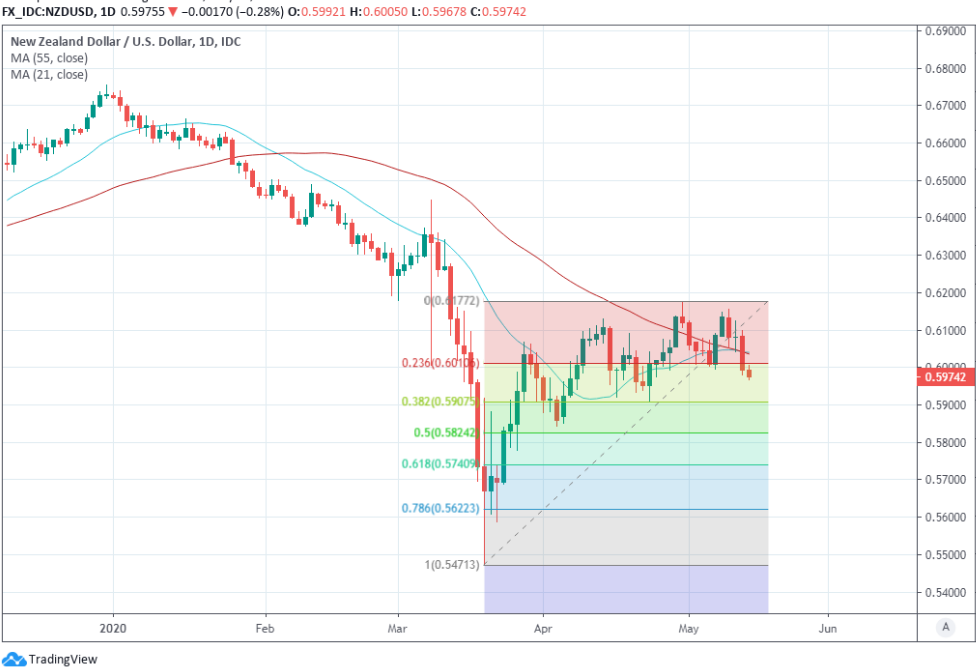 Above: NZD/USD daily chart with Fibonacci retracements of March rebound, with 21 and 55-day moving-averages.

Thursday's early price action demonstrates how in a coronavirus plagued world, the Pound can do as badly if-not worse than New Zealand's Dollar whatever the weather in terms of investor risk appetite.

The Pound-Kiwi rate edged lower despite a risk-averse investor mood Thursday and although still up 4% for 2020, the exchange rate was lower than the 2.0580 levels prevailing in March when the virus began to close down the global economy. Moving-averages near 2.05 could be targeted in the short-term but will now offer resistance to Sterling upon any move higher. 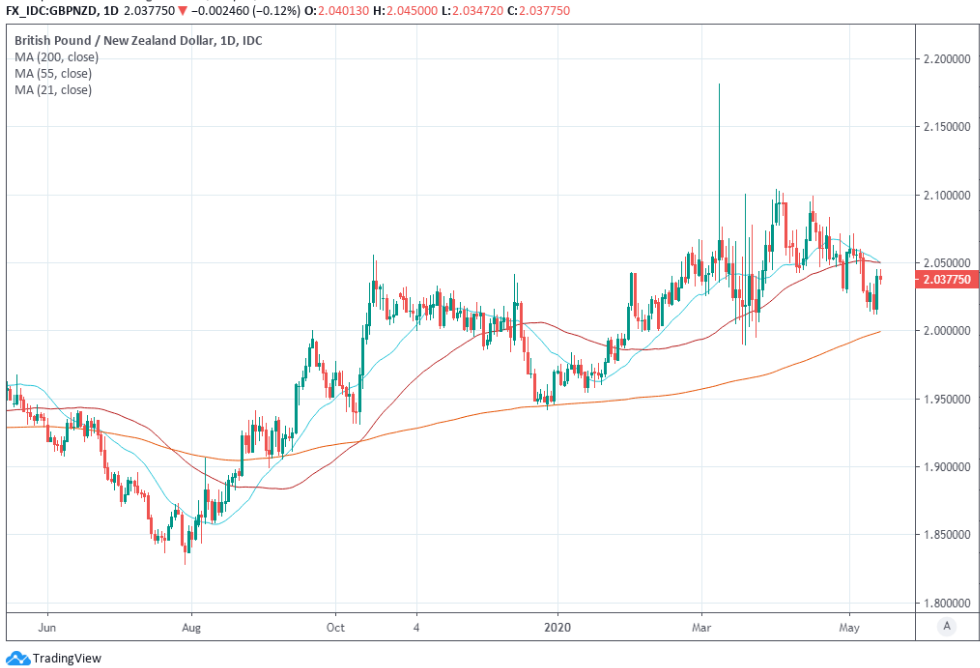 There is no shortage of reasons for Sterling's sudden loss of fortune but irrespective of those, the upside is also now roadblocked by the 21 and 55-day moving-averages near 2.05 while analysts are tipping the GBP/USD rate to hit 1.20, which implies a Pound-New Zealand Dollar rate of 2.0314 when accompanied by an NZD/USD rate of 0.5907.

That means Thursday's levels could be pretty much as good as they get for Sterling denominated Kiwi Dollar buyers without a catalyst for gains by the Pound. An early end to the UK 'lockdown' or request from Downing Street for an extension of the Brexit transition would suffice, although neither is within the base case forecast of very many firms followed by Pound Sterling Live.

In the absence of that catalyst, pressure on the Pound could continue to build as the June month approaches and as the upside risks to a coronavirus-free Kiwi are built atop the foundations of a global economic recovery.

The economic recovery will be uneven for countries and currencies given differing national timeframes for lockdown exits and even larger differences in the health of national balance sheets, although New Zealand is a top scorer in both classes while Sterling is more or less bottom of the bucket. 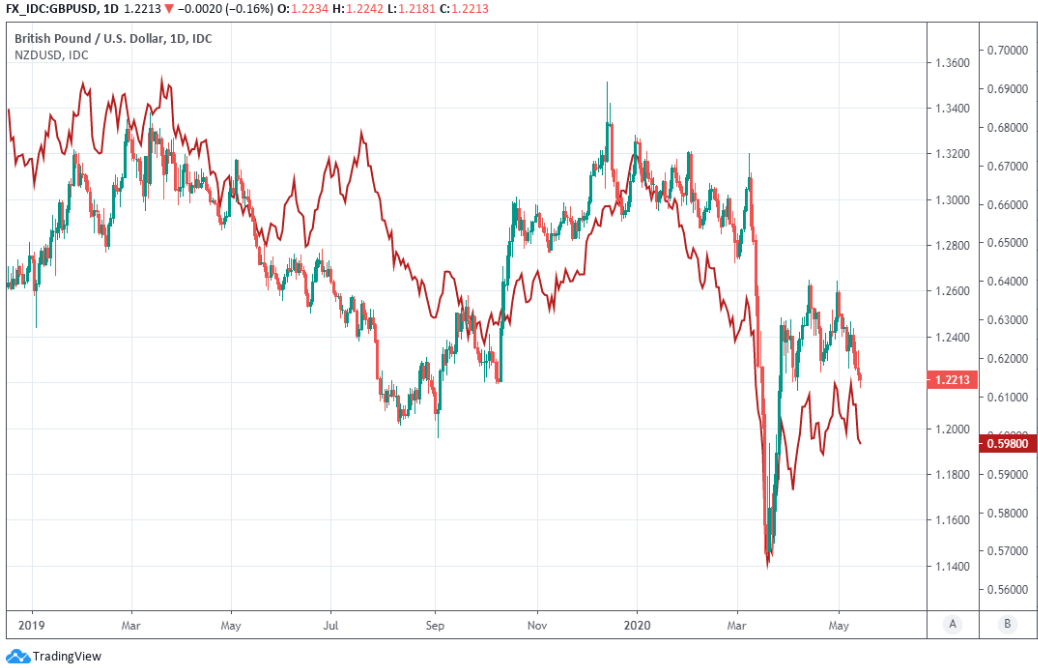 This is bad for the Pound-New Zealand Dollar rate because it raises the spectre of a Kiwi recovery that plays out in NZD/USD as Sterling languishes near current depressed levels of GBP/USD or even falls to new lows.

An NZD/USD rate that's incited by an eventual improvement in risk appetite into a fresh test of Tuesday's 0.6114 level, which is also the 50% Fibonacci retracement of the 2020 downtrend, would produce a Pound-New Zealand Dollar rate of 1.9627 if the analyst community's bearish view of a 1.20 GBP/USD rate plays out in the coming weeks.

A fall to 1.9627 will have taken the mean-reverting Pound-to-Kiwi rate below the 200-day moving-average at 1.9994 and could act as a firm floor for the exchange rate so long as further GBP/USD losses are averted, which is not necessarily assured given the Pound has already been as low as 1.1409 against the U.S. Dollar this year. 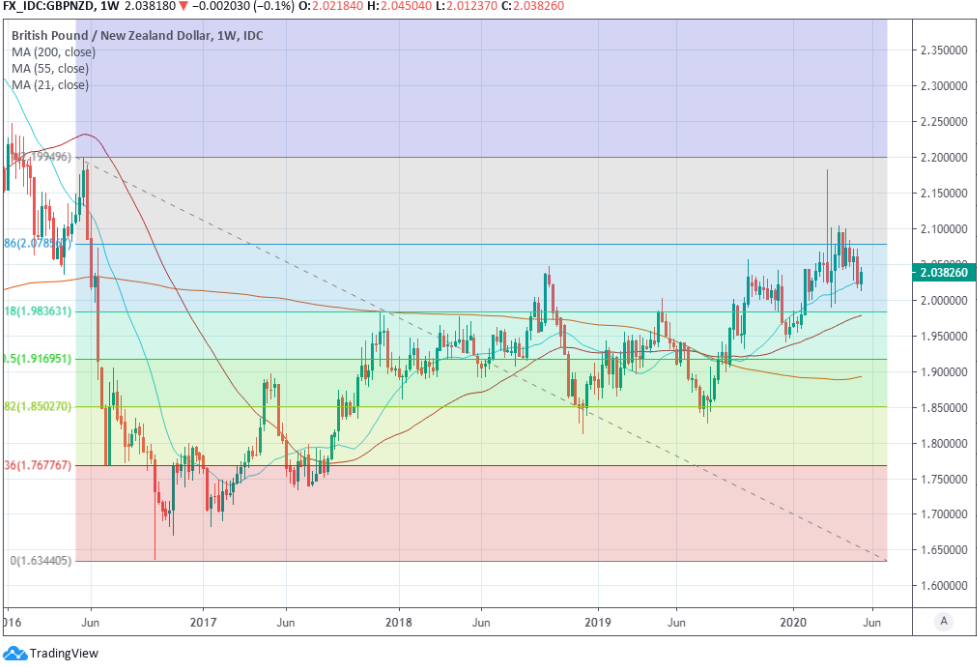 Above: GBP/NZD at weekly intervals, fails to sustain 2020 move above 78.6% Fibonacci retracement of 2016 downtrend.