- Assumption is now that no RBNZ cuts likely in months ahead.

- But uncertain impact of coronavirus is risk to growth and NZD. 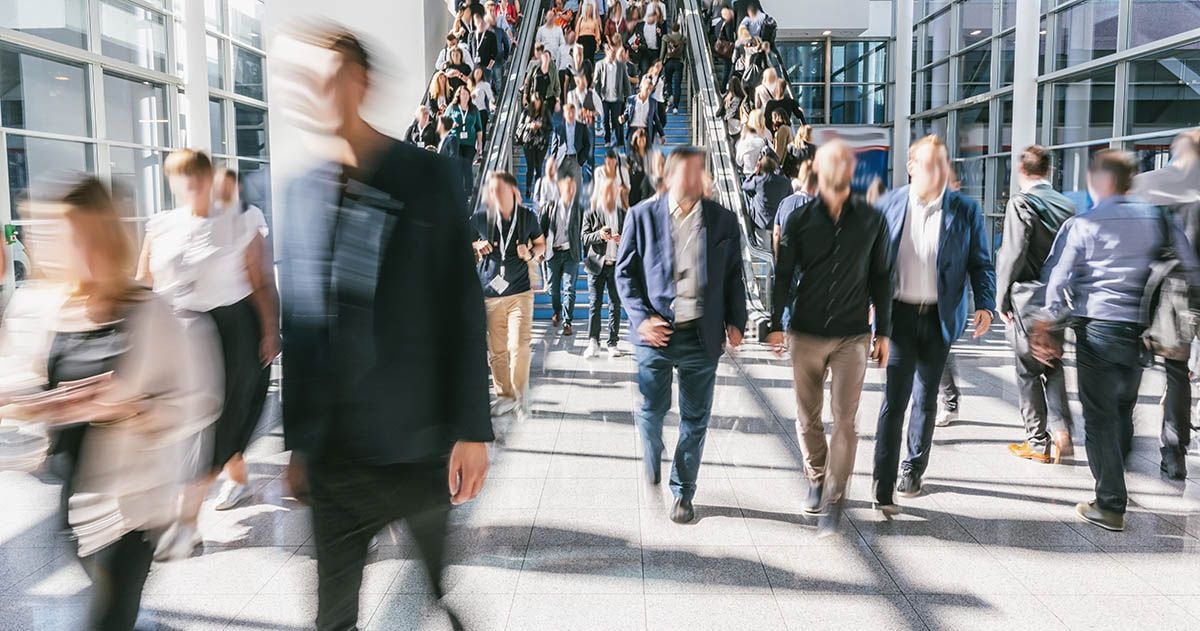 The New Zealand Dollar underperformed Wednesday even as a surprise fall in unemployment lifted market-implied cash rates for the Reserve Bank of New Zealand (RBNZ) throughout the 2020 year, enabling the Pound-to-New-Zealand Dollar rate to remain supported close to its post-referendum high.

Final quarter jobs figures were a mixed bag for markets, with a surprise fall in the jobless rate being offset by stalling employment growth. Jobs growth was 0% in the final quarter last year although the unemployment rate fell from a downwardly-revised 4.1% to 4%, its lowest since the middle of 2008.

And wages grew by 0.6% quarter-on-quarter and at an annualised pace of 2.6%, with both being ahead of market expectations, although the Kiwi Dollar was only able to rise against safe-haven currencies on Wednesday and underperformed other 'risk' rivals like the Aussie and Pound Sterling.

"The unemployment rate dropped to 4.0%, but was largely driven by a fall in the participation rate to 70.1%. Employment growth was unchanged over the quarter," says Kim Mundy, a strategist at Commonwealth Bank of Australia. "Our ASB colleagues continue to expect another rate cut in May 2020 because of downside risks. However, the risk is that the RBNZ has already done enough to stimulate the economy and will hold off rate cuts over 2020, supporting NZD." 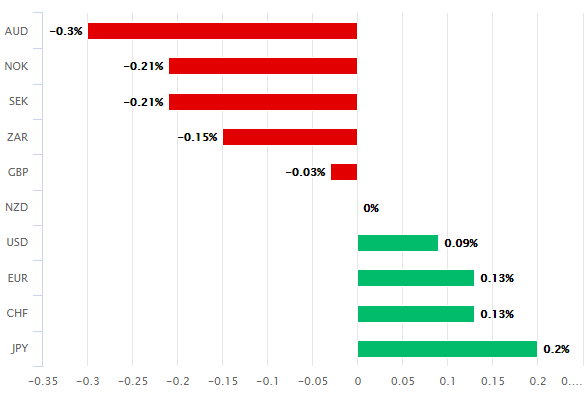 New Zealand's economy is now by all accounts, close to the "full employment" coveted by inflation-targeting central banks, which should mean that wages soon begin to rise and in the process support a return of the consumer price index above the midpoint of the 1%-to-3% inflation target.

Full employment and at-target inflation is what the RBNZ wants to see and the prospect of such objectives being realised is why investors bet Wednesday there's now a lesser chance of a fourth rate cut coming in 2020.

The RBNZ cut rates three times last year, taking the cash rate from 1.75% to 1% as it sought to protect the domestic economy from a global slowdown and meet its long-elusive inflation target.

However, the bank hinted in November that the bar for additional rate cuts is now rather high, prompting the markets to pare back earlier bets suggesting it would cut rates twice this year. That trend continued on Wednesday and the assumption is now that not even one rate cut can be taken as a given.

"For the RBNZ, these data reaffirm a strong starting point relative to the November MPS, with inflation and the labour market in a comfortable position. The RBNZ can afford to be patient and see how developments unfold, in light of emerging and highly uncertain global risks associated with the tragic new coronavirus," says Miles Workman, an economist at ANZ. 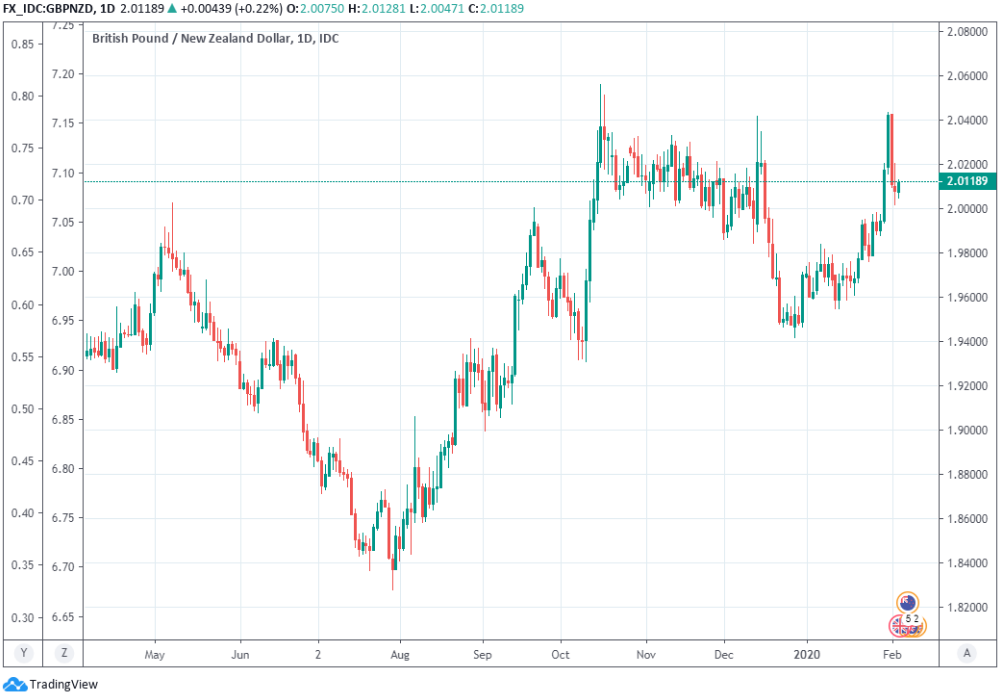 "Markets are still leaning towards a cut, but pricing in the OIS curve isn’t really all that aggressive," says Bipan Rai, North American head of FX strategy at CIBC Capital Markets. "Much like the AUD, some consolidation is needed for NZD/USD before directionality is to be determined either via incoming data or the central bank’s bias at the upcoming meeting. For now, our bias is to remain flat and we’ll reassess if NZD/USD breaks below 0.6400."

Current pricing suggests strongly that markets see only a minor probability of another rate cut this year and that's not until near to year-end, although a February pricing-out of that potential might still be positive for the Kiwi.

"We expect the RBNZ will abandon its strong easing bias and move to a more neutral monetary policy outlook," says Bill Evans, chief economist at Westpac. "The RBNZ will also take comfort from the general improvement in global economic sentiment over recent months, even though the actual economic data remains weak and the coronavirus poses a new set of uncertainties."

Tuesday's jobs data came amid still-elevated concerns over the spread of a new coronavirus in China, which has turned cities into ghost towns across the world's second largest economy and is threatening to deal a severe blow to it in the first quarter. That would have consequences that stretch way beyond the borders of China and certainly as far as the Kiwi capital Wellington.

"The Wuhan virus – and the extensive efforts to contain it – will deliver a substantial hit to growth in China over the coming months and poses a more significant threat to the global economy and world markets than has been the case with previous epidemics. But beyond this, we're left facing more questions than answers," says Neil Shearing, chief economist at Capital Economics. 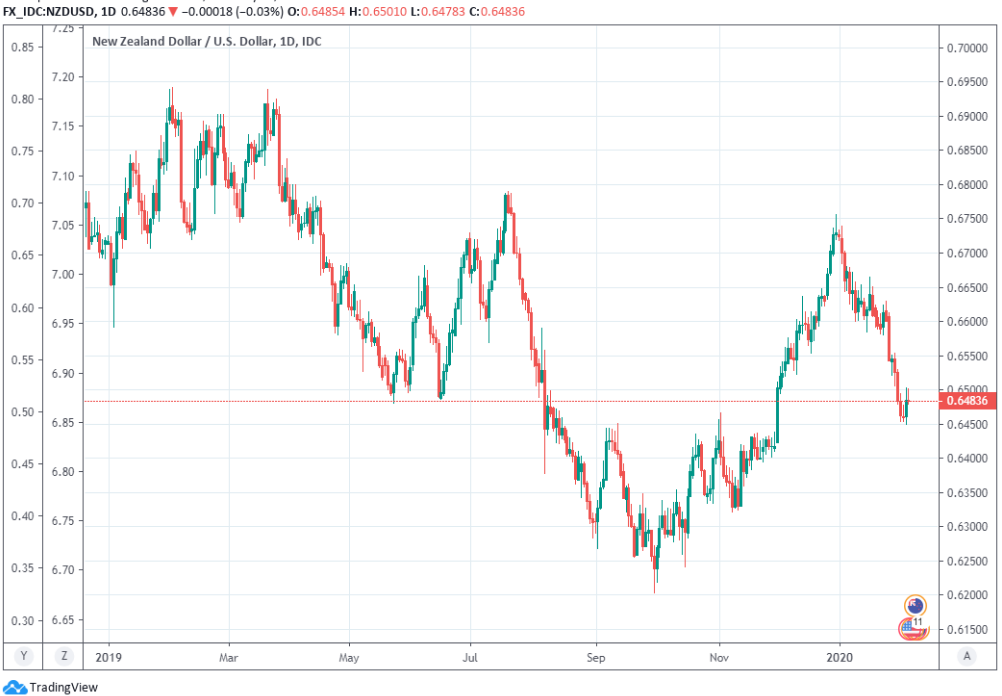 Markets are hoping the coronavirus epidemic in China will prove short-lived and that the subsequent return to normal will be quick, which are sentiments that might have been encouraged overnight by the latest declarations from the National Health Commission. Infections were at 24,324 as of midnight Tuesday, up from 20,438 the previous day, while the number of fatalities rose from 425 to 490, marking a slower rate of increase than that observed in prior days.

However, Taiwanese daily Taiwan News reported Wednesday that the true number of infections in China could be as high as 154,023 and the number of deaths as high as 24,589.

It cited information that was momentarily displayed on a Tencent electronic board that implies a mortality rate of more than 15%. That's somewhat different to the low-single-digit mortality rate purported by official numbers.

Wednesday is reportedly the third time that Tencent numbers have been drastically higher than those of the National Health Commission. Official numbers have each day implied remarkably uniform and stable growth rates for infections and deaths, with last week's pattern showing numbers increasing by around 30% in each category on a daily basis only for the growth rates of each to then decline to around 15% thus far this week.

"Data due in the next week or so should give a better sense of how badly economic activity has been hit by the outbreak. And given the incubation period of the virus, the effectiveness of the containment efforts will also start to become clearer, providing clues to how long-lasting the disruption is likely to be," says Julian Evans-Pritchard, a senior China economist at Capital Economics. 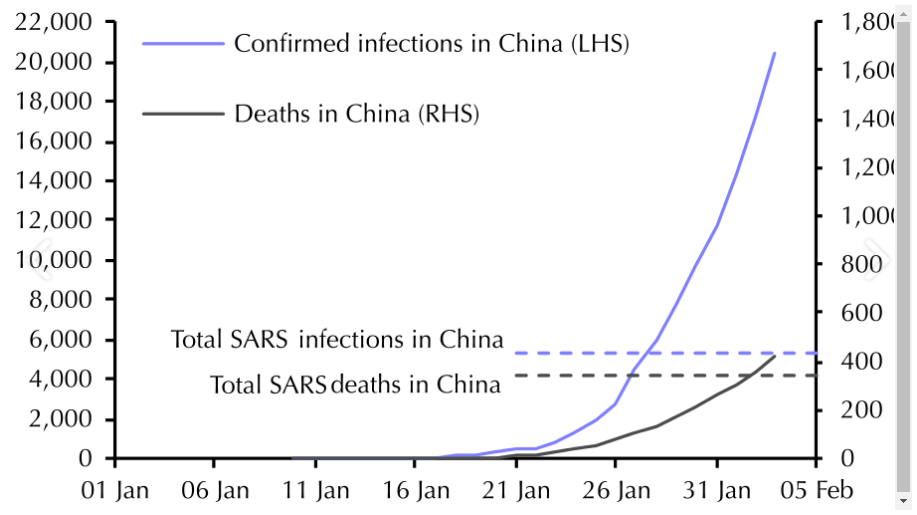 Above: Capital Economics graph contrasting coronavirus infection and death numbers with those of SARS.

A Chinese government economist said last week that first-quarter growth could slip below 5% on an annualised basis due to the epidemic while the latest speculation is that the official growth target could fall as low as 4.5%-to-5% for the full year.

And Goldman Sachs economists estimated Tuesday that global GDP growth could slow by 20 basis points as a result of the outbreak, although these numbers are all contingent upon a swift end to the crisis.

New Zealand's largest trading partner is China so the Kiwi currency can easily be influenced by the trajectory of the Yuan, which has been remarkably stable since the outbreak began to gather pace just more than a week ago.

Peoples' Bank of China (PBOC) intervention has helped keep the Yuan stable while the ebbing spread of the infection has incited hope that the worst might now be over, but stability could give way to a sell-off if the infection's spread accelerates again at any point.