The Pound-to-New Zealand Dollar rate is trading at around 1.9906 at the start of the new week, after rising 1.68% in the week before, Sterling has meanwhile advanced a notable 3.75% over the course of the past month.

But, for those looking for further Sterling strength, our technical studies of the charts suggest the pair has reached a key target and resistance level where it is likely to stall and consolidate.

The 4 hour chart - used to determine the short-term outlook, which includes the coming week or next 5 days - shows how the pair has risen up strongly all through September to its medium-term target at 2.0000, at the level of the May highs.

The pair has completed a wave of buying and there is a good chance it will pull-back from here as traders book profits on their bullish trades.

We see a fairly strong chance the pair will begin to correct back down to perhaps as far as the 1.95-96 region from here and begin to trade sideways.

Overall the short-term trend remains bullish, however, so the pair will probably eventually go higher again but right now it is very mature and due a pull-back.

This is reflected in the RSI momentum indicator in the lower panel, which is in the overbought zone above 70 when this happens it is often a warning sign the pair may be due to correction.

Despite these bearish signs, the trend is still bullish so the pair could still go higher and a break above a confirmation level at 2.0050 would provide confirmation for a continuation higher regardless of other signs.

The daily chart meanwhile shows how the pair has risen in a ‘measured move’ price pattern which has now unfolded to completion. 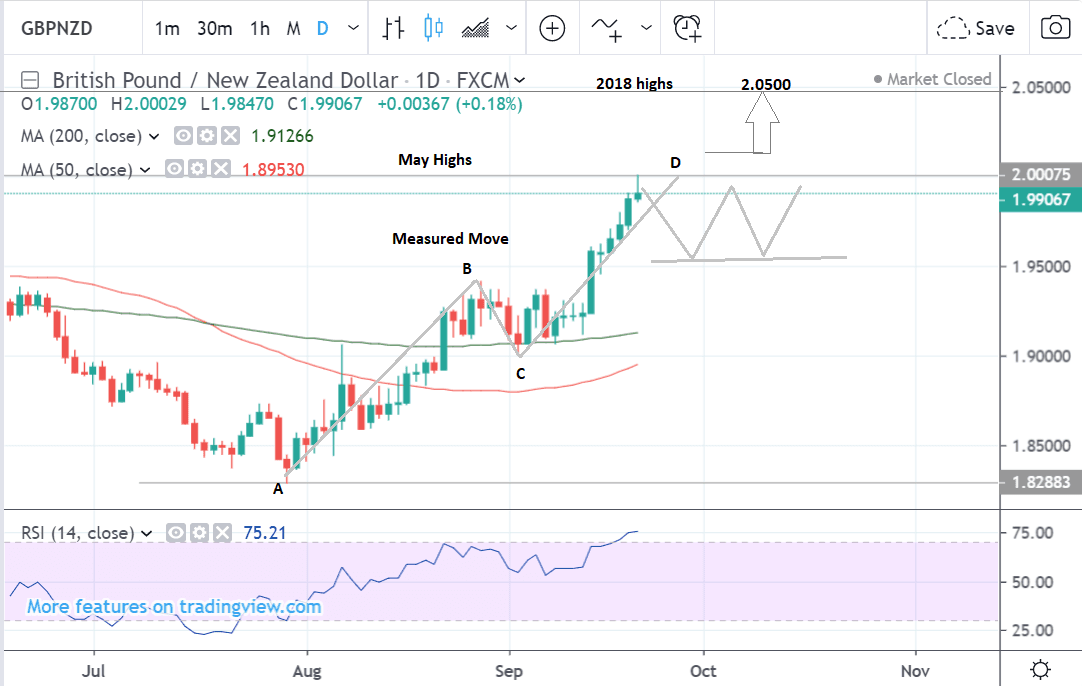 The c-d wave of the pattern has reached its endpoint target calculated at around 2.000 and the May highs.

The chances are the pair will pull-back from here and range-trade for a while before probably rising higher.

The overall short-term trend remains bullish, however, so a break above a confirmatory level at 2.0500 might provide then green-light for a move - first up to a target at 2.0300 as indicated on the 4hr chart, and then 2.0500.

The weekly chart shows how the pair could eventually rise up to the 2018 highs at 2.0500 if it continues rallying. 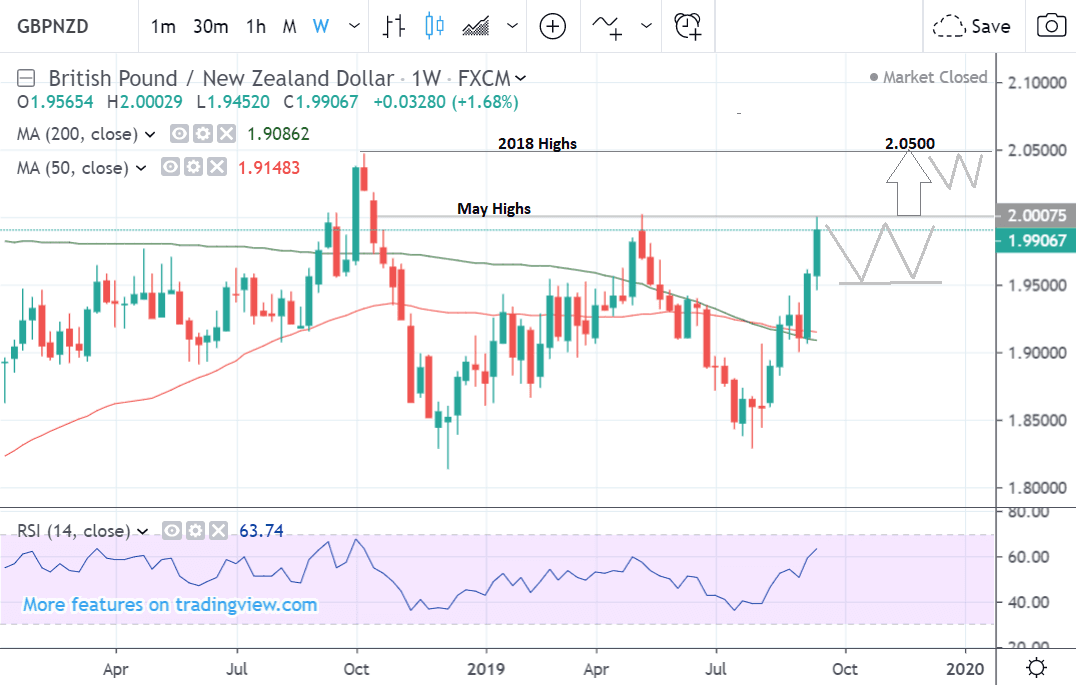 At that point, it is likely to pull-back down and consolidate for a time before potentially continuing higher.

The main event for the New Zealand Dollar in the week ahead is the Reserve Bank of New Zealand (RBNZ) interest rate meeting to decide the Official Cash Rate (OCR) at 3.00 BST on Wednesday, September 25.

The RBNZ is not expected to cut rates at the meeting even though the economy remains subdued and is fully in an easing cycle already.

“We expect no change in the OCR at next week’s review, but we do expect a further cut in November,” says Westpac in their preview piece.

Part of the reason it probably won’t cut its OCR any lower is that the Bank will want to see the full impact of the larger than usual 0.50% cut in August.

The Kiwi should remain supported, therefore, assuming interest rates are not cut any further.

One factor which might impact on the currency, however, is the wording of the statement and whether it gives a warning of further cuts on the horizon or not.

On this point, “the RBNZ will probably use language about the “possibility” of a future cut rather than giving an overt signal of imminent easing,” says Bill Evans, an economist at Westpac.

The reason why central bank policy is crucial to the currency is that currencies are highly correlated to interest rates so when they go up or down the currency often follows.

This is to do with capital flows and how attractive foreign investors perceive currency jurisdictions as a place to park their money, and a large part of that determinant is to do with the interest rate on offer.

Another key driver of the Kiwi is likely to be general global risk appetite which - bar an act of god - is likely to be fairly benign in the week ahead given the UN summit in New York, where foreign dignitaries will want to put on their best and most diplomatic face.