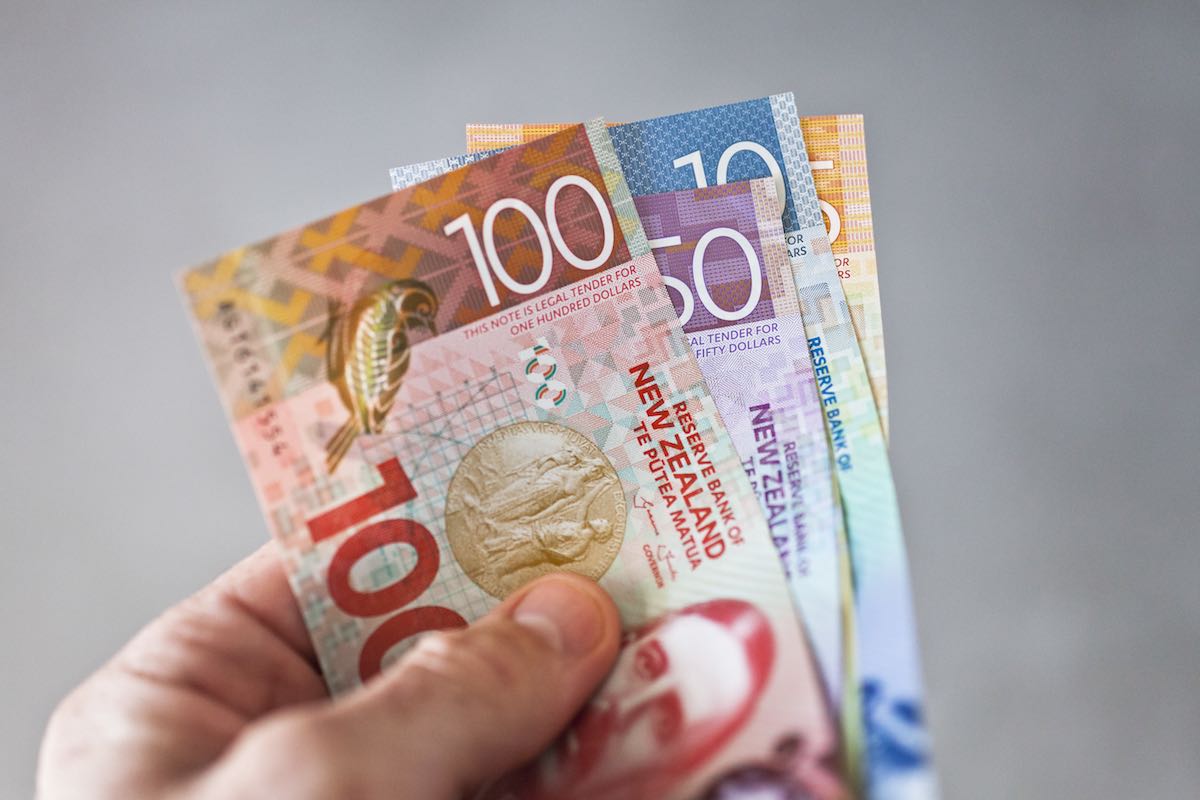 - Break above highs will confirm next wave higher

- Pound to be moved by Brexit news; New Zealand Dollar by risk trends

The GBP/NZD exchange rate is trading at around 1.9288 on Monday, after rising 0.38% in the previous week. Studies of the charts suggest the pair has probably reversed its medium-term downtrend and started a new uptrend which will probably continue rising.

The 4 hour chart - used to determine the short-term outlook, which includes the coming week or next 5 days - shows the pair having recovered since the July 30 lows. 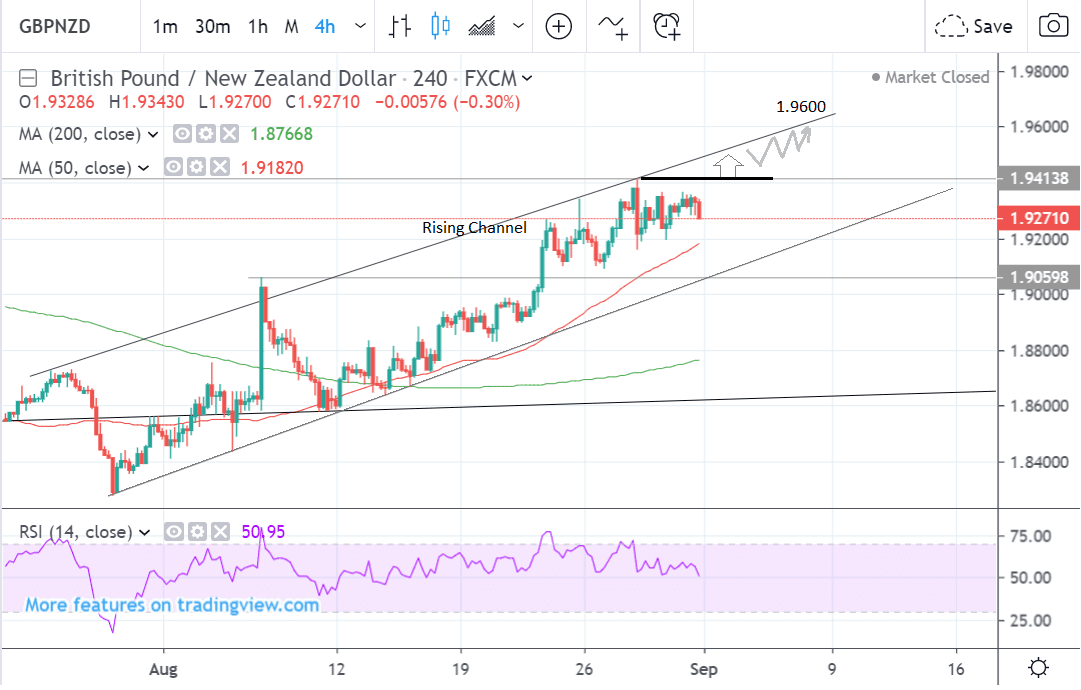 This now suggests the pair is in a short-term uptrend and given the old adage that ‘the trend is your friend’ we expect such an uptrend to continue.

A break above the 1.9415 highs would supply confirmation of a continuation up to a probable short-term target at 1.9600.

The daily chart shows how the pair has risen in an ascending channel, reached the June highs, and then pulled back. 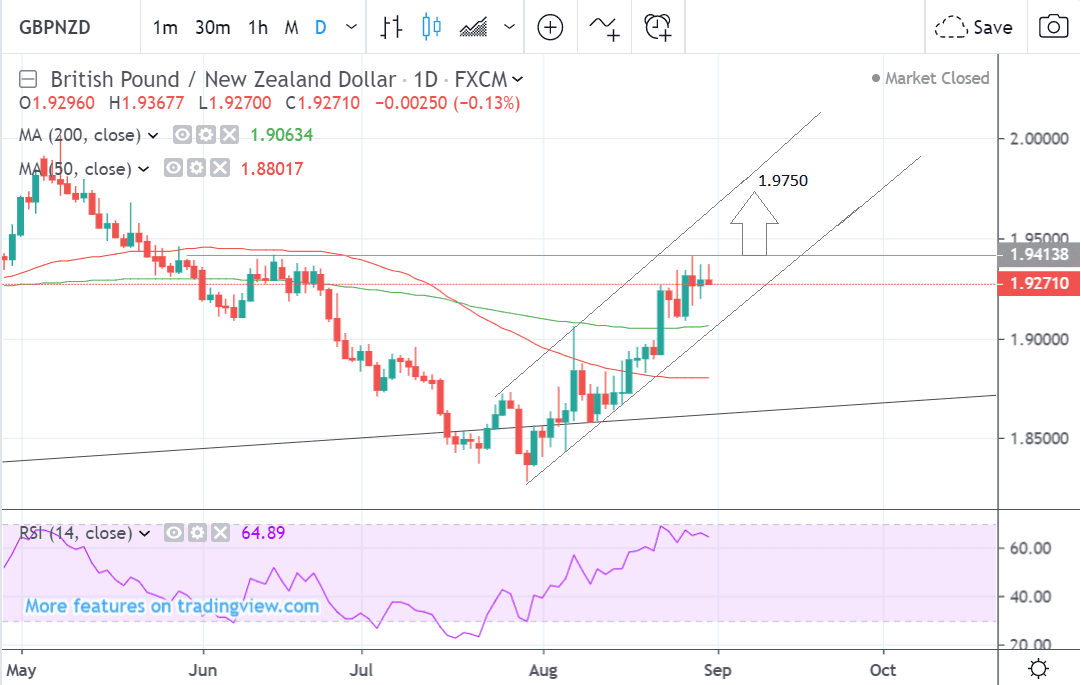 The trend higher since the late July lows will probably continue in the medium-term up to a target at roughly 1.9750 based on an extrapolation of the rising channel.

The weekly chart shows how the pair has rebounded after finding support on a major trendline - it has broken above the 50 and 200 week MAs and is likely to continue rising up to a target at 2.000 and the b-c wave highs. 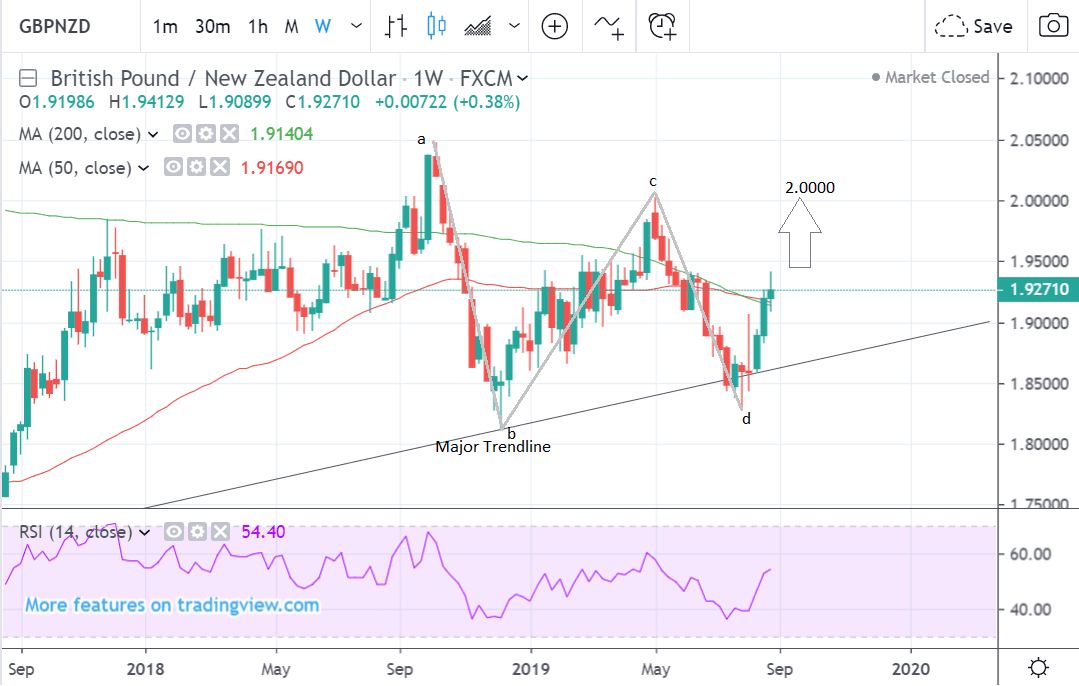 The RSI momentum indicator is rising steeply in tandem with price action showing strong bullish momentum accompanying the rally, which supports the likelihood of a continuation higher.

The New Zealand Dollar: Still a Slave to Risk

The main driver of the New Zealand Dollar is likely to be global risk appetite, geopolitical events and the evolution of the trade war between Washington and Beijing.

On the domestic front, any commentary regarding future monetary policy could also impact on the Kiwi after poor data last week raised the probability the Reserve Bank of New Zealand (RBNZ) might cut interest rates to stimulate the economy, weighing on the currency in the process.

Trade tensions will come into focus after both the U.S. and China implement higher tariffs on each other's goods on September 1.

The market has already priced these in so the next big question is whether President Trump will escalate and stick to his recent threat to raise tariffs even higher - by a further 5% on all $550bn of imports. If he goes ahead the Kiwi will be one of the currencies which will suffer.

Another focus for markets will be China's reaction. So far Beijing has not risen to the bait but if it did retaliate this would rile markets and impact negatively on NZD.

"As a small open economy, New Zealand is at the whim of global forces. Recently, the global growth outlook has deteriorated further and trade tensions have escalated dramatically," says Sharon Zollner, Chief Economist with ANZ. "Elevated global uncertainty seems to be weighing on domestic firms’ sentiment, investment and employment. Overall, the risks are all looking pretty one sided."

On the domestic front, the New Zealand Dollar reacted negatively to the latest results of the ANZ Business Survey which showed sentiment hitting lows not seen since the great financial crisis.

The ANZ Business Confidence index fell 8 points to -52.3 in August, which continues a two-year trend of increasing pessimism among Kiwi firms and leaves the broad barometer of sentiment at its lowerst level since April 2008. The index has fallen below zero and moved further and further into negative territory since the 2017 election.

"The outlook for the economy appears to be deteriorating further, with firms extremely downbeat despite easier monetary conditions, fairly robust commodity prices, and positive population growth. Whatever the cause, the risk is rising that it becomes self-fulfilling. The decline in inflation expectations from 1.8% last month to 1.7% will be of particular concern to the Reserve Bank," says Zollner.

On the domestic front the week has started off on a bright note with the release of Terms of Trade statistics which saw a rise of 1.6% quarter-on-quarter in the second quarter, which comes in well ahead of analyst forecasts for a reading of 1.0%.

The rise appears to have been driven by a sharp rise in the value of New Zealand exports, to the tune of 3.4%, which offset a decline in the volume of exports to the tune of 2.6%.

Import prices only rose 1.8%, whereas markets were forecasting a rise of 2.0%.

The GlobalDairyTrade auction is due on Tuesday at 15:30 B.S.T.

"The seasonal increase in offer volumes will test the depth of the buying bench. Futures prices indicate a 2.5% fall in the GDT Price Index is anticipated by the market," says a preview note from ANZ.