The British Pound is seen trading higher against the Euro, U.S. Dollar and a host of other major currencies as London markets count down to the weekend, with markets showing a guarded confidence that the UK will avoid exiting the EU without a deal on October 31.

If Pound Sterling can hold its gains, it will have recorded its third successive weekly advance against the Eurozone's single currency.

1 GBP currently buys 1.1058 EUR on the inter-bank market, with retail rates for money transfers starting at around 1.0970.

Politics will likely remain front-and-centre for Sterling over coming hours and days, with markets likely to take cues from parliamentary manoeuvres aimed at preventing a 'no deal' Brexit when it sits again on Tuesday, September 03.

While parliament only sits next week, the press is presently carrying reports detailing potential measures MPs might take when they return to a shortened parliamentary session after the government opted to prorogue the current session of parliament on September 12.

For Sterling, any credible method used by MPs that prevents a 'no deal' Brexit could be taken as positive, and could aid the recovery we have seen in the Pound-to-Euro exchange rate over recent days. 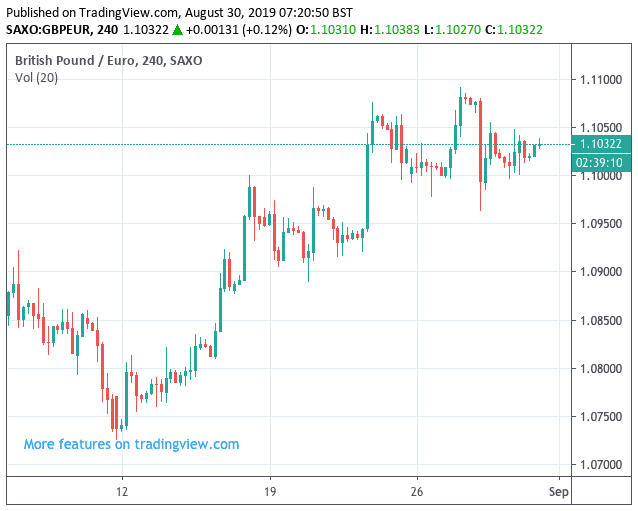 Above: Sterling-Euro has been recovering since mid-August

According to The Times, those MPs opposed to a 'no deal' Brexit believe they can seize control of business in the Commons and pass the legislation needed to force Boris Johnson to request an extension of Article 50.

One Conservative Party rebel told The Times they were considering taking "total control" of the order paper on Wednesday to push through legislation to stop a 'no deal'.

We believe that with a sympathetic speaker - which John Bercow is - MPs would push the envelope on what is constitutionally possible in order to deny the Prime Minister the option of walking away from the EU without a deal.

The Daily Telegraph reports Bercow has broken into his family holiday to phone Remain-backing Conservative MP Sir Oliver Letwin in order to plan a way to prevent Johnson suspending Parliament.

The newspaper reports that Bercow, who is currently in Turkey with his family, has discussed with Letwin methods to fast-track legislation through Parliament to thwart Johnson’s plans.

Letwin is reported to have been drafting legislation with clerks, enabling MPs to take over the Commons order paper before parliament’s return next week.

It is believed MPs could legislate against a 'no deal' Brexit in just three days.

However, MPs are apparently prepared to sit into the weekend if the legislation cannot be passed in three days, thereby overcoming the tight constraint placed on them by Prime Minster Boris Johnson's decision to suspend Parliament the following week.

There is a precedent for sitting on the weekend: The House of Commons has sat on a Saturday at the outbreak of the Second World War, during the Suez crisis of 1956 and the invasion of the Falklands in 1982.

Labour Party Deputy Leader Tom Watson has on Friday afternoon confirmed that the outlines of the legislation that will be put before parliament is in place.

"I have taken advice on legislative solutions to challenge the prime minister’s action to stop us crashing out of the EU without a deal. I am in discussions with colleagues in other parties and a Bill to achieve this outcome has been drafted," Watson said in a statement.

If MPs succeed, we expect Sterling to find further support and GBP/EUR could rally back above 1.11, thereby entering its longer-term range. 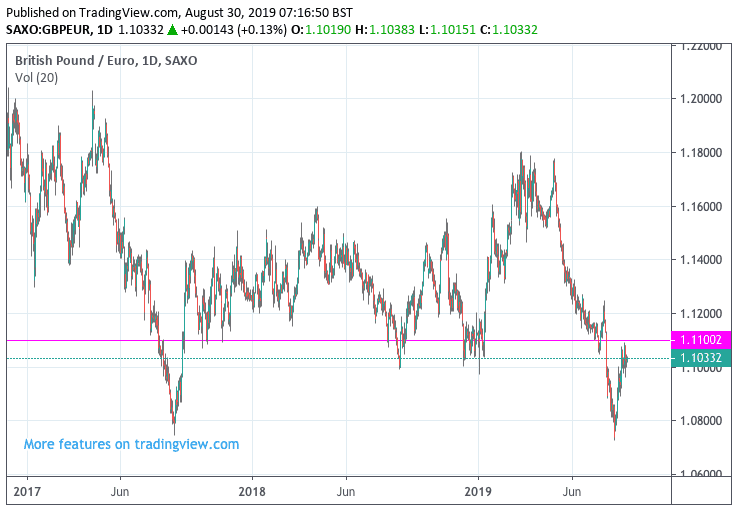 Above: Long-term chart of Sterling-Euro. The exchange rate would likely break back above 1.11 if MPs succeed in effectively making a 'no deal' Brexit illegal.

However we are of the strong opinion that legislating to prevent a 'no deal' Brexit can only offer limited support for Sterling simply because preventing 'no deal' is not in itself a solution to the current political impasse.

We believe that striking a Brexit deal offers the only sustained and long-term route higher for Sterling as a deal represents a settlement that both delivers on the referendum, and prevents a disorderly 'no deal' exit.

By keeping 'no deal' on the table Johnson raises the chances that the EU will renegotiate parts of the existing Withdrawal Agreement, and at the same time MPs are left with no option but to ratify his deal if they truly want to avoid a 'no deal'.

A ratification of a deal would offer a material recovery in the value of the Pound. Further delay and uncertainty brought about by parliament simply saying they don't want a 'no deal', but they won't vote for a deal either, surely only damns Sterling to months of purgatory.

Traders will next week also be watching legal attempts to thwart Johnson's plan to prorogue parliament for a month starting on September 12.

The High Court said a hearing will take place in the Gina Miller Brexit legal challenge next Thursday. The Chief Justice Lord Burnett will hear the application and the court will first decide a request for the case to be heard and if it agrees, then a full hearing will follow, which is likely to last all day.

We doubt the attempt will succeed as there is little by way of compelling argument that the decision to prorogue parliament is technically unconstitutional.