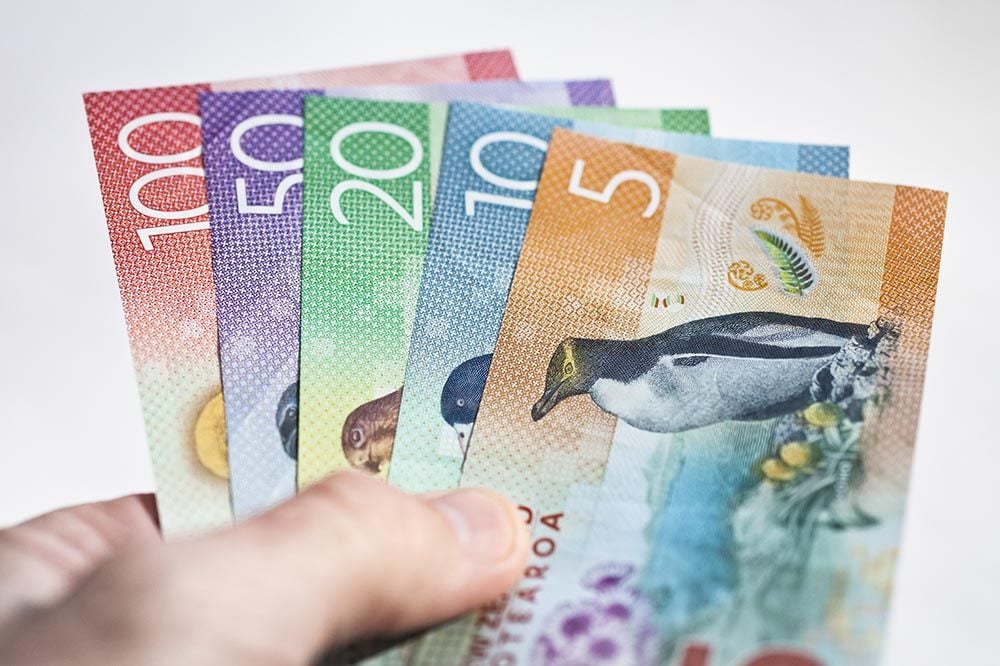 - As trade wars and interest rate environment continue to weigh.

The New Zealand Dollar was weaker in the face of a recovering greenback Thursday and is set for further declines in the week ahead, according to strategists at Westpac, who say a break below a key support on the charts would risk pushing the Kiwi to what would be its lowest level in four years.

New Zealand's Dollar was dealt an almighty blow in the previous session after the Reserve Bank of New Zealand (RBNZ) surprised the market with an interest rate cut that was much larger than any economist or analyst had anticipated, and the legacy of that move is one of the fundamental factors expected to continue pushing the Kiwi lower.

"The surprising 50bp cut from the RBNZ yesterday has caused markets to reassess the RBNZ’s reaction function, such that lower terminal rates are likely to be priced in (currently 0.67%). In addition, QE chatter will intensify," says Imre Speizer, a strategist at Westpac, in a note to clients. 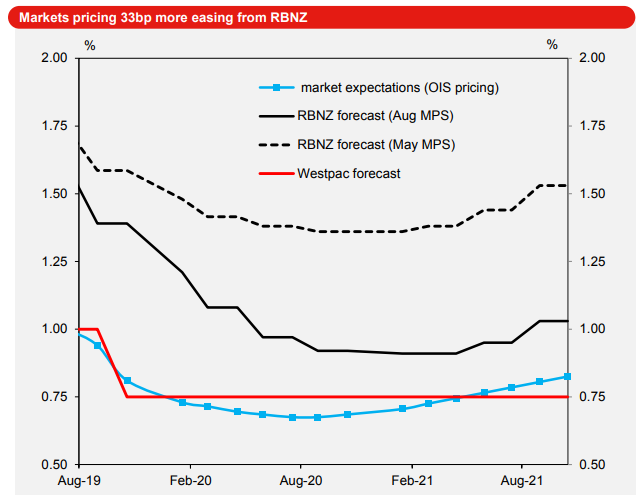 Interest rates in New Zealand are expected to fall even further in the quarters ahead as the RBNZ pursues the additional growth it needs in order to achieve a long-elusive inflation target, which is being made more difficult to attain by the ongoing trade war between the U.S. and China.

The RBNZ said Wednesday it will "leave no powder dry" in its effort to reflate the New Zealand economy, before acknowledging that policymakers have been actively considering unorthodox measures like quantitative easing, which would push Kiwi bond yields and the Dollar even lower.

"On top of that, there’s the more measured easing approach from the Fed which should cause NZUS yield spreads to fall. In addition, a prolonged US-China trade war will benefit the USD and hurt the NZD," Speizer says. 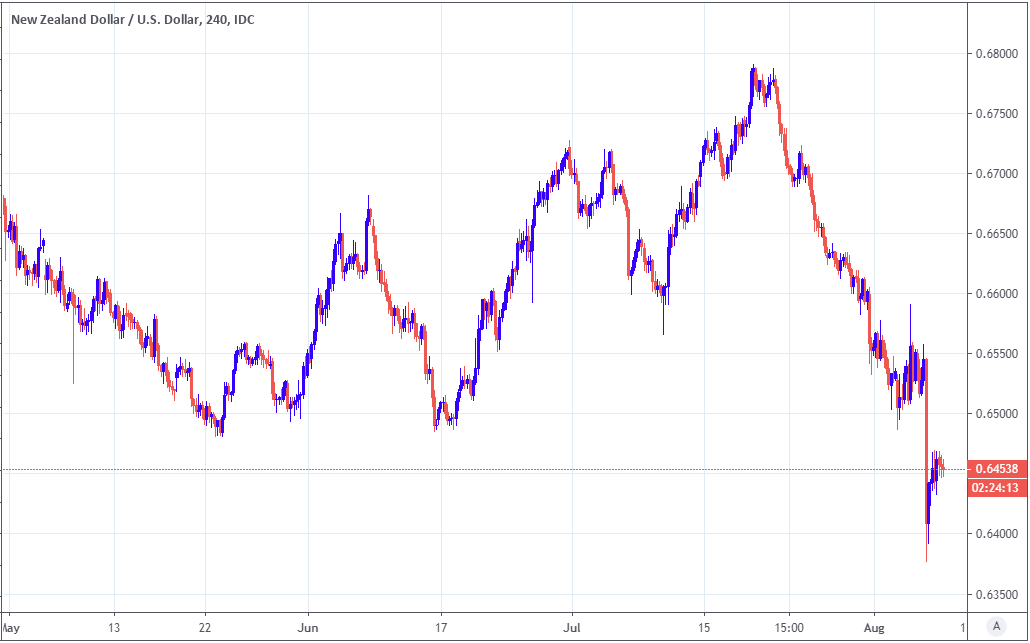 Westpac says the RBNZ will cut its cash rate again in November, marking the third cut for 2019 and taking the cash rate down to a new record low of 0.75%. This will mean Kiwi bond yields fall further relative to those of the U.S.

RBNZ cuts could make ownership of some New Zealand assets less compelling to investors and hurt the currency. It already cost investors 0.83% in forgone returns to own two-year Kiwi government bonds instead of their U.S. counterparts Thursday, when on Tuesday that cost was only 0.6%.

The Kiwi had seen its yield disadvantage against the U.S. Dollar eaten away steadily since September 2018, but that trend may have reversed this week in favour of renewed deterioration. Speizer says the New Zealand Dollar will become more unattractive to investors the Westpac scenario plays out. 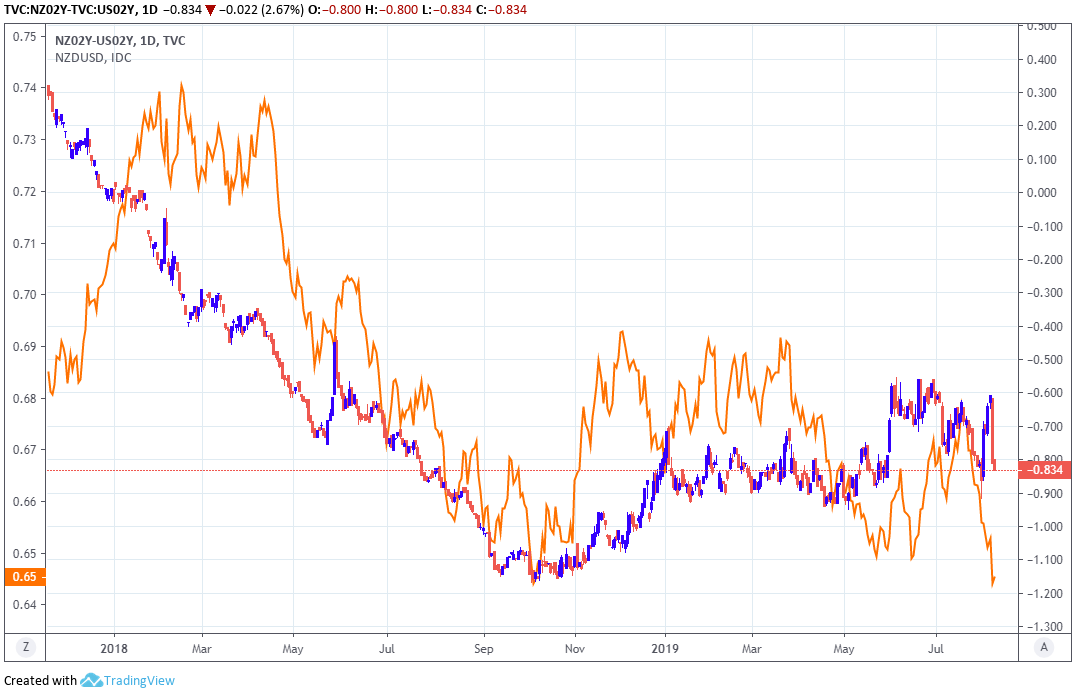 That trade war, which is also now widely expected to escalate even further in the months ahead, is another factor that many say will weigh on the New Zealand Dollar up ahead. However, arguably an equally significant risk of the currency is the prospect of the Kiwi losing its last technical support on the charts.

"NZD/USD momentum remains firmly downward, targeting a break below 0.6380 during the week ahead. Below that there’s some support at 0.6350, but below that there’s clean air until around 0.6200," Speizer writes.

The fundamental factors that are reducing the value of the New Zealand Dollar are expected to continue pushing it lower in the week ahead but there's a danger that losses could snowball in response to the next round of trade headlines if by that time the Kiwi has fallen below 0.6350. Snowballing losses would risk taking the Kiwi down to 0.62, its lowest level since September 2015, which is also the year-end forecast of currency analysts at HSBC. 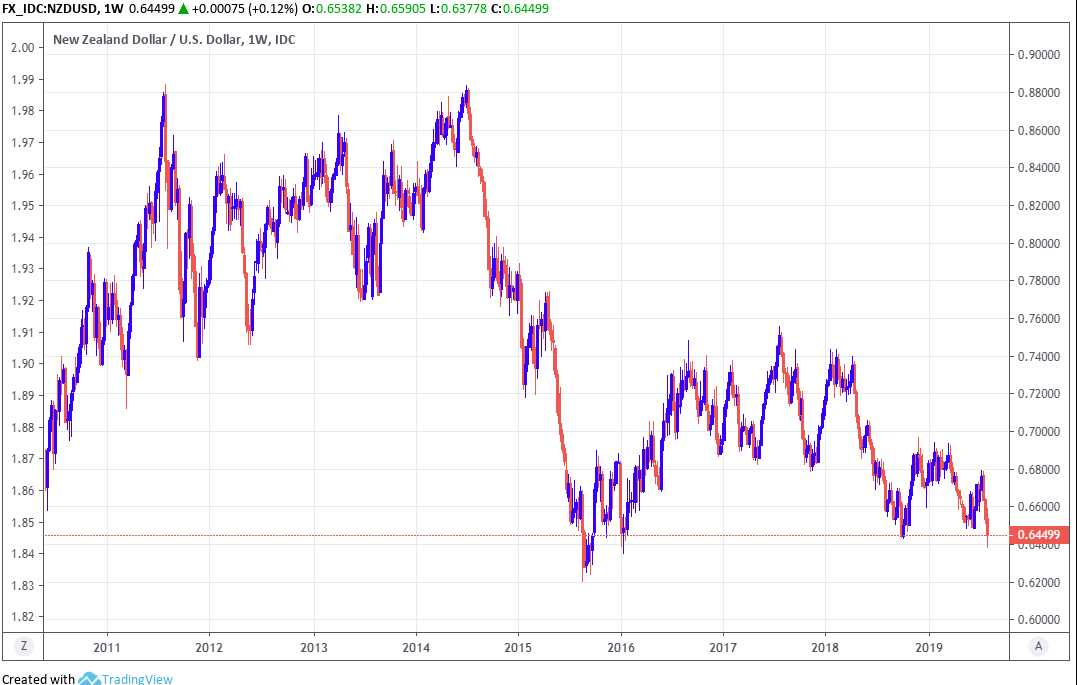 "It’s fair to say that President Trump’s threat to impose 10% tariffs on the $300bn of US goods imports from China that are not currently taxed was not well received in Beijing. Given that the tariffs would not apply until 1 September, there was an initial glimmer of hope that China might not retaliate quickly. Instead, as well as verbal defiance from Chinese officials, Monday brought the long-awaited break of USD/CNY 7.00, the yuan’s weakest levels since May 2008," Speizer says.

Wednesday's rate cut comes at a time when financial markets have been on edge over the prospect of the U.S.-China tariff fight turning into a currency war after the People's Bank of China (PBOC) allowed the Renminbi to depreciate this week. It fixed the midpoint of Wednesday's trading band for the USD/CNY rate at 6.9996 Wednesday, close to the psychologically important 7.0 level the market has traded above all week.

Those lower fixings for the state-managed Renminbi followed a decision by President Donald Trump to target China's remaining $300 bn of annual exports to the U.S. with a 10% tariff from September 01, which some analysts say will rise to 25% sooner or later. Markets are now adjusting to the idea that the tariff fight between the world's two largest economies could go on for some time.