- CBA warns RBNZ rate guidance could weigh on the NZD this week.

The New Zealand Dollar entered the new week on its back foot Monday as commodity currencies followed the Chinese Renminbi lower, although analysts at HSBC and Commonwealth Bank of Australia (CBA) have warned there are more losses in store for the Kiwi unit in the months ahead.

The People's Bank of China (PBOC) set its USD/CNY 'fixing' rate at 6.9220 Monday when the market had been looking for the bank to set the exchange rate below 6.90 in an effort to shore up investor confidence in the its ability to keep the currency stable, prompting a sell-off in Renminbi exchange rates and other correlated currencies.

New Zealand's economy enjoys a large agricultural trade with China, which has seen the Kiwi currency develop a correlation with the Chinese Renminbi, commodity prices and investor risk appetite. And Monday's decision by the PBOC was seen as an indication that further falls in the Renmimbi are likely.

"The PBOC’s willingness to let the renminbi slide suggests that they also do not have much hope, or intent, that both parties can reconcile their differences any time soon. That promises for a clear risk-off mood in markets, with emerging markets, as well as Australia and New Zealand being the most likely victims. Safe havens like CHF and JPY are already seeing inflows," says Michael Every, a strategist at Rabobank. 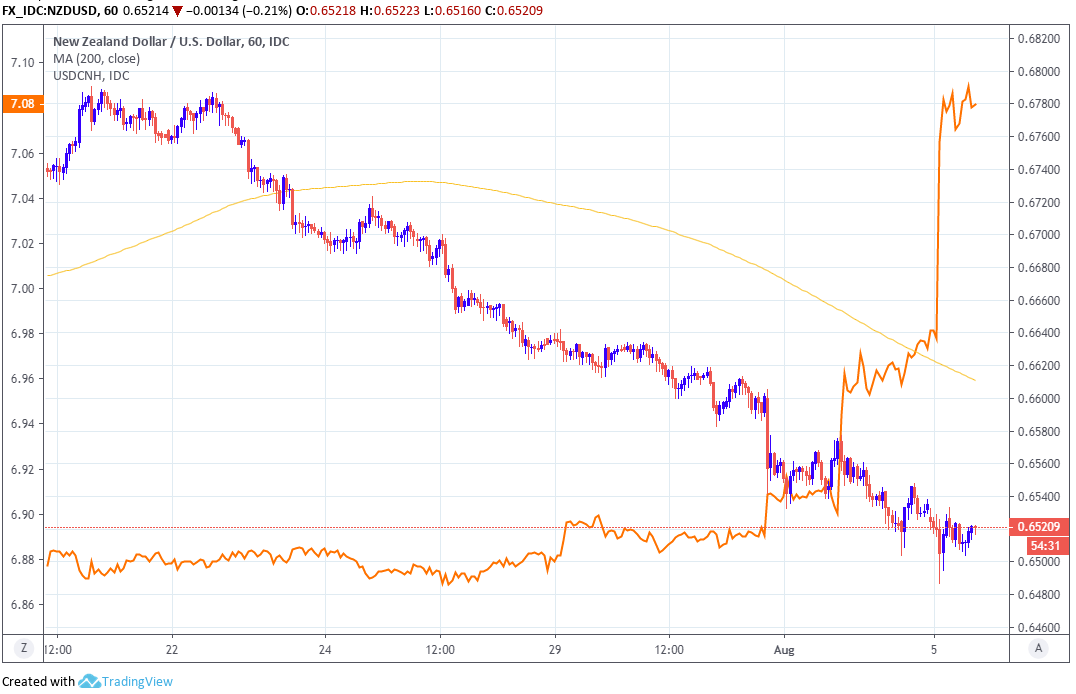 Monday's sell-off came as markets await the release of jobs data for the second-quarter, which investors and the Reserve Bank of New Zealand (RBNZ) will scrutinise closely for signs of the U.S.-China trade fight and ongoing global economic slowdown beginning beginning to impact Kiwi employment. Consensus is for the unemployment rate to have risen from 4.2% to 4.3% during the quarter, in spite of an anticipated 0.3% increase in job creation.

The RBNZ has been battling against below-target inflation for years and resorted in May to cutting its interest rate for the first time since November 2016 in an effort to achieve its price target by boosting the economy. One of the things the RBNZ needs is higher wage growth, which requires a robust jobs market, to get the consumer price index above the midpoint of its 1%-to-3% target

"NZD/USD is also under downside pressure following the sharp depreciation in the renminbi overnight. On Tuesday, the RBNZ is widely expected to cut the Official Cash Rate (OCR) by 25bp to 1.25%," says Elias Haddad at Commonwealth Bank of Australia. "The RBNZ OCR forecasts will most probably show the possibility of a follow‑up cut by late 2019/2020. This can further weigh on NZD this week." 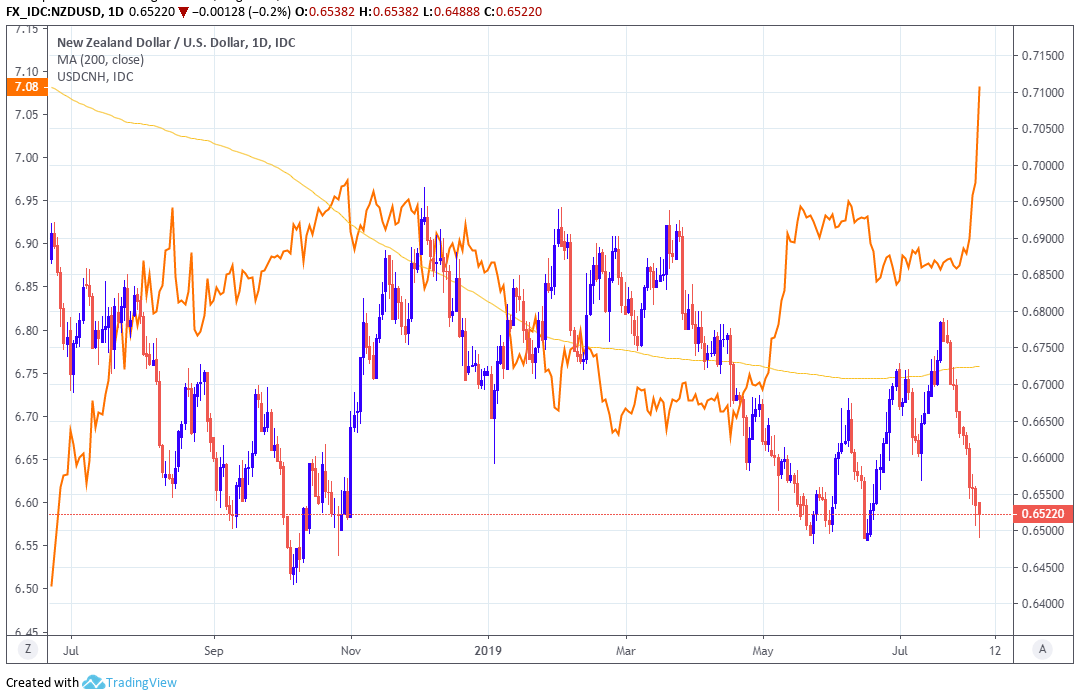 New Zealand's jobs figures will be released at 2345 London time Monday and if they happen to disappoint the market, the Kiwi might find itself struggling on into Wednesday's Reserve Bank of New Zealand interest rate decision, which could also weigh on the currency. The RBNZ will announce its latest rate decision at 03:00 on Wednesday and markets are already looking for a second 25 basis point cut to 1.25% for the cash rate.

Investors and financial markets have already fully 'priced' this move into the New Zealand Dollar so on its own, the decision is unlikely to do any damage to the Kiwi but any indication of further cuts being in the pipeline for later in the year could weigh on the currency. CBA has warned of RBNZ-related losses this week but the Aussie lender forecasts a steady recovery by the New Zealand Dollar into year-end, with 0.68 tipped as the Kiwi's likely end point. Analysts at HSBC are less optimistic in their outlook.

"The central bank was the first developed market central bank to cut rates in May but has since been surpassed by the RBA (two cuts) while signals of imminent easing by the Fed and ECB have also helped to move rate differentials more in favour of the NZD. In fact, the NZD has been the best performing G10 currency since the RBNZ opted to keep policy unchanged at its 26 June meeting," says Tom Nash, a strategist at HSBC.

Nash told clients in a recent research note the New Zealand Dollar is "substantially overvalued" becasue of the May RBNZ decision to cut its cash rate and is forecasting a near 5% fall for the NZD/USD rate before year-end.

Above: HSBC graph showing NZD/USD valuation according to financial models and market price.

Nash and the HSBC team have also warned that the RBNZ is likely to be unhappy about strength seen in the exchange rate since its May rate cut, which was also accompanied by the suggestion that the bank would wait before cutting New Zealand interest rates again.

"We think the strength of the NZD may be approaching the limits of the RBNZ’s tolerance making a 25bp cut likely in August as well as the possibility of renewed FX jawboning," Nash writes.

Nash and the HSBC team have been succesfully betting against the Kiwi since late July, having sold the NZD/USD rate when it was up at 0.6780 and targeted a move down to 0.6510, which is a level that was hit during the morning session on Monday. HSBC forecasts the NZD/USD rate will end 2019 down at 0.92 and the Pound-to-New-Zealand-Dollar rate will close the year all the way up at 2.20. 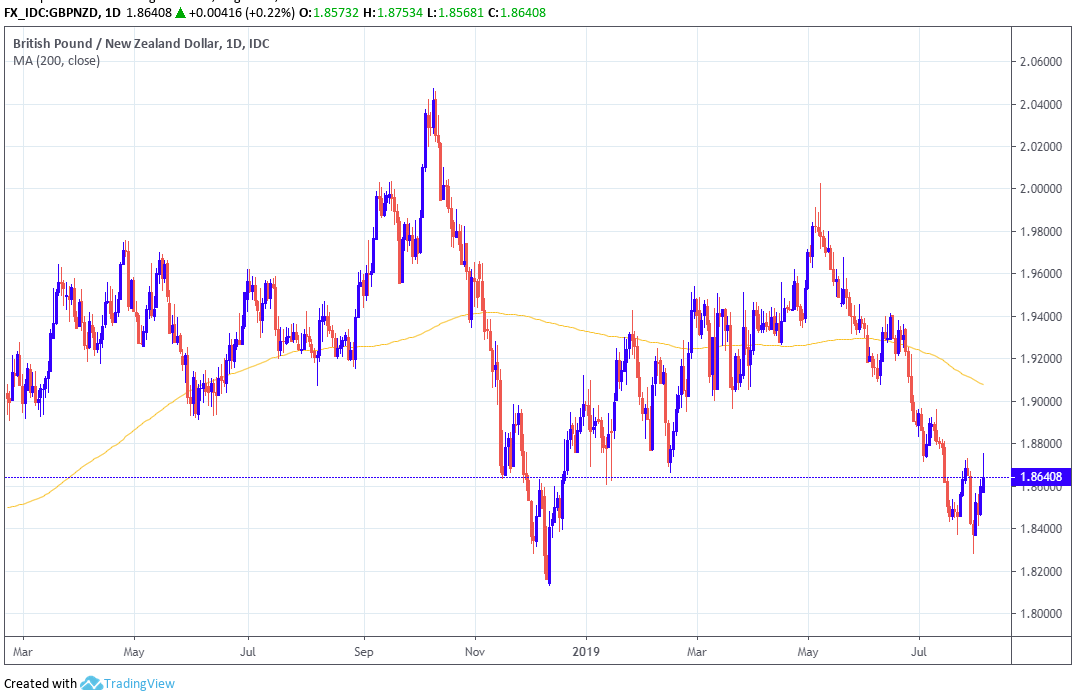