- Unemployment holds at 4% while wages surprise on the upside in July.

- But Brexit still in driving seat for GBP, with markets looking to Brussels.

Pound Sterling advanced further on rivals Tuesday after official data showed wage pressures building in the UK's labour market, while traders also continued to reward signs of progress in the Brexit negotiations with a steady bid for Sterling.

The unemployment rate held steady at a multi-decade low of 4% during the three months to the end of July, in line with expectations, although the pace of wage growth posted a surprise increase.

Average earnings including bonuses across the UK rose at an annualised pace of 2.6% during the period, up from 2.4% previously and ahead of the consensus for steady growth of 2.4%. When bonuses are exluded, the rate of wage growth was even faster, at 2.9%.

There were 32.4 million people in work during the period, according to the Office for National Statistics, which is little changed from the previous quarter but some 261,000 more than in the same period one year ago.

Monthly rolling three-month-on-three-month employment growth grew a mere 3.0K, down on 42K in the previous month and well below consensus estimates for growth of 27K.

Yet, the number of unfilled vacancies rose to a record high of 833,000! So, employment growth appears to be slowing sharply yet there is a record amount of places available.

This suggests that much of the "slack" in the UK's labour market has now been absorbed and that employment growth may slow from here, while wage pressures accelerate.

In short, there are a lot of jobs on offer and not many people left in the labour force to fill them, businesses have to then increase the amounts they are willing to pay in order to secure talent.

"The labour market figures suggest that competition for workers is finally starting to provide greater support to wages," says Andrew Wishart, a UK economist at Capital Economics. "Despite today’s increase in wage growth, we still think that the MPC will hold off raising interest rates again until the near-term uncertainty due to the Brexit negotiations is resolved."

Currency markets care about the labour data because of the influence that changes in unemployment and wages can have on inflation, in that lower unemployment and faster wage growth means greater demand within an economy and higher inflation further down the line, which is important for questions around interest rates.

In short, today's data promises higher inflation in the future and higher interest rates which = a stronger Pound.

"Signs that employment growth is slowing should mean that the MPC does not feel compelled to dampen the recent upturn in wage growth by raising interest rates again soon," says Sameul Tombs, chief UK economist at Pantheon Macroeconomics. "Wage growth picked up in July partly because nearly all 1.3 million NHS workers finally received a pay rise of at least 3%."

Tombs says that wage growth will remain moribund in the private sector because the jobs market still has some "slack" and employees appear to be less willing than usual to move jobs.

The suggests that for Sterling a base to the broader April-August decline might start to be building: 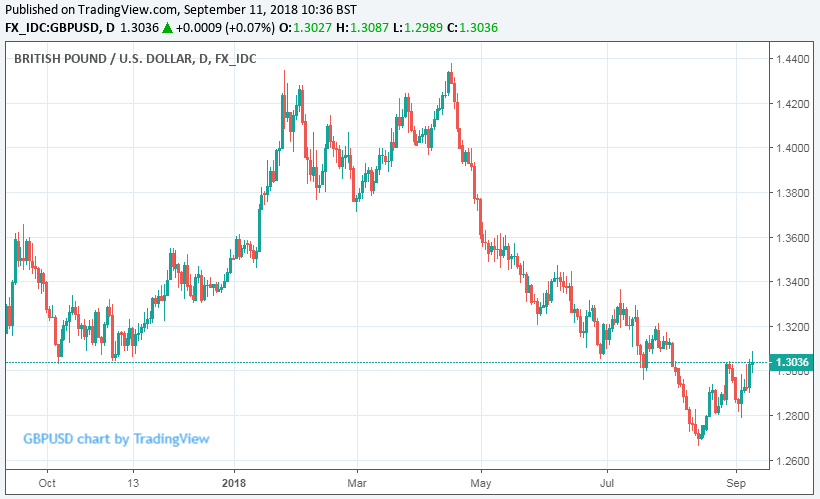 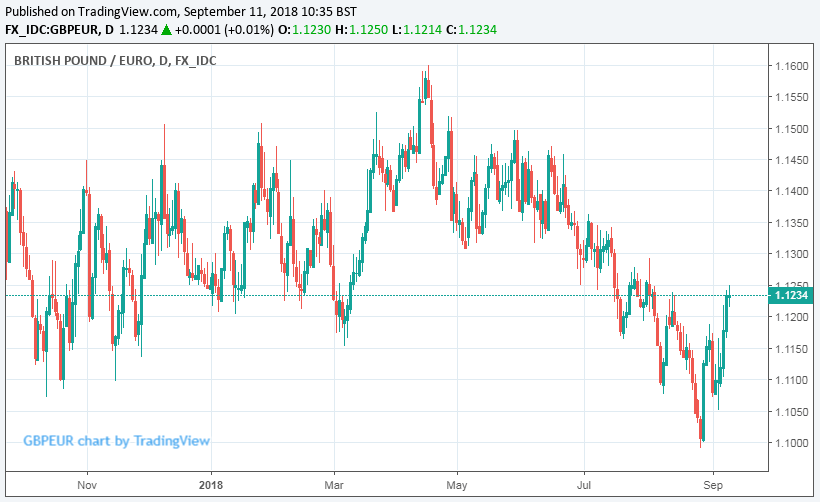 However, Crédit Agricole doubt that the labour data will trigger any change in BoE rhetoric ahead of Thursday’s monetary policy meeting.

"In addition, we still believe that for the pound to rebound in earnest, we would need a more sustainable abatement in Brexit risks. In all, today’s release may not have a sustained positive impact on GBP so long as Brexit uncertainty lingers, keeping any BoE policy normalisation rather gradual," cautions Marinov.

Brexit Progress is "What People Want to See"

Tuesday's price action follows closely behind GDP data released on Monday, which showed the UK economy growing at its fastest pace for nearly a year during the three months to the end of July.

However, it wasn't until Brussels' negotiator Michel Barnier gave further positive guidance on the progress of Brexit negotiations that Pound Sterling actually began to rise.

"Brexit progress is what people want to see, as sterling has rallied a few times in recent weeks thanks to seemingly favourable comments from Barnier regarding a Brexit deal. The recent rebound in the pound could gather pace off the back of this impressive wage growth and employment data as it may put pressure on the Bank of England to speed up its rate hiking cycle, but Brexit discussions will continue to dominate headlines,” says Felix Blom, a currency analyst at trading firm OFX.

The Bank of England raised its interest rate by 25 basis points to 0.75% during August, marking its second interest raterise inside of nine months, citing elevated inflation and a range of factors it expects to keep the consumer price index above the 2% target for much of the next couple of years. The BoE will announce its latest policy decision on Thursday.

However, with the Brexit negotiations now at a crucial stage and the UK's March 29, 2019 EU departure data fast approaching, expectations of another interest rate move by the BoE have been kicked out into the long grass. Most analysts say the negotiations must be concluded before the BoE will be willing to raise its interest rate again and that Brexit will be the primary driver of Pound Sterling during then months ahead.

"Recent progress in negotiations has increased confidence that a final Brexit agreement can be reached by October or November at the latest," says Lee Hardman, a currency analyst at MUFG. " The Pound has failed to reflect the stronger UK data flow and higher UK rates in recent months, which creates scope for catch-up strength if Brexit risks ease."

The so-called "backstop" proposals for trade arrangements should UK and EU officials fail to agree a solution to the Irish border problem remains the most contentious issue in the Brexit negotiations.

The current proposal would force the UK to choose between remaining inside the EU single market and customs union until a deal that is palatable to Brussels can be struck, or allowing the Northern Irish province to be annexed into the regulatory and legislative orbit of the EU.

Prime Minister Theresa May has said "no British Prime Minister" could allow Northern Ireland to be annexed, but remaining inside the customs union and single market would be political dynamite for members of the governing Conservative Party.

EU negotiator Michel Barnier said last week he is open to discuss alternative "backstop" proposals, encouraging optimism that a solution can be found. He then said on Monday that he is optimistic a deal can be reached within the next eight weeks.

The withdrawal negotiations need to be wrapped this year so the resulting deal can be approved by the European Council and ratified in all parliaments across the EU before March 29, 2019. If it is not, then the UK could leave the EU and default to trading with it on World Trade Organization terms.