The British Pound advanced against all rivals Monday as traders responded to official data showing economic growth picking up sharply during July, suggesting the economy gathered momentum at the beginning of the third-quarter.

UK GDP grew by 0.3% during July, up from 0.1% back in June, when markets had looked for growth of just 0.2%. This was enough to push the quarterly growth rate up from 0.4% to 0.6% for the three months to the end of July, which is its fastest pace since the quarter ending in August 2017.

The services and construction industries were the standout performers during period, accounting for much of the expansion, while the industrial sector weighed on growth according to the Office for National Statistics (ONS) figures.

"The more timely survey evidence suggests that the economy grew at about 0.4% in August, so the strength of GDP growth seen in July may prove to be fleeting. Indeed, the surveys suggest that while the contraction in manufacturing has now come to an end, the sector will continue to lag behind services. Nonetheless, todays GDP figures present a slight upside risk to our forecast that the economy will grow at 0.4% q/q in Q3," says Andrew Wishart, a UK economist at Capital Economics.

Services output rose by 0.6% during the three months to the end of July, supported by strong retail and wholesale trade, while output from the construction sector scored a record in July thanks to unseasonably high levels of house building activity.

However, and on the downside, industrial output fell during the recent quarter. This was because a strong July rebound in output from the mining and quarrying sector was not enough to offset the adverse impact of downtime for maintenance and other production stoppages seen during May and June.

The manufacturing industry also appeared sluggish in July, with output contracting by -0.2% when markets had looked for it to grow by 0.2%. However, the ONS says this was due to a 7.5% fall in the value of pharmaceuticals output, which masked an otherwise strong month for eight out of 13 subsectors. 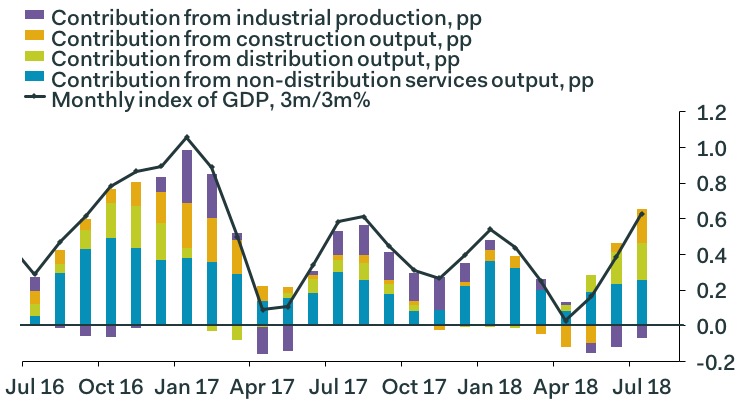 July's GDP number is likely to have been influenced for the better by the Fifa World Cup, a significant part of which took place during the first half of the month, with retailers and restaurants probably benefiting from a related boost in trade. However, PMI surveys covering subsequent weeks have already pointed to a slowdown in August, casting a cloud of uncertainty over the outlook for the quarter.

"The drop in the manufacturing PMI to its lowest level since the Brexit vote in August suggests that production likely will flatline over the coming months," says Samuel Tombs, chief UK economist at Pantheon Macroeconomics. "July’s data suggest that the risks to the MPC’s forecast for another 0.4% quarter-on-quarter rise in GDP growth in Q3 lie to the upside. But the fall in the confidence components of the Markit/CIPS and Lloyds surveys, the slowdown in global manufacturing, and the prospect of a further escalation of political tensions in the U.K. suggest that the economy is heading for a weak end to 2018."

Data Helps Sterling Building a Base

The data has helped underpin Sterling which is looking firmer on a flow of improved Brexit headlines over recent days and gives a sense that a base might be building: 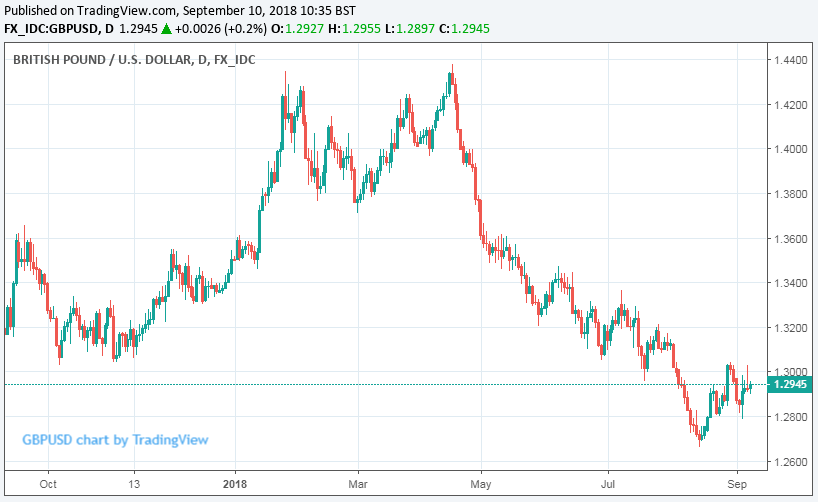 The Pound was quoted 0.22% higher at 1.2942 against the Dollar following the release Monday after extending an earlier 0.18% gain, while the Pound-to-Euro rate was up 0.07% at 1.1185. Sterling was also higher against all other developed world currencies on the morning. 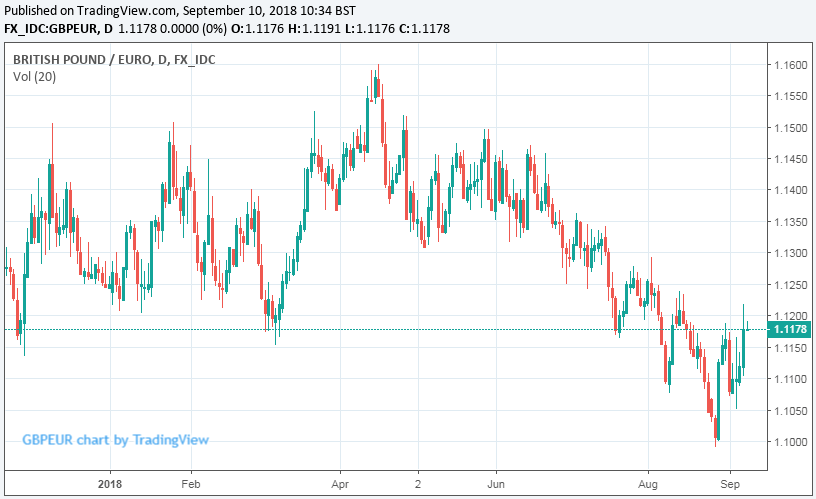 Currency markets care about the GDP data because it reflects rising and falling demand within the UK economy, which has a direct bearing on consumer price inflation which is itself important for questions around interest rates. And interest rates themselves are a raison d'être for most moves in exchange rates.

"These are great figures and suggest there is still life in the UK economy despite all the negative political headlines and the pressures faced by the household sector. However, the UK is still expected to be battling it out with Japan and Italy as to who is the worst performing developed market economy this year and next," says James Knightley, chief international economist at ING Group. "We think it highly unlikely that the Bank of England will raise rates before the UK leaves the EU on 29 March next year."

Bank of England, Brexit in Focus

The Bank of England raised its interest rate by 25 basis points to 0.75% during August, marking its second interest rate rise inside of nine months, citing elevated inflation and a range of factors it expects to keep the consumer price index above the 2% target for much of the next couple of years.

However, with the Brexit negotiations now at a crucial stage and the UK's March 29, 2019 EU departure data fast approaching, expectations of another interest rate move by the BoE have been kicked out into the long grass. Analysts say the negotiations must be concluded before the BoE will be willing to raise its interest rate again and that Brexit will be the primary driver of Pound Sterling during then months ahead.

"A report in the FT suggests that the EU is preparing to give their Chief Brexit negotiator Michel Barnier new instructions to help close a deal with Britain. It provides another indication that the EU and UK could be willing to allow more ambiguity over the outline for future trading relations, which could help to finalise the withdrawal agreement and avoid a more disorderly “No Deal” Brexit," says Lee Hardman, a currency analyst at MUFG. "We see scope for the pound to strengthen further as the current Brexit risk premium is pared back."

The so-called "backstop" proposals for trade arrangements should UK and EU officials fail to agree a solution to the Irish border problem remains the most contentious issue in the Brexit negotiations.

The current proposal would force the UK to choose between remaining inside the EU single market and customs union until a deal that is palatable to Brussels can be struck, or allowing the Northern Irish province to be annexed into the regulatory and legislative orbit of the EU.

Prime Minister Theresa May has said "no British Prime Minister" could allow Northern Ireland to be annexed, but remaining inside the customs union and single market would be political dynamite for members of the governing Conservative Party.

EU negotiator Michel Barnier said last week he is open to discuss alternative "backstop" proposals, encouraging optimism that a solution can be found. The withdrawal negotiations need to be wrapped this year so the resulting deal can be approved by the European Council and ratified in all parliaments across the EU before March 29, 2019. If it is not, then the UK could leave the EU and default to trading with it on World Trade Organization terms.