Pound Sterling has endured a poor start to the month, running lower against the US Dollar and Euro despite the Bank of England raising its basic rate to 0.75% on August 02.

Sterling looks quite keen intent on breaking below the 2018 low at 1.2958 against the Dollar at some point in the near future while against the Euro we see Sterling caught in a downtrend that has been in place since mid-April when it peaked just below 1.16.

The trend lower leaves the exchange rate looking heavy and, from a technical perspective, we are eyeing a test of the 2018 low at 1.1164 in the near future.

This is a significant observation as orthodox financial theory suggests that when a central bank is in the early stages of an interest rate raising regime its currency should be heading higher.

Yet, Sterling is heading in the opposite direction, creating a huge gap between fundamental value and actual value. In short, this is a heavily undervalued currency when the fundamental shape of the UK economy and interest rates are considered. 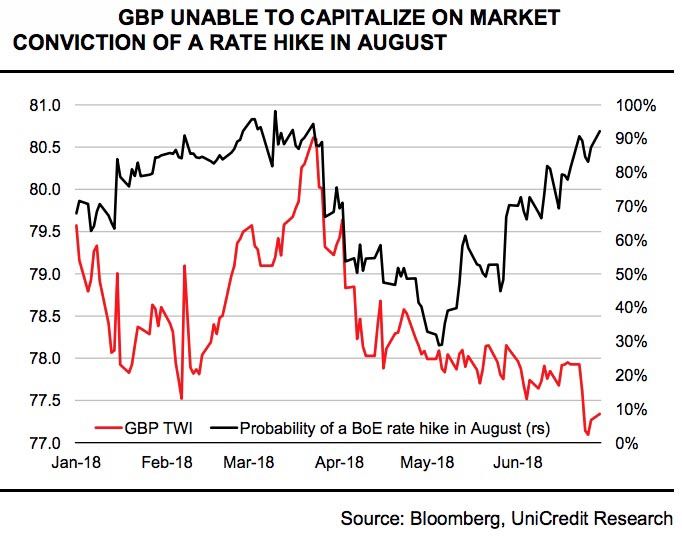 This graphic from analysts at UniCredit Bank tells us that the Pound is simply not responding to expectations for higher UK interest rates as it once did. Therefore, the argument that the Pound will largely ignore economic data releases at this stage of the year is a sound one.

Sterling can be considered to be cheap on this basis and at some point in the future a large recovery must ultimately take place to ensure Sterling reflects the value of the underlying economy.

However, with Brexit uncertainties looming large in what promises to be a very important few months for negotiations, traders are intent on ignoring the fundamentals.

"Given the delicate political situation, which will carry more weight as the year goes on, we think the Pound will now face some headwinds. When rates rose last November the Pound fell, because of the suggestion that rates will only rise very gradually," says Guy Foster, Head of Research at Brewin Dolphin. "Overall, this rate rise is not a game-changer."

Of course it is Brexit risk sentiment that is demanding Sterling be priced at a premium, and until this gremlin can be shaken the currency will likely struggle.

The bad news for Sterling bulls though is that we are still many weeks away from getting the clarity the markets desire with the October European summit seen as being the key event on the horizon as it is here that European leaders will agree on whether or not to OK a Brexit deal with the UK.

While there is little on the immediate horizon to suggest Sterling can recover, there is the conciliatory observation that there are not many downside triggers on the agenda for the foreseeable future.

With UK and European politicians on holiday we would expect Brexit-orientated headlines to be rather thin for the duration of August which could leave Sterling markets rather listless.

Consolidation could therefore be the keyword of the month.

Sterling's initial rally following the Bank of England interest rate rise saw it hit 1.3125 on GBP/USD and 0.8855 on EUR/GBP but ultimately the currency found little support and then turned sharply lower.

"The currency came under significant pressure as the market instead preoccupied itself with Carney’s comments that gradual rate rises will be more of a ‘walk’ than a ‘run’ and possibly highlighted its still sensitive stance towards political risks," says Robin Wilkin with Lloyds Bank. 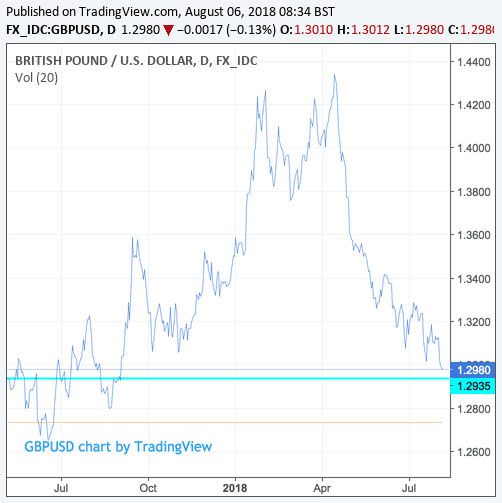 With regards to the Pound-to-Euro exchange rate's outlook, Wilkin sees further range trading, between 1.13 and 1.1180. 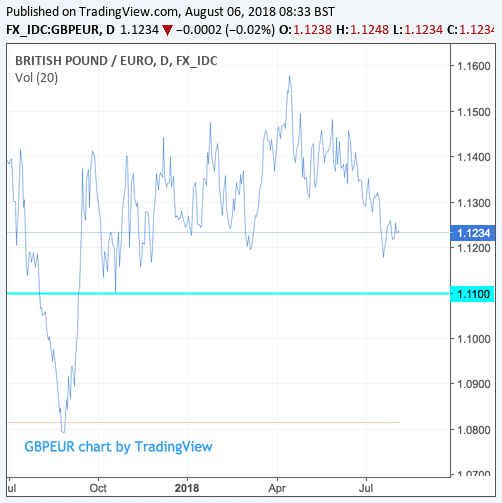 While Sterling-Dollar finds itself at the mercy of the broader Dollar rally, Sterling-Euro has shown itself to be particularly responsive to sentiment regarding Brexit and therefore if the Pound does stay within the range, we would expect it to bounce along the bottom (in the 1.11 region referenced by Wilkin).