- Sterling jumps, then reverses in line with analyst warnings that any gains might be limited 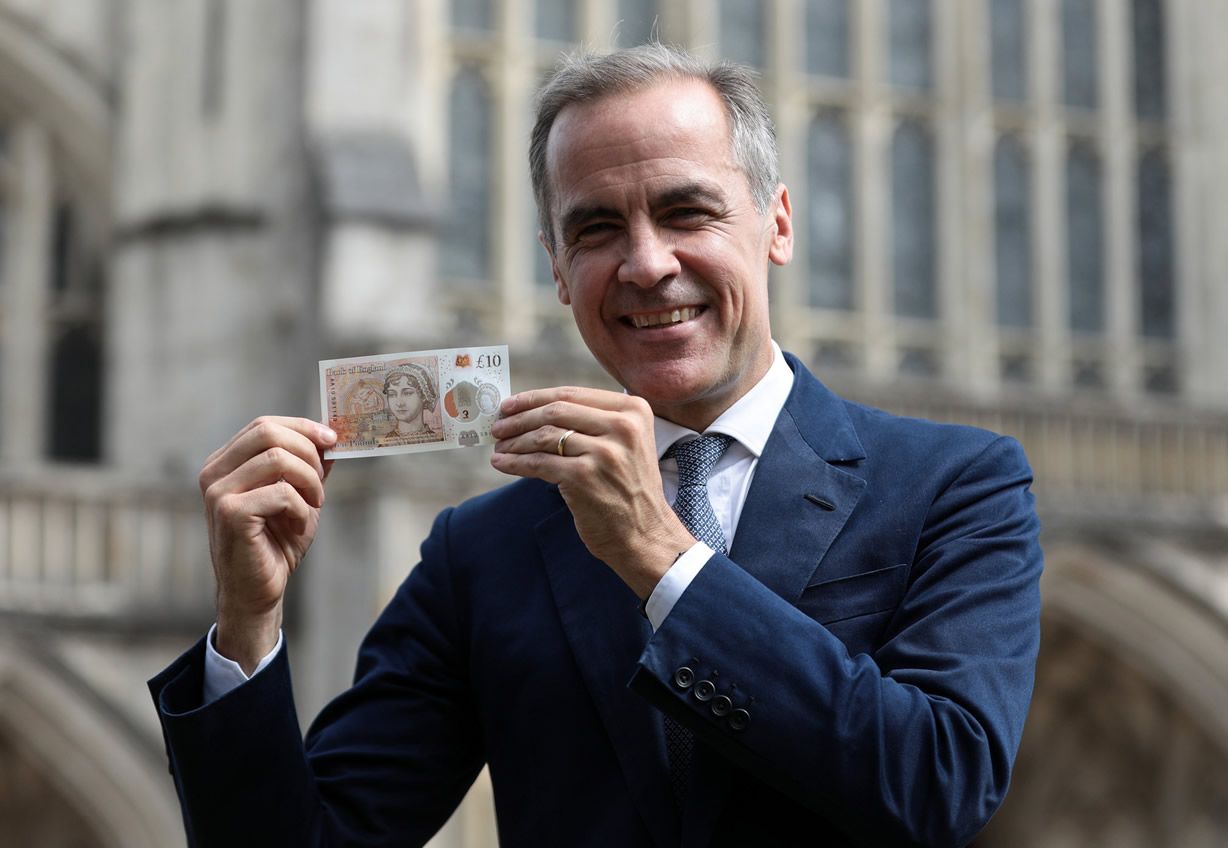 The Bank of England has surprised foreign exchange markets by voting 9-0 to raise interest rates to 0.75% on Thursday, August 02.

The interest rate rise itself is not a surprise, rather it is a 9-0 decision to do so that has caught markets by surprise. Sterling initially moved higher as a result before an inevitable 'sell the fact' was adopted by currency markets ensuring the currency is now actually lower than where it was going into the meeting.

Industry pundits consider this to be a 'hawkish' hike as it suggests the Bank's Monetary Policy Committee will be inclined to vote for further interest rate rises over coming months.

"The Committee also judges that, were the economy to continue to develop broadly in line with its Inflation Report projections, an ongoing tightening of monetary policy over the forecast period would be appropriate to return inflation sustainably to the 2% target at a conventional horizon," reads a statement issued by the Monetary Policy Committee.

Indeed, we reported earlier that analysts at TD Securities saw only a 15% chance of such an outcome, they forecast the Pound-to-Euro exchange rate to potentially rise to 1.14 on the move, the Pound-Dollar exchange rate is meanwhile tipped to go above 1.33.

This initial reaction appears to have vindicated this forecast, but the subsequent selling pressure will certainly have burnt some hands.

The Pound-to-Euro exchange rate was quoted at a daily best at 1.1291 in the initial kick higher, but is back down to 1.1236 at the time of writing. 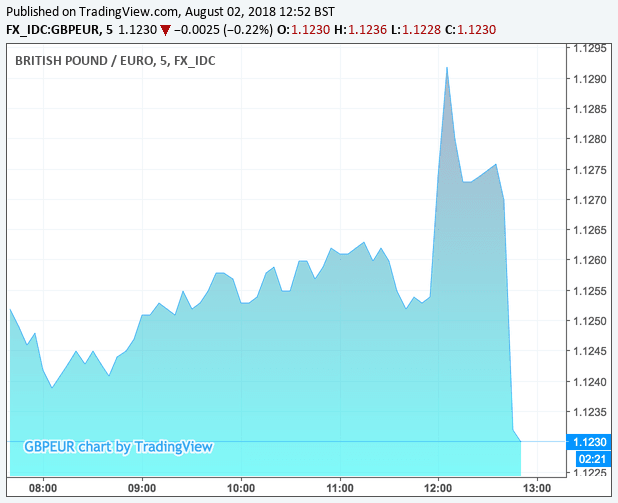 The volatility was impressive with exchange rate suffering its 6th biggest 2018 one-hour range (101 pips) which is the largest since May 10; GBP/USD fell by the most in one-hour since July 9, closing down 50 pips.

Putting our thumb on any direct cause for the reversal in Sterling is proving rather difficult.

"For me GBP is moving lower as Carney showing some sympathy towards a possible 'hard' Brexit, they are preparing for it as we know. The "Walk not run" comment looked to coincide with a further solid move lower for GBP," says Neil Jones at Mizuho Bank Ltd.

In press comments (which can be watched above) Governor Mark Carney said "monetary policy needs to walk, not run, to stand still as equilibrium interest rate rises gradually."

It could be that this is suggestive that interest rate rises are not going to rise any faster than already expected.

However we are sceptical on this, indeed studies of the underlying futures markets suggest this one phrase has done little to dent expectations.

"Some trying to explain GBP slide by slower BOE tightening path. I am not buying it. The implied yield of Dec 2019 short-sterling futures contract has eased a single basis point to 1.23%," says Marc Chandler, a Wall Street veteran and prominent financial markets commentator.

There are two realistic explanations as to why the Pound failed to rally:

"With the Bank’s rhetoric and key judgments left virtually unchanged from the May inflation report, there was de facto little news from the August MPC," says Fabrice Montagne, an economist with Barclays.

With little real new information being made available, currency markets might be justified in feeling a little deflated.

Another bullish driver for Sterling is the upgrade to forecasts for inflation and growth contained in the Inflation Report. 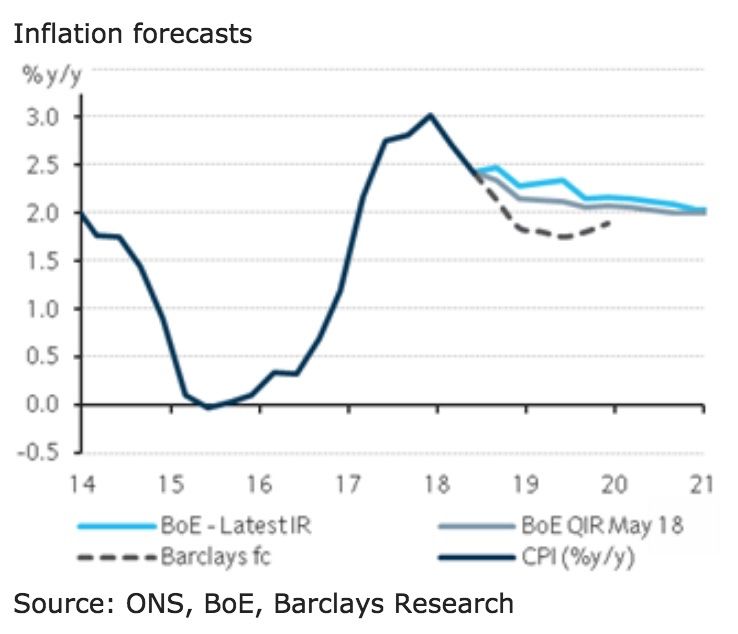 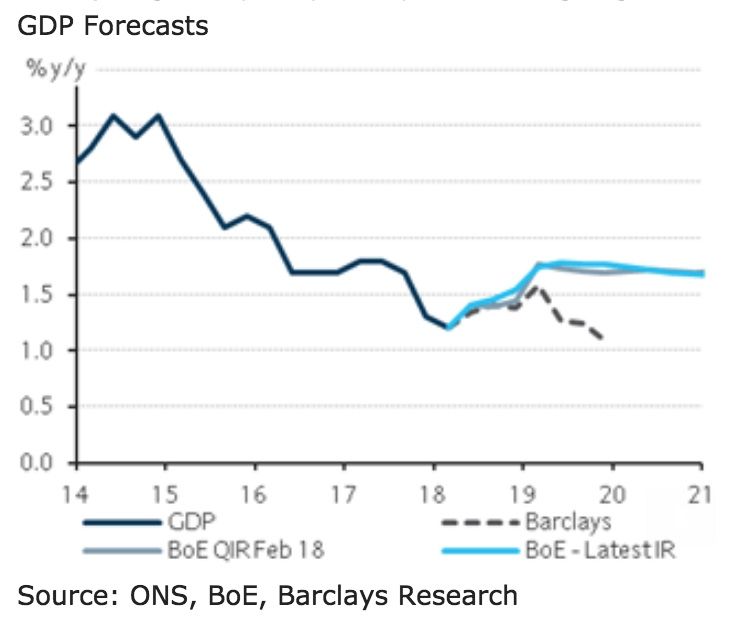 The decision to raise interest rates means the UK's basic interest rate is finally raised off the floor that was put in place in the wake of the global financial crash and ensuing recession.

"This is hopefully the first step on the road to a more normal level of interest rates - following the lead from the US Federal Reserve. The UK economy is now in the tenth year of economic recovery and the unemployment rate is at its lowest level for over 40 years. So there is no obvious reason for delaying the gradual rise in interest rates which the MPC has been talking about for some time," says Andrew Sentance, senior economic adviser at PwC.

Sentance, a long-time critic of the Bank's ultra-low interest rate policy, adds businesses and consumers should be able to adapt to a well-communicated and gradual series of interest rate rises, after nearly a decade of exceptionally low borrowing costs.

"Higher interest rates should also provide some much-needed relief to savers who have seen their investment returns eroded significantly since the financial crisis," says Sentance.

Analyst Reactions and Forecasts for the Pound

The majority of foreign exchange analysts maintain a cautious approach to Sterling, with many warning that any gains coming from the August rate rise will likely prove short-lived.

"No game-changer for our GBP view. Brexit the bigger driver for GBP in the near-term. But if we get a Withdrawal Deal then expect to see a pretty sharp relief rally in GBP (via the channel of BoE policy re-pricing). GBPUSD 1.40 not a foregone conclusion in 2018," says ING's Patel.

Andreas Steno Larsen with Nordea Markets recommended selling Sterling going into the meeting, having expected the currency to take a hit as the Bank opts to keep interest rates unchanged.

"Admittedly, we were slightly off on the voting composition of Bank of England. But even with a 9-0 hike, EUR/GBP is now already higher than before the meeting. So we definitely had the short GBP bias spot on!" says Larsen.

Nordea Markets point out the hike was broadly priced in forehand and with a dovish wrapping the GBP reaction is muted.

"It doesn't bode well for the GBP that even a unanimous hike cannot really get the momentum in Sterling going. Once inflation disappoints even more (than what we have already seen), prospects of hikes will no longer be able to counter Brexit-risks. We would like to see EUR/GBP above 0.90 again, before considering a positive stance on GBP," says Larsen.

Kallum Pickering, Senior Economist with Berenberg Bank, agrees that the avoidance of chaotic Brexit will pave the way for a steeper path of interest rate rises.

"We look for the BoE to keep rates on hold now until the Brexit outlook becomes clearer. Further out, however, we expect the BoE to step up the pace of its policy normalisation," says Pickering. "The BoE has signalled in the past that a conventional horizon is typically two years not three. We therefore continue to expect the BoE to hike by more than the market had priced in before the August Inflation Report today."

Pantheon Macroeconomics think markets are right to anticipate that the MPC will wait until May 2019 to raise Bank Rate again.

"Brexit risk will stymie the economy, underlying inflation is weak and the housing market cannot handle a faster pace of tightening. But we expect the economy to regain some momentum next year following a soft Brexit outcome, enabling the MPC to raise Bank Rate twice in both 2019 and 2020, exceeding the glacial pace of tightening currently priced-in by markets," says Samuel Tombs, Chief UK Economist with Pantheon Macroeconomics.

What is of no doubt to us, and clearly the markets, is that for Sterling it is all about Brexit going forward. Expect the currency to become prone to overall investor sentiment relating to progress in the ongoing negotiations.

"With rates now out of the way as a market talking point for the next few months, focus is likely to return to the ever-changing nature of Brexit. We suspect sterling will likely become even more correlated to headline risk,” says Timothy Graf, head of macro strategy EMEA at State Street Global Markets.

It's back to headline watching then.

"Given the delicate political situation, which will carry more weight as the year goes on, we think the Pound will now face some headwinds. When rates rose last November the Pound fell, because of the suggestion that rates will only rise very gradually," says Guy Foster, Head of Research at Brewin Dolphin. "Overall, this rate rise is not a game-changer.