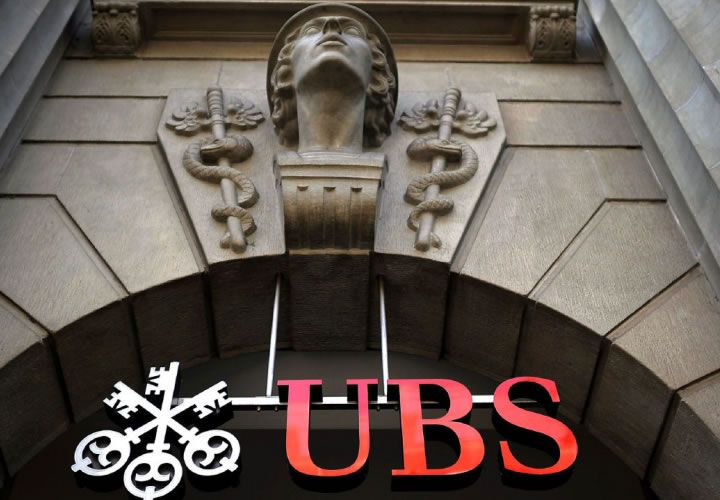 Switzerland's largest bank UBS Group AG are maintaining one of the more bearish stances on the British Pound for 2018.

A fresh set of forecasts and analysis released by the Zurich-based institution shows that the Pound is expected to fall to within 5 cents of  parity with the Euro, but the UK unit should fare better against the Dollar and maintain ground above $1.30.

The "external position" referred to in the above is the country's balance of payments - the country's bank balance with the rest of the world based on trade and investment income. But, UBS single out the Pound and New Zealand Dollar as being the two G10 currencies most at risk of negative pressures stemming from politics.

And despite Sterling's deep falls since the June 2016 EU referendum, analysts believe the currency to be overvalued, an observation that is intriguing considering a number of other major institutions consider the Pound to now be cheap. 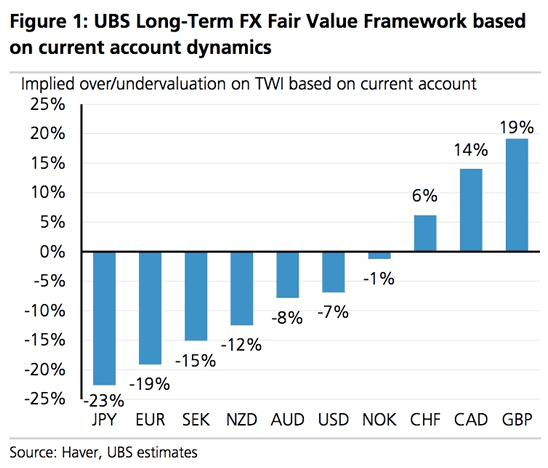 "Brexit and the UK's external imbalances have been central to our negative view on sterling for a while. Our FEER model screens sterling as c. 20% over-valued in TWI terms even after the substantial drop since the Brexit referendum, as the UK current account has yet to correct to more sustainable levels," says Kontopoulos.

The current account essentially reflects the state of the UK's bank balance with the rest of the world - the UK imports more than it exports leaving the balance in deficit.

This should mean a lower currency as global demand for Sterling is outstripped by the UK's demand for other currencies in order to fund imports.

But, the UK does attract currency inflows via other routes, the main being inward investment. The worry is that inward investment might dry up over uncertainty stemming from Brexit, in which case the Pound would be exposed to its negative current account and fall lower.

According to the University of Warwick, compared to other G7 countries, the UK has the highest percentage of inward Foreign Direct Investment as a proportion to GDP, at 64% cent of GDP.

Firms that have come to the UK to sell into the single market from outside, such as Japanese car-makers, seek uncomplicated tariff-free trade with the EU.

Investors operating supply chains that cross between the UK and the EU will face challenges if the UK leaves the customs union. The depreciation in the pound has attracted inward investment in the short term from investment vehicles looking to acquire cheap assets, but recent data suggest this is being choked off.

The UK also earns foreign currency from external investments, but recent data from the ONS suggests this amount is smaller than previously thought.

"A substantial revisions in the income account included in the Q2 Balance of Payments release imply a larger gap to more sustainable current account levels than previously estimated," warns Kontopoulos.

But a Stronger Eurozone Economy Could Support the Pound

There are some interesting observations made by UBS concerning the Pound's relationship with the Eurozone economy where it is argued that a strengthening Eurozone is actually good for the Pound.

Why? The reason is because UK investors hold a good deal of investments in Europe, it stands that should Europe do well, so do UK investors.

They would inevitably have to repatriate returns on European investments, in doing so this drives up the value of the Pound.

"In a benign environment for risky assets, improvements in the current account via the income account are likely to persist, thereby reducing the UK's external imbalance. The continuation of the Eurozone's solid  recovery in particular could benefit sterling both via the income account (as Europe is the largest destination for UK's FDI) as well as the trade balance," says Kontopoulos. 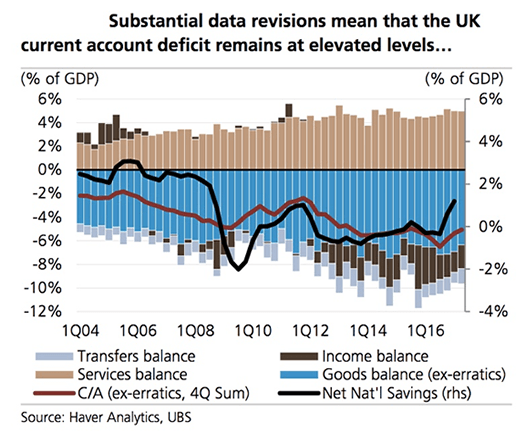 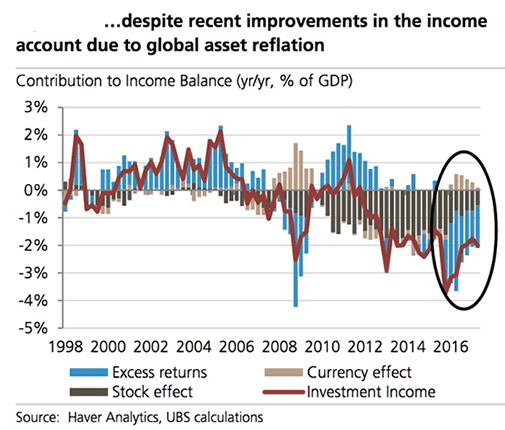 The Bank of England Unsupportive

The other key driver of Sterling value - the Bank of England - is expected to be relatively unsupportive of a stronger Pound in 2018 according to UBS.

While markets currently see at least two more interest rates within the next two years - which would take the UK's base rate up to 1.0% - UBS reckon such an hiking cycle to be unlikely.

UBS believe that UK consumers are likely to remain under pressure over coming months as inflation outstrips pay increases while the Bank of England's expectations for increased business investment over the same period proves disappointing.

UBS recently advised they no longer see another interest rate rise occurring in 2018. "Overall, the BoE is unlikely to come to sterling's  rescue any time soon, in our view," says Kontopoulos.

Forecasts for the Pound vs. Euro and US Dollar

The analysis and assumptions made by UBS result in the following foreign exchange forecasts.
UBS forecast the EUR/GBP exchange rate to fall to 0.95 by the time 2018 is finished, this gives a Pound-to-Euro exchange rate of 1.05.

The Pound-to-Dollar exchange rate is forecast to fall to 1.32.