Capital Economics argue that the depreciation of the pound is an important reason why the economic effects of a vote to leave the EU might be smaller than the gloomier pre-referendum predictions suggested.

The Pound Sterling has seen unprecedented selling pressure since the UK voted to leave the European Union on June 23rd.

Uncertainty over what the future holds for the UK economy has been expressed primarily through the currency - a highly liquid and responsive market place.

Here is how the GBP has performed when we compare current conversions with levels seen ahead of the Brexit vote result being announced on the 23rd June:

The trade-weighted index - the broader measure of the overall Sterling complex - has dropped by over 10%.

But, should we be alarmed by these falls?

Not so, say analysts at Capital Economics, who have typically struck a more constructive tone on Brexit than many of their peers in the investment community.

“While the downward pressure on the pound has increased in response to some adverse post-referendum developments, we have long argued that a substantially lower exchange rate would be an important factor helping to limit the economic damage of a vote to leave the European Union,” says Jonathan Loynes at Capital Economics.

Loynes opines that the Pound’s weakness has been widely presented as a negative development.

This is certainly a perception propagated by the media.

We ourselves are guilty of presenting a stronger currency as a better outcome, the repetitive use of the words ‘stronger’ and ‘weaker’ when describing currency moves confirm an inherently bias.

The message from Loynes is that we should not panic about the Pound, "as the single biggest factor behind the Pound’s fall has been a substantial shift in expectations for UK interest rates,” says Loynes. 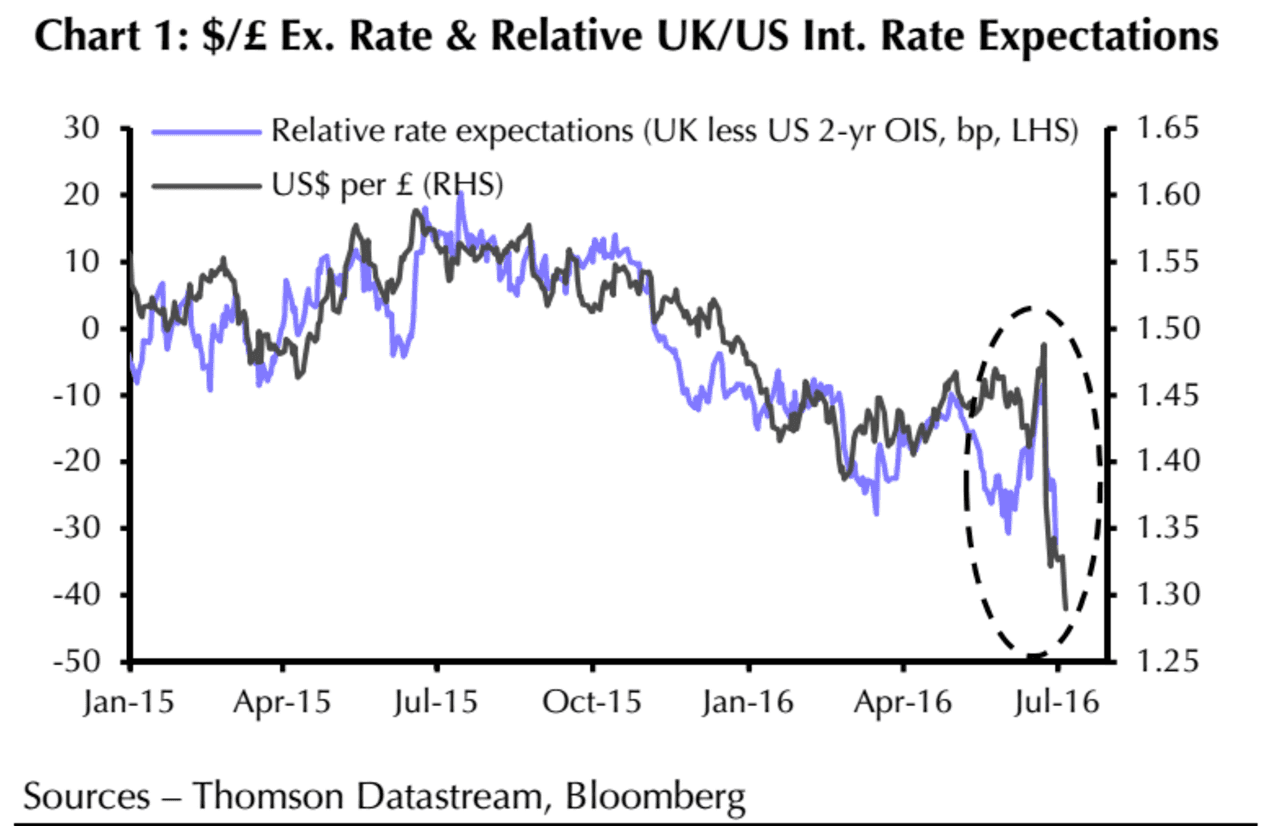 As can be seen above, Brexit has brought with it expectations for the Bank of England to cut interest rates, starting in July.

By the end of the year the UK’s basic rate could sit at 0%.

All the while, the US maintains its stronger yield advantage. Hence, the yield is moving in favour of the US, which drags down sterling.

As can be seen, the GBP/USD tracks the differential almost religiously.

The Governor of the Bank of England has himself said that he and the Monetary Policy Committee are quite happy with the pound’s current level and would not be averse to a further depreciation.

“We have long cited a likely depreciation of the pound as an important reason why the economic effects of a vote to leave the EU might be smaller than the gloomier pre-referendum predictions suggested,” says Loynes.

The trade-weighted index is merely back at the levels seen for around five years after the 2008 financial crisis: 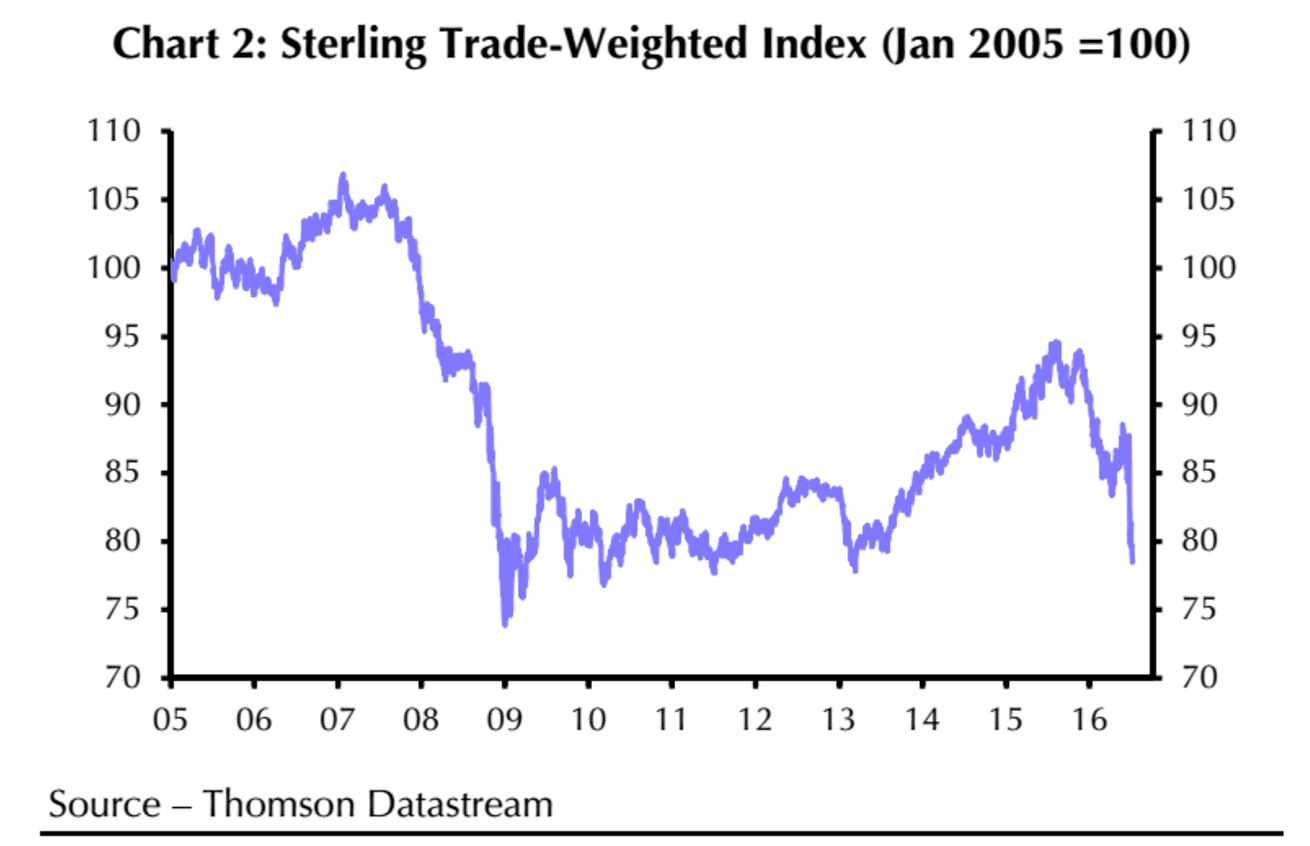 Capital Economics note that during the time of the last recession, the depreciation was widely perceived as an important factor helping to cushion the UK from the global turmoil.

Why? When the pound falls, UK produce becomes cheaper - we have just seen all things British come down by 10% on the global stage. This should stimulate demand.

“In that sense, it might be argued the pound’s latest decline has been a Goldilocks depreciation – not too big and not too small,” says Loynes.

The recent sharp fall in the Pound improves exporters’ competitiveness and, as long as they don’t use all of the fall to boost margins, they should see improved demand.

Capital Economics concede that there are some reasons to think that the pound will fall further, including prospective US monetary tightening and concerns over the UK’s current account.

“But provided that occurs in a relatively orderly manner, and that the MPC is prepared to look through the inflationary consequences as it did after 2008, it should not be anything to fear,” says Loynes.

Thus, keeping the pound down at a competitive level which will help to cushion the impact of Brexit, re-balance the economy and revive productivity growth could turn out to be the policymakers’ biggest challenge over the coming years.

All eyes now turn to the Bank of England's first post-Brexit vote policy meeting due next week.

One rate cut is therefore fully built into current GBP exchange rates. The big debate is therefore whether we will see two cuts or just one in 2017. Expect the Pound to move lower were a second cut start to gain better odds.

The Pound is likely to stabilise in the near-term and will require a catalyst to prompt the next leg lower.

BNP Paribas have their eyes on that all-important Bank of England meeting next week.

"In our view the market is still likely under-pricing BoE easing, with our economists forecasting a 25bp rate cut next week followed by a 25bp cut at the August meeting and GBP 100bn worth of Quantitative Easing (including corporate bonds) to be announced by the November meeting," say BNP Paribas.

Furthermore, "lower rates and reduced incoming foreign investor flows should leave the GBP vulnerable for some time to come."

Goldman Sachs' Robin Brooks agrees with the view that the market is not discounting Quantitative Easing, the persistence of easier monetary conditions in the UK, and the US-UK monetary policy divergence that they expect nearly as much as it should.

"Next week, we expect the BoE to provide a further indication of the scope of the conventional and unconventional monetary policy measures we expect. This will be the catalyst for a further downward move in Sterling," says Brooks.

Betway have meanwhile revealed the likelihood of sterling falling below 1.20 in 2016 enjoy odds of 6/4.

That is an implied probability of 40%.

"Betway quote 6/4 for the UK’s currency to tumble further and sink between $1.1-1.19 by the end of the year," says a briefing from the company.

However, it’s only 33/1 for the greenback to be stronger than the pound at any point this year, that is an implied probability of 3%.

Betway’s Alan Alger, said: “The UK economy has been on a rollercoaster ride since the UK voted to leave the EU and the Brexit fallout is hitting the pound hard at the moment.

“There will be plenty of uncertainty until the nature of the UK’s relationship with Europe is known, but the way sterling is moving at the moment the dollar overtaking the pound isn’t entirely out of the question at 33/1.”

Deutsche Bank reiterate their forecasts for a notably lower Pound Sterling against the Euro and Dollar, analyst George Saravelos gives his three reasons:

1) A starting point is purchasing power parity, which measures the exchange rate that equates the price of a “big mac” between two countries.

Our assumption is that the UK is undergoing an unparalleled negative “terms of trade” shock, which requires GBP to reach historical (under)valuation extremes.

2) An alternative metric is the fundamental effective exchange rate.

This measures the exchange rate that is required to bring a country’s current account deficit back in “equilibrium”, which here we define as the 20-year historical average, or in absolute annual terms about -40bn GBP, or 2.5% of GDP.

3) A final metric is to look at the underlying value of assets. What is the level of the exchange rate that would make UK assets “cheap” again and thus keep attracting the capital inflows that are needed to finance the current account deficit?

Here Deutsche Bank look at the London housing market priced in both dollars and euros as a proxy for “international UK assets” and assume “cheap” would be a return of house prices back to the currency-adjusted levels seen in 2005.

The conclusion from all three frameworks is that GBP has much more to go. Indeed, Deutsche Bank say their aggressive forecasts may still be under-stating the level of weakness required.

The bank's forecasts for GBP/USD and EUR/GBP are at 1.15 and 90 pence by the end of this year respectively.