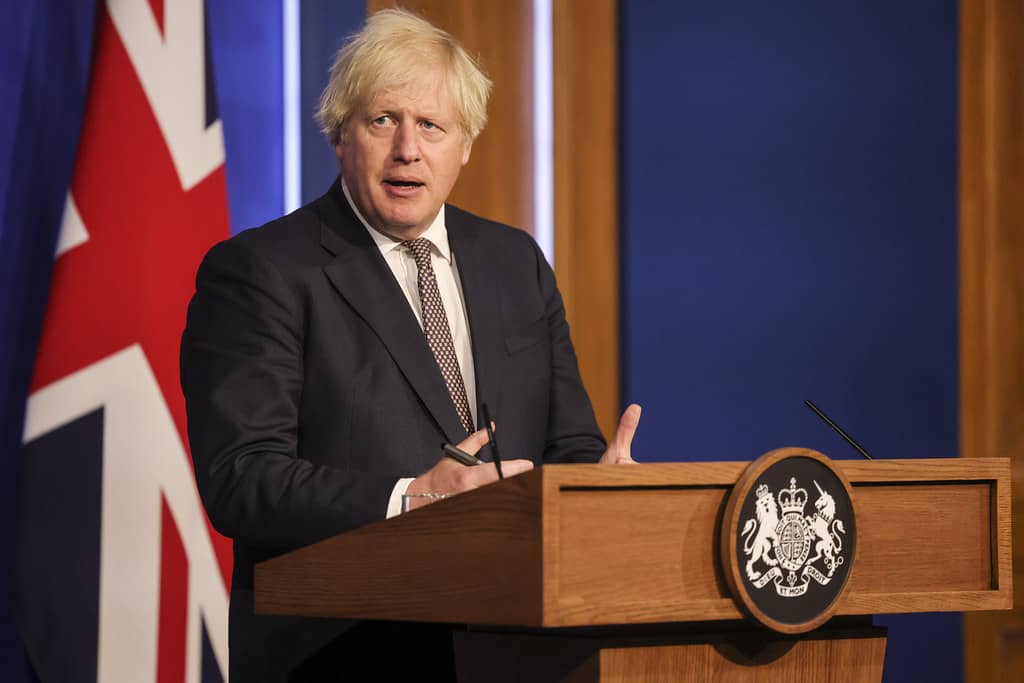 For the Pound the question is to what extent does the UK government respond to rising cases. Picture by Andrew Parsons / No 10 Downing Street

The Omicron variant of Covid-19 is set to become the dominant strain of the virus in the UK within weeks, but an advanced vaccine booster programme could mean the imposition of additional economy-squeezing restrictions will be avoided.

In fact, an analyst at Deutsche Bank says the UK's booster programme leaves the UK as one of "the best protected places in the developed world against Omicron," and the Pound could benefit as a result.

"For sterling ... the UK is likely to be the amongst the best protected places in the developed world against Omicron," says Shreyas Gopal, Strategist at Deutsche Bank in London.

The government continues to maintain a position that accelerating the booster programme will offer the country the best route through any Omicron-lead spike.

Prime Minister Boris Johnson told cabinet on Tuesday that there were no imminent plans for domestic restrictions which should allow the economy's recovery to advance.

Analysis of data from the UK Health Security Agency showed a rapid increase in the proportion of PCR tests showing a key genetic marker of Omicron.

Professor Alastair Grant of the University of East Anglia, who has access to the confidential data, said there were probably more than a thousand infections each day by now.

An acceleration in case numbers is now highly likely given the significant transmissibility advantage Omicron has over previous iterations of the virus.

A key question for financial markets - and the Pound - over the coming week will be to what extent vaccines protect against both infection and serious disease and Pfizer could offer some early research findings before the weekend.

There is much talk about the disease caused by the variant as being less severe than that caused by Delta, but as always what counts for financial assets is the response by governments.

For the Pound the question is to what extent does the UK government respond to rising cases? Political optics will certainly play a leading role in Boris Johnson's actions over coming weeks and the government's initial assessments to incoming data regarding vaccine effectiveness will give early clues.

"Uncertainty abounds around the virulence of the Omicron variant, its ability to evade the current crop of vaccines, and its near term implications for central banks," says Gopal.

Global markets have fallen during December as investors grapple with the implications posed by the new variant and the Pound has lost ground to the Dollar and Euro in a typical reaction to the deterioration in sentiment.

"While high booster rates mean that our base case is that the UK is not amongst the worst hit by Omicron, the currency's sensitivity to stocks has returned as expected amid the global turbulence," says Gopal. 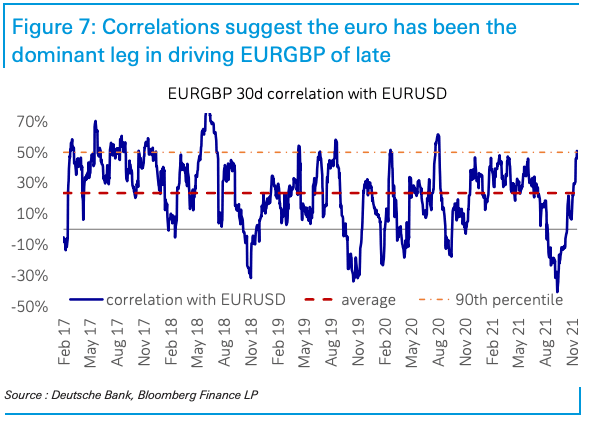 Above: The Pound has fallen against the Euro, which was one of the major beneficiaries from a global flight to safety. Image courtesy of Deutsche Bank.

"The pound is largely at the mercy of external factors in the short term," says Gopal. "Correlations show how the euro has been the dominant leg of EURGBP over recent
days, partly driven by a reduction in short positioning in the common currency"

When the market's Omicron sell-off subsides the selloff in Sterling would therefore likely subside.

The Bank of England is meanwhile due to consider raising interest rates on December 16 but Michael Saunders - a member of the Bank's Monetary Policy Committee - said last week the emergence of Omicron will be taken into account.

Analysts suggest this is a sign the once 'hawkish' Saunders is considering holding back on voting for a rate hike in December, saying his view explained some of the Pound's recent weakness. 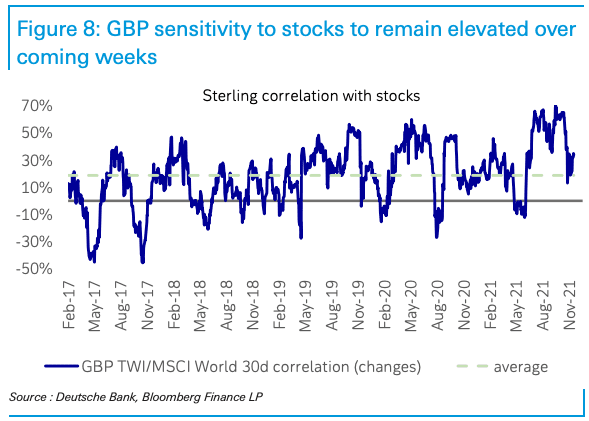 Above: The Pound is proving highly sensitive to investor sentiment. Image courtesy of Deutsche Bank.

Deutsche Bank says Sterling could find support if the country's advantage from relative booster saturation is taken into consideration by currency investors.

Such outperformance would be reminiscent of early 2021 when the Pound outperformed all its peers as the UK lead major economies in rolling out Covid vaccines.

Prime Minister Boris Johnson said on Monday over 20 million people across the UK have come forward and got their booster jab, that's 35% of the population aged 12 and above. 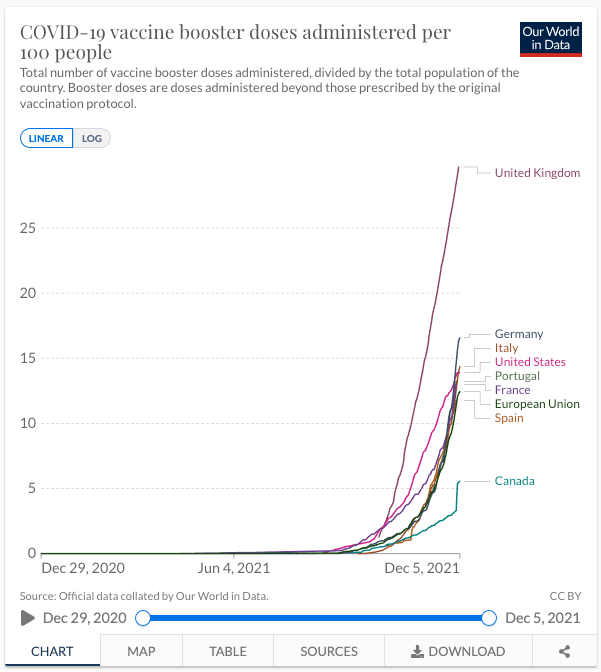 The Omicron virus has a substantially greater number of mutations when compared to its predecessors which allows it to spread more easily.

But the main concern for health professionals is that these mutations means it escapes the protection from vaccines.

However, the UK's Joint Committee on Vaccination and Immunisation's working assumption is that high levels of antibodies - as provided by vaccines - still allows some degree of protection from severe disease.

"On a cross country basis, the UK is well ahead of G10 peers in delivering a booster dose, which is more important than the fact the slow approval and rollout to teenagers in the summer means that other countries have actually given two doses to a higher fraction of the overall population," says Gopal.

Deutsche Bank says the variant is starting to spread and they will be paying attention to cases in London and the South East.

Professor Paul Hunter, an expert in infectious diseases from the University of East Anglia, says the Omicron variant could start "outcompeting" the dominant Delta strain within weeks.

In an interview with BBC News he said Omicron is "spreading rather more quickly than the Delta variant".

"How it's likely to spread in UK is still uncertain, but I think the early signs are it will probably spread quite quickly and probably start outcompeting Delta, and become the dominant variant probably within the next weeks or a month or so at least," said Hunter.

Last week the UK said it would expand the vaccination programme to all over 18s and the gap between second doses and boosters halved from six months to three.

Independent risk strategist James Ward says he's still worried despite the encouraging signs from South Africa which suggest Omicron is milder than those that came before.

"The reason for this is essentially our old favourite: multiplying a very large number by a small percentage can still give you a pretty large number," he says.

There is a widespread view that Omicron won’t be a big problem because severe disease protection will hold up well and the vast majority of reinfections and breakthroughs will be mild.

"But I’ve run a few numbers, and even with that assumption of maintained severe disease protection, a wave of hospitalisations with a peak similar to wave 2 (in Jan 2021) is quite possible," he adds.

He does caution that modelling the current variant remains highly uncertain and a wide margin of error must be applied on all forecasting at this point.