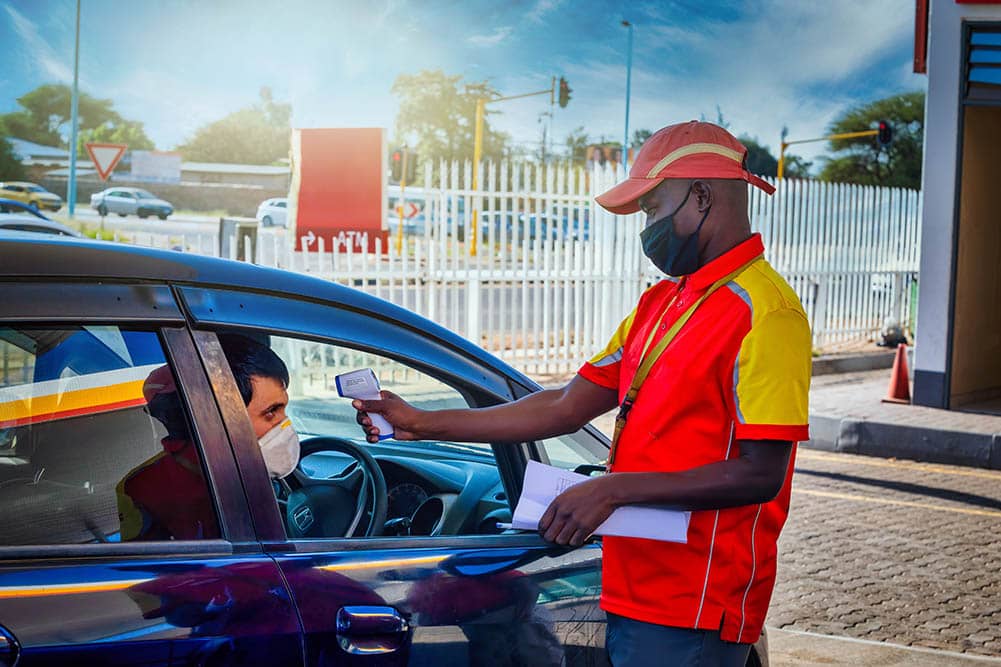 The British Pound is fragile and downside risks are elevated as investors await further developments on the Omicron variant, although the UK's advanced booster coverage could yet offer support.

The latest data out of South Africa serves as a warning that coming days will be particularly volatile for markets: the country is seeing an increase in Covid-19 reinfections thanks to Omicron in a way it did not experience with previous variants.

This is according to a microbiologist from the country’s National Institute for Communicable Diseases (NICD).

“Previous infection used to protect against Delta but now with Omicron that doesn’t seem to be the case,” said Professor Anne von Gottberg in an online briefing organised by the World Health Organization.

Data published by the NICD on December 02 revealed a three-fold increase in risk for reinfection due to Omicron, compared to previous variants.

"This finding provides epidemiological evidence of Omicron's ability to evade immunity from prior infection," said a statement.

"Contrary to our expectations and experience with the previous variants, we are now experiencing an increase in the risk of reinfection that exceeds our prior experience," said Professor Juliet Pulliam, Director of the South African Centre for Epidemiological Modelling and Analysis.

The findings from South Africa suggest the threshold for 'herd immunity' will be lowered by Omicron and the population-scale cushion provided by infections from previous variants will be undone to some degree.

Given the protection offered by previous infection is mechanically similar to the manner in which vaccines work, overall vaccine effectiveness in preventing the disease will likely be lower, although most scientists still expect strong protection against severe disease.

"This can be considered as likely evidence of Omicron’s ability to evade immunity from prior infection but does not assess vaccine-induced immunity or pathogenicity. We think we'll have to wait for next week for that at the very least," says Naveen Nair at Citibank, in a daily currency market assessment.

Nations are now anticipating further waves of Covid-19 built on the spread of the new variant, with the European Centre for Disease Prevention and Control (ECDPC) saying their mathematical modelling indicates the variant is expected to "cause over half of all SARS-CoV-2 infections in the EU/EEA within the next few months".

"Preliminary data suggest that the Omicron VOC may be associated with increased risk of reinfection in South Africa," said the ECDPC in an assessment update released December 02.

They add that the greater Omicron's growth advantage over the Delta variant and the greater its circulation in the EU/EEA, the shorter the expected time until Omicron causes the majority of all SARS-CoV-2 infections.

The findings come amidst heightened media interest and speculation over the effectiveness of vaccines against Omicron and as to the severity of the disease caused by the variant.

It serves as a reminder that sentiment is febrile and volatility in financial markets is high.

The Pound has traditionally struggled against the Euro and Dollar in times of falling global market sentiment and the current environment lends itself to weakness in both the Pound to Dollar and Pound to Euro exchange rates.

The Pound is down nearly a percent against the Euro over the course of the past week, but against the Dollar it is flat although the past month losses are at 1.40%.

However, a broad risk-off trend in markets will aid Sterling against commodity-linked currencies such as the Australian Dollar, New Zealand Dollar, Canadian Dollar, Norwegian Krone and Emerging Market names which tend to prove more sensitive to risk-off.

Above: Weekly share of tests that are positive in South Africa. Image source: @jburnmurdoch. Copyright: FT.com and John Burn-Murdoch.

"The discovery of US cases of the new variant show that the spread of this new enemy has already begun. Now the issue becomes one of mitigation, and here the policy responses may yet provoke a further short-term hit to equities," adds Beauchamp.

Markets were shaken on December 01 after the United States announced its first confirmed case of the Omicron coronavirus variant.

To get a sense where we are headed, eyes are fixed on South Africa where Covid statistics are increasingly of concern as they show cases are surging at a greater rate than they did under Delta.

The Delta wave has already passed through the population in what was the country's third wave.

But that infections are now spreading far quicker than was previously the case suggests some degree of heightened transmissibility over the already highly infections Delta variant as well as immune escape capabilities, which in turn implies lower vaccine effectiveness.

"Either Omicron is much more transmissible than Delta or it's getting round antibodies from vaccination or previous infection. In all likelihood, due to its bevvy of mutations, the new variant is probably doing a bit of both," says Science and Technology Editor at Sky News. 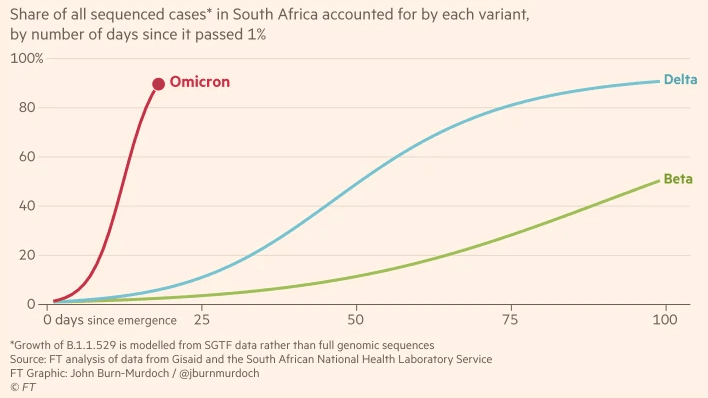 Image courtesy of the FT.com

“There is no world, I think, where [the effectiveness] is the same level ... we had with Delta,” Bancel told the Financial Times in an interview at the company’s headquarters in Cambridge, Massachusetts. "I think it’s going to be a material drop. I just don’t know how much because we need to wait for the data. But all the scientists I’ve talked to ... are like, ‘This is not going to be good’," he added.

But markets regained poise after BioNTech's Uğur Şahin - the inventor of the vaccine that Pfizer manufactures and distributes - said the new variant could lead to more infections, but vaccinated people will likely remain protected from severe disease.

Analyst Lee Hardman at MUFG says BioNTech indicated that enough data will be available after about two weeks in order to provide clarity on the transmissibility, severity, and impact on vaccine efficacy rates.

"That could mean that the end of the week of 6th December could be when we get confirmation of whether this variant could prove disruptive to economic recoveries from the worst phases of the pandemic," says Hardman. 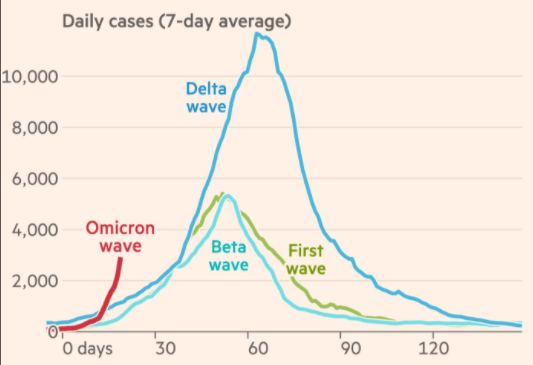 The one area where Sterling could eventually come out as a relative outperformer is if booster vaccines provide the best possible outcome against Omicron.

The UK is a leader in terms of boosters, particularly when contrasted to the US and EU.

"While vaccine efficacy rates are in doubt, the UK is ahead in administering booster jabs with around 25% of the population having received three jabs, possibly adding greater protection against the new variant," says Hardman.

UK authorities announced Monday the speeding up the booster vaccination programme by opening it to all over 18s in a move to shore up protection against a potential wave of Omicron infections.

The date between the 2nd and 3rd doses would meanwhile be reduced to three months from the current six.

"The booster campaign is the next pillar to track. It’s the UK that stands out on this measure, with the EU recently accelerating its efforts," says strategist Jordan Rochester at Nomura. 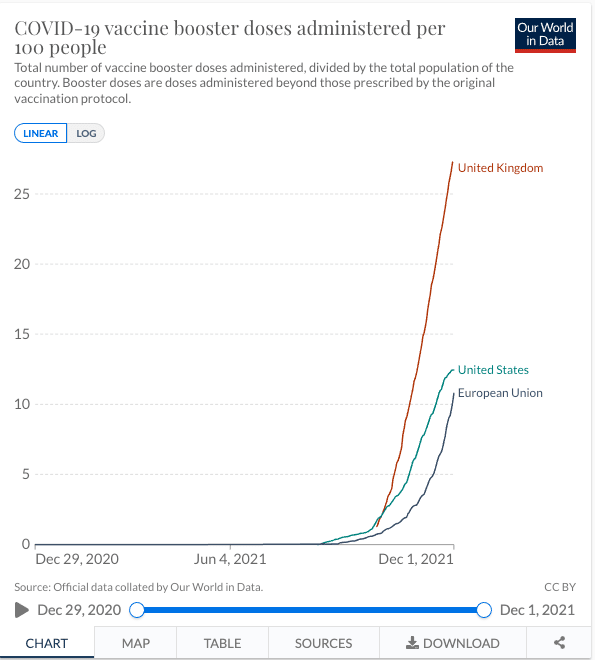 If the UK can avoid another wave of Covid the Bank of England would likely raise interest rates on multiple occasions in 2022, offering the Pound support.

"Widening access to boosters will hopefully increase the UK’s resilience, building on the roll out of our world-leading vaccine programme," says Matthew Fell, CBI Chief Policy Director at the CBI.

43 million people - which is the vast majority of people aged 18 and over - will become eligible for boosters after the government's announcement. But to date 17.5 million people have had a booster.

The NHS has been asked to scale up capacity to meet this demand in as short a time as possible.

MUFG looks for the Bank of England will go ahead and raise interest rates in December - which would boost the Pound given the market no longer sees this as a base case outcome - having taken into account the UK's boost programme.

"We believe the BoE will act based on the better vaccination levels and reduced risk of more severe economic disruption," says Hardman. "A BoE rate hike in December will provide GBP with limited support."