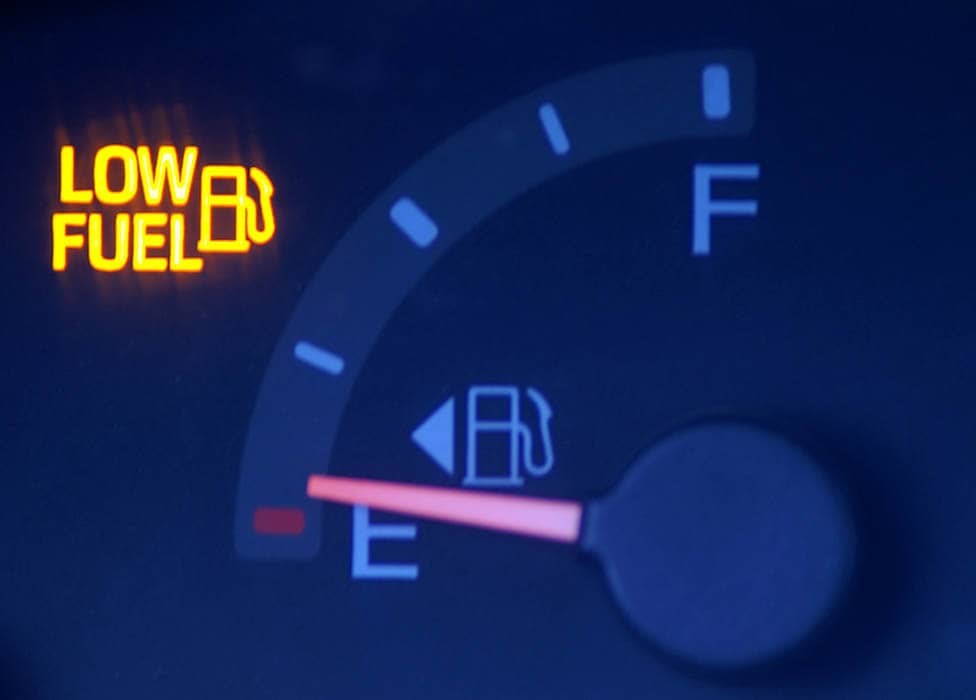 The British Pound suffered a significant loss in value against all the world's major currencies over the course of the past 24 hours and looks vulnerable in the midweek session, as investors fear the UK is headed for a 'winter of discontent'.

Fuel queues at filling stations and surging energy prices means the UK economy will likely suffer a surge in inflation over coming months, while economic growth rates will fall.

"This is a GBP-negative scenario," says George Vessey, UK Currency Strategist at Western Union. "The UK fuel panic combined with the gas shortage also threatens to further disrupt the UK economic recovery – impacting the efficiency and profitability of businesses."

The Bank of England could meanwhile find itself with little choice but to raise interest rates to try and fight inflation fearing it might become entrenched as inflation expectations amongst consumers and businesses grow in response to supply-side shocks. 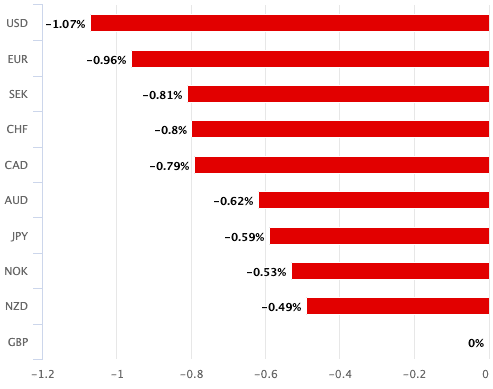 True, the energy crisis is a global phenomenon but the UK looks to be uniquely vulnerable as it went into the crisis with just 1.0% of its gas storage capacity full.

This and a host of other UK-specific factors - notably a lack of specialised HGV drivers - means the country is likely to be amongst the hardest hit by the global energy and supply chain crisis.

"It is hard to look past the supply crunch in fuel as the rationale for the sharp drop, largely because the energy crisis in the UK is now hitting economic activity directly as opposed to going through secondary channels," says Simon Harvey, Senior FX Market Analyst at Monex Europe.

While the fuel crisis adds to a sense of unease regarding the UK economic outlook it could be the surging gas price that is providing the real headache for Sterling.

A look at the below chart for UK gas prices shows two particularly large daily jumps, one on September 20 and the other on September 28: 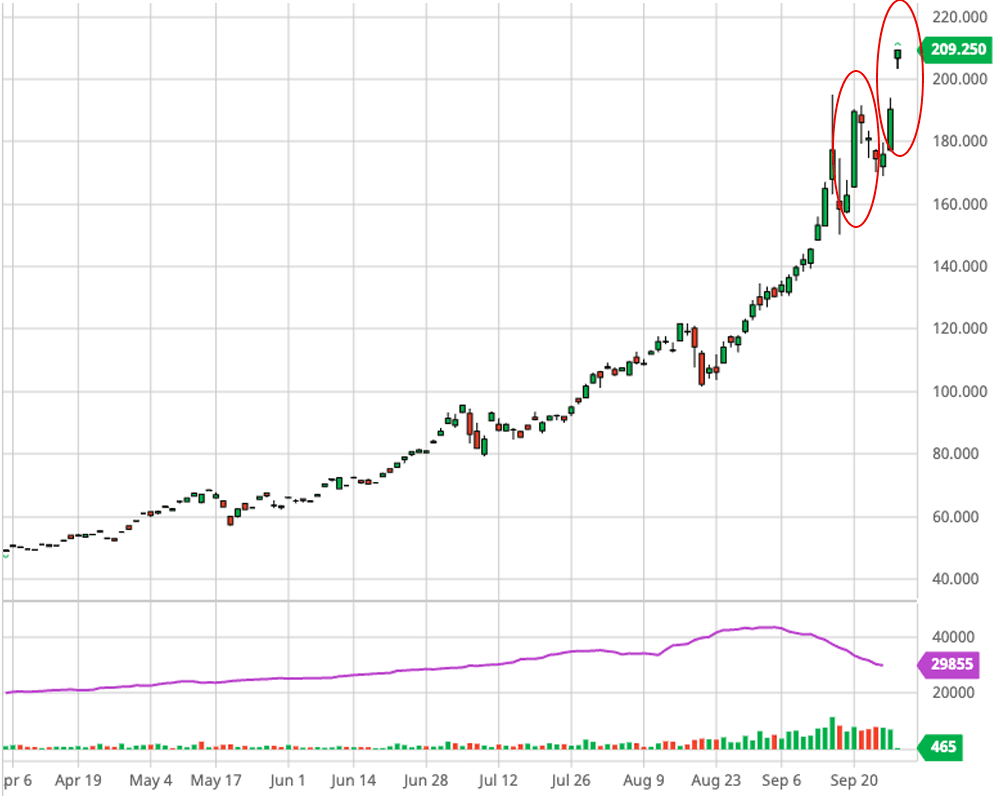 The below chart of the Pound-to-Euro exchange rate show the two biggest drops for the pair came on the same day gas prices surged: 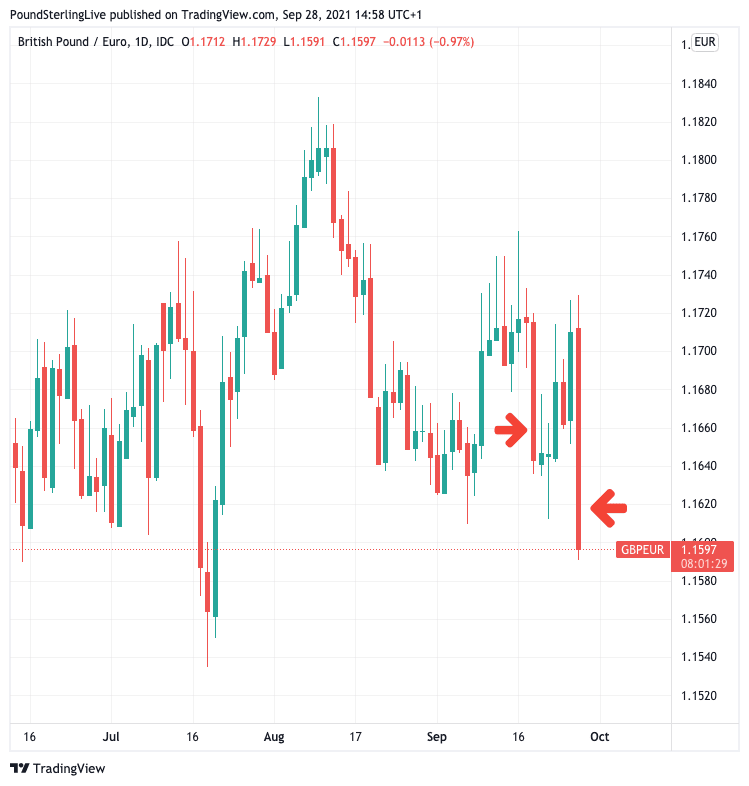 Could it be that the Pound will only stabilise once the global gas price surge ends?

"With the decline looking like it is also in need of some fuel, the question is now when the retracement is set for. Bullish money market positioning etc suggests the pound should be able to vault from here once this narrative clears," says Harvey.

Much of the gas price rise is being driven by China and other Asian countries who are all bidding for the same gas supplies, therefore the real fix is global in nature.

"The latest surge in LNG spot prices reflects strong demand from China and Europe. Growing fears of an energy shortage in China this winter have led to Sinopec, one the largest LNG importers, to outbid European rivals," says Vivek Dhar, Mining & Energy Commodities Economist at Commonwealth Bank of Australia. 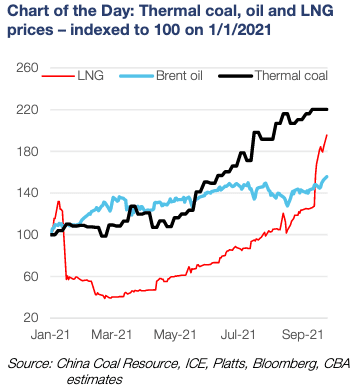 UK bond yields are meanwhile surging; not because investors expect the UK economy to experience exceptional growth but because they expect exceptional inflation.

The yield on UK 10-year gilts rose above 1.0% for the first time since March 2020, a development that would be typically supportive of the Pound. 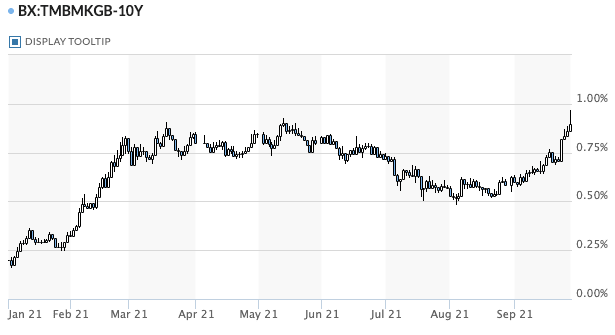 But markets are now worried the UK might enter a stagflationary period, characterised by high inflation, rising interest rates and low growth.

"We have expected higher yields to start materialising around now for a while, with the end of QE from Christmas and the consequent sharp rise in net supply to be digested by the market," John Wraith, head of U.K. and European rates strategy at UBS AG told Bloomberg.

Importantly, the rise in bond yields are not associated with expectations for higher growth as Wraith said it was "concerning" that the move was manifesting through higher inflation expectations rather than real yields.

The fact that inflation-adjusted yields remain low "suggests the selloff is not being caused by rising optimism around the outlook for real growth and activity," he told Bloomberg.

(Real yields are the annualised return a government bond generates once inflation is taken into account, they can provide a reliable read on future economic growth and monetary policy).

The takeaway from bond markets therefore is the market is increasingly concerned about inflation:

UK 10-year breakevens - a gauge of compensation found by subtracting the nominal yield from the real yield - are nearing 4.0%, a level it hasn’t breached since 2008.

By selling the Pound against all other G10 majors investors are saying they are uniquely concerned about the UK economy in the current scenario and we will be watching gas prices and the situation on UK forecourts closely over coming days as a result.