- RBC anticipate substantial declines in GBP
- Says sees no inbound M&A boom for UK
- But this view is challenged by data, other analysts
- A grinding decline for GBP forecast 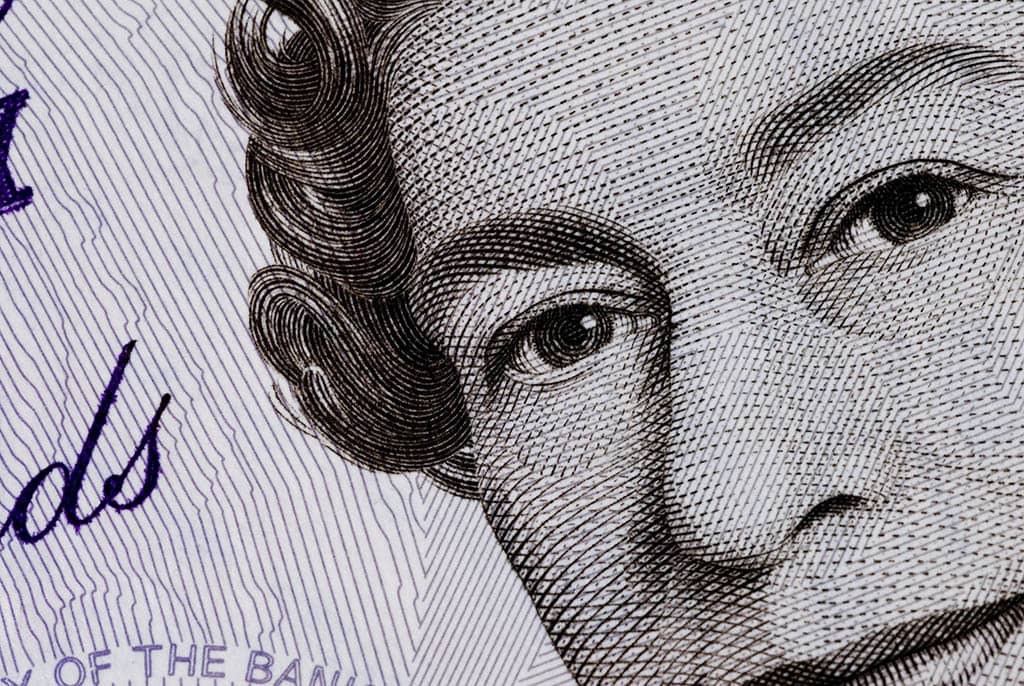 RBC Capital Markets are forecasting sizeable declines in the value of the British Pound before 2021 is out with losses extending into 2022.

Latest forecasts from the Toronto-based international financial services provider shows the Pound could fall back below the 1.30 level against the Dollar by the time 2022 commences, and could even be testing 1.20 by mid-2022.

They meanwhile anticipate the Pound could fall back below 1.14 against the Euro as a bevvy of concerns relating to the UK economy begin to weigh.

So bearish are RBC Capital Markets they anticipate the Pound will fall back to crisis-era levels against the Euro before 2022 is done.

If these calls prove correct the market will experience a substantive shift in fortunes for one of 2021's best performing currencies, but we do note a pivotal argument posited for Sterling's impending weakness is challenged by other analysts and incoming evidence. 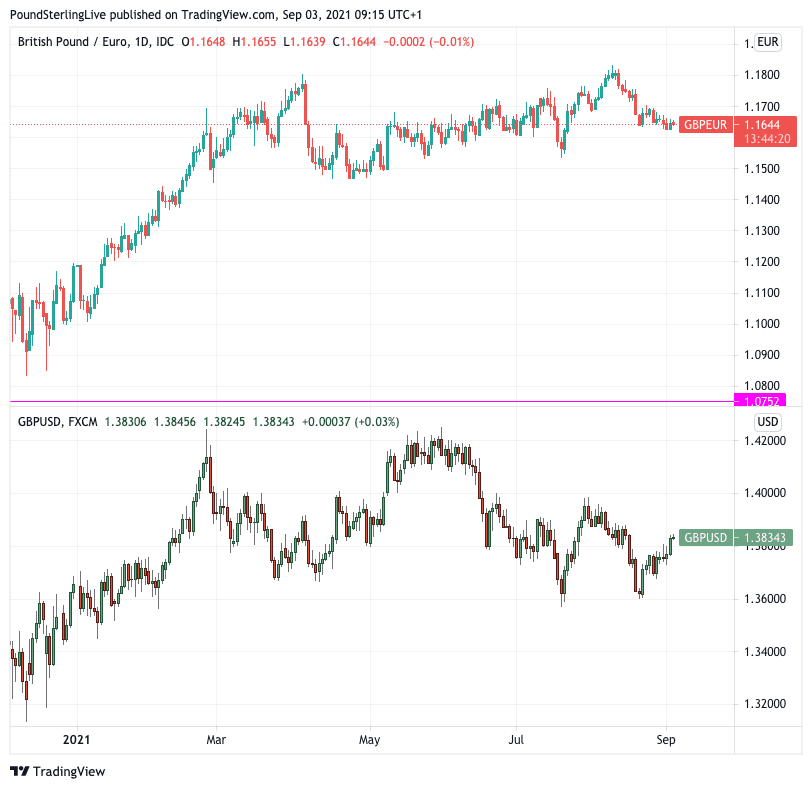 Above: GBP rose sharply in Q1 2021 but has since gone sideways.

Reasons to expect a decline in the value of the Pound cited by RBC Capital includes significant economic uncertainty in the near-term.

"The uncertainty associated with these changes should keep a lid on rate expectations in the short-term," says Cole.

In addition, the analyst expects political tensions between the EU and UK to flare up again as the grace period on custom checks for UK goods going into Northern Ireland expires.

The Telegraph reports the EU and UK negotiating teams have not spoken since July, despite the looming Northern Ireland Protocol deadline. 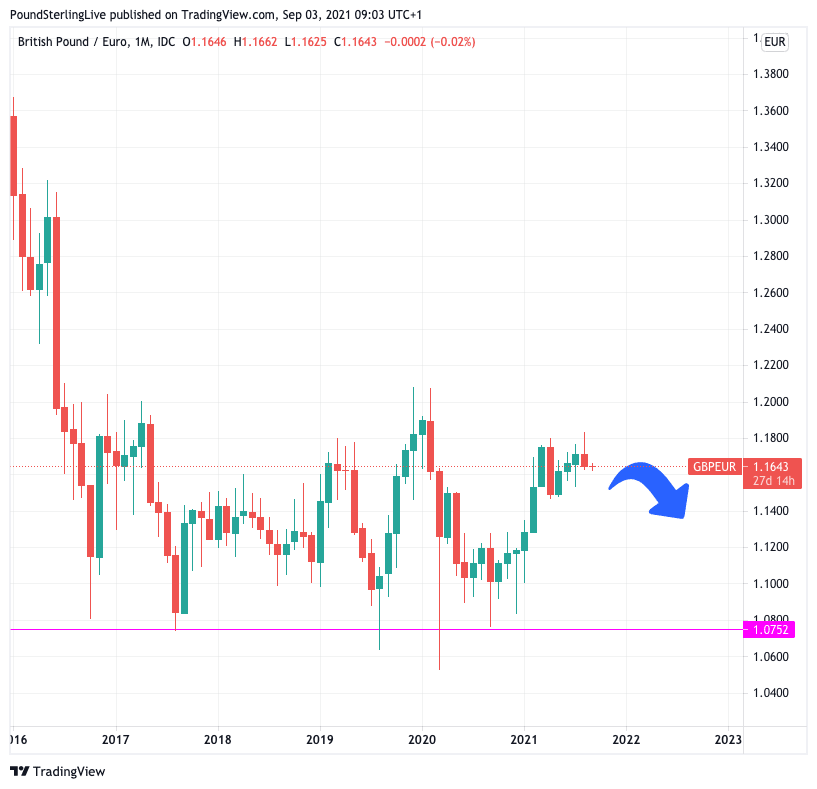 Above: RBC anticipates GBP/EUR to decline back to crisis-era lows.

Economists at the bank expect a deterioration in the UK's budget position as well as a widening in the current account deficit.

The deficit would typically be financed by the inflow of foreign investor capital, but for this to happen UK goods and assets must be cheap enough to attract interest, and RBC expect this to only come about if Sterling trades lower.

"There is no sign yet of the inbound M&A boom that many expect to cover the deficit," says Cole.

But Pound Sterling Live find this particular observation to be at odds with data that shows a discernible increase in M&A activity involving takeovers of UK firms in 2021, findings of which are detailed in this piece out last week.

"With AA motoring group, Asda, Morrisons and Stock Spirits taken over by private equity firms such as CVC, the UK market has recaptured the globe's attention, having seen an unprecedented wave of deals," says Chris Biggs, Partner at Theta Global Advisors, a firm specialising in M&A.

"2021 is proving to be a record year for M&As and other kinds of deals as a large amount of uncertainty melts away that has lingered from Covid and Brexit. It is a perfect storm of returning optimism, loosening restrictions and undervalued firms," he adds. 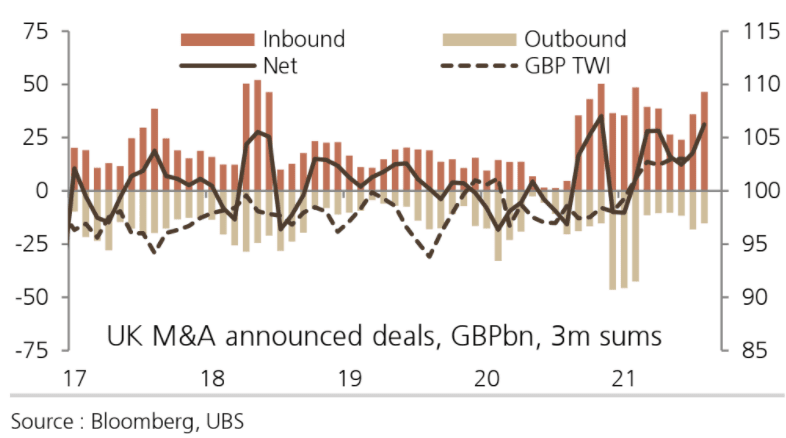 Above image courtesy of UBS.

"August was another good month for UK inbound deals, which put GBP at the top of the z-score ranking," says Vassili Serebriakov, Strategist at UBS.

Schroders says on average UK companies were being undervalued by around 30% owing to the Brexit risk premium and Covid crisis, valuations that understandably drive foreign investor demand for UK plc.

But for RBC Capital Markets, this discount is not convincing enough and further declines in the value of the Pound will be required to make UK assets even more attractive.

"Our longer-term expectations for GBP have to include the risk that attracting the foreign inflows the UK will need requires a relative cheapening of UK assets via the currency," says Cole.

"We therefore expect grinding GBP underperformance to continue into the medium-term," he adds.

Notably, the Euro is being forecast to push the Pound back to crisis-era levels by the end of 2022 with 0.93 being forecast. (These levels previously being seen around the time of the 2008 financial crisis, Covid crisis and at various points of high anxiety relating to Brexit).