The British Pound has rebounded against most major currencies as July comes to a close, but next week's pivotal Bank of England policy update could invoke some caution amongst investors.

Advances by the Pound come amidst falling Covid cases in the UK and an assumption the Bank of England (BoE) will be amongst the first tranche of Developed Market central banks to raise interest rates in light of a strengthening economy and rising inflation levels.

Central bank policy expectations continue to underwrite foreign exchange market action, with those central banks closing in on a rate hike offering support to their currencies.

"With the Fed demanding a stronger job market before it tapers stimulus, it suggested that the U.S. central bank may not move before its British counterpart, buoying sterling. Sterling capitalised on the setback to the dollar as GBPUSD turned positive for July and for 2021, a marked rebound from five-month lows last week," says Joe Manimbo, Senior Analyst at Western Union Business Solutions. 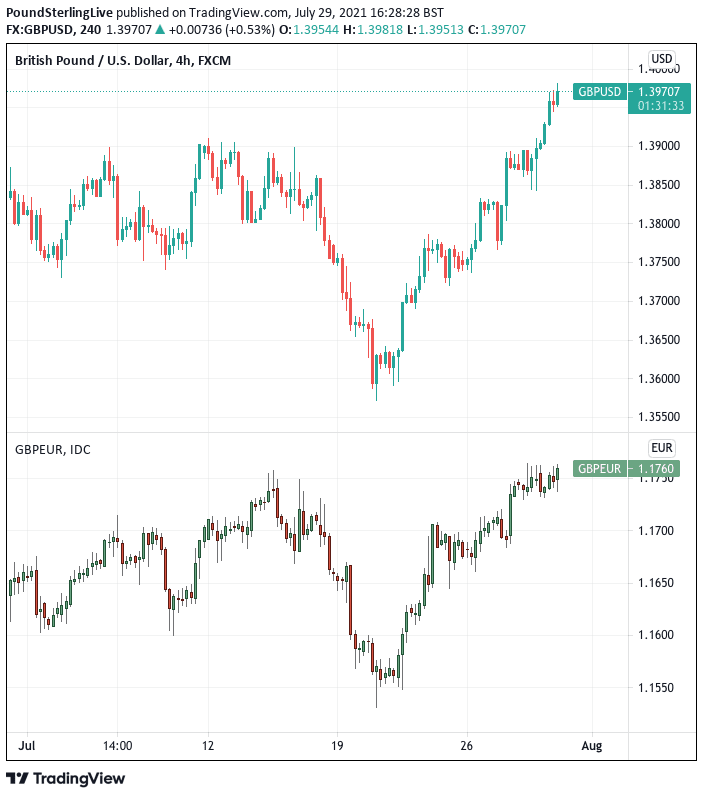 Investor caution will likely increase in the immediate run up to next Thursday's Bank of England policy update and Monetary Policy Report, where new forecasts for the economy will be issued alongside updated forward guidance on the future of interest rate policy and quantitative easing.

"Anticipation ahead of next Thursday’s BoE meeting – also considering the recent signals of a split within the Board – could help contain sterling’s upside for now," says Asmara Jamaleh, Economist at Intesa Sanpaolo.

Longer-term, Jamaleh says the pound could have a larger margin to strengthen compared to the euro, as the BoE is expected to reverse its policy stance much sooner than the European Central Bank.

Consensus expectations suggest no change in policy is likely nor will there be an eye-opening shift in tone regarding the outlook.

Despite UK inflation now running above the BoE's 2.0% target, Monetary Policy Committee (MPC) member Jonathan Haskel struck a note of caution about rushing into a rate rise in a recent speech, noting that a wave of Covid infections linked to the Delta variant was creating uncertainty about the economic outlook.

Economists we follow have said this view is likely to be shared by a majority of Haskel's MPC colleagues and therefore a significant turn in direction towards higher rates was not likely to be initiated on Thursday.

"The BoE does probably want to prevent any hasty decision and instead would prefer to wait for a few more economic data. This could disappoint some pound investors and put an end to the pound rally for the time being," says You-Na Park-Heger, FX and EM Analyst at Commerzbank.

Yet, since Haskel spoke in mid-July Covid-19 cases have fallen sharply and scientists are of the view that the third wave has crested and is now breaking.

"The likelihood the UK government re‑introduce growth‑crushing lockdowns continues to diminish because daily new confirmed Covid‑cases in the UK have rolled‑over and the vaccination rate is high," says Martin Whetton, Head of Fixed Income & Currency Strategy at Commonwealth Bank of Australia.

"The risk the Bank of England adopts a less dovish stance at the 5 August policy‑setting meeting bodes well for GBP," he adds. 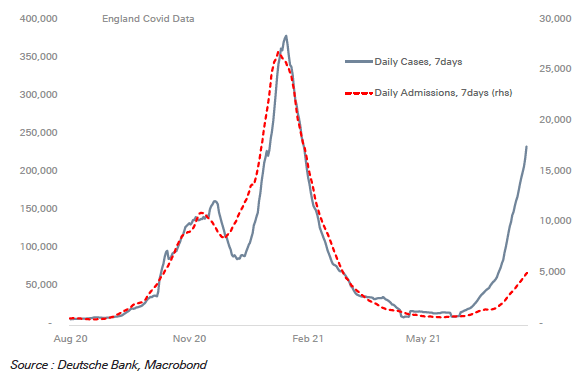 Foreign exchange markets have through the course of 2021 brought forward the timing of the BoE's first rate rise and now see that hike taking place by around the middle of 2022.

This dynamic has aided UK bond yields higher and Sterling exchange rates have rallied in tandem.

How expectations shift next Thursday will therefore impact both yields and exchange rates.

Any hints that a rate rise might occur in the first half of 2022 would be an outcome consistent with the more 'hawkish' end of market expectations and would therefore likely trigger gains in the Pound.

But such a rush into a rate hike is unlikely says Deutsche Bank.

In a research briefing Deutsche Bank warns that while UK inflation might hit 4.0% in coming months the economy won't grow as fast as the Bank of England expects, therefore making a lift off in interest rates in August 2022 a likely outcome.

Most economists agree that the BoE will confirm it is to reduce the size of its quantitative easing programme (asset purchases) at the August meeting to ensure the programme ends as planned in December.

But, Wells Fargo - the U.S. based bank and international financial services provider - says an initial interest rate increase is still some ways off, likely not until sometime during the first half of 2023.

Such a view, if correct, would disappoint those looking for a stronger Pound.

"Given mixed comments from Bank of England policymakers, an uncertain outlook could encourage the central bank to continue with its quantitative easing program for longer than expected. Market participants could also push back the expected timing of any initial rate hike," says Nick Bennenbroek, International Economist at Wells Fargo Securities, LLC.

Although the Covid situation in the UK looks to be of diminishing concern there remains a degree of uncertainty as to how the country's labour market will evolve over coming weeks, particularly given the government's job support scheme (furlough) comes to an end in September.

The BoE remains uncertain as to what the end of furlough will pose for unemployment levels, fearing that a spike in unemployment will mean the economy takes longer to reach pre-Covid levels.

Furthermore, the rebound in UK economic growth has moderated of late which could also give the BoE reason to remain cautious about the outlook.

"Recent activity data have pointed to a growth slowdown," says Bennenbroek. "A downshift in economic growth and a more patient central bank would be a less favourable mix for the pound. In this scenario, the GBP/USD exchange rate might not gain much past $1.4000".

Wells Fargo anticipate moderate appreciation in the Pound over time; "however, the risks of a slower and smaller appreciation are growing," says Bennenbroek.