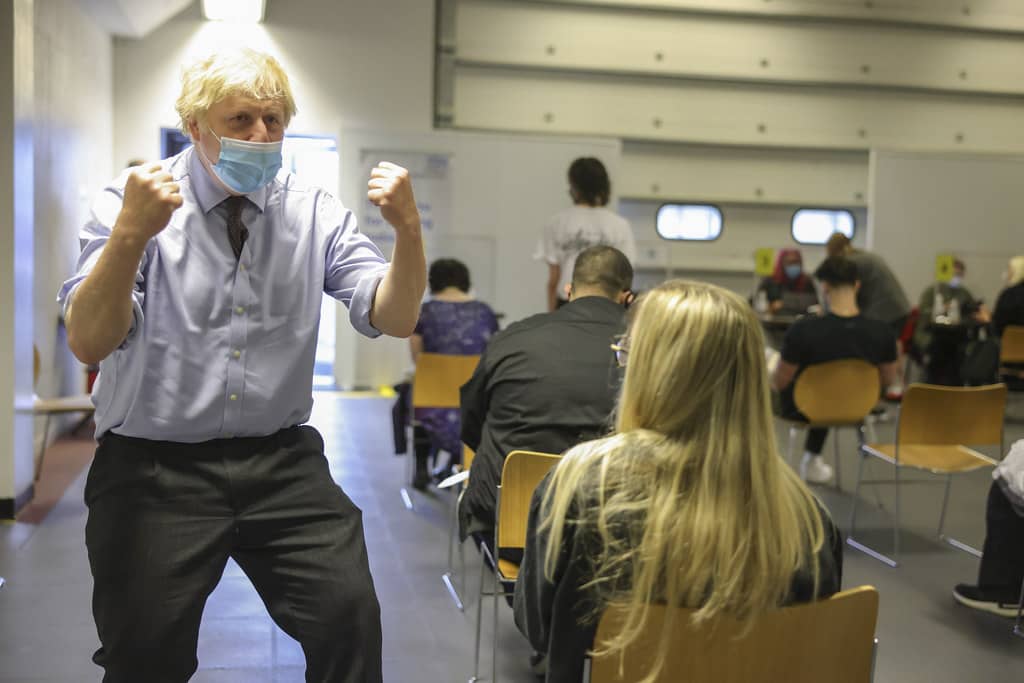 Above: The UK's rapid vaccine rollout is seen as one of the few major sources of support for GBP by a noted analyst. Picture by Andrew Parsons / No 10 Downing Street.

New analysis from a leading independent research house casts doubt on the British Pound's ability to sustain 2021 gains, with a combination of disappointing economic growth and political sensitivities being eyed as headwinds.

"We continue to doubt that sterling's rally will get back on track," says Samuel Tombs, Chief UK Economist for Pantheon Macroeconomics.

Tombs has a strong record when it comes to making forecasts for the UK economy as he was ranked the most accurate forecaster of the UK economy in 2020 by Refinitiv, which compiles predictions every week from all City economists.

He also topped the annual ranking of forecasters for the UK economy compiled by The Sunday Times in 2014 and 2018, as well as coming joint-top in 2019.

For Tombs, as is the case for many currency analysts, it is expectations on central bank policy that will be in the driving seat for the Pound over coming weeks and months.

And for the Pound, any good news on this front might already be fully accounted for.

Tombs identifies overnight index swap markets as implying investors currently expect short rates in both the U.S. and the UK to rise by about 30 basis points in 2022 as their respective central banks raise rates.

"So, in order for sterling to rise further this year, it must become the conventional wisdom that the MPC will hike sooner and/or further than the U.S. Fed. Such a development seems highly unlikely," says Tombs. 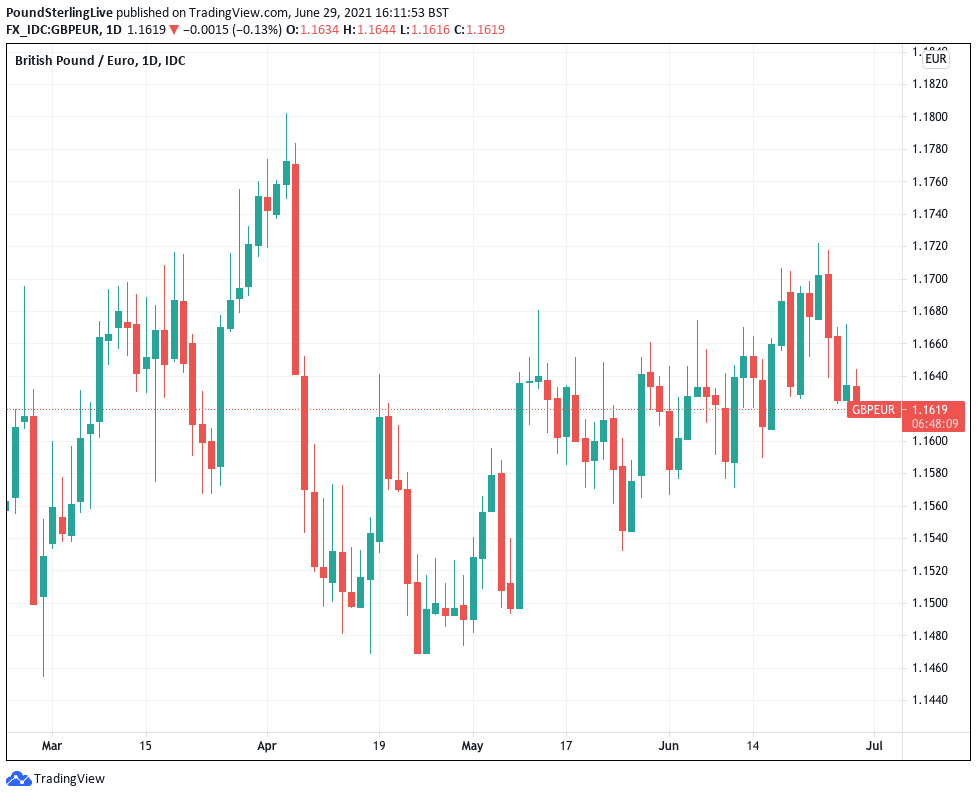 Above: Pound to Euro exchange rate since March

The Bank of England is meanwhile almost certainly likely to raise interest rates ahead of the European Central Bank where investors expect the first rate rise to come in 2024.

But even here, for the Pound-to-Euro exchange rate to rise further from current levels Bank of England rate rise expectations must continue to come forward and this will only be possible on the back of exceptional economic data.

Tombs says the UK economy will benefit from the country's high vaccine take up, but vaccination rates appear to be one of the only strong cards Sterling bulls are holding.

"The U.K.'s very high vaccination rates limit Covid risks, but fiscal tightening and restructuring will hold it back," says Tombs.

Pantheon Macroeconomics estimate UK public borrowing will fall to 9.0% of GDP this fiscal year, from 14.5% last year, and then to about 5% in 2022/23, constraining economic expansion.

"As in the late 2010s, when the U.K. government ran a relatively tight ship, monetary policy will need to be tighter in the U.S. than in the UK," says Tombs.

In addition, politics are identified as a potential headwinds for valuations in the Pound.

The findings suggest that despite the completion of Brexit the Pound remains to an extent a politically driven currency. 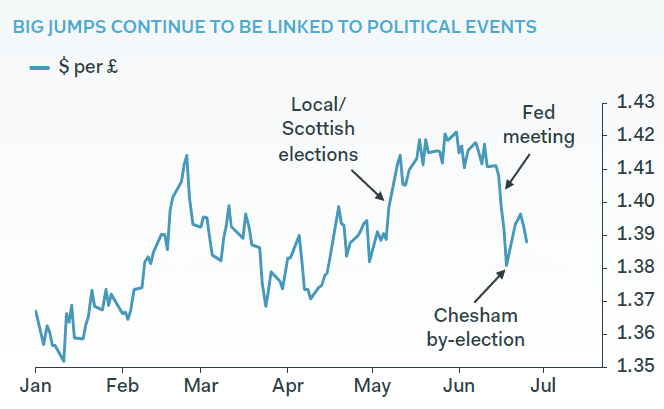 The Pound rose after the Scottish parliament vote in May that saw the SNP fail to secure an outright majority, which political commentators said stunts their ability to call a new referendum.

Tombs also notes the pound dipped on June 17 after the Conservatives lost the seemingly-safe seat of Chesham and Amersham to the Liberal Democrats.

"This suggests that sterling will be responsive on Friday morning to the results of the Batley and Spen by-election, which the Conservatives are favourites to seize from Labour," says Tombs.

But looking much further ahead, Tombs says Sterling will weaken if the odds of a Conservative win at the next election start to drop, though much will depend on how radical Labour leader Sir Kier Starmer intends to be, "and whether he would have to rely on support from the SNP, who would then demand 'IndyRef2' as the price of a coalition."

"We think sterling will trend lower against the dollar over the next year," adds Tombs. Pantheon Macroeconomics forecast the Pound-to-Dollar exchange rate to "ease to around $1.35 by the end of this year."

With regards to EU-UK politics, recent developments are supportive.

It is reported that the UK now expects to reach an agreement with the European Union on extending a grace period for post-Brexit trading rules in Northern Ireland, a move that would reduce tensions between the two sides.

We noted rising tensions over the Northern Ireland protocol as being a potential headwind to the Pound for much of June, particularly given EU threats to sanction UK exports unless a suitable solution was agreed.

Under current arrangements, the sale of chilled meats and fresh sausages into Northern Ireland from the rest of the UK is due to be banned when a transition period to let companies adapt expires at the end of June.

"We expect to agree an extension to the chilled meats grace period on terms that are acceptable to the UK," Prime Minister Boris Johnson’s spokesman, Max Blain, said on a call with reporters on Tuesday.

European Commission Vice-President Maros Sefcovic said Monday he was "confident" there would be a solution, after the UK requested a three-month extension to the grace period. 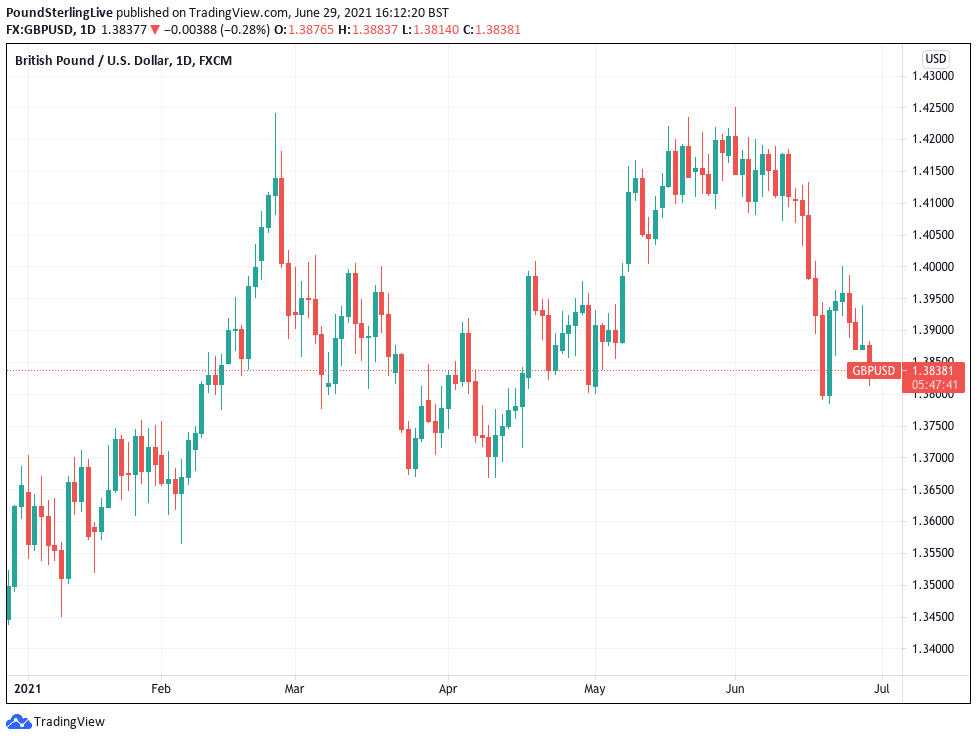 Above: Pound to Dollar exchange rate in 2021

Foreign exchange analysts at Goldman Sachs meanwhile say this week they do not hold the Pound as a current top pick for appreciation potential.

In a regular weekly currency research briefing to clients Goldman Sachs says while they think one of the key market drivers in coming months will be the rotation in growth leadership towards Europe, "Sterling is not among our top currency picks and recent developments have reinforced that view".

A concern for Goldman Sachs is the rapid rise of Covid-19 cases in the UK, driven in large by the Delta variant of the disease.

Pandl says the rise in Covid-19 cases helps explain why the BoE "stayed the course last week, and the subsequent market reaction demonstrates that market pricing is sufficiently aggressive, such that even the lack of a policy shift was enough to weigh on the currency".

Holding a similar view to that of Tombs, Pandl says monetary policy will remain a headwind for Sterling in coming months.

"We stick with an underperformance view for GBP vs EUR for the time being," says Pandl.

But other economists are more sanguine on what the rise in cases of the Delta variant pose to the UK economy and its currency, saying the Bank of England can become more 'hawkish' as a result.

"Despite a concerning rise in Covid cases, the evidence so far is that vaccination offers good protection from severe illness. Given this, the government seems intent on ending social restrictions on 19 July," says Philip Shaw at Investec. 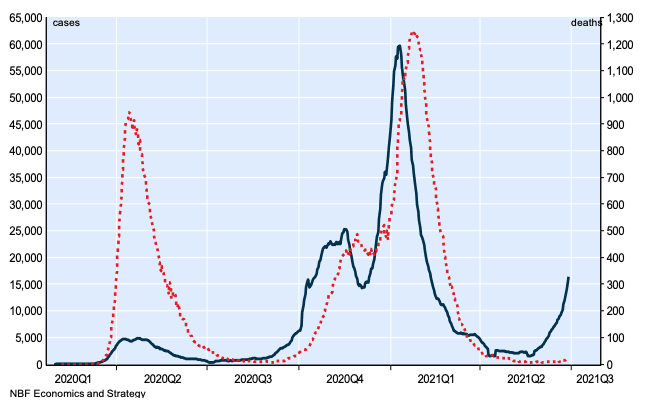 Above: Evidence of the effectiveness of vaccines. Courtesy of NBF.

A final exit from restrictions on July 19 was largely confirmed by incoming Health Secretary Sajid Javid when he addressed Parliament on Monday June 28.

This stance underpins Investec's view that the economic recovery will proceed, probably even a little faster than they previously thought: they have lifted their 2021 GDP growth forecast by 0.2% pts to 7.9%, and acknowledge it could be higher still.

And this could prompt the Bank of England into a more hawkish stance that ultimately could help the Pound appreciate.

"We detect more of a hawkish tone in the MPC’s statements than the market, driven by concerns that the rise in inflation could persist for longer. As such, although our baseline case is that a first policy tightening will come in Q2 2022 via some reversal of QE, there is a chance that this is brought forward and even that the policy rate is raised at the same time," says Shaw.