- SNP on course for a big win
- Outcome could dent confidence in GBP
- But damage to GBP to be limited: Analysts 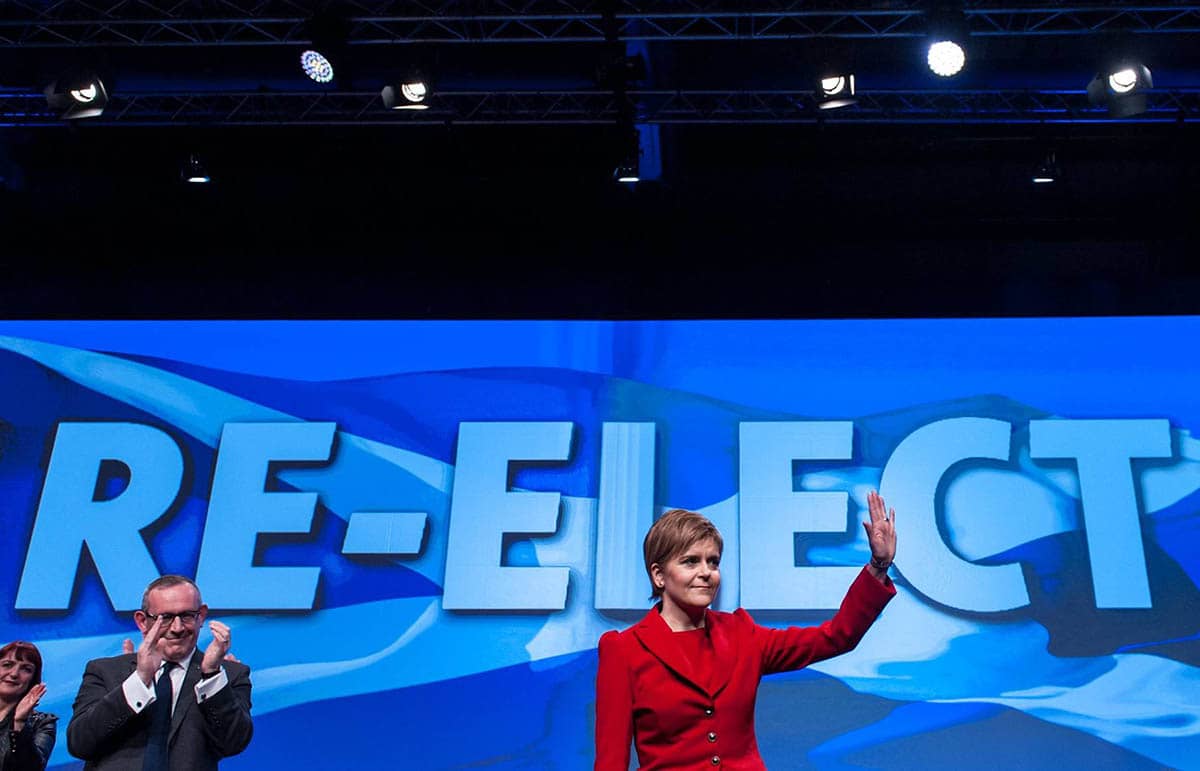 But days after the Bank's decision politics will come to the fore with the results of the Scottish parliament elections being announced, an outcome that could set in motion the wheels to a breakup of the United Kingdom.

Scotland's first minister Nicola Sturgeon has said the SNP will earn the right to hold a second independence referendum by the end of 2024 should they win a majority in the Scottish elections.

Sturgeon said the UK Government was "not entitled to stand in the way of the democratic choices of the people of Scotland" and would have to take the Scottish government to court to stop her second referendum.

"Turning to the GBP-negatives," says David Forrester, FX Strategist at Crédit Agricole. "Growing political uncertainty ahead of the 6 May elections in Scotland and local elections elsewhere in the UK could continue to fuel headwinds for the GBP." 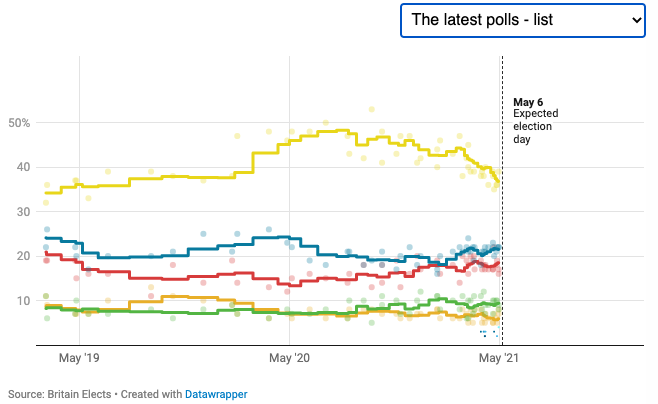 Above: Poll of polls for the list vote, Source: New Statesman.

The SNP are on track to secure a majority of seats in Holyrood, according to the latest research from Opinium.

The polling firm puts the SNP’s constituency support at 51% and regional support at 41%, pointing towards a majority of five.

The poll conducted for Sky News also found that support for independence is now equally tied 50-50 once "don't knows" are excluded, down from 51-49 in the last Opinium poll.

"The May elections will be the first proper indication of whether independence support has shifted and could lead to markets pricing in Scottish independence more than previously," Jordan Rochester, a strategist with Nomura. "It really would not be surprising to see the SNP do well." 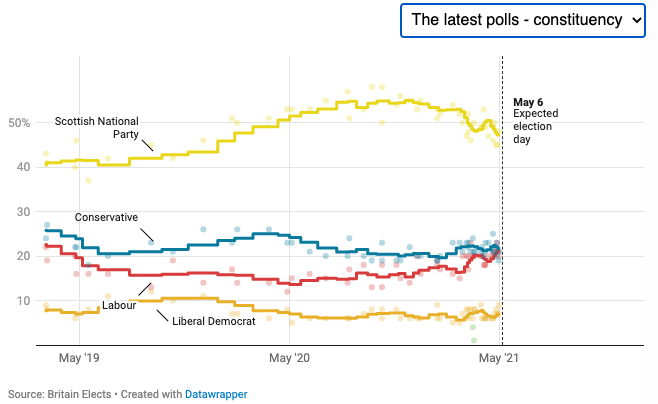 Above: Poll of polls for the constituency vote, Source: New Statesman.

Foreign exchange analysts have been saying over recent weeks that the impending vote could help explain why the British Pound has fallen back from its 2021 highs during the course of April.

Of course there are numerous factors determining the Pound's performance at present, but the impending vote appears to be sharpening investor minds as to the shape of future political disruptions the UK and its currency might face.

"I wonder whether markets have actually considered the full ramifications of this election," Julian Howard, director of multi-asset solutions at GAM Investments, told Bloomberg.

GAM Investments are "strategically positioned for a decline in sterling," according to the newswire. 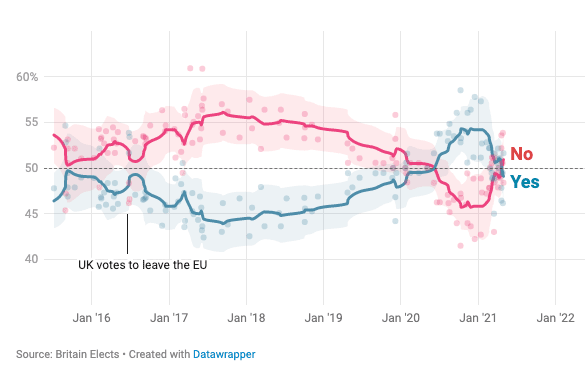 Above: Poll of polls for independence, Source: New Statesman.

"It would be a lot worse than Brexit as Scotland is much more closely stitched to the U.K. than Britain was into Europe. We're talking since the 1700s rather than the 1970s," says Howard.

The Pound-to-Euro exchange rate traded as high as 1.18 in early April before beating a retreat back to the 1.14-15 levels currently being seen at the start of May.

The Pound-to-Dollar exchange rate peaked at 1.42 before paring back advances to the 1.38-1.39 range those watching the pair are becoming increasingly familiar with.

The outcome of Thursday's vote will only likely be known at the weekend, given social distancing rules will make the counting process more drawn out.

Any market impact would therefore only likely arrive on Monday. "If a country accounting for 7.5% of the UK’s GDP decides to go its own way, it matters for the market," says Rochester.

But Rochester is ultimately sanguine on the impact on the Pound, using the example of Brexit to explain how the smaller entity in any break-up suffers the most.

"The UK made up 16% of EU GDP when it left, yet the pain was mostly felt by GBP, not EUR. The same could be said for the Scottish question. Yes, GBP would likely trade lower in the aftermath of a referendum resulting in Scottish independence," says Rochester.

But there will likely be no "repeat of the four agonising years of the 'will they, won’t they?' 2016-20 Brexit period for the pound."

Instead, Nomura expect it will be mostly Scottish assets that are affected by the wave of uncertainty, with many questions raised as to what this will mean for Scotland’s economy, terms of trade, currency and interest rates.

The head of NatWest Markets last week said the bank would have to move its headquarters to London in the event Scotland votes for independence as the bank's balance sheet is far too big for the small economy that an independent Scotland would possess.

Analysts at Barclays say they don't expect any hit to the Pound caused by looming political intrigue to persist.

"Any near-term GBP weakness triggered by elections should be faded," says Erick Martinez, an analyst with Barclays.

Barclays research shows that while the Scottish parliamentary elections will very likely yield a pro-independence majority, significant political and constitutional hurdles will remain in the way of achieving another independence referendum.

Analysts at ING Bank N.V. have meanwhile briefed clients ahead of the vote that they anticipate the impact of the Scottish elections on Pound exchange rates "to be very limited".

Petr Krpata, Chief EMEA FX and IR Strategist at ING says the options market appears to have already priced in any associated risks regarding the vote, implying any negatives are already 'in the price'.

"It does not come as a surprise that the event risk also looks to be priced in by the options market," says Krpata.

ING says the option premium in Sterling markets is not meaningful while the bulk of this event risk has more to do with the May Bank of England meeting due to be held on the same day, "rather than the Scottish election".

"This is in line with our view that the event risk is modest and should not be overestimated," says Krpata.

ING research finds a referendum could be years away rather than months, even if pro-independence parties win a majority.

Furthermore, as was the case with the Brexit referendum, the risk premium started to be built into GBP only six months ahead of the event.

ING's analysis of the 2014 Scottish referendum finds the event did not translate into a material build-up of GBP risk premium, suggesting the referendum itself and any breakup of the UK would have less of a negative impact on the remainder of the country than it would on Scotland.