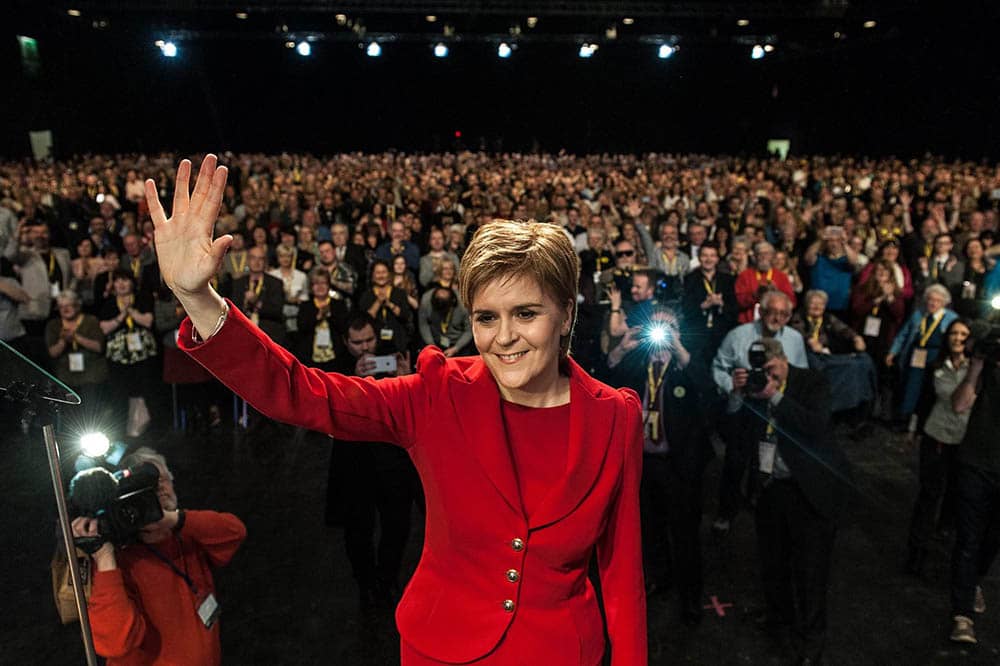 Foreign exchange analysts are saying the lacklustre performance of the British Pound during April could be in part due to rising political uncertainties linked to the imminent Scottish elections and that any meaningful gains will be unlikely ahead of the vote outcome.

Scotland will vote for the next Holyrood parliament on May 06 and political commentators say a strong result for pro-independence parties will raise pressure on the UK government to grant another independence referendum.

Paul Robson, Head of G10 FX Strategy at NatWest Markets says his team have cut exposure to the Pound in anticipation of the vote and any subsequent result that could pose questions on the long-term viability of the United Kingdom.

“It’s about event risk and long Sterling positioning," he says in a recently published strategy note.

Polls show the pro-referendum SNP party of Nicola Sturgeon is on course to win the vote, but, of late the question of whether the party can secure a majority has grown.

The SNP's high-water mark in the polls appears to have occurred towards the end of 2020 but have since faded while the Conservatives and Labour have seen their share of the polls increase. 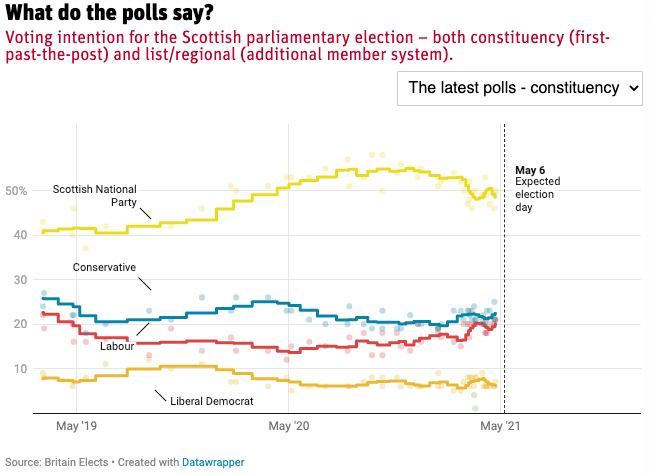 Above: Scottish constituency'poll of polls' data from the New Statesman.

Should the SNP win a majority Sturgeon says it is a tacit endorsement of her party's desire to secure a second referendum.

This is "an election that matters," say analysts at Berenberg Bank.

In a recent briefing to clients Berenberg says the Scottish parliamentary elections could result in a majority for parties in favour of Scottish independence.

Not only do the SNP support the holding of a second referendum, but so does the Alba Party and the Greens.

Any combination of outcomes could therefore result in a pro-independence majority.

"Such an outcome could make waves in markets and refuel worries about the UK’s prospects following Brexit – which has raised the tail risk that Scotland may one day leave the UK to re-enter the EU as an independent country," says Holger Schmieding, Chief Economist at Berenberg.

If analysts are correct, and anxieties related to the Scottish vote are weighing on Pound Sterling, confidence in the 2021 rally will only likely return should pro-independence parties be deprived a clear mandate.

"On the announcement of the May 6th election results, GBP may respond and weaken on the day if the SNP were to win a large majority of seats but we don't think the market impact would be long-lasting," says Sheena Shah, a foreign exchange strategist with Morgan Stanley.

The vote will come as the Pound's strong start to the year is whittled away by the losses seen during the course of April, with the Pound-to-Euro exchange rate having receded from a peak at 1.18 on April 05 to 1.1519 with just days to go before the Scottish vote.

Regular readers of Pound Sterling Live will be well aware that there are numerous and often-times contradictory factors at play with regards to the British Pound's valuation, particularly in such extraordinary times.

A particular focus at the present time is how the UK's economic data has started to perform in impressive fashion, courtesy of the easing of lockdown restrictions.

A great deal of positivity towards Sterling and expectations for appreciation in 2021 are in turn linked to this expected rebound of the UK economy in coming quarters.

April's losses by the currency suggest to some analysts that other non-economic factors are therefore at play in determining the Pound's performance, notably political uncertainty.

"Although the optics around the UK remain positive with a further significant easing of lockdown restrictions and encouraging Covid-19 trends, the elections do present event risk to the near-term outlook," says Robson. 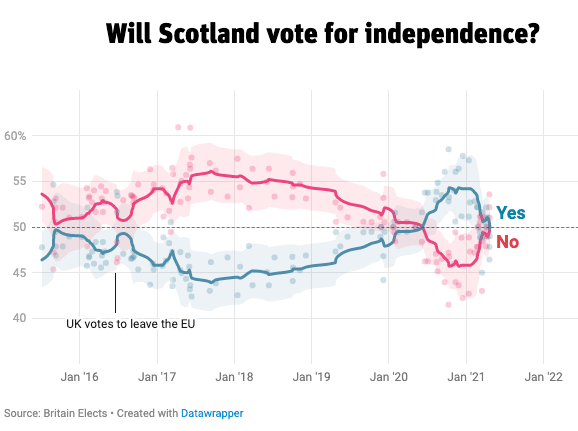 Above: Scottish independence 'poll of polls' data from the New Statesman.

"Increased chances of an independence referendum would most likely play Sterling negative, so the currency will be sensitive to the size of any majority for Nationalist parties (and hence polling in the run-up)," says Robson.

Robson says it is the concern over the outcome of the Scottish election that saw him and the team at NatWest markets reduce their bullishness towards the Pound two weeks ago.

Foreign exchange analysts at Barclays also observe how recent data prints continue to point to robust economic recovery in the UK and say it should ultimately benefit the Pound.

"However, the GBP seems to be insulated from this positive news and failed to appreciate, likely reflecting a build-up in FX premium associated with the upcoming Scottish elections and potential second Scottish independence referendum," says the Barclays research team in a regular weekly FX briefing.

Barclays are also looking at the Scottish vote and say Scottish independence could only materialise as a result of a very long and difficult process, which would create a pipeline of years of uncertainty.

The experience of the 2014 Scottish referendum and the 2016 Brexit referendum - and subsequent result - serve to underpin the significant downward drag politically-induced uncertainty can bring to bear on Sterling exchange rates.

"Consequently, we believe that some uncertainty will be resolved only after the elections and the market will decrease its sensitivity to the referendum-related issues," says Barclays.

The Pound declined as uncertainty concerning the outcome of the 2014 independence plebiscite built, with a sharp rally occurring after it was clear the independence movement lead by Alex Salmond had been defeated.

"According to the latest polls, the upcoming local elections in Scotland could give a supermajority to the pro-independence parties – the SNP, the Greens and the newly-formed Alba party," says Valentin Marinov, Head of G10 FX Strategy at Crédit Agricole.

"There doesn’t seem to be that many positives left for the GBP," he adds.