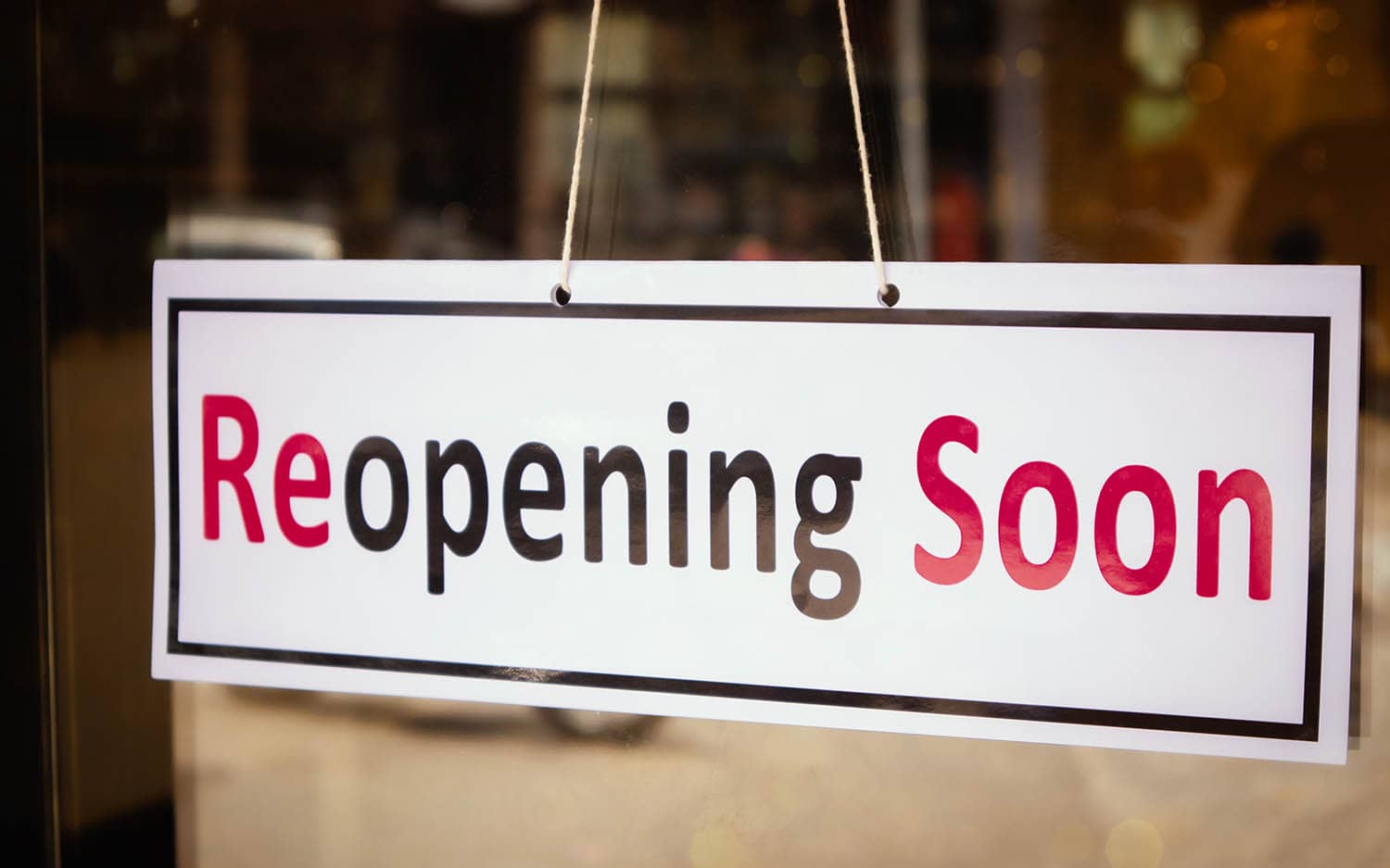 Prime Minister Boris Johnson has laid out the government's roadmap out of lockdown which shows a return to normality is only likely by June at the earliest, but economists have said the cautious approach will still put the economy on course for a strong rebound.

Foreign exchange markets welcomed the new guidance which appeared to offer credible timetable and sent the British Pound higher against its major peers, with the Pound-Dollar exchange rate hitting a new multi-month high at 1.4075.

The Pound-Euro exchange rate started the week on the defensive but recovered in the wake of the Prime Minister's announcement to go to its highest levels since March 2020 at 1.1582.

"The economy will rebound a little later than we had assumed previously, following the cautious plan for relaxing restrictions unveiled by the Prime Minister. But the government's caution also increases the likelihood that a major fourth wave of the virus will be avoided, and that the recovery will be sustained," says Samuel Tombs, Chief UK Economist at Pantheon Macroeconomics. 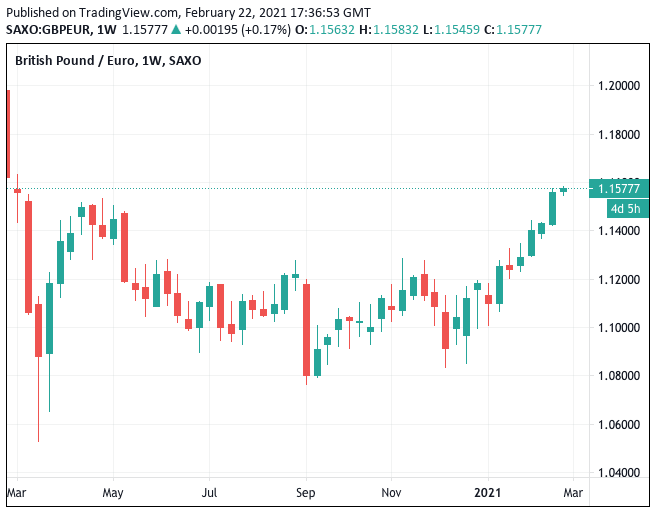 Above: GBP/EUR at weekly intervals showing a multi-week run of gains.

"We think that the government’s roadmap for easing England’s current COVID-19 lockdown will direct the economy back to its pre-pandemic size by Q1 2022. With the Chancellor and the Bank of England unlikely to knock the economy off course with tighter policy," says Paul Dales, Chief UK Economist at Capital Economics.

Johnson said the reopening of the economy would commence with the return of schools on March 08, with a further easing of restrictions at the end of March. The programme would culminate in the reopening of nightclubs and the holding of mass events and elimination of all restrictions by June 21, provided all went to plan.

Johnson said he would "cautiously but irreversibly" unlock the country.

There are however concerns amongst some stakeholders that the pace of reopening is too slow and that further damage will be inflicted on the economy as a result.

Exiting the lockdown matters greatly for the country's economy given the UK currently has the strictest lockdown in the developed world according to the Oxford University Blavatnik School who have track restrictions across the world:

The stringency of lockdown regulations will have a material impact on businesses, particularly the significant number of small businesses that failed to receive any support from the government during the pandemic.

The fear is that a slow easing of lockdown will make more and more businesses unviable, which will in turn blunt the economic recovery and potentially Pound Sterling's rally.

"Non-essential retail, hairdressers, etc will not be reopening until April/May. Closure of these activities has been the most economically damaging aspect of the lockdown, so not good news for business and the economy," says Andrew Sentance, Senior Adviser to Cambridge Econometrics.

Nevertheless, many businesses have welcomed the clarity that the announced roadmap brings, even if some would prefer to see steps to unlock taken sooner.

"There is no credible route to a zero covid Britain or indeed a zero covid world," said Johnson. "We cannot persist indefinitely with restrictions that debilitate our economy, our physical and mental wellbeing, and the life chances of our children."

Capital Economics estimate the current third Covid-19 lockdown left UK GDP in January about 9% below the level seen before the pandemic in February 2020.

The government mandated that non-essential retailers won't reopen until April 12 at the earliest, and most services providers until May 17.

Nevertheless, economists at Pantheon Macroeconomics say UK GDP still should be about 3.0% higher in March than in January; lower virus levels will boost mobility. They add the reopening of schools also will directly boost GDP and enable some parents to work again.

"The government's decision to reopen schools in England for all age groups from March 8 should kick-start a strong rebound in GDP," says Tombs.

Pantheon estimate the reopening schools should directly boost GDP by one percentage point, by raising output in the education sector. They forecast GDP will rebound in the second quarter and anticipate a 5.5-to-6.0% jump from the first quarter's level.

Capital Economics forecast that the extra economic activity from the reopening of the economy will lift total GDP to about 2-3% below its pre-pandemic level by July.

They think the lockdown easing roadmap will allow the economy to climb back to its February 2020 level late this year and to the same level as in the fourth quarter of 2019 by the first quarter of 2022.

"Households may use some of the savings they have built up during lockdowns to fund a sizeable spending spree on pubs, restaurants, concerts and holidays. If so, the economic recovery would be even faster," says Dales. 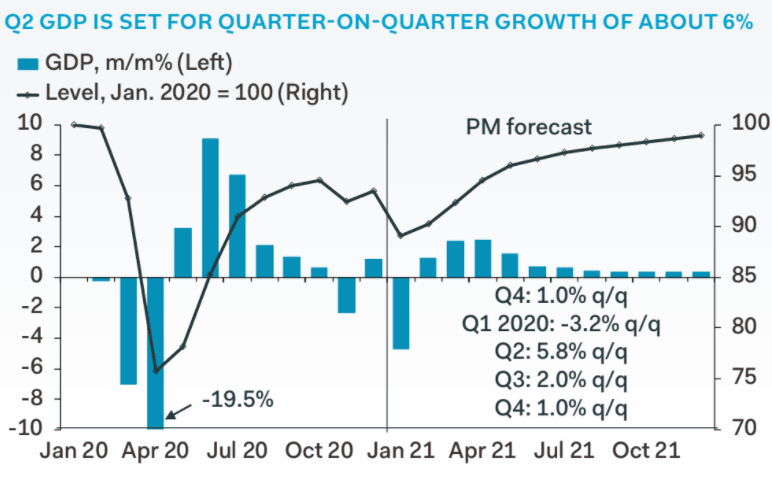 Optimism that the targets are achievable have been bolstered by data showing one in three adults had now received a first vaccination, and that the government was bringing forward its vaccination timetable and hopes to offer a dose to all UK adults by July.

In addition, the first 'real world' data on the UK Covid vaccine rollout suggests the two vaccines being deployed achieved a significant impact on stopping serious illness, according to research released on the day the roadmap out of lockdown was announced.

A Public Health Scotland study found that by the fourth week after the first dose of either the Pfizer or AstraZeneca vaccines, the risk of being admitted to hospital had been reduced by 81%.

The results were "very, very" impressive by lead researcher Proffesor Aziz Sheikhand, who added both vaccines were working "spectacularly".