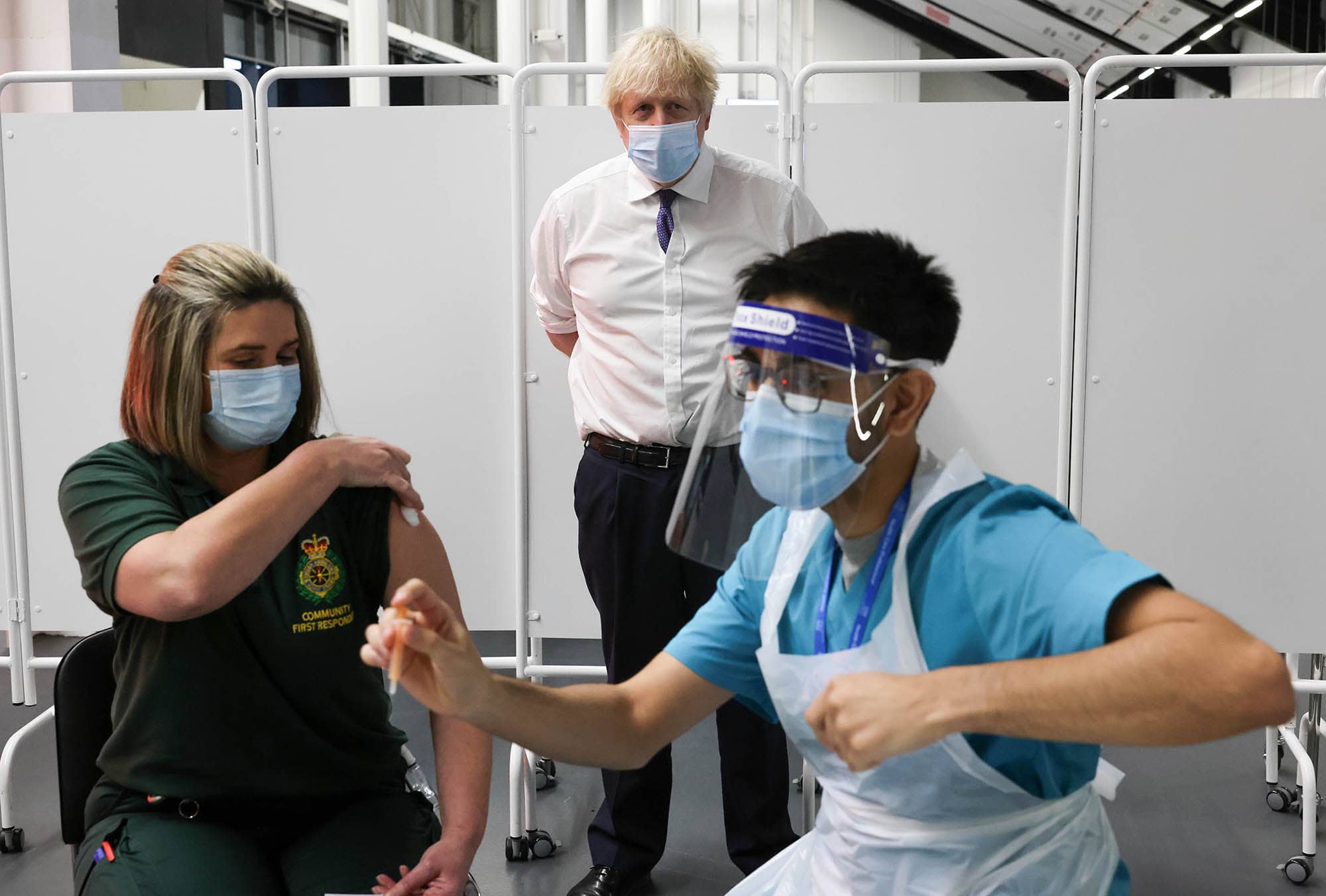 Above: The Prime Minister Boris Johnson visit's Ashton Gate Stadium in Bristol, which is one of the seven mass vaccination centres now opened to the general public. Picture by Andrew Parsons / No 10 Downing Street.

The British Pound reached a new 8-month high against the Euro and Dollar but has since retreated and looks softer ahead of the weekend, but analysts say the currency will stay well supported amidst a combination of rising global markets and a strong vaccine rollout in the UK.

"Another day, another high for the U.K. pound which touched its strongest since May 2018 against the greenback. Sterling is shining amid fading prospects for Britain to resort to negative interest rates," says Joe Manimbo, Senior Market Analyst at Western Union.

1) Rising or falling stock markets stock markets: A growing correlation confirms the UK currency is reestablishing a positive correlation with broader risk trends now that Brexit has faded as a prime driver for the currency.

The decline on Friday matches a broader turn lower for global stock markets which traded in the red during the Asian session following a sell-off late in the U.S. session overnight, and Europe looks likely to follow suit.

The Pound could end the week on a dour note if markets fail to make gains. 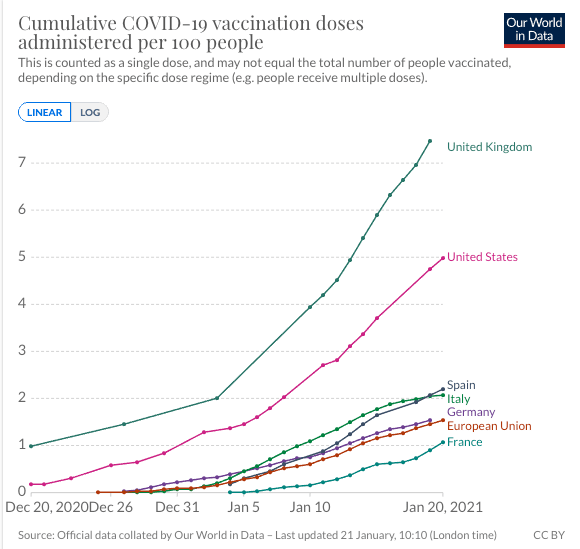 Above: In the race to a sustainable unlocking, vaccination rollout matters. Graph shows rapid pace of UK rollout relative to EU and US.

2) The UK's rapid vaccine rollout relative to the U.S. and, most notably the EU, should remain a source of support.

"Sterling hits 8-month high against Euro as UK continues to pull ahead in the vaccine race," says John Meyer at brokerage SP Angel. "The UK’s faster rollout of Covid-19 jabs is leading to hopes that the UK will recover at a faster pace once immunity is established."

Should growth and confidence improve owing to vaccinations, expectations for negative rates could recede further and prove supportive to Sterling.

"The UK is fourth highest in the world in terms of proportion of population vaccinated, while the EU plays the blame game as countries begin to see delivery shortages of the Pfizer vaccine," says Meyer.

The UK has administered 5,437,284 doses of a Covid-19 vaccine as of Thursday with 366,919 new doses being administered in the 24hr period leading to Thursday afternoon. 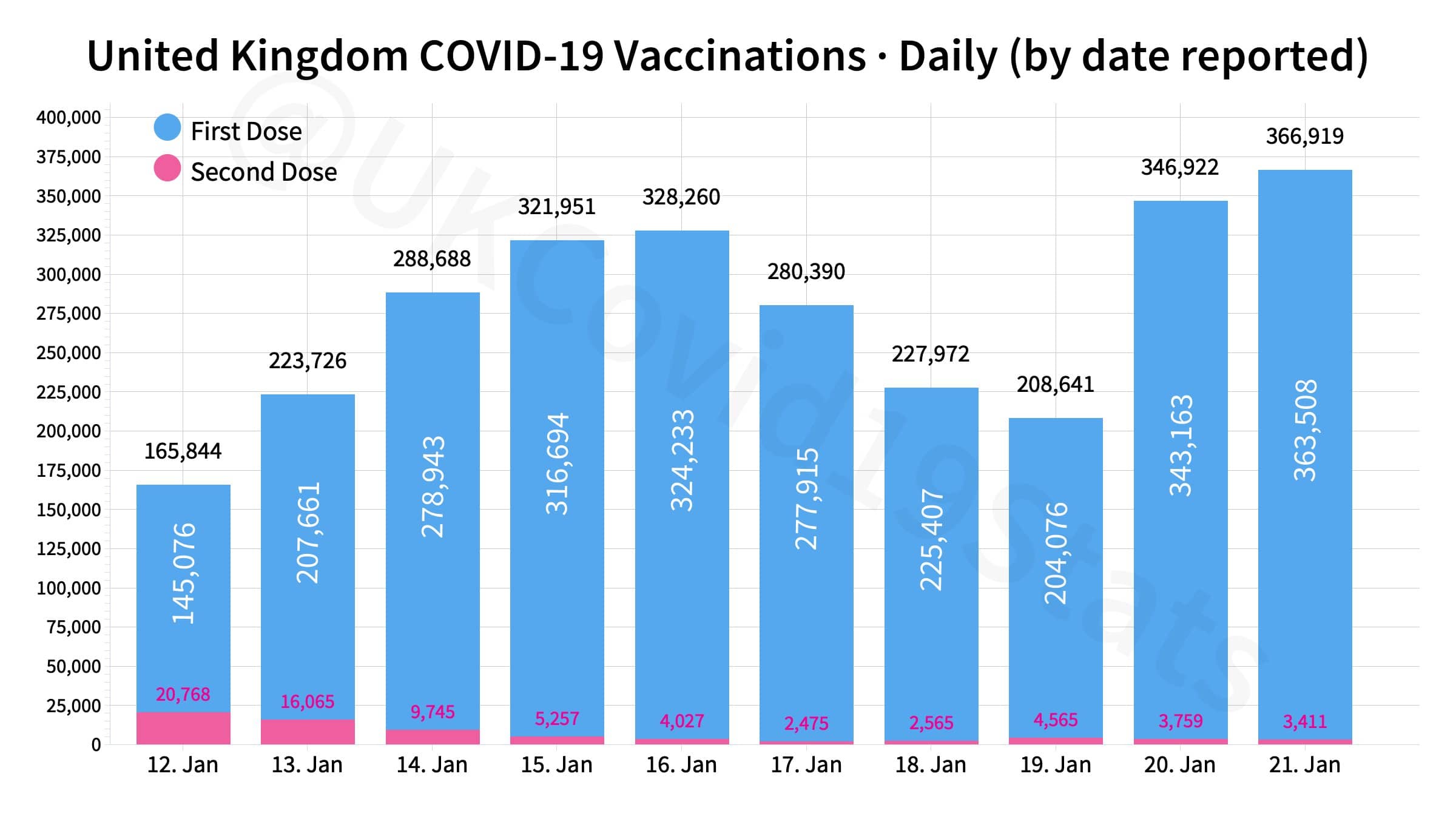 "Trading appears to be boosted by improving GBP sentiment and the currency breached a major technical level against the Euro - 1.1280 - as the UK rolls out vaccines at an impressive rate and the post-Brexit picture is at least clearer," says Joe Tuckey, an analyst for Argentex Group.

Projections show about 350K people must receive their first jabs every day if a mid-February target whereby all the most vulnerable are vaccinated is to be achieved.

It is expected that from this point restrictions can start being eased in a more sustained basis, which would allow for a more enduring economic recovery.

"Sentiment towards the British currency has certainly shifted and the idiosyncratic issue of Brexit is fading for now, although border challenges and a deal on financial services are still unresolved. Nevertheless, speculative traders are adding to their 'net-long GBP' positions – which means the market has turned more positive towards sterling’s future valuation," says George Vessey, UK Currency Strategist at Western Union.

"GBP/EUR is on the cusp of a potential breakout higher if it overturns the €1.13 handle with conviction this week. Such a move could drive the currency pair into the €1.14-€1.16 range before quarter-end. EUR/USD remains supported near $1.21 for now but could fall towards $1.19 over the next month if the Euro is talked down by monetary officials," adds Vessey.

Broader market sentiment also matters for the Pound, with some analysts saying the currency is once again showing a positive correlation with investor sentiment and is therefore rising when stock markets rally.

A foundation of the improved sentiment in the broader market is the instalment of the Biden administration, which has promised a near-$2TRN covid support package that is expected to underpin growth in the world's largest economy.

The package is expected to involve a cheque to every American to the value of $1400.

Analysts say that this extra money could find its way into the markets, thereby providing a retail-driven bump.

Should markets continue rising, so too could the Pound. "Sterling may continue to strengthen on Joe Biden’s message of unity and optimism. Biden’s first call as President of the USA is to the UK consolidating the Special Relationship shared between the two nations," says Meyer.

"Sentiment towards the British currency has certainly shifted and the idiosyncratic issue of Brexit is fading for now, although border challenges and a deal on financial services are still unresolved. Nevertheless, speculative traders are adding to their “net-long GBP” positions – which means the market has turned more positive towards sterling’s future valuation," says Vessey.